River City Ransom does something the average brawler tends to avoid like the plague and inserts light RPG elements into the usual kick-n-punch mechanics. On one hand, this adds a certain amount of depth to the game; after all, buying various foods, books and articles of clothing in order to improve your character's stats and make them more powerful isn't the sort of thing you'll see Mike Haggar doing in any of his Final Fight outings. On the other, any legitimate attempt to bulk up your guy will turn this into a boring exercise in domination on at least the Normal difficulty. Making this issue more noticeable is the simple truth that Technos makes it really, really easy for people to smash through everyone quickly -- all they need to do is figure out what goods are the best to buy and what locations are the best to camp at until the necessary money has been beaten out of punk kids.

You'll control one of a pair of high school students (Alex and Ryan) who are seeking to rescue Ryan's girlfriend from a teenage gang leader who's set up shop in another high school on the other side of town. In your way stand every single teenage street gang in town, one of which will pop up on virtually every screen of the game. If you walk somewhere and aren't immediately accosted by guys in "The Frat Boys", "The Internationals", "The Cowboys" or one of another half-dozen or so gangs, you're likely taking a break in one of River City's many shopping malls. Here, you can buy all sorts of things with the money collected from fallen gang members. Most items will increase one or more stats, while certain books will give you special techniques to make fighting easier.

You can start to break the game in the very first mall, located after passing through a whopping two screens of enemies. Here, you'll find a bookstore where you can buy books to turn your simple punches and kicks into three-hit combos, capable of felling most regular enemies with one tap of a button. If you're taking damage in combat, a particular food item not only restores health, but adds to your defense stat, making you more likely to absorb attacks without taking damage. As I progressed through the game and my defense improved, I noticed that I was frequently blocking not only melee attacks, but also the various weapons gang members would swing or throw.

If you're like me and prefer the kick to the punch, you'll be glad to know that by buying a certain food item in the second mall, you'll add points to that stat, as well as health. A bit of work in this area will get you to the third mall, where you can buy footwear capable of raising kick to its max, making it child's play to tear through just about everything. The main challenge for me when playing River City Ransom was simply surviving the trek between the second and third malls, as you have to travel through many screens and the easier gangs are weeded out in favor of ones that cause a lot more damage when their attacks connect. Lose your rhythm against The Generic Dudes and your life meter will barely notice; do so against The Squids and you'll quickly find yourself sent back to the last mall you reached, but with only half your money (the penalty for falling in battle).

You also have to fight about three or four bosses during that trek, but those guys don't really add to the difficulty thanks to some shoddy programming. Whenever you encounter one, they will threaten you and until that text leaves the screen, they will not move. This allows you to waltz up to them and blast them with a combo. From here, two things may happen. Either they'll get up and block your next attack, forcing you to actually risk damage while fighting themor you'll constantly bludgeon them until they admit defeat and add their money to your stash. Even if you wind up in a real fight, things usually aren't too difficult. Screens have depth to them and your foes' strategy tends to get no more advanced than "get in a line with you and start fighting", so all you have to do is move up or down and start pummeling when your victim--I mean opponent--walks into your range. If they get block-happy, just move again and wait for them to force the issue until you've won. Its as easy as 1-2-3! 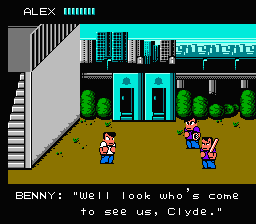 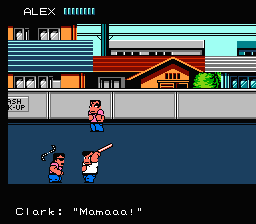 This brings us to the sad saga of Benny and Clyde -- a.k.a. How I Got The Money To Buy Whatever I Needed. These two losers team up to fight you at two separate points in the game. Neither of the pair is much more durable than the average loser gang member, and they are located right next to malls in both places you find them. Bosses also regenerate in this game, so after pounding them, you just have to walk off their screen and then back onto it in order to trounce them again. When I was fighting them outside the second mall, both guys took a mere two combos to beat, making for very easy fights. Later in the game, after I'd maxed out my kicking stat, I ran into them again. This time, it only took one combo for each of them, meaning that they'd both be out cold before even moving. That makes "easy as 1-2-3" seem mind-bogglingly difficult in comparison!

Their defeat also provided me with the money I needed to purchase enough healing items from the local drug story to carry me through the games remainder. None of the final few bosses gave me any real trouble, but the final groups of gangs were capable of getting a few hits in here and there (especially if the first thing you see when you walk onto a screen is someone sprinting directly at you while brandishing a lead pipe). Sometimes, especially when dealing with the toughest gangs, one hit can turn into a bunch, as they'll constantly pick you up and throw you after knocking you down until your health is all but depleted. Still, once you have an idea of what's going on, there's very little challenge to River City Ransom, as the game is very easy to exploit.

The main calling card of this game is its bizarre charm. It's hard not to chuckle at some of the goofiness present in River City Ransom. When you eat food in a restaurant, you'll watch your character scarf down the meal and the plate it came on in one giant bite. Taking a trip to the sauna gives you an 8-bit bare-ass shot of your hero toweling off (to go with health recovery). Oftentimes, defeated foes fade off the screen while exclaiming "BARF", while the end of the game explains that all the teenage gang members you'd been beating up for hours reformed to become honors students. Good for them (even if I do fear for the future prospects of poor Benny and Clyde after stealing all their tuition money)!

River City Ransom is a good game, as long as you're looking for nothing more than dumb fun. It's not a particularly technical brawler and by taking advantage of its main draw and going all-out upgrading your character, you'll quickly bleed the challenge from it. Still, its pretty fun. The game doesn't take itself all that seriously and there is a definite progression as you walk through the town from bridges to factories to underpasses. It's a decent romp from one end of River City to the other -- there just isn't enough meat to make me want to take that stroll all that often.
3/5

If you enjoyed this River City Ransom review, you're encouraged to discuss it with the author and with other members of the site's community. If you don't already have an HonestGamers account, you can sign up for one in a snap. Thank you for reading!

© 1998-2021 HonestGamers
None of the material contained within this site may be reproduced in any conceivable fashion without permission from the author(s) of said material. This site is not sponsored or endorsed by Nintendo, Sega, Sony, Microsoft, or any other such party. River City Ransom is a registered trademark of its copyright holder. This site makes no claim to River City Ransom, its characters, screenshots, artwork, music, or any intellectual property contained within. Opinions expressed on this site do not necessarily represent the opinion of site staff or sponsors. Staff and freelance reviews are typically written based on time spent with a retail review copy or review key for the game that is provided by its publisher.