Some games don't love anyone. Some of them are even calculated, cold-hearted bastards with no greater aspirations than to make gamers swear as loudly as possible. Then you have games like Starship Hector, whose beauty is so profound that it's hard to believe how ugly the game can be. It first tantalizes you with a solid preliminary stage. You scroll vertically, dodging a hailstorm of bullets. A hailstorm! In level one! Unlike some early NES shmups, you can tell right away this one knows what it's doing. A minute into the game, it tosses a bizarre menagerie of mutations at you, from giant crayfish with gelatinous bodies to wiggling robots that birth smaller, peskier versions of themselves. Despite having to learn to weave around obstacles so early in this game, the first stage is not only doable, but challenging and exciting. What's more is the presence of a life bar on the left side of the screen, and areas where you can refill your health by feeding bombs into certain statues. It's like the game's telling you to settle down and enjoy the ride, that you aren't well and truly boned.

When you reach the first boss and the glorious BGM of the first stage gives rise to a villains ditty, you first think, "Okay, NOW I'm going to die." Eight side cannons surround two strafing turrets, with each of the two tossing four spiraling bombs through the air in a straight line. It may look like an elaborate battle, but the first boss is a cake walk. If you fly to one side, the four cannons on that side will not fire. That leaves you with only four shots to dodge, coming at you at a moderate speed. The two turrets in the middle are no threat, since their bombs only fly in a straight line. With speedy bomb-dropping and basic maneuvering, the boss falls with little resistance. Relish in your mad skills while you can. Oh yes, and relish good. Soon you'll know true suffering. 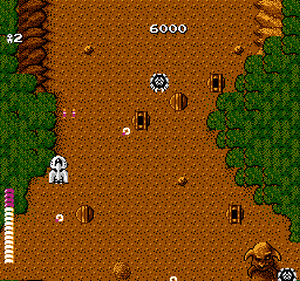 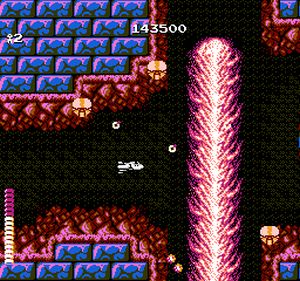 The first level, called "History 1," is pretty much a tutorial stage. The main concept the game wants to impress upon you is the importance of utilizing both your main cannon, which hits flying enemies, and your bombs, which hit ground enemies. By "utilizing both," I don't mean "one or the other, depending on the situation." You will learn to tap both 'A' and 'B', and do so rapidly. There's no other way to wipe out a swarm of flying enemies accompanied by several ground cannons, each one firing at you. It may seem like too much to take out a swarm of ships coming at you when you have to dodge four to eight bullets at the same time AND manage to take out the cannons to prevent further shots, but damn it, that first stage will teach you to do so, and you'll love it.

Love it so much, in fact, that when you get to stage two you won't be able to quit. Even when Hector has twisted your head completely around and begun to flog you with a spiked paddle, you won't want to quit. On the second stage, the game switches perspectives a la Life Force. Now you're blasting things horizontally, still expecting the game to continue its difficult-but-doable streak. Sure, History 2 is doable, but not without tons of practice and lots of swearing. This is where the game's trickery becomes evident. So many enemies and projectiles come at you now that you will summon the utmost memory, patience and concentration. If even your house creaks while playing this stage, it may distract you and cause you to run into an oncoming creature. To make matters worse, your life bar is next to useless. Bullets still cause damage rather than kill, but run into most of the enemies here and it's curtains. If you don't instantly die, you'll be left with a single life point.

For those of you willing to test your mettle, you will find worthwhile rewards. In most shmups the rewards are seeing awesome environments or fighting worthy bosses, but not the case here. Each stage shows elaborate planning and masterful placement of enemies. You'll notice certain beasts creep out right as you come to a life restoring device, forcing you to choose between restoring your life or dodging a shot. Sometimes those restorers are there as bait. You learn this in the fourth stage when you begin to use one, only to be hit by an unexpected enemy that just happens to line up perfectly with the restorer.

Memory alone will not save you. There are certain enemies called sickers, which are basically spiked grenades that send bullets in every direction when they explode. These guys are the most common enemy, and they don't always explode in the same place. Because they could explode anywhere, there is no guaranteed safe position in any vertical level. Hector definitely tries your reflexes, keeping you on your toes and also deeply engaged. 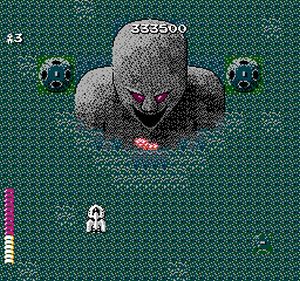 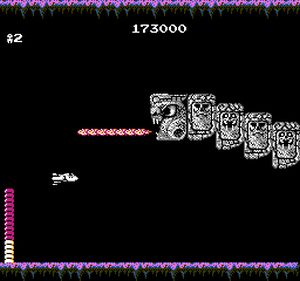 Hector is still not a perfect shmup. We could have done with better environments, for instance. While the visuals do look gorgeous in their own right, there's really not much to look at. You fly across basic landscapes, see basic temples, blast enemies in the innards of basic ruins, and even fight basic bosses. Many bosses look lazy, and you'd think that with such an impressive and well-designed array of enemies that the bosses would look killer. Instead you fight creations like the Atlan Commander in History 3, who looks like a giant, partially submerged gingerbread man with a face provided by a seven-year-old. He looks more like the kind of boss I would expect in a Sachen title, and not from the likes of Hudson Soft.

This is all assuming you can get to the later levels. The game eventually becomes ridiculously challenging, especially when fighting Easy Gorem (which I think is a mistranslation of 'golem'), the boss of History 4. You fight this guy in a horizontally scrolling stage, and the battle definitely takes advantage of that. With every step Gorem takes, blocks fall from the ceiling. Not only do you have to dodge those while shooting him, but you also have to keep an eye out for a line of bullets he occasionally belches. On top of all of that, it's difficult to tell where exactly to hit him. No part of him makes noise when shot, and you essentially wind up shooting his whole body and hoping for the best.

When you're done having your face broken, you can retire the game to its shelf. Only there can it be safely adored without the risk of keeling over from a major coronary. Unless you're a shmup die hard, you'll likely have a strange affair with this title. Every part of you tells you to hate it, but it's so solidly designed that you can't. Therein lies the masochist's conflict: I love it, but it hurts, but I love it, but...
4/5

If you enjoyed this Starship Hector review, you're encouraged to discuss it with the author and with other members of the site's community. If you don't already have an HonestGamers account, you can sign up for one in a snap. Thank you for reading!

© 1998-2020 HonestGamers
None of the material contained within this site may be reproduced in any conceivable fashion without permission from the author(s) of said material. This site is not sponsored or endorsed by Nintendo, Sega, Sony, Microsoft, or any other such party. Starship Hector is a registered trademark of its copyright holder. This site makes no claim to Starship Hector, its characters, screenshots, artwork, music, or any intellectual property contained within. Opinions expressed on this site do not necessarily represent the opinion of site staff or sponsors. Staff and freelance reviews are typically written based on time spent with a retail review copy or review key for the game that is provided by its publisher.