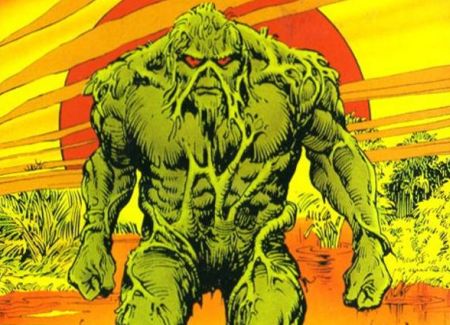 I never thought I'd find something related to Swamp Thing worse than Adrienne Barbeau's aging breasts. Through the magnificent sleuthing skills I've acquired from years of being a huge B-movie fan, I found something to top that: a Swamp Thing NES game developed by Imagineering--the creative minds behind The Simpsons games of yore! The connections to the maligned license franchise don't stop there. Not long after inserting this obscure little number did my heart leap with recognition. It wasn't the pleasant little flutter that people with a soul call 'love,' but the other leap that might have been the onset of a myocardial infarction. Swamp Thing not only cannibalizes sound effects from Bart vs. the Space Mutants and the like, but also its wonky engine and punishing sense of difficulty.

Oh, but that's not all. It somehow takes an already faulty system and makes it worse.

Swamp Thing is a platformer. You run from point A, making tricky jumps and punching horrific mutations in an attempt to find point B. There's nothing complex about a licensed platformer, and I'm totally okay with that. It's not the basic concept behind Swamp Thing that goes awry, but its implementation. Taking your first step is entrancing, in that you become paralyzed by the incredulity of watching how ungodly slow our titular hero moves. He walks as though he's wading through waist-deep fine sand. This not only kills the pace right off the bat, but also creates a lot of unnecessary issues. For instance, early on in the game are enemies that bounce up and down; a basic platformer trope. Normally you would time your step and walk underneath them as they ascend. Try that here and you will always take damage.

Oddly enough, Swamp Thing can jump faster than he can walk. It's only by leaping that you can get past situations that demand speed. Before you shoot me an email, understand that I realize you can run in the game. It's achieved by holding down the jump button. No, you didn't read that wrong. Imagineering decided to be counterintuitive in a platformer by assigning 'run' and 'jump' to the same button. Thankfully, there are very few scenes where you actually need to run before jumping. When those few scenes do arise, though, be prepared to swear in a deep, gruff voice until you cough up blood.

Platforming is not only tricky, but sometimes awkward or cheap. The chemical plant has some decently fun sequences where you leap from valve to valve while dodging corrosive drops. While these scenes comprise some of the best parts, they're really nothing special. It only becomes certifiably irritating when hooks appear amidst the valves. When you leap on a hook, it will begin to fall. You have to leap the instant you land on it, or else you will plummet with the hook. That's assuming the game allows you. There are times when I've managed to nail the jump button while obviously on a hook, yet Swampy won't move. Instead he resigns himself to his fate and takes a plunge off the screen. There are even times when the game glitches and doesn't spawn a platform, leaving you stranded with no alternatives but attempt to backtrack or kill yourself.

Other areas introduce strange jumps. At one point in the swamp, there are pitfalls with a slightly isometric view to them. Because of this, it's difficult to know where the actual edge lies. You'll find yourself jumping too early or too late, usually taking another plunge. Even when you do figure out when to jump, flying skulls surge up out of the pit and nail you. You just can't win!

Even though Swamp Thing is a platformer, some of its most challenging scenes don't involve jumps. A lot of scenes force you to rely on memory. There are several where enemies or traps will appear when you're right next to their spawn point. You would have no way of knowing they were there without running into them in a previous session. In the first stage, for instance, are robotic fish that jump out of the swamp water right as walk next to them. Without knowing of their presence and acting with caution, you will walk right into all of them and lose massive amounts of health.

Dealing with enemies is not a matter of deft jumping and skillful dodging. More often than not, enemies will rush at from awkward angles. Thanks to stilted play mechanics, you'll usually wind up taking damage. You could punch them, but some of them (the skulls in the second part of the swamp come to mind) are impervious to damage. Others move low to the ground and can't be hit. You might think to duck and attack, but doing this causes Swampy to stand upright and punch instead. Situations like these become even worse when you're overwhelmed by sheer numbers, as sometimes enemies will approach from both sides, some invincible and others not. Trying to take out flying enemies is an especial pain in the ass. If you leap forward and attack, Swampy will stop in midair as if he's hit an intangible wall and fall straight down. A lot of the time, it's either into a pit or onto another enemy or trap.

You can probably tell what I'm building towards. It's something I'm always afraid to admit, but I must in this case: Swamp Thing is too damn hard! It's not enough that the game is cheap, but there are no continues or passwords. Some games are just fine that way, but Swamp Thing is an incredibly long game for a basic platformer. There are some parts of stages that will take you twenty minutes or more. One playthrough can take hours unless you're incredibly skilled. Even then, that's hours of dull combat and jumps.

I will say, in Swamp Thing's defense, that it at least showcases great 8-bit visuals. Environments are very well colored and help build great atmosphere. I especially enjoyed the areas after the chemical plant, punching my way through a dark forest full of mechanical monstrosities. After that was a desolate toxic waste dump that resurrected some other great B-movie memories.

Ultimately, though, Swamp Thing is yet another overly difficult and painfully uninteresting platformer churned out by Imagineering to hype a Saturday morning cartoon. My guess would be that the developers had no appreciation for the source material, and just wanted to be done with this project so they can move on to bigger and better things. I mean, who rehashes an engine from a poorly received game? That in itself shows the developers' lack of interest in the title. As I've said before, fans deserve better than this.

If you enjoyed this Swamp Thing review, you're encouraged to discuss it with the author and with other members of the site's community. If you don't already have an HonestGamers account, you can sign up for one in a snap. Thank you for reading!

© 1998-2020 HonestGamers
None of the material contained within this site may be reproduced in any conceivable fashion without permission from the author(s) of said material. This site is not sponsored or endorsed by Nintendo, Sega, Sony, Microsoft, or any other such party. Swamp Thing is a registered trademark of its copyright holder. This site makes no claim to Swamp Thing, its characters, screenshots, artwork, music, or any intellectual property contained within. Opinions expressed on this site do not necessarily represent the opinion of site staff or sponsors. Staff and freelance reviews are typically written based on time spent with a retail review copy or review key for the game that is provided by its publisher.