There were some 8-bit displays of ruggedness and machismo that seemed too awesome to dislike. To do so was to put your masculinity under scrutiny. You had to hide your Popples when your friends came over and pop in a game like Bad Dudes, then hope they didn't look under your bed. When they left, you could drop the facade and go back to secretly despising Bad Dudes and it's utter failure to measure up to better brawlers. That and snuggling with your Popples.

The way I see it, all of the bulging muscles, legions of ninjas, tough crew cuts, and sweaty men are a smokescreen. Data East must have hoped that the burly presentation would hide how truly vapid the game was. Each stage devotes itself to showing off as little as possible while attempting to overwhelm you with various ninja sprites (some of which are recolored) ad naseam. There's nothing complex about the level designs. You advance to the right, see the same dull background for less than a minute, punch ninjas to death, and eventually arrive at a boss battle. Truly, this is all a macho game would need to do to be passable, but the devil is in the details.

In order to deliver an effective knuckle sandwich, you have to get within handshake range of your opponents. This is a given in any brawler. In order to take out your opponents, you must make yourself vulnerable. However, Bad Dudes takes this policy a step too far. By simply colliding with enemies, you lose health. There's a reason most brawlers don't do this. Part of surviving a brawler, or any game really, is being able to preserve yourself despite having leave yourself open. There should always be an out, a strategy or situation that allows you to play flawlessly. You usually learn this through observation and practice. Though you can take out most ninjas without being touched, there are so many of them that losing a life is usually guaranteed. It's even worse when one slips past your well-timed punch and brushes past you, softening you up for the next boss. It happens a lot, too. 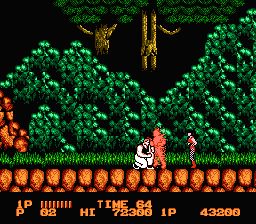 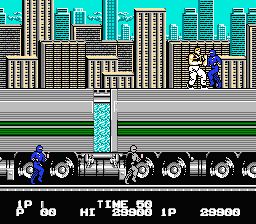 The boss lineup is certainly interesting, featuring a guest appearance from Karnov, a miniature ninja with prong-like claws, an armor clad giant, and a monk armed with a bo. I wish I could rattle on about how intricate these battles are, demanding the most of your patience and wits. I would have loved a fight where you wait for an opening and strike with a fast combo, only to leap away at the right moment; something that would require you to observe your opponent and know his style. Unfortunately, all you need to do in most battles is make it there with a weapon and mash the attack button. Where this game could have made up for some of the wonky mechanics and dull stages by providing boss battles of worth, it instead continues its spree of tedium by demanding very little of you.

It's upon beating a boss that the money shot comes. Your "bad dude" raises his arms in triumphant victory and cries out in a voice not unlike someone swallowing sand and broken glass: I'M BAD! Yes, yes you are.

Though the game sports an impressive rogues gallery, with many different species of ninja (even featuring one guy who attempts to kill you by lighting himself on fire and running at you), the dull combat makes every enemy included moot. Each enemy should call for a change in pace or strategy, but all you need is a punch or two to alleviate yourself of each ninja menace. You could execute a different attack from library of maneuvers, like a flying kick, a spinning roundhouse a la Chun Li, or a burning fist, but why bother? Basic attacks get the job done just as well, and some of the special stuff leaves you even more susceptible to damage. So you wind up relying on basic attacks.

The true heart of the problem with Bad Dudes is that it's incredibly boring. I don't know how, but Data East managed to take something that looks awesome and turn it into a burly snoozefest. Mostly because the game is more repetitive than most brawlers from its time, and much less exciting as a result. Bad Dudes may exude machismo like beer-dipped bacon wrapped around a bloody ribeye steak, but good gravy is it dull!
2/5

If you enjoyed this Bad Dudes review, you're encouraged to discuss it with the author and with other members of the site's community. If you don't already have an HonestGamers account, you can sign up for one in a snap. Thank you for reading!

© 1998-2020 HonestGamers
None of the material contained within this site may be reproduced in any conceivable fashion without permission from the author(s) of said material. This site is not sponsored or endorsed by Nintendo, Sega, Sony, Microsoft, or any other such party. Bad Dudes is a registered trademark of its copyright holder. This site makes no claim to Bad Dudes, its characters, screenshots, artwork, music, or any intellectual property contained within. Opinions expressed on this site do not necessarily represent the opinion of site staff or sponsors. Staff and freelance reviews are typically written based on time spent with a retail review copy or review key for the game that is provided by its publisher.