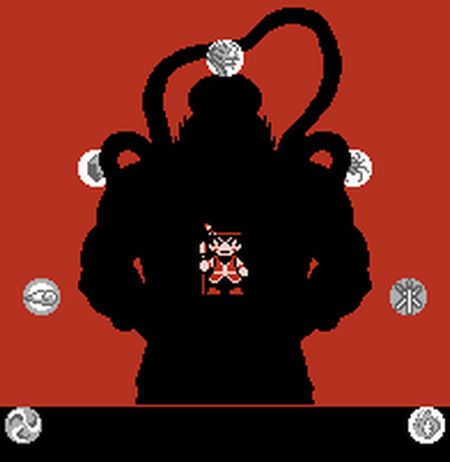 Although Whomp 'Em has taken flak for cloning Mega Man outright, it was an understandable move. It wouldn't have made any sense for Jaleco to reinvent the genre. By that point in the NES's life, there was only so much that could be done with platformers. Further evolution would either mean having to spend way too much time developing a simple game or trying out counterintuitive ideas. Neither of those options have a high chance of success.

So Jaleco borrowed Capcom's concepts. The likeness becomes recognizable after you've completed the introductory stage. Six new selectable levels appear, each with a different theme and landscape. You guide the protagonist, an intrepid Native American warrior armed with a spear, through each short stage built of standard platformer fare. At the end, you spear a boss to death and learn a new ability which can be used to make certain areas of the game easier. You can even secure magic lamps that restore your health when it's fully depleted, like the E-tanks from Mega Man. 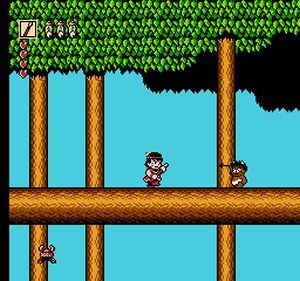 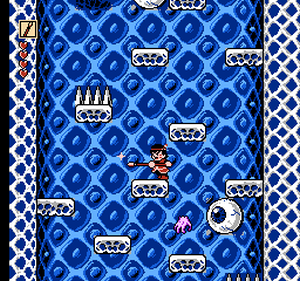 Jaleco didn't want a perfect mirror of Mega Man. Also understandable. However, some of the concepts they nixed would have worked in their favor. For instance, you can't sit on your magic lamps or choose not to use them. Their usage is automatic, even if you'd rather save it for a more dire situation. The developers also saw it fit to not include an ability selection menu. Maybe they thought this would streamline the process, but it only serves to annoy. Instead, you have to cycle through each attack. It's a real pain when you accidentally pass the ability you want, leaving you to cycle through them again. It's an even bigger pain if you pass the ability more than once and wind up losing a ton of health or dying. The game doesn't wait for you to make a selection. It goes right on kicking your teeth in while you're busy cycling.

You might remember the key feature of Mega Man, that every boss has a weakness to a certain weapon. I wish I could say the same about Whomp 'Em, but there are a few bosses that have no weakness at all. This becomes evident when you see the abilities that some of the bosses bestow unto you. I remember gaining one ability late in the game and thinking that I'll finally be able to punish one of the harder bosses with my new power. So I battled my way to the guy, a giant frog with a cape, and unleashed my new weapon!

A cloud? Oh, maybe it's a poisonous gas that'll choke him to- nope, it's going right through him. Well crap.... I then proceeded to die.

This wouldn't be such a big deal if not for two factors...

Bosses have very intricate patterns and move quickly. There's one boss that can best be described as an anthropomorphic cannonball. This sucker bounces all over the screen in tight little zigzags and moves faster than any enemy in the game. Dodging his attack is tricky, and sometimes boils down to luck. At the end of a bounce session, he fires a pair of rocket fists at you. These can be easily dodged when they first approach, but usually wind up hitting you as they speed back. You get little time to react. The best method I found against this guy was to try to farm magic lanterns and hope for the best.

Whomp 'Em doesn't feature the best of controls. No, they're not horrible or broken, but they are unrefined. Precision is a big factor in this game. There are a few jumps where you must leap right at the final pixel, especially in the final stage where you're bouncing around on clouds. Ther'es one really wide pitfall there that's almost impossible to hit, and usually requires the aforementioned cloud (which acts like Rush Jet). One situation that really annoyed me involved using leaves as springboards. It seemed inconsistent as to how high or how far each leaf would throw you, but I noticed that it came down to timing. With less-than-tight controls, I wound up biffing most of the jumps. Precision is especially a huge need against bosses, who give you little time and space to react. In a few cases, I found it easier to power my way through rather than try to be skillful about it. 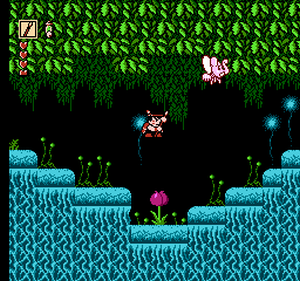 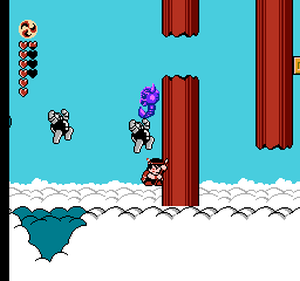 Many of these were great ideas. They just didn't work out on paper. So what did? Although each stage is fairly simple, they were mostly enjoyable. Even some of the tough bits like the aforementioned leaves were only minor impediments. I loved jumping over the crates of TNT in the mines or diving blindly down a frozen abyss while dodging disembodied hands. I actually liked the concept of gathering gourds to increase my maximum health, even if it was a cheap concept. Hey, I see it as an apology for not providing flawless controls.

There were some boss battles I genuinely enjoyed. I remembering squaring off against an ugly creature that fell from the trees. I couldn't quite tell what it was at first, but my gutter mind thought I was battling a giant scrotum with eyes. After learning its pattern and pummeling the beast, it turned into a giant moth that flew all about the screen. Although the second form was tougher and faster, it was still doable, and still an exciting brawl.

I loved the little touch in the cannonball-man's stage involving bas-reliefs with his likeness on them. I found them all over the stage, and it smacked of narcissism. It made me despise the little creep all the more, and sweetened his eventual defeat.

I do ultimately like Whomp 'Em. I just don't love it. There's too much about it that could have been better. Copying an established name makes sense, but turning out a sloppy copy doesn't. If you're going to rip someone off, then do your best to refine their work. Show a rival company how it's done! If you're just going to crank out an imperfect clone, then why bother?

Oh well, at least Jaleco did a better job of ripping off an established title than Sachen ever did.
3/5

If you enjoyed this Whomp 'Em review, you're encouraged to discuss it with the author and with other members of the site's community. If you don't already have an HonestGamers account, you can sign up for one in a snap. Thank you for reading!

© 1998-2020 HonestGamers
None of the material contained within this site may be reproduced in any conceivable fashion without permission from the author(s) of said material. This site is not sponsored or endorsed by Nintendo, Sega, Sony, Microsoft, or any other such party. Whomp 'Em is a registered trademark of its copyright holder. This site makes no claim to Whomp 'Em, its characters, screenshots, artwork, music, or any intellectual property contained within. Opinions expressed on this site do not necessarily represent the opinion of site staff or sponsors. Staff and freelance reviews are typically written based on time spent with a retail review copy or review key for the game that is provided by its publisher.