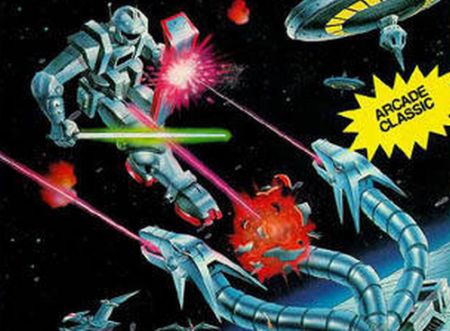 Magmax issued a silent promise the instant I gazed upon its cover art. "You will play as a giant fighting robot. You will fight a three-headed robotic dragon in space. It will be awesome." That was all it needed.

I didn't bother to soak in the other details because all that mattered was becoming a robot. I heard the music, but didn't really listen to it. I saw the environments and enemies, but didn't really pay attention to them. What played over and over again in my head was how I was going to turn this wimpy little ship into Voltron's brother. It wasn't long before I happened upon the upper half of the body. I watched in awe as it hypnotically glided toward the top of my cruiser. With a snazzy sound effect, a cross between a whoosh and snap combined with the high-pitched ting of metal on metal, the body fastened neatly onto my ship. It was only a few moments later that I found a pair of legs. At that moment, I rose in triumph and saluted the avatar of awesomeness before me. I wiped a tear from my eye and sat down to continue the game. All would be right with the universe that day.

Magmax kept its promise. It didn't need to do anything else, and it certainly didn't. 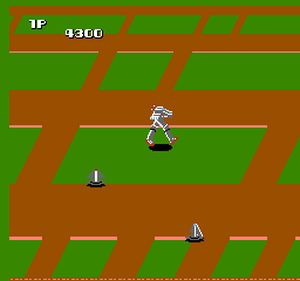 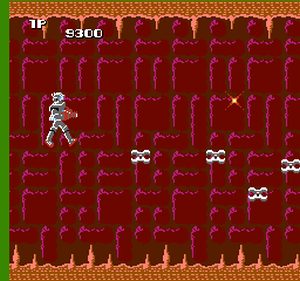 The game relied on fighting robots and mechanical King Ghidorah knockoffs because it had very little of anything else to offer. It's not for lack of trying, though. For people who weren't impressed by clashing metal titans, Magmax offered two different paths players could take. When changing to a robot lost its flavor--as it did after the first occurrence--I experimented with both pathways. What I discovered in either path was less than astounding.

The overworld offers a pseudo-isometric view. Green turf with brownish pathways covered the land, giving you the feeling you were embarking on your mission down the Yellow Brick Road. I remember the impression the visuals first left on me, that they were so vibrant and close to arcade quality that I almost wet myself. But the shock wore of quickly then, and doesn't even arise now. As you continue to scroll along, very little of the environment changes. You blast the same enemies while pushing past the same light brown paths, and boredom usually sets it around the second minute.

When you've had enough of the overworld, you can fly to the nearest porthole and check out the underworld. This is one of the game's few impressive (term used loosely) points, where it shifts from an isometic-side-scroller to a full on horizontal scrolling shmup. With a repetitive background made of blood red bricks, you fight off robotic jellyfish, winged menaces, and mechanical brains, all while dodging very few projectiles. It's down here that the game's second spell breaks. The true main attraction, alternating between two different paths, isn't what it's cracked up to be.

Whether you're above or below ground, the environments change very little. You see a whole lot of green or a whole lot of red. On the surface, you can enter the desert and see a whole lot of lifeless brown with a few stones and craters. After defeating the three-headed boss, you move onto a new stage made of endless deep blue. In an act of laziness, the developers included an ocean level that consists of a vast blue environment with nothing to break the repetition. Magmax's environments are nothing more than wallpaper. It wasn't until this game that I realized how much environments can matter in a game. If you combine the dull, repetitive background with lacking enemy arrangement, the end result is tedious, drawn out levels full of naught but the same sights and situations. 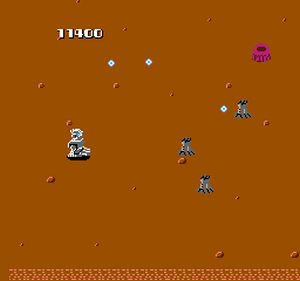 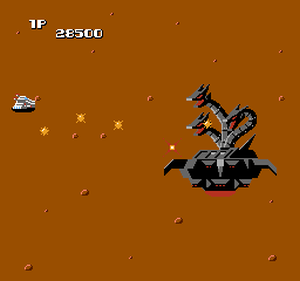 Yes, I did mention a lack in regards to enemy arrangement. Yes, I realize the enemies are quite diverse in design and moving patterns. What I'm criticizing is the way enemies appear in repetitive waves. You'll fight a lot of robotic jellyfish, followed by a wave of brains, then a wave of fish, then a wave of bow-tie-shaped ships, followed by a wave of... I think you get the picture. Enemies seldom group together and always fly in the same patterns. Because of this, dealing with any enemy the eighteenth time is exactly like dealing with it the first time. You eventually learn to shut your brain off and tap the 'B' button like a maniac while performing simple evasive maneuvers, still managing to watch whatever's in your Netflix queue and actually retain the plot without having to rewind.

There are only two things that change between the surface and the underworld: background and challenge. While above land, the game is insultingly easy. Unlike the underworld, surface enemies appear in much smaller numbers and fire even less projectiles. One thing I do find impressive is that your hit box actually changes to suit either the isometric view or horizontal view. Enemies and shots will actually fly past you in the isometric view, only causing damage if they happen to hit you just right. That means you'll lose either your legs or upper body, but only die if you have no body parts. However, that's not a realistic fear. It's almost impossible to lose on the surface, so much that it takes the game well beyond the tedium described earlier.

You could go down below and experience a semi-real challenge. Since you're in horizontal view, your hit box greatly increases. This is especially true if you have a fully built robot. At some points, it's impossible to dodge everything that comes at you, and losing body parts is inevitable. Your sprite is so big that you cannot fit between even a meager number of bullets coming at you. However, a fully built robot can decimate enemies like no other. When fully built, you can fire shots from four different areas of your body, effectively covering half the screen with projectiles. You can wipe out whole waves of enemies before even seeing what they are. It's only when you become sloppy or slow that a wave gets through and you start losing parts and lives.

Eventually, you realize that it's not worth it to play the underworld when you can achieve the same end above ground. No matter where you are, you will see the same stages over and over again as they reloop. Heck, you even fight the same three-headed boss repeatedly. Battling this sucker never increases in difficulty. He shoots the same slow-moving bullets that you can easily weave around, takes the same amount of damage to kill, and is just as easy the first time as the fourth time. Sound familiar?

There are many games like Magmax from the early 8-bit era, and even a good number on the 16-bit systems. If you dig, you can find a large assortment of games that presented you with a gimmicky idea, yet lacked substance. All they needed to do was make good on that gimmick and then hope gamers wouldn't notice the vapid world outside of it. It's as though they shot for mediocrity, and in most cases nailed the target.

Magmax is one of those games I would list as mediocre, if not for one major fault: it's incredibly boring. The game is quite stable and playable, but the burning question is would you want to play it? Needless to say, I don't trust awesome-looking robots these days. Who knew one could lead me to such disappointment?
1.5/5

If you enjoyed this Magmax review, you're encouraged to discuss it with the author and with other members of the site's community. If you don't already have an HonestGamers account, you can sign up for one in a snap. Thank you for reading!

© 1998-2020 HonestGamers
None of the material contained within this site may be reproduced in any conceivable fashion without permission from the author(s) of said material. This site is not sponsored or endorsed by Nintendo, Sega, Sony, Microsoft, or any other such party. Magmax is a registered trademark of its copyright holder. This site makes no claim to Magmax, its characters, screenshots, artwork, music, or any intellectual property contained within. Opinions expressed on this site do not necessarily represent the opinion of site staff or sponsors. Staff and freelance reviews are typically written based on time spent with a retail review copy or review key for the game that is provided by its publisher.