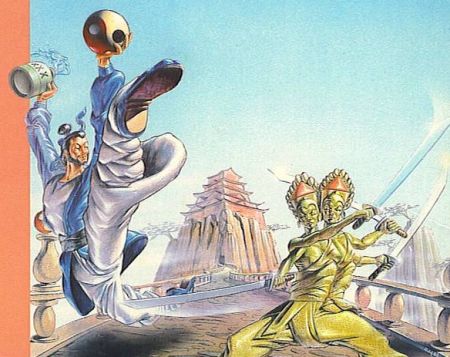 The Color Dreams moniker used to serve as an omen. When you saw that or the trademark sky blue cartridge, you knew not to touch the game. One would think that there has to be at least one diamond in the rough out of all the Color Dreams/Wisdom Tree/Thin Chen/Sachen games, and I've committed myself to finding that gem. Thus far, the best (read: least horrible) experience I've come across is Master Chu and the Drunkard Hu. It earns at least half a point for coming up with a unique title. That and for utilizing the word "drunkard."

You can tell the developers used their noggins a little more when creating this one. It isn't a low quality knock-off of a better game, nor is it horribly crippled by broken mechanics. It feels play tested to some extent. Control response is about spot on and not too stiff. So what's not to like?

Color Dreams spent most of their time stabilizing the game while developing a slightly fresh concept. I can dig that. However, there always comes that important question when a new concept arises: is it worthwhile? At first, the game appears to be your basic run-'n-gun title, only replace the gun with magic fireballs. You run to the right and obliterate stock enemies while collecting power ups. You might expect some basic platforming challenges like leaping over pitfalls or climbing ascending platforms, but they never appear. In fact, not too far from the beginning, nothing appears. The screen ends and you're stuck wondering what to do next.

Here's where the game tries to be unique. The object of each level is not to reach point B, but to jump around and collect eight yin-yangs. A few of these bad boys are sitting out the in open, easy to spot and nab. Most of them, however, are hidden throughout the stage and can only be revealed by shooting certain areas. You'll never find a yin-yang hidden in thin air. There's always some piece of scenery like a torch or a vase or a background yin-yang that denotes where a hidden item could be found.

Yeah, in every level you jump around, shoot spiders, shoot every piece of scenery, and collect yin-yangs. Different concept? Yes. Exciting? No. 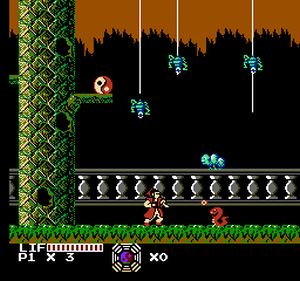 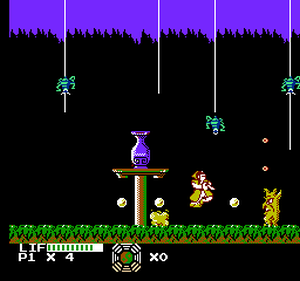 Apart from yin-yangs, you can also reveal various power ups to aid you on your quest, the most useful being a scroll that upgrades your attack to a spread shot. Armed with such powered up magic, you can cover more of the screen with projectiles and stand a better chance of uncovering other power ups. Take damage, though, and you lose your power up.

While the worst I've been able to say about this game thus far is that it's uninteresting, it's not without a few conventional flaws--mostly related to combat.

I've mentioned that the controls are responsive. What I didn't say yet is that they're also counterintuitive. Rather than obeying the genre standard--'A' for jump, 'B' for shoot--Sachen decided it wanted to do things differently. Why not? They were in the mood for going against the grain, so changing up the control scheme seemed like a good idea at the time. They didn't realize how troublesome that can be. Master Chu is a side-scrolling platformer, and it therefor profits from an intuitive control scheme. Players should be able to get right into the game, and the pace shouldn't drop. Instead, they have to get used to pressing 'Up" on the d-pad to jump, 'A' to fire, and 'B' to wave a fan at an enemy.

It took me a while to figure out what exactly the fan does. Turns out it's supposed to deflect projectiles, but it only works if your timing is spot on. What's worse is that the enemies that fire projectiles do so in a fairly rapid succession. The deflection ability can stop one or two shots, but four or five? Since you seldom have to deal with less than four shots at a time, there's really no point to using the fan.

In other words, the developers could have left the fan out, nixed using the 'Up' directional to jump, and kept the game intuitive in the first place. 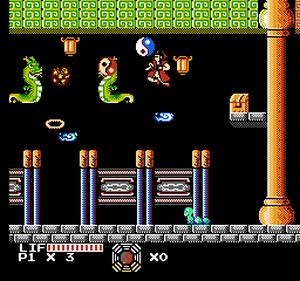 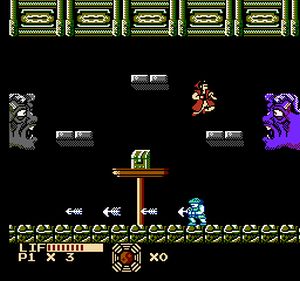 The fan isn't the only problem with combat. After collecting all eight yin-yangs, you must fight a boss. This is where we see the Color Dreams we all know and love. Bosses don't have any particular rhythm. They wander around the screen and fire projectiles at random. Your only defense against the flurry of shots is to leap over them, thanks to the useless fan. So many shots come your way, though, that you cannot leap over them without taking damage. That's when you realize it was a better idea to stay grounded and keep shooting. Every fight is a constitution battle. There's no skill required. You just have to hope you can finish off the boss quickly while taking minimal damage.

Tie all of this together and what do we get? Here's a game where Color Dreams stepped up a little bit, but ultimately fell back into their old nasty habits. They curbed their weakness for ripoffs with unstable play control, but ultimately still gave us a game that isn't at all pleasing to play. This isn't to say that Master Chu and the Drunkard Hu is abysmal. It's playable, even beatable and not too cheesy, it's just not entertaining. In a way, a statement like that is a triumph for Color Dreams.
2/5

If you enjoyed this Master Chu and the Drunkard Hu review, you're encouraged to discuss it with the author and with other members of the site's community. If you don't already have an HonestGamers account, you can sign up for one in a snap. Thank you for reading!

© 1998-2020 HonestGamers
None of the material contained within this site may be reproduced in any conceivable fashion without permission from the author(s) of said material. This site is not sponsored or endorsed by Nintendo, Sega, Sony, Microsoft, or any other such party. Master Chu and the Drunkard Hu is a registered trademark of its copyright holder. This site makes no claim to Master Chu and the Drunkard Hu, its characters, screenshots, artwork, music, or any intellectual property contained within. Opinions expressed on this site do not necessarily represent the opinion of site staff or sponsors. Staff and freelance reviews are typically written based on time spent with a retail review copy or review key for the game that is provided by its publisher.