Theatrhythm Final Fantasy is the sort of game that you might suppose was made specifically for long-time gaming nerds like me, except that Ive never really had a thing for game music. I like some of it and I dislike some, but most game music I ignore (yes, even some of the Final Fantasy stuff). So why did you buy it? I imagine someone asking right now, if only because it makes a good transition and imaginary people are helpful like that. Because something about it felt right to me, I respond, and it turns out I was mostly right.

When I started playing Theatrhythm Final Fantasy, I knew there were a number of ways the developers might mess up and potentially produce a disaster. Here is a 3DS cartridge that takes the huge catalog of classic Final Fantasy music, tosses most of it--even a lot of the best tracks--to the cutting room floor, then mixes light RPG elements with rhythm play mechanics and calls it a day without leaving anyone enough time to mourn the absence of some spectacular compositions. Most of the excerpted soundtracks featured enough great music to fill multiple CDs, after all. Is a moment of silence too much to ask? 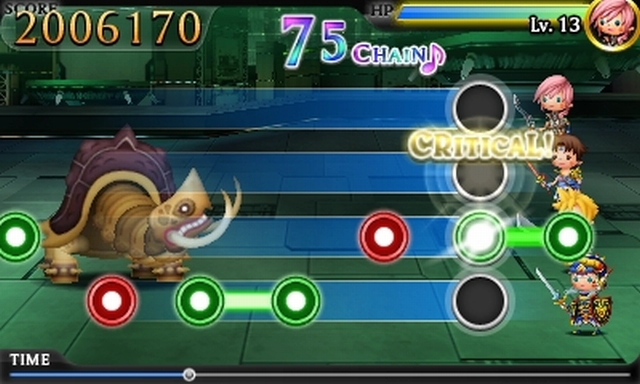 Rather than favor any one title too much, the developers opted to include five primary selections per game: a field theme, a battle theme, and an event theme (usually quite stirring) and the opening and closing tunes. Besides simplifying the developers decision about what all to include, the overall five songs per game approach allows players to take a surprisingly satisfying virtual tour of the franchise. Youll do so by selecting the Series option, which is all thats initially available. There, you will be presented with a row of virtual discs emblazoned with the familiar Final Fantasy logos from each of the first 13 main installments in the series (theres no Final Fantasy Tactics stuff, and no Final Fantasy X-2). Familiar character artwork appears along the top screen, which is especially nice for other fans who have enjoyed the games throughout the years the way I have.

When you actually start playing, youll see that the opening and closing songs are actually just bonus rounds bookending the songs that serve as the main attraction. The remaining selections fall into one of three categories: Battle Music, Field Music and Event Music. The rules change depending on which type you are playing. In Battle Music, notes will fly toward you rapidly and youll need to tap or swipe or press and hold the stylus against the screen accordingly. You dont have to worry about placement on the screen, as long as you have room to act. Field Music plays out mostly the same way, except much of your time is spent holding the stylus against the screen and moving it up and down in order to pass over nodes that are placed along an audio wave of sorts. Finally, the Event Music mode is like the Battle Music mode, except that youll have to watch a circle glide along a predetermined route and youll need to tap or swipe or hold the screen as indicated by icons along that route.

The varying rules from one mode to the next can seem overwhelming at first, but the differences are actually rather minor and youll adapt to everything quickly enough. The biggest difference is actually the differing background imagery. Battle Music places you in a combat scenario that looks like it was pulled from one of the first nine games, with your characters on the right side of the screen and enemies appearing to the left. Field Music areas show your (decidedly chibi) character walking from right to left through a deformed environment pulled from the respective Final Fantasy title. As for the Event Music mode, it often features distracting visuals in the background. For instance, the ball room sequence with Rinoa from Final Fantasy VIII is hard to ignore if youre playing in that particular titles stages, but ignore it you must if you mean to earn a good rating. 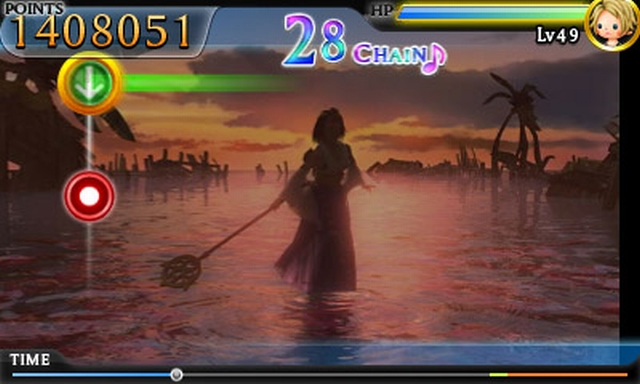 As you clear stages, youll be earning experience points of two sorts. One sort is the usual thing you might expect in an RPG, which allows your chosen characters--taken from various Final Fantasy games and assembled into a four-person party of your liking--to go up levels and gain more HP (so that you can afford to make more mistakes without failing your attempt at a song) and skill points (so that you can assign abilities that allow you to restore health or use special attacks). The other points you gain from clearing a stage are fed into a crystal. At various points, youll then unlock crystal shards that go toward eventually earning new characters for your potential roster, or unlocking the end game content or even new songs and movies to view in the games Museum mode.

Theatrhythm Final Fantasy seems to have more depth than a person might expect, thanks to the RPG elements, but that depth doesnt necessarily present itself in a worthwhile manner. It also feels like it was thrown in as a distraction, rather than to make anything genuinely better. The games easiest difficulty setting is sufficiently basic that I was able to power through everything without any special abilities equipped--often while earning an SS ranking in the process--but the Expert setting is demanding enough that sometimes it was all I could do to finish a song even with a bunch of abilities assigned to my well-rounded team of chibi warriors (at least until I grew accustomed to the quick flicks that are necessary to avoid messing up when clearing arrow symbols as they scroll along the screen). Then on the highest setting, which is available only after you all but perfect the Expert songs, youre punished so harshly for every mistake that I cant imagine getting much of anywhere without a lot of practice. 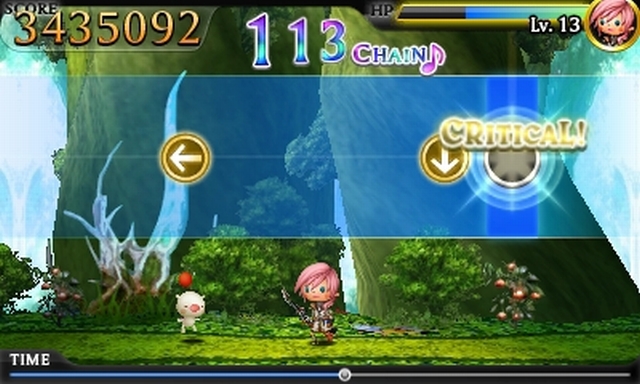 Any number of masochistic gamers might welcome the challenge the game provides, but Square-Enix might just as easily have kept people entertained by including more musical selections. Instead, the developers seem to be betting on DLC; before you even swipe or tap a single note, youll have the option to access an online store where you can purchase songs that werent included. Given that the game retails for a hefty $40 right now, that feels icky. The included stylus and a sheet of stickers dont entirely make up for it, either.

Despite my various complaints, though, Id still suggest that you pick up Theatrhythm Final Fantasy if you love the series of games from which it draws its music. I hadnt played a Final Fantasy game since clearing Final Fantasy XIII in 2009, but this new 3DS release reminded me of all the wonderful things Ive been missing. Give it a shot and let it remind you too!
4/5

If you enjoyed this Theatrhythm Final Fantasy review, you're encouraged to discuss it with the author and with other members of the site's community. If you don't already have an HonestGamers account, you can sign up for one in a snap. Thank you for reading!

© 1998-2020 HonestGamers
None of the material contained within this site may be reproduced in any conceivable fashion without permission from the author(s) of said material. This site is not sponsored or endorsed by Nintendo, Sega, Sony, Microsoft, or any other such party. Theatrhythm Final Fantasy is a registered trademark of its copyright holder. This site makes no claim to Theatrhythm Final Fantasy, its characters, screenshots, artwork, music, or any intellectual property contained within. Opinions expressed on this site do not necessarily represent the opinion of site staff or sponsors. Staff and freelance reviews are typically written based on time spent with a retail review copy or review key for the game that is provided by its publisher.