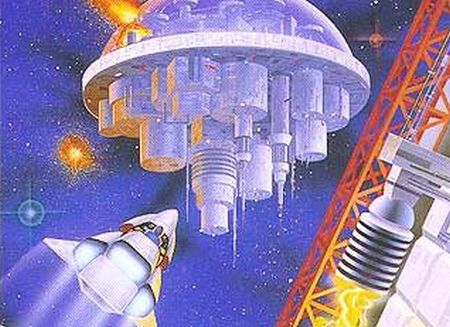 The screenshots on the back of Air Fortress's box baffled me. One depicted an orange character on a cruiser, blasting mechanical menaces on the surface of a space fortress. Another showed the same character sans the cruiser, creeping through the innards of some structure while fighting off more robotic sprites. I had to rent this game to find out which of these screens was true and which was foolery. It certainly couldn't be both!

The concept of splicing genres was a new one when I was a kid. Air Fortress didn't introduce it, but it did show me where games were headed. The concept isn't inherently special nowadays. You can't throw a stone into a Gamestop without nailing something that features RPG elements or intermittent platforming sequences. Circa 1988, though, you were either a scrolling shooter or an action-adventure game. You weren't both!

I fired up the game and instantly flew into stage one. I pointed at the screen and said, "Ha ha! It's a scrolling shooter! I knew it!" Scant enemies flew onto the screen, shaped like various simple objects like butterflies, boxes, and wheels. They disappeared just as quickly in violent explosions, my bullets laying each of them to waste. I glanced at the tiny HUD in the upper left and didn't notice a score. Enemies weren't dropping power ups, either. There wasn't much of a point to blasting enemies since they were just as easily avoided, and killing them begot not rewards. I didn't realize then that I was one step away from a possible criticism, in that the game seemed like a minimalistic and dull shooter. 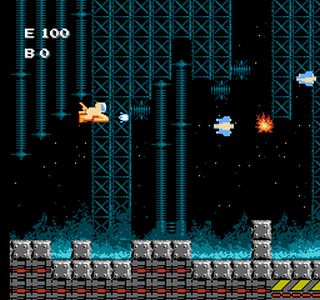 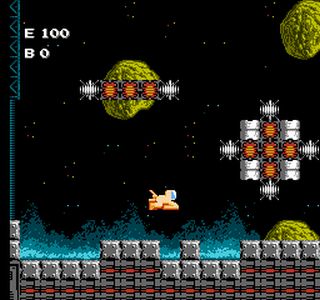 Enemies ceased for a short while and power ups appeared on the screen, beginning with 'E's and 'B's enclosed in bubbles. Both my 'E' and 'B' increased as I nabbed these, though I had no idea what they were. As I advanced, I found enclosed letters in tricky locations, stuck in tight spaces between two obstructions or a bed of spikes. There came the question of whether or not it was worth risking a life just to grab one 'E'. I did anyway because I loved challenges. I also thanked the developers for including such tight controls to help accomplish such rough tasks.

More enemies appeared and died in greater frequency. The game was building up for something. A few more swarms of baddies died and then the craziest thing--at least to a younger version of me--happened. My character parked his cruiser and started walking to a door. YOU ARE NOW ENTERING THE AIR FORTRESS appeared on the screen. I sat there, jaw slack, expectations defied. Shit just got real.

Beyond the door lied the inner sanctum of the titular fortress. Though what I saw looked like a platformer, it wasn't one exactly. Rather than jumping, I could float through the air. With this handy ability, I could weave around the veritable storm of enemy projectiles that soared by at tricky angles. Meanwhile I could blast enemies with either my standard gun or a special bomb. Turned out that was the 'B' stood for earlier.

Moving consumed my energy (the 'E's from earlier), but holding still refilled it. Taking damage didn't only drop my energy supply, but energy capacity. This meant I had to be cautious about moving around in enemy-laden areas. I would take damage from two different sources. I found myself moving about to avoid fire, losing energy, only to take damage and lose even more energy. In areas like that, there was no place to rest, so it was easy to become overwhelmed if I wasn't careful.

I blasted my way through the laughably linear first stage. There was no boss guarding exit, but a giant red ball that was the air fortress's energy source. A few bombs put the source on ice. The fortress itself went black, the adventurous music that was driving me nuts cut off, and I pressed on. I found another orange cruiser, which I commandeered, and exited the stage.

I celebrated my simple victory, thinking for sure that I was a pro and that this game would meet its match with this rental. I would later pay for my arrogance.

As I advanced, I grew to dislike the shmup stages more and more. They were simple and stripped down, and only offered any challenge towards the end of the game. You never tangled with impressively designed enemies, and always saw the same metallic environments over and over again. More than anything, these levels were an interruption. The real attraction was exploring the fortress itself. 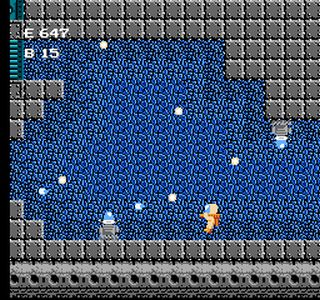 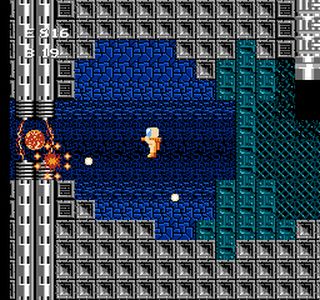 Fortress stages became nuts. Enemies spawned in massive numbers, all of them hurling so many bullets that I could no longer adeptly weave around them. I had to hang back and try to take out as many enemies as I could, hoping my energy would not deplete before I could rest. Some shots could home in on me, and avoiding them usually meant flying into another bullet or enemy. It got worse when I had to fight enemies in tight spaces lined with spikes and magnetic traps. I also flew backwards any time I fired a shot, thanks to the low gravity. I had to watch my flying and monitor my shooting while keeping in mind my position in relation to my surroundings. For a game that appears so simple, it was fairly complex!

I always worried that tough segments would strip off so much of my energy that I wouldn't have enough to survive later. I became a cautious explorer, but even then I got my face ripped off a few times. There were some parts where the game tossed out multiple red clones of me. Not only could they fire back, but they could dodge attacks as skillfully as I could! One bomb usually settled the matter, but conservation was still paramount. Just the same, these guys were great for softening me up for later perils.

Sometimes I would find the power source, blow it to bits, and get lost looking for the exit. Where the first stage was straightforward, later levels were incredible convoluted. You would never be able to find your way without a map or an impeccable memory. What made these scenes tougher was that there was an undisclosed time limit to reach the end. The game gave me warning signs instead of numbers. First the screen shook, then a horrific rumbling resounded throughout the structure. When the screen started to flicker, that's when I panicked. Most of the time I found the exit, but sometimes I went down with the ship. No matter how many lives I had, it spelled 'game over.' I had to take it from the top, starting over at the shooter half of the stage.

Yes, Air Fortress clobbered me like I was penniless hooker. Yes, I enjoyed it. No, I didn't want to take the game back to the rental store. I did, though, and I missed it.

It was neat to see two genres come together at the time. Looking back on it now, it wasn't a very stable mixture. Where the shooter sequences were meant to add to the game, they detracted from the experience. They weren't particularly awful segments, they just weren't as exciting as the rest of the game. Air Fortress came to life when it thrust me into desperate situations while inside the fortress itself. Forget the blending of genres. The blend of isolation, claustrophobia, tension, panic, and the fear that you might not have enough energy to survive was the real mixture this game thrived on. That's what made the game worthwhile and even overpowered the underwhelming shooter stages.
3.5/5

If you enjoyed this Air Fortress review, you're encouraged to discuss it with the author and with other members of the site's community. If you don't already have an HonestGamers account, you can sign up for one in a snap. Thank you for reading!

© 1998-2020 HonestGamers
None of the material contained within this site may be reproduced in any conceivable fashion without permission from the author(s) of said material. This site is not sponsored or endorsed by Nintendo, Sega, Sony, Microsoft, or any other such party. Air Fortress is a registered trademark of its copyright holder. This site makes no claim to Air Fortress, its characters, screenshots, artwork, music, or any intellectual property contained within. Opinions expressed on this site do not necessarily represent the opinion of site staff or sponsors. Staff and freelance reviews are typically written based on time spent with a retail review copy or review key for the game that is provided by its publisher.