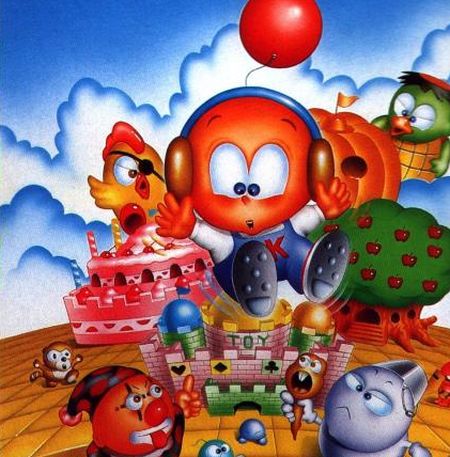 For many years, I avoided renting Kickle Cubicle. That cute orange face always stared at me from the shelf like it was peering into my soul. "You don't mind adorable games," it would speak into my mind, "so rent me. REEEEEENNNNNT MEEEEE!" I was successful at avoiding it for years, but that cute face had imprinted itself on my memory. I would often space out in college classes or while on a walk and the face of the soul-eater would pervade my thoughts. It didn't need words. The enormous doe eyes did all the work.

I needed to play this game. I had to put Kickle's spirit to rest. All of the rental stores had sold off their NES stock by that point. I needed to contact one of my NES collector friends and get my mitts on that game. I was hungry for pre-Pokemon cuteness.

There's a carefree atmosphere to Kickle Cubicle. It tries to emulate arcade titles like Dig Dug by presenting you with a small area teeming with dastardly monsters. Each level is a single island with various traps and power ups waiting to be nabbed. The object is collect every red bag to destroy the island and free the people imprisoned within it. By "people," I really mean "various fruits, vegetables, pastries and toys with cute faces on them." Liberate every googly-eyed abomination in a world and they'll send you to a palace to go head-to-head with a boss. 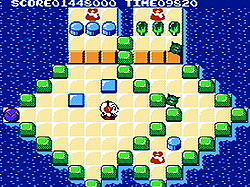 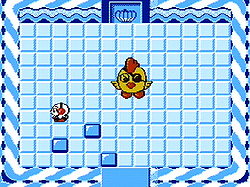 This may sound like an easy task, but in reality it's insanely easy. This isn't to say that the red bags are all in the open, just waiting for you to traipse to them and advance to the next stage unabated--although that is sometimes the case. Most of the time they're laying on a separate part of the island, surrounded by uncrossable water. This is where Kickle's magical ability comes into play. He can belch frost at an enemy, freezing them. Most transform into icy statues that he can shatter with a devastating kick, but there's a breed of baby-blue slimes he can transform into ice blocks. Kicking a block will send it flying across the screen until it hits a wall, flies off the map, or shatters. Should a block fly into a patch of water, it creates a permanent ice bridge which can grant access to isolated parts of an island.

It's not the formula that goes awry. This game has the potential for some great mind-benders, but the problem is that a vast majority of the game is extremely easy. Most puzzles aren't exactly mental exercises, and the solutions are plain as day. Most of the time you kick a block or two into the water to get to a red bag while dodging a minimal amount of enemies. Even in my first playthrough, I was able to complete some of the easiest puzzles in mere seconds. I even made it more than halfway through the game in one sitting before deciding that I was bored and needed some air. If a game is solid enough, I usually say, "Air? Screw air. Breathing and sunshine are overrated."

This isn't to say that there are no challenging puzzles. However, you have to tear through dozens of easy stages to get to them. By that time you'll probably have lost interest, and with good reason. The payoff still isn't worth it, despite the occasional solid puzzle. There are a few where you need to tread carefully, using blocks to act as shields against rotating turrets or trying to out-step bladed traps a la Zelda. I remember one where you had to free four said traps in order to nab the level's bags. Only one area in the very middle provided enough space to step past the traps, but my timing needed to be impeccable or else the trap and I would occupy the same space. I can't count the number of lives I lost getting past those things, even with the ability to imprison them again by creating stationary block of ice. Unfortunately, there are incredibly easy levels even late in the game. Getting to a challenging stage like the aforementioned one still means having to plod through a few easy ones.

Boss battles could have been a great break from the tedium, yet every boss battle was close to the same. The boss walks side to side at the top of the screen, tosses an item at you that breaks into four smaller pieces, and you kick a piece at the boss. Hit it five times and you win. End of story. We're not even talking about cool looking bosses, either. You make like Peter Griffin and battle a giant chicken, take down an insane clown, and go foot-to-shell with an adorable turtle. Each boss moves in roughly the same pattern, utilizes the same attacks, and is about the same level of difficulty. In a way, the boss battles are like a formality. They're incredibly easy, but fill the void of a basic rogues gallery. 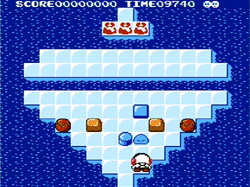 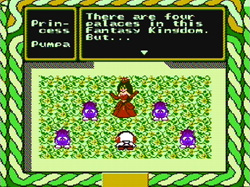 Something is definitely off about this game. It's like the developers spent more time making it look cute and less time developing a challenging puzzler. I don't know if the toned down challenge was intentional, what with the cutesy atmosphere and all, but it sure as hell wasn't welcome. After finishing Kickle Cubicle, which didn't take long at all, I pulled the game out of my NES and stared that dopey freak down one last time. I had only one last thing to say to him:

"You invaded my psyche for this?"

From that point, I've put a lot of possibly rotten or mediocre games out of my mind. There were a bunch I've always wanted to play, but decided it was better to heed my instincts. It's thanks to Kickle Cubicle that I've become a slightly savvier consumer, and I'm that much more mentally stable. Now that I've had that bit of closure, there hasn't been any creepy orange-skinned people in my mind begging me to play their game.

Although that Dog's Life game keeps giving me doe eyes in my dreams. Maybe I'll hunt it down and finally give it a proper playthrough.

If you enjoyed this Kickle Cubicle review, you're encouraged to discuss it with the author and with other members of the site's community. If you don't already have an HonestGamers account, you can sign up for one in a snap. Thank you for reading!

© 1998-2020 HonestGamers
None of the material contained within this site may be reproduced in any conceivable fashion without permission from the author(s) of said material. This site is not sponsored or endorsed by Nintendo, Sega, Sony, Microsoft, or any other such party. Kickle Cubicle is a registered trademark of its copyright holder. This site makes no claim to Kickle Cubicle, its characters, screenshots, artwork, music, or any intellectual property contained within. Opinions expressed on this site do not necessarily represent the opinion of site staff or sponsors. Staff and freelance reviews are typically written based on time spent with a retail review copy or review key for the game that is provided by its publisher.