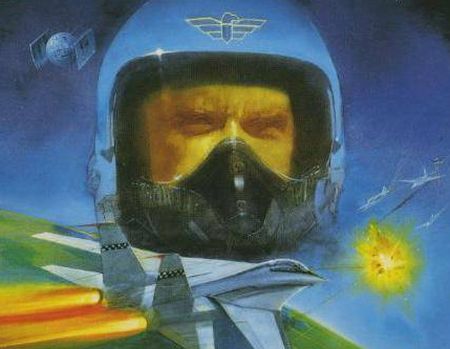 Our story begins with a young man, gifted with the most awesome surname in the history of mankind: Skyhawk. He knew with such a name came certain expectations and responsibilities. He knew he has to be a fly boy, but could never command an ordinary plane or jet. Nor could he concern himself with human wars and politics. No, the man needed to fly the greatest fighter jet of all; one capable of flying into outer space. This jet had to be armed with only the most sophisticated weaponry: flaming rockets, homing missiles, and a rapid-fire cannon with unlimited ammunition. He knew from childhood that he would have one destiny in life: killing aliens. No questions, no political negotiations, no mercy: just good old fashion shooting and lots of explosions.

There's just one twist. According to the instruction manual, Captain Skyhawk is you. While you were thumbing through the first few pages of the manual, the captain's astral body entered your physical body. He's the Whoopi to your Demi. His failings and victories are also yours. This mission, should you choose to accept it, is also both his and yours.

You don't begin your mission over a vast ocean or a burning city, but over a bald environment that resembles virtual reality according to a person from 1990. It may have looked spectacular when the game hit shelves, but it looks awfully dull these days. That doesn't mean there's nothing to appreciate visually. Peaking into the instruction manual tells us why the graphics appear this way. It turns out your jet is linked to a satellite surveying your every move. It broadcasts an overhead view of your position onto a screen in your jet, giving the game that "bald" look. 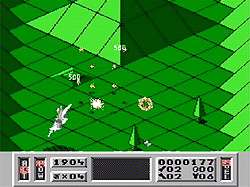 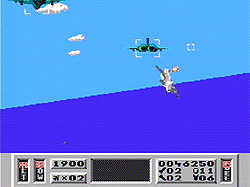 This was Rare's attempt to immerse you by making you feel like you were part of the game. Your living room or bedroom became the cockpit of the greatest fighter jet known to man. Like many Atari 2600 games, Captain Skyhawk attempts to engage your imagination and get you more involved while playing. It shows some level of love went into its development. The developers wanted you to play and be part of the game rather than just purchase it.

You tear into that first level built of jagged mountainsides and pyramid-like hills. Like many shmups, you advance vertically and shoot anything that looks destructible. You'd like to kill more, but you've found something else stunning. You move side to side, but the terrain is isometric. In other words, 3D. Terrain isn't a flat texture like we're accustomed to seeing in most shmups. You can actually crash into canyon walls--and oh, you will! You can also raise and lower the jet's altitude while scrolling vertically. It may not sound special these days--and really it isn't--but it still shows the quality of work that Rare put into the game. This was quite uncommon at the time. It was a difficult concept to execute, and Rare nailed it.

Captain Skyhawk isn't like other shmups from its era. There are far less enemies who fly onto the screen and run patterns. Most enemies are stationary, like environmental fixtures waiting to be blown to bits. While you'll gun down your share of enemy planes, you'll also blow the faces off sphinxes, destroy violent pyramids, and put an end to giant assault vehicles. However, the game never overwhelms you. There's usually just enough space to weave around the shiny silver projectiles that your opponents launch. Most enemies can be easily taken out or even avoided without the fear that they'll chase you down.

Somehow, though, they manage to kill you a lot. The game's control response is a tad loose, just enough to add some much needed challenge to the game. If you don't wind up flying into a hillside, you'll accidentally crash into a bullet. You can tell that Rare intended for the controls to be loose. It gives the game a more authentic feel, like you're actually controlling a jet. Again, Rare's way of making you feel like you're part of the game.

As you advance, the game gets better and better. Levels fly by at insane speeds, some almost too ridiculously fast to finish without losing a life or four. The game not only ramps up the challenge factor with each stage, but features a fair amount of variety. It's not like Bayou Billy where you only have a few stages outside of the norm. You encounter them frequently. After you polish off the first boss, the game instructs you to gun down enemy planes. You then enter a screen reminiscent of typical fighter jet games. There's nothing complicated about these scenes. You fly your jet all over the screen, holding down the fire button and watching the opposition burst into flames. Of course, you'll have to keep a look out for any heat-seeking missiles, lest you should perish in a swear-inducing explosion. As you take out enemy planes, you accrue credits that can be used to purchase refills of your special weaponry and boost the speed of your main gun. The added convenience of purchasing upgrades is nice, but the breath of fresh air that the jet-shooting sequences provides is even better. 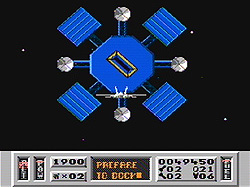 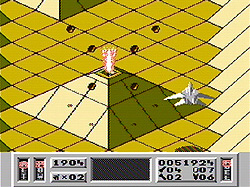 However, not everything about the variety is great. Now and then you'll take on special delivery missions that involve dropping supplies into square-shaped "holes." Each of these levels has two different drop points, each guarded by scores of aliens. Getting to the holes isn't difficult, but making the drop can be. Tapping the 'B' button drops the supplies, but you can only drop one at a time. The reload time between drops is lengthy enough that you must be spot on in regards to timing. If you aren't, you'll miss the drop zone and have to loop through the entire level over again. You can't turn your plane around and retry. This becomes especially annoying when you miss the drop numerous times and spend about twenty minutes playing the same level over and over again.

However, one tiny flaw doesn't hamper the experience. Captain Skyhawk is a tightly paced game. It throws just enough enemies at you to keep the pace from dropping and never tosses ridiculous swarms of enemies or their bullets at you. You're never cheated out of a life, and you own your mistakes as such. It's up to you to figure out how to fly effectively and kill efficiently.

Rare's invitation to play and keep playing is what makes the game worthwhile. It's not only a charming and fun title, but you can tell the developers wanted you to keep playing and enjoy the time you spend.
4.5/5

If you enjoyed this Captain Skyhawk review, you're encouraged to discuss it with the author and with other members of the site's community. If you don't already have an HonestGamers account, you can sign up for one in a snap. Thank you for reading!

© 1998-2021 HonestGamers
None of the material contained within this site may be reproduced in any conceivable fashion without permission from the author(s) of said material. This site is not sponsored or endorsed by Nintendo, Sega, Sony, Microsoft, or any other such party. Captain Skyhawk is a registered trademark of its copyright holder. This site makes no claim to Captain Skyhawk, its characters, screenshots, artwork, music, or any intellectual property contained within. Opinions expressed on this site do not necessarily represent the opinion of site staff or sponsors. Staff and freelance reviews are typically written based on time spent with a retail review copy or review key for the game that is provided by its publisher.