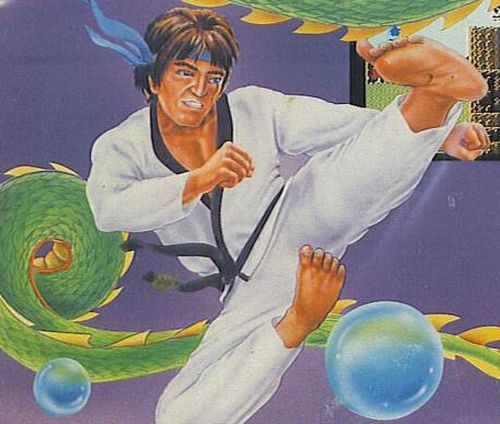 There was an awkward moment in my teenage years that involved watching an old VHS of Dragon Ball. I joined my friends with the show in progress and squealed with recognition: "Holy crap, it's Dragon Power!" I then began to call characters by the wrong names and baffled the living hell out of my friends. I wasn't able to dig the Dragon Power cart out of the closet to show them what I meant, so instead I sat in uncomfortable silence until someone piped up about the new Spider-Man game.

This awkward teen moment was brought to you by Bandai, who saw it fit to repackage the NES Dragon Ball game when bringing it to the States. They had to have known something like this would happen, and were probably laughing their mean teen-bullying asses off as they announced the American release. They changed most of the names and even altered a few appearances. Now we follow Goku (sans the spiky hair) and his female friend Bulma Nora on an adventure to find the Dragon Balls Crystal Balls. Along the way, they befriend the obnoxiously horny Oolong gluttonous Pudgy, battle the master thief Yamcha Lancer, and storm the fortress of Emperor Pilaf King Menos.

I'm not sure why they did this. It couldn't be that the license would scare off non-fans--you know, 99% of America in 1986. Potential buyers would not have known it was based on a manga, as a vast majority of America had yet to even discover it. They could have left the license in and consumers would have been none the wiser. Nowadays, the repackaging sounds like a silly idea.

This isn't to say that the repackaging was Dragon Power's downfall. We could look past it and just enjoy the game, except it's really not that enjoyable. 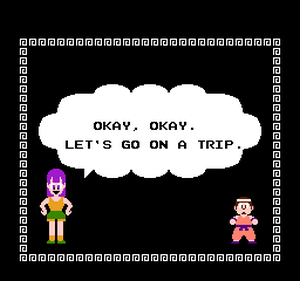 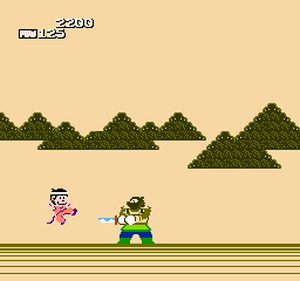 Some of the basic elements that make up a decent license title are there. Stages resemble scenery from the manga/anime, from Ox King's fiery abode to the town under the control of the Rabbit Mob. While the scenery may not look particularly great, it at least resembles the source material.

Our departure from "decent" to "not so good" begins with a poorly translated narrative. There are basic cutscenes between bits of action in which characters utter lines in shortened (read: caveman-ish) sentences or in awkward fashion:

"Goku, beat him up with magic pole."

...and other such gems make an appearance. The game may sound like an accidental comedy, but in order to get to these golden lines, you have to sit through a lot of dull, tedious dialogue. Text slowly appears on the screen, forcing you to wait an agonizing length of time for characters to spit out the most basic and unimportant lines. It's a challenge not hitting the 'Select' button to skip the cutscenes.

So in addition to ignoring the fact that this is a Dragon Ball game, we now have to ignore the narrative. Now we've cut the heart out of this license title and all we're left with is a basic action title.

...with simple, yet terrible combat.

Mechanically, Dragon Power is a sound game. The control response is tight and responsive, and the control scheme is mostly to the point. You run around in an overhead view, punching the tar out of poorly designed enemies. Now and then you run into an "action-packed fighting scene" (according to the manual), in which you battle a boss or smash bricks in a horizontal view fist fight. Honestly, this sort of thing is difficult to muck up.

In order to defeat most enemies, you have to practically hug them because of Goku's short attack range. While you're busy punching the enemy, it's draining your life by constantly bumping into you. There is no weaving around enemy attacks because of the short attack range. Fighting anything, even bosses, is all about powering through the encounter quickly before you lose a large portion of health. Your only recourse is to nab the power pole, which allows you to nail enemies from a distance. Even if you can defeat them without taking damage, your life slowly depletes anyway due to hunger. More often than not, you'll avoid combat to conserve life.

I'll repeat that: this is an action game where you benefit from avoiding combat. 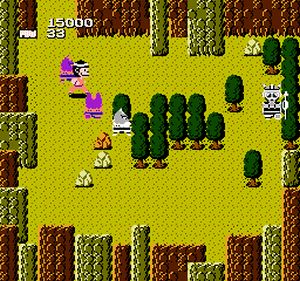 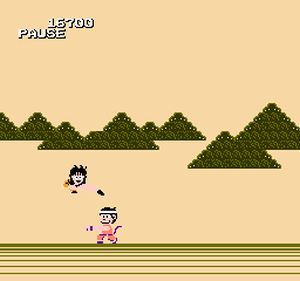 You can restore health, sure. You just have to get lucky. Hidden throughout the game are secret caves and capsules that sometimes belch out life-restoring items. Whether or not you get a life-restorer, or even how powerful of one you get, is random. Whether or not you get a power pole is also random. Your chances of surviving a level, thanks to the short attack range, hinge way too much on luck.

Yes, you can perform the Kamehameha. No, it isn't called by that name. It's called the Wind Wave now. You only get finite uses of it, obtained from shell-shaped power ups, but again finding them is a random chance. In other words it's just as unreliable as everything else.

Getting through the first half of Dragon Power really isn't all that difficult. It's just tedious. Sometimes the planets will align and you'll receive a good setup. You'll nab a pole right away, build up your health, and power your way through every battle. If you die, no biggie. There are infinite continues. However, once you've completed level six, Bandai reveals another horrible idea. If you die on any level past the seventh, you'll continue on level seven. Just died at the final boss? Back to level seven you go!

This is assuming you don't lose interest before getting that far. Sadly, I've seen all this game has to offer, and none of it is worth the tedium. The most frustrating part of this sloppy piece isn't the missing Dragon Ball affiliation, nor is it the troublesome combat, nor is it the dependency on luck. It's the screen that appears just after the ending in which Emperor Pilaf says, "Great game, huh?" Silently, I shut my NES off after reading that. I haven't touched the game since, except briefly to refresh my memory for this review, and probably never will again.
1.5/5

If you enjoyed this Dragon Power review, you're encouraged to discuss it with the author and with other members of the site's community. If you don't already have an HonestGamers account, you can sign up for one in a snap. Thank you for reading!

© 1998-2020 HonestGamers
None of the material contained within this site may be reproduced in any conceivable fashion without permission from the author(s) of said material. This site is not sponsored or endorsed by Nintendo, Sega, Sony, Microsoft, or any other such party. Dragon Power is a registered trademark of its copyright holder. This site makes no claim to Dragon Power, its characters, screenshots, artwork, music, or any intellectual property contained within. Opinions expressed on this site do not necessarily represent the opinion of site staff or sponsors. Staff and freelance reviews are typically written based on time spent with a retail review copy or review key for the game that is provided by its publisher.