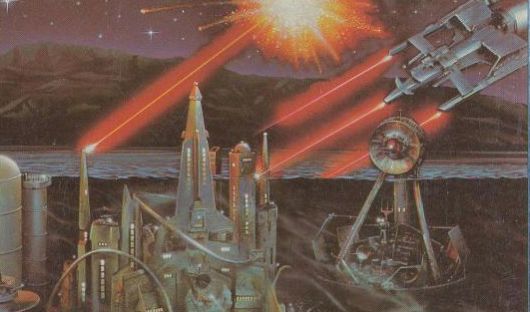 On the screen sits a quiet underwater city. The peculiar structures belie a peaceful technocracy, but the cannons above sea level suggest something less than peaceful. You hit the 'fire' button, then hit the deck. Star Trek-esque ships invade your airspace and threaten you with DOOM. Your first instinct is to grip that joystick and move, baby, move. Nothing happens. We're accustomed to sprites or cursors moving at our command, and that's what Atlantis prays on. You don't have a complex counter-missile system like Missile Command, nor do you have an air force to combat the death from above. You are immobilized, faced with a grim disadvantage. You might feel the urge to panic, but you must stay alert and focused to take out the interlopers.

Your only defense rests with three cannons, one sitting dead center and one on either far side. To activate the side cannons, you have to move the joystick in the corresponding direction. This may sound like a downer, that all you can do is shoot, but what more do you need? Atlantis obeys Atari 2600's golden rule of keeping everything simple while maintaining a fast pace.

With a rudimentary sense of timing, you can easily wipe out the first few waves of ships. You probably won't even need the side cannons. As you advance, the speed picks up. Timing becomes tighter, precision more important. Let a ship slip by and it'll return with a nasty vertical laser, destroying one of your structures. The first to go is usually your central cannon, and from there you're forced to use the side guns. As ships slip by, they'll destroy more pieces of your city until until you are forced to flee.

Atlantis gets wicked frantic. Eventually you cannot keep up with the speeding ships unless you're either a genius or an android specially programmed to rock at timing-based games. There are special ships you can shoot that will wipe out everything on the screen, and that really helps. Even with said ships, it doesn't take long for the difficulty to escalate, and you'll find most of your sessions don't last much longer than a few minutes.

Even as a kid, I didn't have an especial love for this game. I popped it in to cleansed the old palate. It provides quick and simple action, and sometimes that's all you need. However, the game is so simple, with sessions so short, that it's difficult to stay focused on it for more than a few plays.

Atlantis achieves what it sets out to do. I can't argue with that. Its developer knew to keep things simple, and provides us with decadent basic action packed with enough explosions and destruction to keep drooling fools like me interested. It still feels like there's room for another concept or two, but adding them wouldn't have killed the game's basic feel.
3.5/5

If you enjoyed this Atlantis review, you're encouraged to discuss it with the author and with other members of the site's community. If you don't already have an HonestGamers account, you can sign up for one in a snap. Thank you for reading!

© 1998-2020 HonestGamers
None of the material contained within this site may be reproduced in any conceivable fashion without permission from the author(s) of said material. This site is not sponsored or endorsed by Nintendo, Sega, Sony, Microsoft, or any other such party. Atlantis is a registered trademark of its copyright holder. This site makes no claim to Atlantis, its characters, screenshots, artwork, music, or any intellectual property contained within. Opinions expressed on this site do not necessarily represent the opinion of site staff or sponsors. Staff and freelance reviews are typically written based on time spent with a retail review copy or review key for the game that is provided by its publisher.