I don't normally play side-scrolling shooter type games, but I had to find a game beginning with X for this contest, and, after rejecting the more obvious candidates, I opted for Xardion. On the plus side it was likely to be short, and it had another minor instant attraction: it reminded me of Lost Vikings, one of the very first video games I ever played and loved. Except that I quickly discovered that the ONLY likeness to that game is that you switch characters to solve ONE puzzle in order to progress. There's no humour, no clever interchange of skills or imaginative level design, and very little need to switch characters around at all. So, forget that comparison, as I quickly did.

Sadly, that puzzle was just a matter of using the dog character (Panthera) to walk under an overhang to reach a switch, and my expectations of nifty puzzle solving were soon dashed. Nonetheless, you can exchange characters at any time, even during boss battles, and experiment a bit to find out which one might be the best choice for some enemies. But most of the time you'll be using the main character, Triton, who has the awesome ability to fire his gun UP, even through platforms, to kill most enemies before they get anywhere near him. 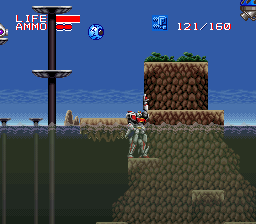 Triton can jump quite nimbly and the controls work pretty well to hop and skip around some simple platforms. I did find that he couldn't fire up while moving, so I had to walk him back and forth to get him directly under an overhead enemy and then stop and fire, which was a bit frustrating when the enemies were moving faster than he could walk. Panthera fires a gun too, but only in a straight line ahead, although that's potentially useful for small enemies on the ground. The third character, Alcedes, uses a kind of whip which was good for groups of enemies that were a bit higher than the gun could fire at, but not as high as the ones overhead. However, you could also just jump past some enemies to avoid them altogether so I didn't need to change the team around by much.

I can't say much about the story, or where these mechanical looking characters came from, or why they were forced to do battle through three planets and various space ships, but there is a brief introduction that sets the scene. Some kind of invasion of these planets has been ongoing and the task is to seek out the source of the invaders power. At least you do get an explanation at the very end, but the story is just a simple hook for the rest of the game, and I suppose it serves its purpose. 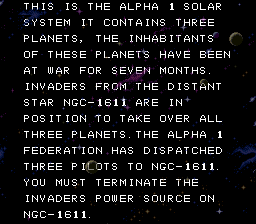 In all there are nine stages, each set on a different planet or space-ship and there are a few surprises in store, such as when you're catapaulted out of a burning ship and parachute down to an icy planet, only to drop down a large hole a couple of paces later, and find yourself inside a forest. Or when you suddenly find that everything has been turned upside down, or that you're in a lilliput world where you can walk over buildings and get fired on by tiny little people scurrying around your feet. These are nice ideas, but the extreme shortness of each stage means that they are not as significant as they could have been.

One helpful feature is that you can repeat a stage as many times as you like. Even if you get killed, or keep falling off a tree branch after being attacked by boomerang throwing imps, you just get sent back to the start of the stage with all your experience intact and the items you can pick up replaced. Each enemy killed gives 1 experience point to the character that kills them, and you can keep increasing levels, which increases HP and ammunition capacity. This is used for special skills: power-up attacks, or shielding abilities, which are found in various locations. But it would mean a lot of boring shooting and jumping to level them all up equally. Boss battles give a lot more experience but you can only fight the bosses once, and only the character that's on screen when you kill the boss will get the experience. Since you're going to use the most powerful one for that, it really defeats the point of having three of them. 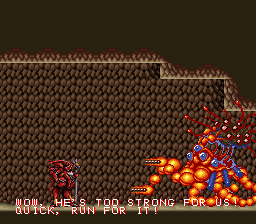 I didn't use half the skills as it was easy to run out of the ammo required farily quickly and I tried to save them for the bosses. Boss battles are very varied in difficulty. Sone last seconds, and others seemed to go on for ages and you cannot tell how far you are from the end point as the game gives no indication of their health. This was very frustrating for one boss in particular that I seemed to be firing at for an inordinate amount of time, not knowing how much damage I was doing to him or when he'd be dead. Another boss battle made up for this when you stand to one side while the enemy helpfully destroys the platform he's on, and crashes down the aerial lift without you having to lift a finger to fire anything at all.

Aside from the bosses, ordinary enemies are easy enough to kill as their patterns of movement are predictable. There are tiny fixed security devices, orange darting butterfly things, moths and imps in the forest stage, or mines that blow up if you got too close. I liked the addition of the tiny people that you had to stoop to kill, and the trees that came alive, attacked and then went back to being trees again, or rolling stones that could be shattered with a quick burst.

Xardion did have enough interest to keep me playing, mostly to see what new area they would put you in next, and the relatively simplicity of the jumping, without too many tricky sections, meant that it wasn't too frustrating. However, I did cheat by giving myself infinite health, so at least I had a chance of completing the game without too many restarts. I still had to find the upgrades and the ammunition required to use them, and enemies could knock me off branches necessitating retries, but it gave me a bit of an advantage, which I needed.

Its shortness is its strength, and there's no chance of getting bored since each stage only consists of a few screens. However, that's also its weakness, and it's a shame they didn't make more use of the three characters, or introduce some navigational challenge. Since I never beat games I don't like at all, that makes Xardion a good enough game for me.

If you enjoyed this Xardion review, you're encouraged to discuss it with the author and with other members of the site's community. If you don't already have an HonestGamers account, you can sign up for one in a snap. Thank you for reading!

© 1998-2020 HonestGamers
None of the material contained within this site may be reproduced in any conceivable fashion without permission from the author(s) of said material. This site is not sponsored or endorsed by Nintendo, Sega, Sony, Microsoft, or any other such party. Xardion is a registered trademark of its copyright holder. This site makes no claim to Xardion, its characters, screenshots, artwork, music, or any intellectual property contained within. Opinions expressed on this site do not necessarily represent the opinion of site staff or sponsors. Staff and freelance reviews are typically written based on time spent with a retail review copy or review key for the game that is provided by its publisher.