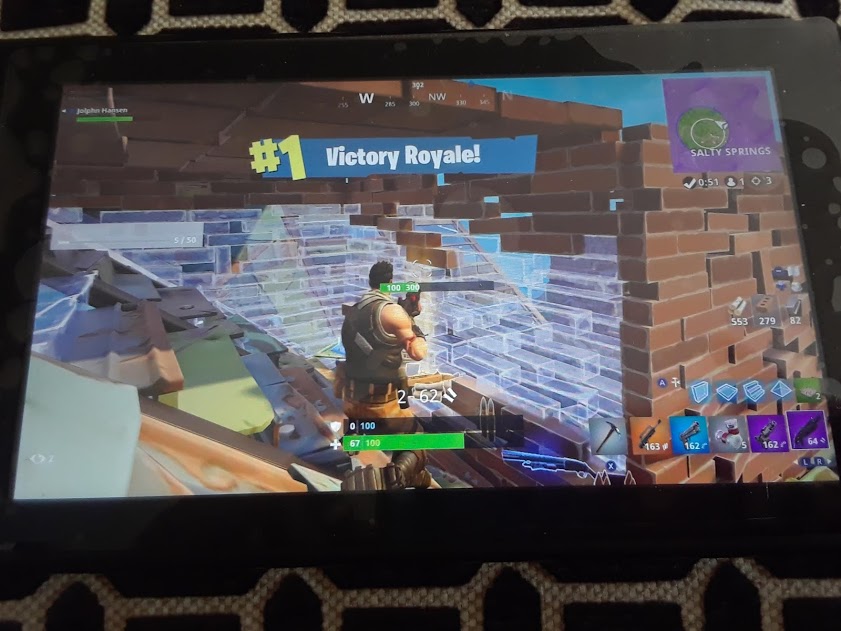 Weve only just passed the halfway point of the year, and there are plenty of highly-anticipated games still to be released, but its hard to imagine any title becoming the mass market sensation that Fortnite has become. Its a remarkable rise to prominence, considering the games extended development process that birthed a completely different type of game, and the slightly sketchy origin story of the battle royale mode that made PUBG Corporation briefly consider legal action against the company that gave them an engine. It was a certainly a brazen lane switch to go where the money was, but Fortnite has become its own monster in the months afterward. Without fail, theres a new barely believable metric demonstrating the games rapid rise and financial success seemingly every week, exemplifying the game's rise from a greed driven PUBG clone into the most popular game on the planet. It doesnt seem possible for the numbers to keep getting higher, but they still are, and the money train is in no danger of slowing down any time soon.

It is a phenomenon that seemed to pass me by. I was cool with that: I played Fortnite on the PS4 for a couple weeks just as the frenzy started ramping up, and to paraphrase the legend Shania Twain, it didnt impress me much. The building mechanics felt really clumsily implemented, the shooting felt really floaty and inaccurate, I generally had a bad time. Perhaps my complaints are an elaborate rationalization for why I am so terrible at Fortnite on PS4. There is plenty of evidence to support that. Several hours of game time passed before I got my first kill, or as this game targeted at a younger demographic prefers to say, elimination. My highest placements uniformly stemmed from cowardice and luck keeping me out of sight from other players. The implicit tension of battle royale games made some matches enjoyable, but most of my time was spent collecting resources, slowly crouch-walking across the map, before being shot to death by the first person I came across.

I could still see some of the reasons behind its popularity. The most obvious reason is that its free to play and runs well on seemingly every piece of technology you could think to port it to, its art style more conducive to scaling up and down depending on the device (Its probably more welcoming, too). The other lies in its universally appealing gameplay. Fortnites freeform construction elements mark the game out as the spiritual successor to Minecraft, another wildly popular game that never caught my interest. Ive never spent much time with creation tools in games. When I played games with pronounced creation tools such as LittleBigPlanet or Super Mario Maker, both of which placed making your own content as a major selling point, I would just play levels made by other people. Id rather spend my time playing with the creations of legitimately talented people instead of stuff made my untalented squares like, for example, me. Still, I couldnt make myself enjoy playing Fortnite for more than a moment or two at a time, moments that became far too rare to wait for.

So when Chance the Rapper took to Twitter to announce the Switch version of Fortnite during E3, I scrolled past it without a second thought. But as the annual summer games drought fully kicked into gear, I found myself intrigued by the game again as if I hadnt already spent several hours trying to convince myself that I liked this game. The internet made the world smaller and impossibly vast at the same time. Moments like this where one game becomes the sun and the moon will become increasingly as pop culture becomes increasingly more fragmented. Feeling like part of the zeitgeist is a deeply human desire. Modern society is defined by the insane and generally hateful things people will do in order to feel like they're a part of something. Problematic streamers aside, Fortnite is a pretty wholesome way to experience a sense of community. The death of the monoculture is a good thing overall, but the nightmarish state of the world has made me think about the hateful extremes that occur when you can just ignore the interests of other people entirely. Its neat to feel like millions of people you otherwise have nothing in common with are enjoying the same thing as you. Its part of what makes the World Cup so appealing to non-soccer fans. So many people have been enamored with this game, so there must be something about it, right? When has the general consensus of the masses ever let anyone down? Also, I finished God of War a couple weeks ago, and a severe case of World Cup Mania has superseded any urge to get into another mammoth single-player game for the last month. (One day I will play you, Bloodborne. One day.) So I gave it another go.

And for reasons unknown to me, the game that had won over millions of players suddenly revealed itself to me. The shooting suddenly had just enough snap to it that I felt that I had a chance of winning a firefight. Im still in awe of people who can build useful, sky-high buildings in an instant, but I can make a basic wall around myself when the bullets start flying. This newfound confidence opened the entire game up, and I was able to witness the glorious zaniness of this constantly changing sensation. I shot a dude dressed like the Grim Reaper. I ate mushrooms sprouting out of a crater for health. I found a pinata full of supplies sitting alone in a field. I still died a lot, but I was more willing to interface with the feature set since I knew this was a game I enjoyed. When I get eliminated, Ive taken to watching the stream of my assailant to pick up tips on how to get better at the game.

A week later, I can still recall the precise moment where this game clicked for me. I was running through a field in the expanse between Retail Row and Tomato Town and I saw another player running just in front of me, with no awareness of the mild inconvenience that was about to befall him. Feeling emboldened for the first time in my Fortnite-playing life, I proactively went in for the kill. Theres something perverse in the amount of joy I got from shooting this unknown soldier with a tactical SMG, but now is not the time to unpack that. I looted his corpse for weapons - a rare pistol and a heavy shotgun - and made my way towards the ever-shrinking circle. Once there, I began looting in one of those weird garages attached to a house with no door to the actual house. I dont really need any more resources and I only build stuff if I have to, but turtling up in a room feels like tempting fate, you know? A stray shot into my shielded back breaks the silence. I run behind a black storage box for cover. I see someone running for me. I hop out with my assault rifle drawn. Somehow, Im still here. Now, Its just me and one other. Theyre not hard to find, given the giant wooden structure protruding from the middle of town. Slowly, I climb the steps. We exchange shots. I come out victorious. The victory royale splash screen appears on my screen, and I love Fortnite now.

I can only think of one other instance vaguely similar to this, where format had such a pronounced effect on my reaction to a piece of media. When I saw Alfonso Cuarons Gravity in theaters, I was transfixed by the films atmosphere. Sandra Bullocks fear and helplessness in the face of the infinite vacuum of space was palpable and easily felt thanks to the understated, but all-encompassing use of 3D. It was one of the best theater experiences Ive ever had. Watching the movie again on my couch, and it was just another decent film, and the issues with the plot became much more glaring. The delivery device completely shaped my opinion of the film. Nothing about playing Fortnite on a Switch should represent such a drastic shift. Its the same messy union of offbeat shooter and building mechanics. The increasingly voluminous weapons list is the same on every platform. If anything, the port is a little worse than the previously released versions. Nintendos design scheme is stretched to its limit by the myriad of options and menus Fortnite gives you access to at any given moment. (You really got to work to taunt on the Switch version of Fortnite.) Texture pop-in as you fall from the flying bus is noticeable. And playing with your friends is basically meaningless since communicating through Nintendos online service is a boondoggle. I shouldnt like Fortnite on Switch. And yet I love it now?

After a week of attempting to retrace my steps, Ive thought of a few theories as to how we got here. Its partly the newness factor. People havent had as much time to develop strategies or get used to the new control scheme. Its partly brand identity. A game this silly makes more thematic sense on a system with Splatoon 2, not Titanfall 2 (still the best FPS on the PS4 if were being real). Part of it might be that very few good games come out over the summer, so I have nothing else to spend my free time on, I dont know. I still think the game would be better if players that got lost in the storm were transformed into grotesque animal hybrids in the style of Annihilation, but this is okay too. (The skybox looks way too much like the Shimmer for me to not make this comparison.) Ive gotten sick of the jokey demand from gamers for every game ever made to be re-released on Switch, but maybe those people were on to something.