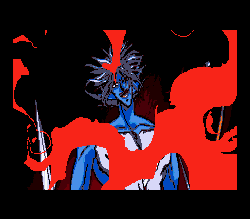 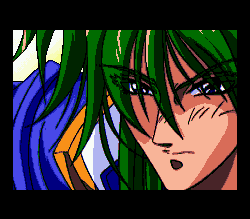 Those of you who played Arcus II: Silent Symphony already know about half-elf Pikt's epic battle against the demon lord Warren. Due to poor game design, the combat itself wasn't particularly special. However, the emotion behind the battle was unforgettable. On one side, a naive orphan crossed oceans and endured persecution to honor the memory of a father he never knew. On the other side, an indomitable miscreant fought to bring carnage, chaos, and justice to the world that screwed him over.

In Arcus 1-2-3, due to some expertly matched Mega CD music and cinematic visuals, Pikt's emotional confrontation against Warren is even more powerful than before. It's hard to shake the image of the blue-skinned demon's twisted face, laughing at Pikt from within a bed of flames. Victory in defeat -- it's a bittersweet finale.

Most of you wouldn't know anything about that. You see, by mid-1993, time had already passed Wolf Team by. Their parent company, Telenet, was hemorrhaging millions of yen and losing talented staff members by the month. Projects were quietly cancelled or quickly rushed to production to plug bleeding wounds. Telenet's collapse crippled Annet Again. It killed Apros: Castle in the Sky. The Mega CD dream was over.

...but somehow, Arcus 1-2-3, a revamped compilation of Wolf Team's entire RPG series, survived. Bumped from March to May and then to July, delayed to the brink of death, this CD finally saw commercial release (albeit in miniscule numbers). The game shines with love and care, as though the Sega side of Wolf Team knew this would be their eulogy. Unfortunately, judging by the lack of internet reviews (I did find one in Japanese), it has clearly been forgotten.

Similar to the Turbo Duo's well-known classic Ys Book 1 & 2, the Arcus games must be played in sequential order. Each of the three episodes stands alone as its own complete dungeon crawler (lasting 20 to 40 hours apiece), but they do build upon each other with progressively more complex dungeons, more challenging puzzles, and more dangerous creatures.

It all begins with an exciting vocal song about Jesus! After that... unusual... introduction, the real story begins, as many stories do, with a young knight-in-training. This particular knight is named Jedah Chaff. He soon meets a friendly thief named Toron and a drunken female mercenary named Erin. Fans of Arcus Odyssey take note -- you've seen some of these characters before! Each has their own unique and useful specialty; Jedah wields a RIDICULOUSLY powerful sword, Erin's chain-dagger can slice through an entire group of goblins, Toron is an expert at disarming poison gas traps (or hiding like a cowardly hobbit), wizards and sorceresses cast powerful and decently-animated spells, archers can pick off enemies at any range, and Pikt... well, 12-year-old Pikt summons the spirits of nature. As in The Bard's Tale, summoned dragons, golems, or Arabian spirits temporarily join the party and behave like an additional character. 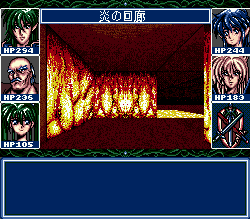 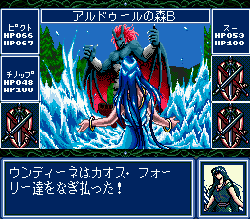 Their first quest is to find and appease the golden dragon "Rig Veda". Wolf Team often waxes philosophical in their games, and Arcus is no exception. This time around, they've crafted a story about the evils of war: the golden dragon sits in judgment of the world, and it's up to the heroes to prove humanity's worth. Although the concept isn't entirely original, it makes for an unusually reflective journey that often seems more concerned with exploring the nature of humanity than with saving the world.

Although several of the visual scenes focus on action-packed swordfights, others instead highlight quiet, introspective moments. Imagine a beautiful midnight atop the magical tower of Miryuu: a clear, comfortable night of relaxation spent admiring the twinkling stars...

Erin: "What are you doing up here?"

Erin: "Am I disturbing you?"

Erin: "Jedah. What were you doing before you went on this journey?"

Jedah: "I lived with my father. Heh, sometimes I still think I can hear his voice, telling me what to do. How about you?"

Erin: "Haha, no. I've just always been alone, with no place to call my own. Thief...pickpocket... I've always struggled just to survive."

Erin: "I know it is. I was always miserable. But one day, I decided to do something about it. I wouldn't expect you to understand the loneliness that comes from having nothing to care about... but that's the pain I felt. That's why I took up this blade; I needed to find someone worth protecting."

You'd have to be a heartless beast to not be moved by the way Erin tells her story, to not notice the lingering nuances of her voice that betray the disdain she feels for the way she used to live.

Life never stays quiet for long, and this is no exception -- Jedah and Erin are about to be interrupted by their blonde bishounen arch-enemy! The original PC version of Arcus, released way back in 1988, lacked a compelling "villain" character. Sure, the golden dragon is lurking somewhere in the world, but Rig Veda represents an idea more than he represents a strong, tangible GUY TO HATE. For this compilation, Wolf Team has actually inserted the third chapter's villain into the first two episodes. So, during Erin and Jedah's quiet conversation, a familiar villain from Wolf Team's past appears in a red swirl of mist and unabashedly announces his presence:

Jedah: "Who the hell are you?"

He's quickly fought off by the group's combined efforts... but he'll appear again, and again, and again. Luan Khan's looming presence throughout the entire disc is a brilliant addition that gives the first chapter a stronger sense of purpose, adds unpredictable suspense (since you never know when he'll appear), and builds anticipation for the game's final battle. Khan is an expert swordsman, but his dark sorcery can twist the hearts of friends and force companions to turn against each other. Across the game's 13 years, from initial hero Jedah to final hero Pikt, Luan Khan is the glue that holds it all together. 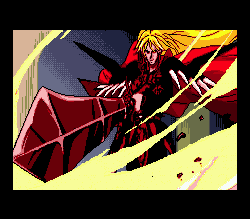 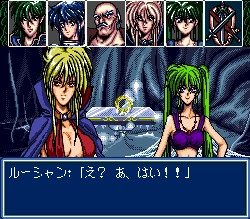 It won't be easy to reach Rig Veda, Warren, Luan Khan, or any of the other villains. Although the first few dungeons were very straightforward, chapter one's Ice Cavern -- a penultimate dungeon with multiple floors and stairwells -- was pretty confusing. When I completed the first chapter, and Arcus 2 began, I was surprised to discover that the second dungeon was a return trip to the Ice Cavern! This time, I was able to unlock a previously-barred door and enter the holy elven shrine, which turned out to be bigger and more puzzling than the Ice Cavern ever was.

The disc gets progressively bigger and more challenging as it continues, until Arcus 3 tosses you into complex networks of dungeons that can last hours on end. One starts atop a mountain, but a cave-in makes you fall underground. You'll work your way back above ground, then cross a series of bridges to escape and finally enter the next town, where you can rest and purchase new equipment. Combine the varied scenery with flip-switching, statue-turning, trap-disarming, and teleporting; this is one of the most complex dungeon crawlers I've ever played.

And really, that's why Arcus 1-2-3 succeeds; even though its story is deep, insightful, and engaging, it never forgets that it's a game. Even the combat becomes progressively more involved, to the point where random encounters require frequent healing and careful spell selection. Aside from some interesting visual effects, the battles aren't so much graphically impressive as they are mentally engaging. Along with the aforementioned spell management, each character is also able to "encourage" other party members (with actual voices!), which raises their level of willpower (which increases magical effectiveness). Whether it's adult Pikt curtly telling love interest Suu to "hang in there" or the miniscule fairy Ruu-Shan chattering away endlessly, this feature gives battles a unique sense of camaraderie that's missing from most dungeon crawlers. Each character has several different messages, depending on who they're trying to inspire.

As you defeat enemies in battle and gain levels (yes, unlike the disappointing Silent Symphony, this time Arcus has LEVELS), each character undergoes a complex series of promotions. At level ten, Pikt can become either a knight or a spirit fighter; if you choose "knight", he might later become a warlord or paladin... but if you choose "spirit fighter", he's walking the path towards elementalist or summoner. Each new promotion affects vital statistics, spell selections, and even the weapons that a character can use. This allows for a lot of experimentation. I know I'll be playing the game again, and I'm eager to see how my choices affect character development the next time through.

After exploring over three dozen dungeons, after defeating mad kings, demonic armies, and even close friends, everything ends with an immensely satisfying (and difficult) finale that makes a poignant statement about taking responsibility for those you love. It also ties every loose end together in a convincing and surprising way. There are revelations that I never saw coming, revelations which fill plot holes that most games wouldn't even acknowledge. How did Luan Khan get hold of the mystical sword "Bloody Rose"? The last time we saw that blade, it was in the hands of that crazed devil Warren...

Play Arcus 1-2-3 to the end and you'll find the answer. You'll also find a deep and complex series of dungeons, a legendary soundtrack, an intricate system of character advancement, humorous dialogue, serious discussions, and a story that actually means something.

Wolf Team could have simply ported the PC versions to disc. They could have just slopped all three chapters together and said "here's your compilation". But instead, they re-worked and re-tooled three disconnected adventures to create a unified, meaningful whole. Someday, I'll search the internet again. I hope that instead of one review, I'll find a hundred. Then, I'll know that I'm not alone; I'll know that others heard Wolf Team's cry.

If you enjoyed this Arcus 1-2-3 review, you're encouraged to discuss it with the author and with other members of the site's community. If you don't already have an HonestGamers account, you can sign up for one in a snap. Thank you for reading!

© 1998-2021 HonestGamers
None of the material contained within this site may be reproduced in any conceivable fashion without permission from the author(s) of said material. This site is not sponsored or endorsed by Nintendo, Sega, Sony, Microsoft, or any other such party. Arcus 1-2-3 is a registered trademark of its copyright holder. This site makes no claim to Arcus 1-2-3, its characters, screenshots, artwork, music, or any intellectual property contained within. Opinions expressed on this site do not necessarily represent the opinion of site staff or sponsors. Staff and freelance reviews are typically written based on time spent with a retail review copy or review key for the game that is provided by its publisher.