Its weird because even though Ive jealously championed Legend of Dragoon for years, I can totally see why people wouldnt like it. It has a god-awful translation that turns some lines into pure gibberish; the plot is slow going and filled with genre tropes, and the majority of the cast can comfortably be described as cardboard. The battle system employs timed button presses to initiate combos and, while it does provide a welcome break from the static menus of norm, its just a more adventitious way of mashing X to attack. The graphics are a mixed bag, providing stunning backdrops that are haphazardly traversed by ugly, blocky character models, broken up with the best CGI cut-scenes of its generation. The sporadic voice acting is as bad as youll ever hear.

And yet, I love it. I play it every year or so and, while the critical part of my brain that landed me this gig dreads these playthroughs, I have a blast and look forward to doing so again the next time I dust the disks off. Dont get me wrong; I could tear this game to shreds, making fun of its goofy mistakes and the sheer mountain of clichés you need to wade through in the early going of the plot. In fact, just to prove it, I will. Protagonist, Dart, starts off the game on the hunt for a legendary evil that killed his parents via evilness, but decides to return to his adopted village to catch up with old friends and recharge his batteries. BUT! On the way there, oh god no, he sees that the town is on fire and rushes to the site in a panicked rush. The eventual and obligatory outcome is that his childhood friend, Shana, has been kidnapped and taken away to a well-guarded prison that hell have to bravely wade into to rescue the damsel in distress. 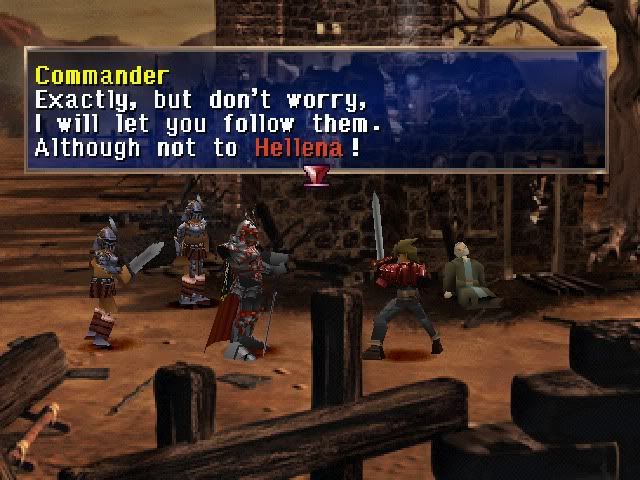 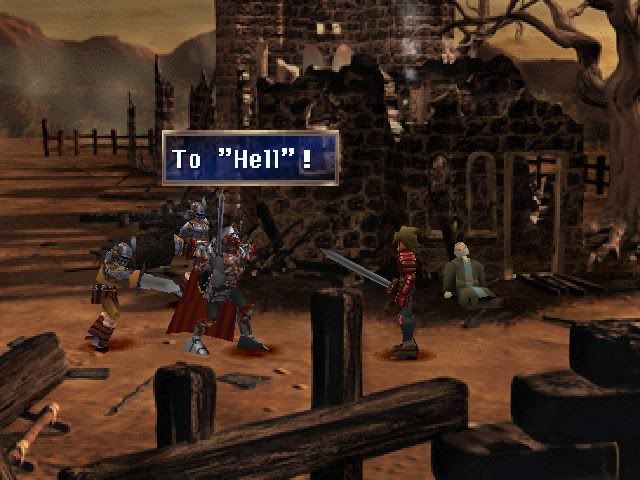 Hell have to fight a few guards left amongst the burning village and listen to the final words of friends so important the game doesnt even bother giving them names. His old combat instructor survives, of course, so hes able to remind young Dart about fighting and therefore slip in a quick intrusive fighting tutorial. With a manly tear in his eye, off stomps Dart to kick some arse and get him back his girl.

Of course, Im missing something out. On the way to the razed village of Neet, Dart stumbles across a 100-foot tall praying mantis just kinda wandering around the woods. While hes saved by a mysterious stranger wholl totally become vital to the plot later on, it takes back seat to the discovery of a multi-storey insect ambling about. His name is Feyrbarnd, and hes better than you! a dragon. 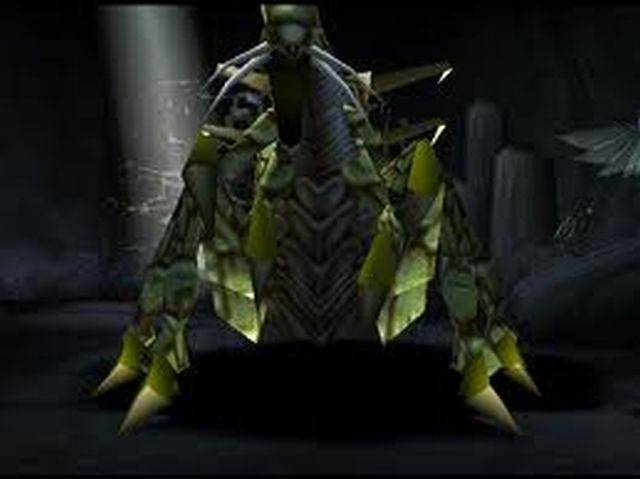 As if to make up for the librarys worth of expected tropes the game employs, when it comes to dragons, traditional designs are often scrunched up and tossed casually over the shoulder. Though this doesnt always work -- the worst looking of the legendary beasts resembles an angry head of cabbage  it illustrates LoDs biggest selling point. Regardless of what shenanigans might be happening inside it, Legend of Dragoon presents a world that could not give a damn about your standard conventions. Its not just another collection of medieval backdrops set against poverty and annoyingly perfect stone masonry. Its an actually world, with it own sense of history and development. It takes the time to establish itself, to show how the world has changed the people within and the small pockets of civilisation they choose to live in.

Its set in a civil war. Thats pretty cliché, I grant you, especially when it has obligatory naïve and young king on one side, and power-hungry and angry king ruling the other, but things come to a head at the town of Hoax. This town used to be a military outpost thousands of years ago, but has long since been converted by people looking for a place to live. As such, spawning armouries and command points are now humble homes full of occupants not overly excited by the armoured platoon that turns up on the doorstep. A platoon that includes Dart, since-rescued Shana and knight captain Lavitz SLAMBERT.

Military intelligence are sure the former stronghold is so strategically vital it will be one of the first places to be hit, and the occupants are understandably worried. They cower back in their homes as you, the JRPG protagonist, root through their stuff taking anything of interest and being strangely aroused by open fireplaces. Things seem peaceful at first, as Dart and SLAMBERT take the nightshift watch. Theyre pretty chill about the whole thing, as it happens, chatting casually and offering up logical reasons as to why they currently exist in a bubble of safety. 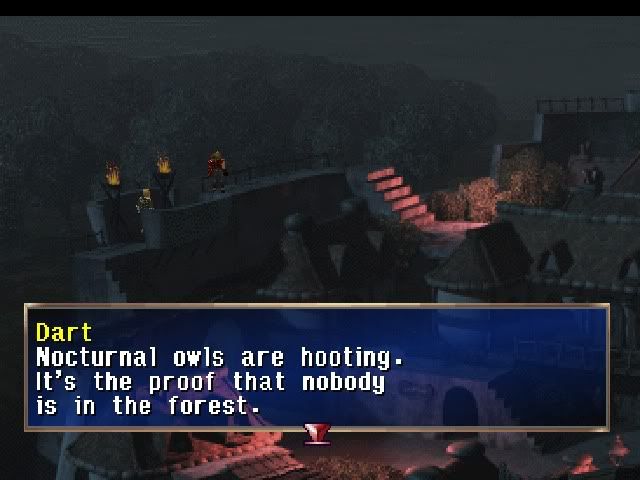 Then, of course, theyre promptly attacked.

Even this little slice of the game offers up a lot of small, subtle ideas that make it stand out. Your first big test is an elite solider who summons clones of himself to battle alongside him. Though the game doesnt point it out, you can always tell who the true target is by the larger shadow it casts. Eventually, youre forced to do battle with a hulking behemoth waving around an axe taller than you. He hits hard, absorbs damage like its nothing and counter-attacks your failed combos. Legend of Dragoons addition system sees you dish out differing levels of damage based on time button presses. For the most part, if you miss one, you deal less damage. In this fight, if you miss one, you get a man-sized axe lodged in your cranium.

Though no other enemy is (thankfully) able to replicate this feat, they will try to throw in counterattacks of their own, forcing you to hit a different button in order to stop them slicing you up mid combo. LoD also employs magic attacks atypically from the genre norm. Here, magic is much more regulated, each character only have access to three or four spells that make up for their low numbers by actually serving purpose. Some spells can cut all party damage by 50% for three turns, while others offer full heals, revives, status annulments and general well-being all wrapped up into one. Lower tier attacking spells do start to lose their usefulness as the game progresses, but dont stop being undeniable cool. Darts very first spell sees him summon a globe of magical flame, and cannonball it through the target. Before this, he throws his sword up in the air then nonchalantly catches it again after the fireball emerges on the other side of whatever hes just charred a fiery chasm through. 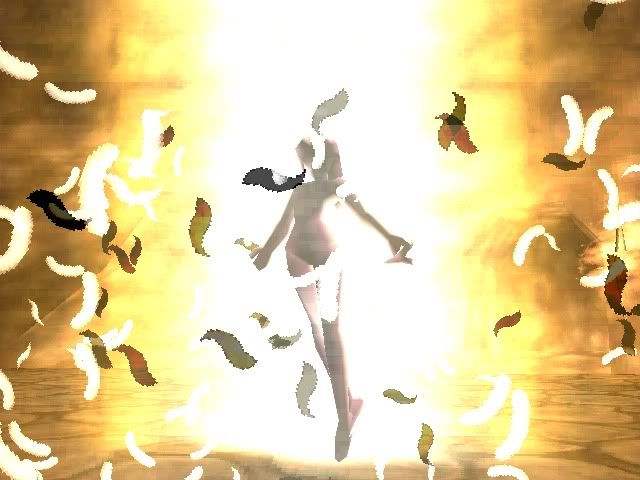 I could go on, so I will. Legend of Dragoon limits your inventory, not only because of the mass potency of the healing items (weakest one heals 50% of anyones HP) but to factor in a rarely seen slice of item management. You could throw caution to the wind and try to delve through the next dungeon with magical attack items, leaving your healing solely to Dragoon spells, or you could fill your backpacks with heals and struggle through battles that could have been made easier. Few RPGs limit you this way, instead allowing you to fill you infinite pockets with hundreds of such items, leaning heavily on them to waltz through the game. That it was avoided here is all the more noteworthy because LoD is already a game verging on the easy side, so any more help would have made it an insulting cakewalk.

But still a walk worth taking when you factor in all the title has to show you. Youll want to see the Valley of Corrupted Gravity, the site of a long-forgotten battle that has left the grounds flooded with residential magic. Or Lohan, the capitalistic hub of the world, containing a veritable hive of doorways, shops and houses that has since overgrown the limited space the town has to offer, and so makes everyday pathways out of roofs and drop-holes built directly into peoples floors. Or Fort Magrad, the former capital of humanity, since deserted and haunted by forgotten memories an old grudges. Or Zenebatos, a hollowed-out overly-legislated graveyard ruled by robots programmed to carry out an encyclopaedic set of laws millennia obsolete.

Still, this game has its flaws and it has its detractors, and I understand the existence of both. Legend of Dragoon is a game that takes its time to get running, wading through genre tropes like its an obligation, trying to get them out of the way so it can really start to tell its story. Thats a shame, and its initial fragility is often the last impression bestowed upon a gamer. But theres more to be discovered; Im not going to reel off a huge list, wed be here all day. And some things youll just have to discover on your own.

... alright, one last thing. You tell me the last time a video game went out of its way to bestow upon the player such valuable life advice: 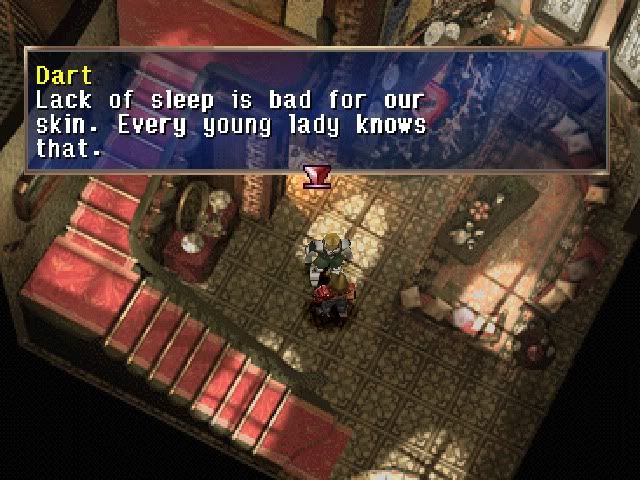 If you enjoyed this Legend of Dragoon review, you're encouraged to discuss it with the author and with other members of the site's community. If you don't already have an HonestGamers account, you can sign up for one in a snap. Thank you for reading!

© 1998-2021 HonestGamers
None of the material contained within this site may be reproduced in any conceivable fashion without permission from the author(s) of said material. This site is not sponsored or endorsed by Nintendo, Sega, Sony, Microsoft, or any other such party. Legend of Dragoon is a registered trademark of its copyright holder. This site makes no claim to Legend of Dragoon, its characters, screenshots, artwork, music, or any intellectual property contained within. Opinions expressed on this site do not necessarily represent the opinion of site staff or sponsors. Staff and freelance reviews are typically written based on time spent with a retail review copy or review key for the game that is provided by its publisher.