Ninja Gaiden 3 slashes its way to shelves in March 2012 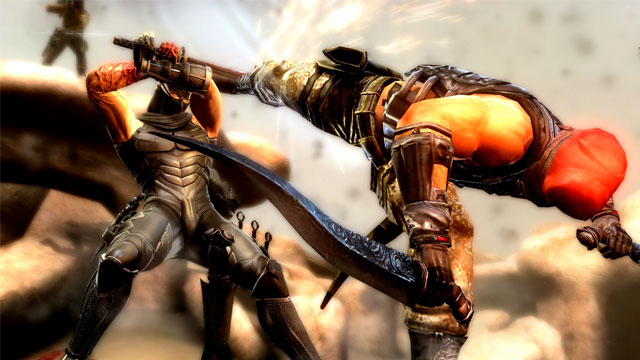 Speaking to a crowd of journalists in San Francisco today, Team Ninja head Yosuke Hayashi announced the Xbox 360 and PlayStation 3 versions of Ninja Gaiden 3 will hit retail shelves in March 2012.

Speaking to a crowd of journalists in San Francisco today, Team Ninja head Yosuke Hayashi announced the Xbox 360 and PlayStation 3 versions of Ninja Gaiden 3 will hit retail shelves in March 2012, according to Joystiq. A Wii U version will follow "at some point after that."

Players will once again take control of the legendary Ryu Hayabusa, in a tale in which they'll supposedly get to see and understand more about Hayabusa's character, which has been somewhat mysterious even after his two most recent console outings.

"For the first time, we'll get a look at the world through Hayabusa's eyes and find out what drives him to fight and kill," says a Tecmo fact sheet.

This time around, Ryu's adversary is a "mysterious man" with a "mysterious goal" and "mysterious powers." Tecmo promises Ryu's struggle with this fellow will blur the lines between good and evil forever.

Aside from the game's mysterious plot, it'll be interesting to see what type of control scheme Team Ninja whips up for the Wii U version of the game, considering the team announced PlayStation Move compatibility for the title back in August.

One thing is almost certain, of course: The game will probably make me go through another forty-seven controllers after I break 46 of 'em in frustration.

Are you looking forward to Mr. Hayabusa's next (mysterious) adventure?

© 1998-2021 HonestGamers
None of the material contained within this site may be reproduced in any conceivable fashion without permission from the author(s) of said material. This site is not sponsored or endorsed by Nintendo, Sega, Sony, Microsoft, or any other such party. Ninja Gaiden III is a registered trademark of its copyright holder. This site makes no claim to Ninja Gaiden III, its characters, screenshots, artwork, music, or any intellectual property contained within. Opinions expressed on this site do not necessarily represent the opinion of site staff or sponsors. Staff and freelance reviews are typically written based on time spent with a retail review copy or review key for the game that is provided by its publisher.