Shantae and the Pirate's Curse coming to 3DS eShop 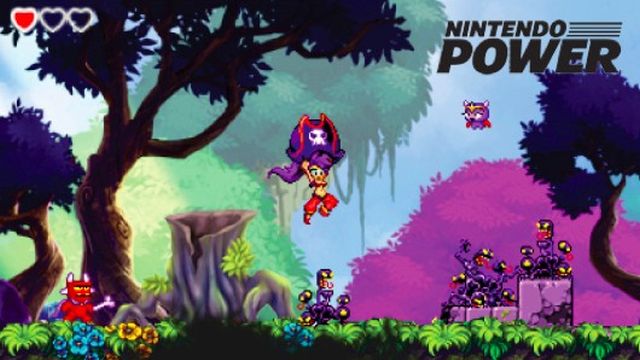 Shantae's lost her genie powers and only you can help her find them!

Your favorite game that none of your friends has played is getting another sequel!

Shantae and the Pirate's Curse stars WayForward's half-genie mascot, minus the genie. Shantae's genie powers have been stolen by 30 Tinkerbats that she must hunt down with the help of her pirate friend Risky Boots.

Without her powers, Shantae must use "Pirate Gear" to defeat enemies and access new areas, instead of her trademark dance powers. One new item is a set of bone daggers that she can throw into walls to make footholds for climbing.

The third game in the Shantae franchise (isn't it weird to say that?) will be available exclusively on the 3DS as a downloadable title from the eShop. You can see some screens on Nintendo Power's preview page, but will have to buy the issue to see them all. There are only a couple issues left, so throw them a bone!

If you enjoyed this Shantae and the Pirate's Curse article, you're encouraged to discuss it with the author and with other members of the site's community. If you don't already have an HonestGamers account, you can sign up for one in a snap. Thank you for reading!

© 1998 - 2022 HonestGamers
None of the material contained within this site may be reproduced in any conceivable fashion without permission from the author(s) of said material. This site is not sponsored or endorsed by Nintendo, Sega, Sony, Microsoft, or any other such party. Shantae and the Pirate's Curse is a registered trademark of its copyright holder. This site makes no claim to Shantae and the Pirate's Curse, its characters, screenshots, artwork, music, or any intellectual property contained within. Opinions expressed on this site do not necessarily represent the opinion of site staff or sponsors. Staff and freelance reviews are typically written based on time spent with a retail review copy or review key for the game that is provided by its publisher.