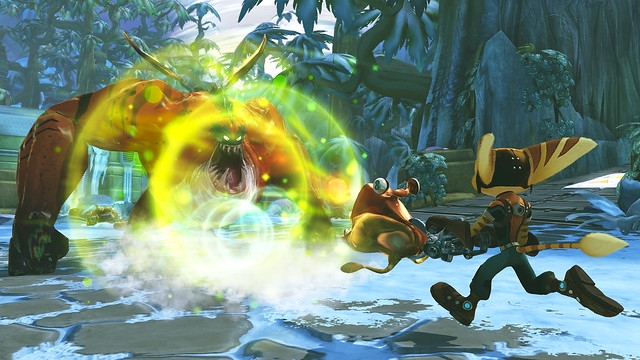 Look forward to this fun-size title on your PS3 AND Vita!

To celebrate the anniversary, Sony prettied up the original PS2 R&C releases in the HD Ratchet & Clank Collection for PS3 earlier this year. Continuing the festivities, Ratchet & Clank: Full Frontal Assault will be available on the PlayStation Store and retail for $19.99 on November 27. The game was originally set to be a PSN exclusive, but in response to fan outcry Sony will be releasing physical copies on the same day.

Both versions will support cross-buy, meaning buying the PS3 edition will allow you to play the same game on your Vita and vice versa. Full Frontal Assault is a "fun-size" adventure, which explains the low price. Though, Sony promises "tons of new features," like the new base assault and defense elements, online/split-screen co-op, and competitive modes.

If you enjoyed this Ratchet & Clank: Full Frontal Assault article, you're encouraged to discuss it with the author and with other members of the site's community. If you don't already have an HonestGamers account, you can sign up for one in a snap. Thank you for reading!

© 1998 - 2022 HonestGamers
None of the material contained within this site may be reproduced in any conceivable fashion without permission from the author(s) of said material. This site is not sponsored or endorsed by Nintendo, Sega, Sony, Microsoft, or any other such party. Ratchet & Clank: Full Frontal Assault is a registered trademark of its copyright holder. This site makes no claim to Ratchet & Clank: Full Frontal Assault, its characters, screenshots, artwork, music, or any intellectual property contained within. Opinions expressed on this site do not necessarily represent the opinion of site staff or sponsors. Staff and freelance reviews are typically written based on time spent with a retail review copy or review key for the game that is provided by its publisher.