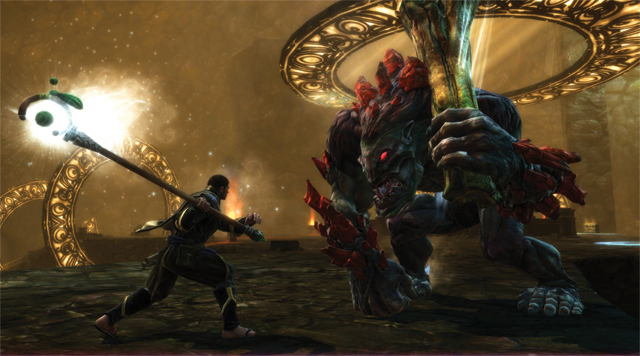 Rhode Island has officially been the owner of the Kingdoms of Amalur intellectual property since 38 Studios' demise earlier this year. The state is now anticipating to have the IP sold "over the next three to six months," according to a Joystiq report.

Richard Land, an attorney and the court-appointed receiver in an action held yesterday at 38 Studios' former headquarters, told Joystiq the Amalur IP will most likely be a negotiated transaction, unlike the recent auction, though he did admit "the process is not yet in stone."

As for the auction held at 38 Studios yesterday, Joystiq reports that 95 percent of the items available were sold; a final gross sales figure has yet to become available, however. There were more than 1,000 participants at the auction, both in person and online.

A similar auction held last week at the formerly 38 Studios-owned Big Huge Games brought in $180,000 -- but that's only an extremely small fraction of the company's estimated $21.7 million in assets and an even extremlier smaller fraction of the $150.7 million the studio owes, according to the Associated Press.

We've mentioned before what a horror story this must've been not only for those employed by 38 Studios, but also for Rhode Island's taxpayers. If there is any silver lining to be found here, though? Once the Amalur IP is sold, there is a possibility of a new Amalur game being made.