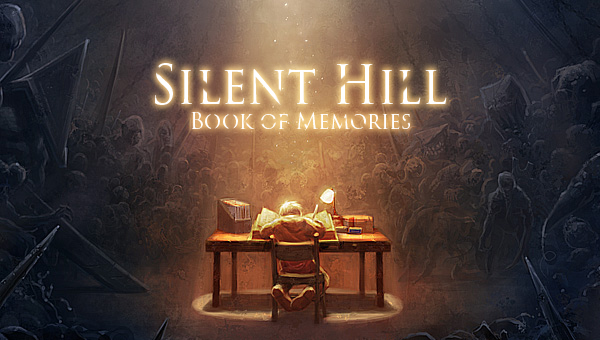 What does the name Silent Hill mean to you?

Way Forwards Silent Hill: Book of Memories hits Vita October 16, but you can get an early taste of it now on PSN. However, if you dont have a Vita yet, have no internet access, or are just plain too damn lazy to download it you can check out my impressions of the demo right here.

The demo starts as our young hero receives a mysterious package labeled only with, From: Silent Hill. In the box is a book. A book of memories. His memories. Everything thats ever happened to him is detailed in this tome. So, just as any of us might, he modifies the passages somewhat. The protagonist is a custom character you create. There arent many options outside of male or female and a few preset outfits such as preppy, goth, jock or bookworm.

Silent Hill games tend to have shallow play mechanics to make way for the story. Fans tend to return to the series to be scared and explore the world of Silent Hill and its dark themes. Book of Memories takes a different approach.

Right from the get-go I was a bit worried. Terms like leveling up and stats" are being thrown around. RPG elements are the furthest gameplay elements from Silent Hill in my mind, but Im always open to new takes on a classic. The player collects weapons, just as in any Silent Hill, but here you have two hands with which to dual wield weapons. Normally the weapon system is intentionally difficult to make combat more stressful and intense. In BoM our hero can wave around a wooden plank and a meat cleaver at once like he's Kratos. Book of Memories is a co-op dungeon crawler. You and your party find items and loot as you progress through rooms and hallways while defeating enemies. In addition to the loot are notes and TV broadcasts that reveal backstory for the characters. As you move on youll learn more about your character, the darkness in their past and why theyre being drawn to Silent Hill. Some of the plot revealing elements like rooms that reveal terrible memories can be solved in different ways, affecting the outcome of the sequence. Your choices in the game affect the ending, much like any Silent Hill. There are also puzzle pieces scattered throughout the dungeon. At the end youll assemble them with the touch screen to complete the level.

Items are collected through challenge rooms placed throughout the dungeon. In the demo, pretty much every challenge consisted of, Kill X number of guys in X amount of time. Then I proceeded to swing my plank of wood, knife, sword or mace willy-nilly until all the people in the room were dead. This got pretty boring and repetitive really fast -- and this was just the demo! Lets hope Way Forward found more interesting and different ways to switch up the gameplay for the whole game or it can feel like a real slog.

Co-op will liven things up a bit, but from what I saw in the demo the play mechanics seem pretty shallow. Yes, I previously mentioned shallow mechanics as a good part of Silent Hill, but the best entries in the series like Silent Hill 2 have great story, characters and atmosphere to drive the game. Book of Memories seems to focus on the hack-and-slash button-mashing way more than other SH games.

Silent Hill: Book of Memories seems like it could be a competent co-op dungeon crawler. I say could be, because most of what I saw in the demo felt kind of bland and repetitive. Even if the gameplay turns out to be great, this demo just begs the question: Why is this a Silent Hill game? Silent Hills main trademarks are atmospheric worldbuilding and an immersive sense of constant dread. The only thing Book of Memories has in common with SH is that the walls are dirty.

Other than a few bits of recognizable iconography, Book of Memories doesnt seem to share much in common with Silent Hill. The conceit for the story is interesting enough, but its yet to be seen how well that will play out in the full campaign. Health packs and ammo are plentiful and the focus is heavily on combat. Something about dual-wielding twin revolvers doesnt seem very Silent Hill to me.

I understand this is a spinoff and Im not saying a franchise shouldnt change and evolve over time. But why use the series name if youre ignoring its main hallmark? Ask anyone what Silent Hill boils down to in one word and theyll tell you, scary. Book of Memories doesnt even attempt to do that and feels a bit like a generic dungeon crawler cashing in on the name.

But hey, this is just a demo. Maybe the full game will be great! Well see in two weeks.

If you enjoyed this Silent Hill: Book of Memories article, you're encouraged to discuss it with the author and with other members of the site's community. If you don't already have an HonestGamers account, you can sign up for one in a snap. Thank you for reading!

© 1998-2021 HonestGamers
None of the material contained within this site may be reproduced in any conceivable fashion without permission from the author(s) of said material. This site is not sponsored or endorsed by Nintendo, Sega, Sony, Microsoft, or any other such party. Silent Hill: Book of Memories is a registered trademark of its copyright holder. This site makes no claim to Silent Hill: Book of Memories, its characters, screenshots, artwork, music, or any intellectual property contained within. Opinions expressed on this site do not necessarily represent the opinion of site staff or sponsors. Staff and freelance reviews are typically written based on time spent with a retail review copy or review key for the game that is provided by its publisher.