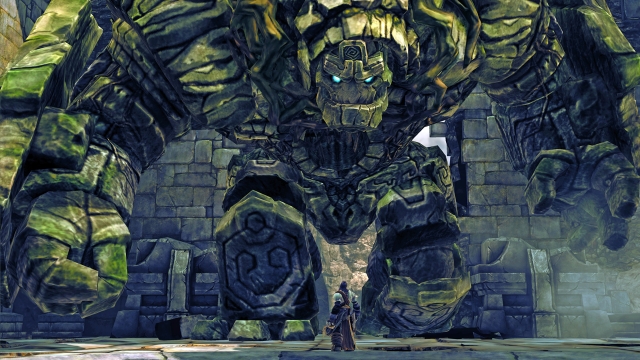 Launches alongside the Wii U on Nov. 18.

We already knew Darksiders II would be a Wii U launch title when the system launches on Nov. 18. Today, we also know the Wii U version of Vigil Games' adventure title will pack about five hours of extra content, according to a Game Informer report.

THQ says Darksiders II on Wii U will not only include the yet-to-be-released Argul's Tomb downloadable content, but also include pre-order bonuses for other versions of the game. That'll make up the five extra hours of gameplay THQ is touting, but that's not all! Wii U players will also be treated to new legendary weapons and armor in their version.

Aside from this extra content, Darkiders II on Wii U will take advantage of the Wii U GamePad and let players use the pad's touchscreen to display the game's map and list of objectives, as well as use motion controls to manage Death's evasion and swimming abilities.

If you enjoyed this Darksiders II article, you're encouraged to discuss it with the author and with other members of the site's community. If you don't already have an HonestGamers account, you can sign up for one in a snap. Thank you for reading!

© 1998-2021 HonestGamers
None of the material contained within this site may be reproduced in any conceivable fashion without permission from the author(s) of said material. This site is not sponsored or endorsed by Nintendo, Sega, Sony, Microsoft, or any other such party. Darksiders II is a registered trademark of its copyright holder. This site makes no claim to Darksiders II, its characters, screenshots, artwork, music, or any intellectual property contained within. Opinions expressed on this site do not necessarily represent the opinion of site staff or sponsors. Staff and freelance reviews are typically written based on time spent with a retail review copy or review key for the game that is provided by its publisher.