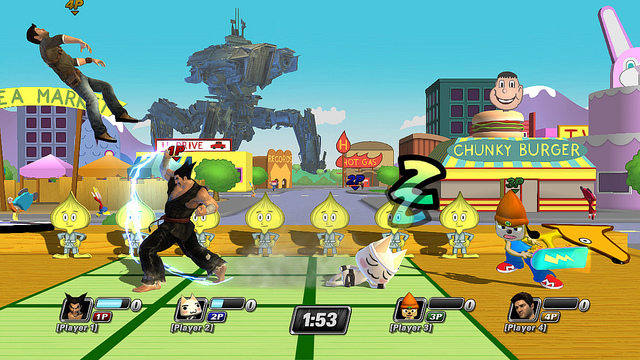 But he's gotta believe in a new PaRappa game.

Rodney Greenblat, character designer for PlayStation classics PaRappa the Rapper and UmJammer Lammy, stated his feelings on PaRappa's inclusion in PlayStation All-Stars Battle Royale in an interview with Not Enough Shaders.

When asked what he thought of the rapping dog's revival Greenblat stated, "Im very happy that Parappa is making a bit of a comeback, but not so happy about him being in a weapon filled battle game." At least while other characters like God of War's Kratos use their signature weapons, PaRappa remains true to his roots and his moveset doesn't use any.

Greenblat does mention that Battle Royale is a fun game. Though I'm sure he's disappointed in the game's lack of sick beats and mad rhymez.

"My hope is that Sony realizes the golden true potential of PaRappa and asks me to design some new games. Ive learned a lot, and I think PaRappa could be great again."

Read the full interview at Not Enough Shaders and look forward to PlayStation All-Stars Battle Royale on PS3 November 20th.

If you enjoyed this PlayStation All-Stars: Battle Royale article, you're encouraged to discuss it with the author and with other members of the site's community. If you don't already have an HonestGamers account, you can sign up for one in a snap. Thank you for reading!

© 1998-2021 HonestGamers
None of the material contained within this site may be reproduced in any conceivable fashion without permission from the author(s) of said material. This site is not sponsored or endorsed by Nintendo, Sega, Sony, Microsoft, or any other such party. PlayStation All-Stars: Battle Royale is a registered trademark of its copyright holder. This site makes no claim to PlayStation All-Stars: Battle Royale, its characters, screenshots, artwork, music, or any intellectual property contained within. Opinions expressed on this site do not necessarily represent the opinion of site staff or sponsors. Staff and freelance reviews are typically written based on time spent with a retail review copy or review key for the game that is provided by its publisher.