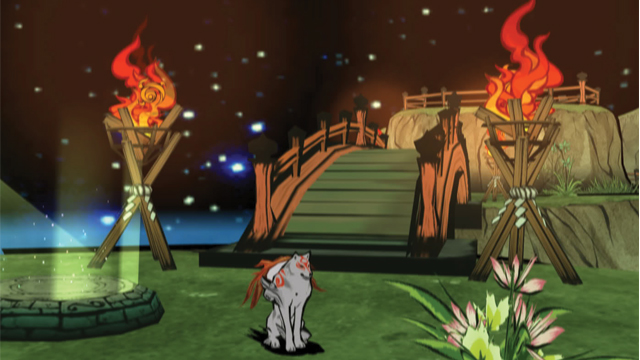 No North American or European news yet, though.

[UPDATE: Literally as soon as I posted this, I received a press release from Capcom announcing Okami HD for North America. The $19.99 title will be a PlayStation Network download and, of course, still include Move and 1080p support. However, while a Nov. 1 was confirmed by Famitsu for the title, Capcom did not offer anything more specific than "fall" for Okami HD.]

Clover Studios' beloved 2006 title Okami is getting the HD treatment in Japan, according to a Famitsu report, as translated by Andriasang. It'll hit the PlayStation 3 on Nov. 1.

The HD remake, called Okami Zekkie-ban, which translates to "Okami Magnificent Version," will also feature PlayStation Move support and full 1080p visuals, according to the report. Buyers of the first run of the game will also feature a code for a Play View version of an Okami-based book.

No mention was made of a North American or European release of the game, which aside from its initial PlayStation 2 iteration, also has a Wii port. Both versions of the title achieved critical success, with critics loving the game's hand-painted visual style and Zelda-like gameplay.

If you enjoyed this Okami HD article, you're encouraged to discuss it with the author and with other members of the site's community. If you don't already have an HonestGamers account, you can sign up for one in a snap. Thank you for reading!

© 1998-2021 HonestGamers
None of the material contained within this site may be reproduced in any conceivable fashion without permission from the author(s) of said material. This site is not sponsored or endorsed by Nintendo, Sega, Sony, Microsoft, or any other such party. Okami HD is a registered trademark of its copyright holder. This site makes no claim to Okami HD, its characters, screenshots, artwork, music, or any intellectual property contained within. Opinions expressed on this site do not necessarily represent the opinion of site staff or sponsors. Staff and freelance reviews are typically written based on time spent with a retail review copy or review key for the game that is provided by its publisher.