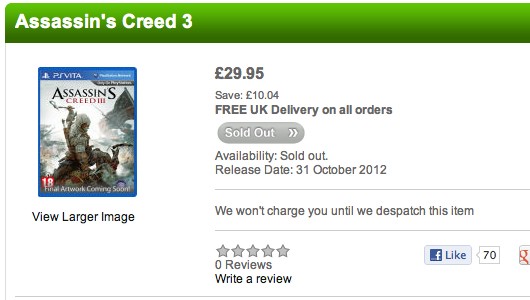 UK retailer Zavvi is pretty sure that Assassin's Creed III is getting a Vita release.

Zavvi has posted a product page for an unannounced Vita version of the game, complete with box art. It's listen for £30 after a £10 discount.

Along with the usual PS3, Xbox 360, and PC versions announced earlier this year, Assassin's Creed III was also confirmed for Nintendo's upcoming Wii U. This Vita version would be the only handheld version of the game.

Ubisoft did announce that a Vita Assassin's Creed was in development last August, but they didn't reveal whether it would be a spinoff or a mainline entry in the series.

Zavvi also had a listing for Ghost Recon: Final Mission for Vita, a game that hasn't actually been announced for any platform, but that listing has since been removed.