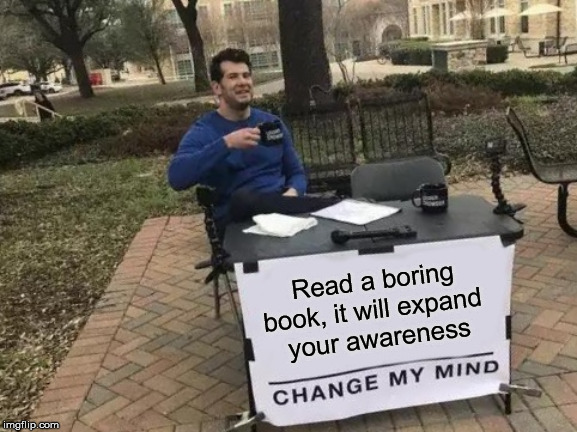 This was on the heels of reading The Mueller Report, which can be had in PDF format for the audacious price of free. Admittedly I found The Washington Post's publication useful for its editorial, summary and additional references. Legalese I can handle, but there are deeper frameworks of judiciary logic that one needs some time to grasp. Ultimately though, the evidence is plain even if you finish the book and don't recall much - if any - of the legal requirements Mueller and his team had to employ.

The point is that I feel that I stand on solid ground with regards to something that affects me, and affects everyone. This has lead me to pick up other books such as the works of Churchill, (Volumes II, III and VI), and Eisenhower 1956, concerning a world war he and his administration prevented during his administration. He was a militarist who had designs in putting a stop to Republican political and material greed, and largely seen as mostly harmless. Thanks to the fairly recent declassification of certain documentation, it's become clear there's more to his presidency than historians have previously recounted.

I didn't expect to land so squarely on history as a particular subject of interest, but here I am. I have plans this fall to achieve a passing grade for my college entrance math course, and then pursue history and English literature studies in the coming months and years. My long term goal is to become a professor of these subjects. Sounds kinda funny, doesn't it? It does amuse me, even though it feels wholly appropriate.

While games have provided me much in the way of personal growth and mental stimulation, I've been guided to a subject that will expand my personal horizons well beyond what gaming can provide. History is on the low end of the participant scale in colleges and universities, I hear tell, but it is vital that we not abandon the pursuit of the valuable facts as they are made available to us.