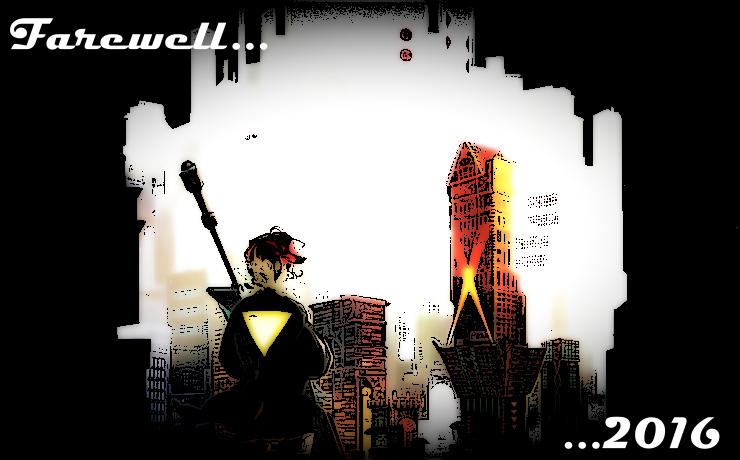 I dont see any point in sticking to whats popular; my backlog has too many excellent titles waiting in the wings to be explored. So, without further ado, I present my list of games I enjoyed  and why I enjoyed them - during the pre-apocalyptic year that 2016 as we bid it farewell. Presented in no particular order.

Stardew Valley
This is the gentleplayers counter argument to brutal action, white knuckle twitch play, terror and stress management. More of a life simulation with a farming focus, simplified and boiled down into a more digestible interactive reality. This game does a fine job of spreading the good will that seems in such short supply, these days. Breed animals instead of hate.

Gas Guzzlers Extreme
And then sometimes you do just want to blow stuff up. This arcade style racer cobbles together old school mechanics and a hard rock soundtrack for some adrenaline pumping action. Single and multi-player components ensure no one feels left out, and I got a kick out of turning some of the most renowned vehicles in the world into carnage deliverers on the track. LGR Duke all the way, baby.

Mutant Mudds Deluxe
Id had a taste of this 12bit platformer back on the 3DS and was pleased to see it made the jump to Steam. Precision play isnt always my bag, but I really got into the multi-layered level puzzles of this one. Pick up and go, cause MMD isnt waiting around for you to figure out the lore. This is a really nice change of pace and good reflex, strategy challenge. Also, the music is great.

Red Faction Guerrilla Steam Edition
I picked this one up in a bundle, saw the destructible environment and knew what I wanted to do. Smash everything. Its a hobby of mine  within my gaming hobby  to see what developers will allow to be broken in their games. Call it the Zelda Pot Smasher syndrome, if you want. The story is thorough but barely memorable. I dont remember the main characters name, but I do recall that he is responsible for a lot of damage and his main weapon is a hammer. Whats not to love?

Rogue Legacy
I tried to get into this one when I bought it, but it wasnt until a year later that I sunk my teeth into its paper thin premise and strong mechanics. It tries to have a story, but lets be real, thats not why were playing. Exploring the castle and upgrading your characters whilst choosing their lineage made me want a more stable character most of the time. I was glad to pick what I wanted and upgrade stats instead of relying on armor, which is darn hard to acquire anyway.

Shovel Knight
You knew this was coming. Its on almost everyones list. I am an avid fan of Jake Kaufmans music, but moreso his chip music  it just seems more pure to me. Yes, I bought the soundtracks, and though I havent yet completed the game ... there just arent any failing points I can think of. Free DLC campaigns, anyone? This makes a great gift for genre fans and new gamers alike; the love letter to gaming we all needed.

Transformers: Devastation
I had to wait for this one to come down in price, but I understand why it was so high. I think it removes players from the equation, but my freaking goodness is it satisfying! Platinums reputation as masters of the action genre is well deserved, and our favorite Generation One bots have never looked better. Apparently they knew how much fun it was going to be to beat Decipticons into scrap. Voiced by most of the original cast too boot and original soundtrack by Vince DiCola. This was my geek out moment of the year ... until Hasbro re-released Transformers The Motion Picture on Blu-ray. Theyve still got the touch.

Transformers: Fall of Cybertron
War for Cybertrons designs just arent as appealing as they are here, and that was a big neg in my department. Also, playing it now just shows how much High Moon learned that made Fall of Cybertron more epic than I expected. Commanding Metroplex? Pardon me while I quietly geek out. Blowing up robots in an over the shoulder shooter as seldom been so fun. Getting to play both sides of the war keeps things from becoming tedious, and campaign brevity is your best friend. You just dont know it yet.

Shadowgrounds
This grade B top-down alien shooter has you mad dashing through corridors in what is really a terrible game. No, it really is awful, and the sequel is even worse. Somehow I picked this up in a bundle, then tried it and started having fun with combat. The developers  probably unwittingly  found a focus in which the action was fun to complete even though the story was completely forgettable. Quality is not the measure of fun, friends. If youre curious, pick it up, but dont bother with the sequel  its just trying too hard.

Transistor
This is a dish you dont eat too often; something of a sensory overload from which you need to take a break in order to enjoy properly. I savour the memory more than my experiences playing, which probably tells you something. Its fantastic, excellent in every facet, but too much for momentary play. This is a game that gets you thinking and talking, and that is a good thing. Wholly wonderful and unforgettable.

DuckTales Remastered
Oh the flaws, they so easily obstruct what is an otherwise faithful tribute to the beloved NES classic. Wayforwards attention to detail and signature musical competence try so very hard ... and probably a little too hard. Jakes solos take it a step too far even though his overall execution of the original themes is a pleasure to the ears. The irony is that every other platformer by this team is superior, but I did have some fun with this one and recommend it  with the above caveats.

Renowned Explorers: International Society
So help me if the combat still doesnt make all that much sense to me, the game does appeal to the organizational-explorer within. Great aesthetic, interesting characters and a good variety of scenarios. Doing things differently for all the right reasons makes for interesting play, even if I just want to take my time with it. A solid change of paradigm that asks you to step out of your comfort zone.

Shantae and the Pirates Curse
I felt a little for Shantae when I found out shed lost her powers. This is what happens when you jump into a series after a lot of plot. Speaking of plot, thats a bit of sensitive issue, speaking of the way the characters are portrayed. However, Shantae is a solid - if imperfect - platformer with some clever humour and fun mechanics. Fun? Absolutely, and of course the soundtrack is one to add to your library.

Sid Meiers Ace Patrol
Just the right amount of aerial combat and simulation to be fun and not exhausting. I played through two campaigns quite before I knew how to fly with any tactical precision, but the difficulty allowed me to learn and the choice of missions scaled just enough to my low skill level. I enjoy the idea of simulations, but I seem to be terrible at understanding their take on cause and effect; this one reached me, and that is part of the job description. I tip my hat to you, Sid.

SanctuaryRPG: Black Edition
This one brought me back to my 1400bps modem days and HoloMUD. Yessir, I had some fun with that one. Similarly, Sanctuary evokes the nostalgia of ASCII art driven gaming before MMOs even existed. Easy to pick up but engrossing; humour, excellent text art and some really nice music to even things out. If someone hasnt got this running on an embedded system somewhere already, Im sure its possible.

Summary
See what happens when you just play what youve got? Were too hung up on the latest and greatest, and I insist that no console can meet our expectations. 2016 was an awful year for nearly everything, but it was flush with some of the best games ever made playable on the hardware you already own.