You will be facing tougher resistance soon, so the game sets you up to improve your arsennal. When you head to the campaign point on the map called "Foresight," you'll find yourself standing in front of a gun shop.


Your job now is to purchase a specific weapon, even if you don't think you'll need it. Head into the shop that is directly ahead of you once you reach the map point. Inside, you can press the button indicated to make a purchase. 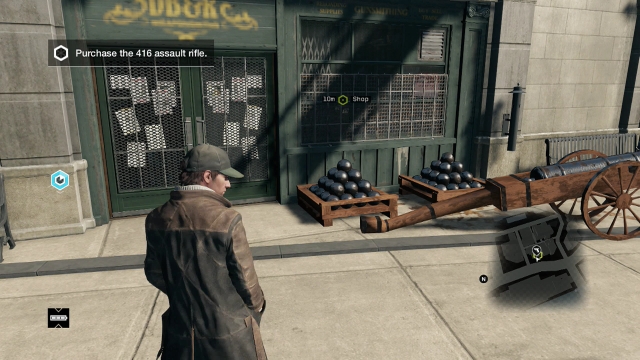 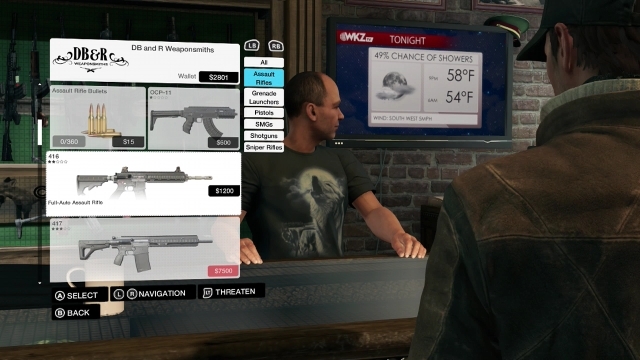 The 416 costs $1200, which shouldn't be a problem if you've been looting innocent pedestrians' savings accounts with your elite hacking skills. Buy the weapon. If you want, you can equip it right then and there to rob the store, taking back your $1200 from the register before you leave.

Outside, you can now select "Backstage Pass" on the map, which is handy because that's the mission you're actively trying to complete. Head there now.


When you get close to the campaign point, you'll be outside a restricted facility and an objective will appear, even if you're driving a car on the street. Your job now is to find a guard with the access code so you can safely get inside. You can try to run and gun, but you have equipment that makes that approach unnecessary and you might as well use it.

Start by looking for a camera near the front gate, or along one of the sides of the building. You can leapfrog around the cameras outside the facility, until one positioned on a high pole provides a view of an armed guard with explosives, standing outside the building near the base of an interior set of stairs. 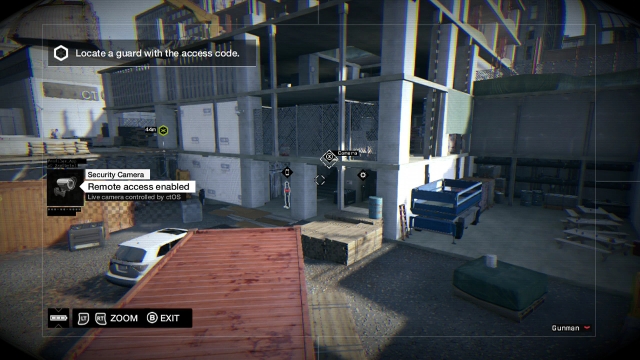 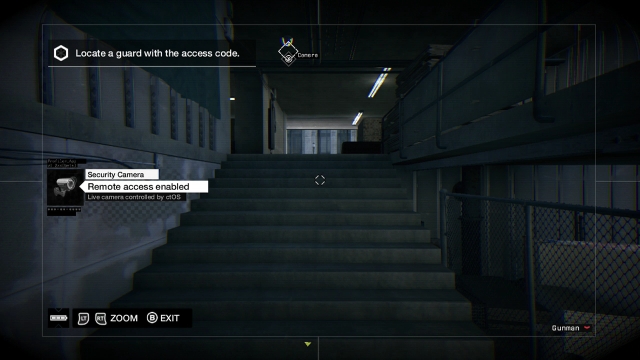 Now hack the camera over the guard's head. Hack into another one at the top of the stairs, and then hack into one that is located left from the top of those stairs. From there, look back the direction you came. At this new angle, you can see both the camera you just left and one to the left that is easy to miss. That one to the left is the one you need. 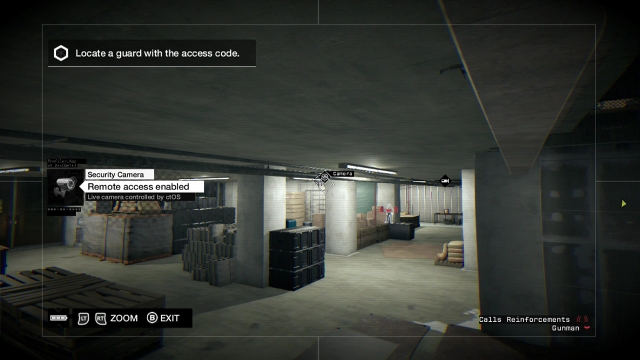 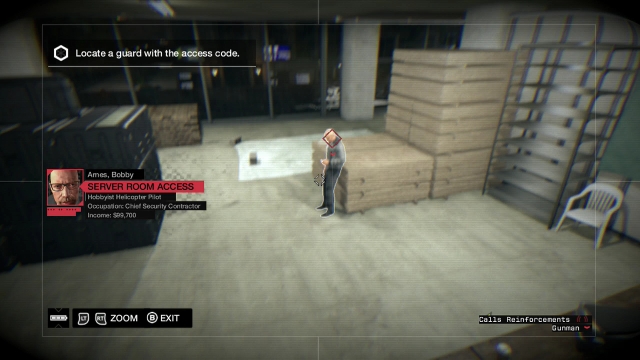 When you hack over to that camera, you'll see a guy standing near a pile of boards. A quick glance shows that he has the phone you need to hack.


Now just hack the guard. You'll immediately bring up the next objective.


Head back out to the camera at the top of the stairs. Look left and you can see guards. One is carrying a hidden camera as he patrols the area. Positioned on some nearby crates is a smartphone with a vulnerability. You can hack it to play sounds, which you should do now. 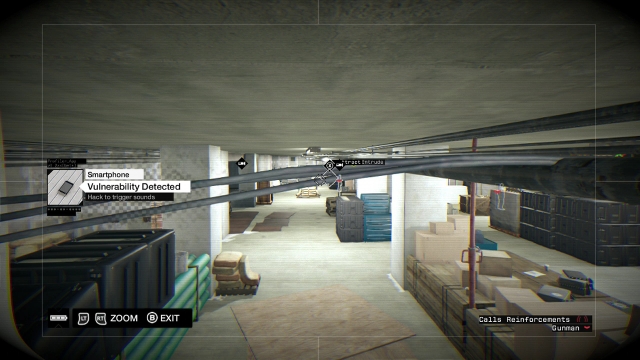 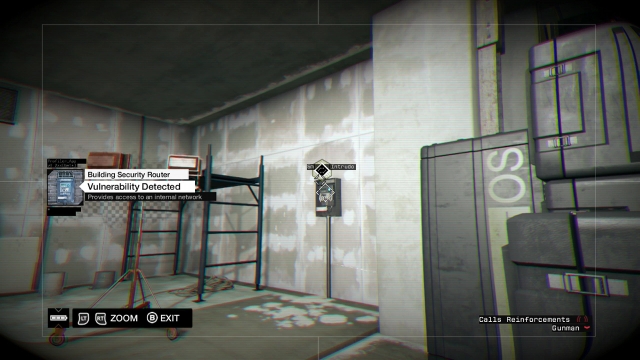 Hacking the phone will cause a guard to come over to take a look. It is the guard with a camera. Hack into the camera he is carrying on his person. Now, you should be able to see a wall with a fuse box of sorts attached. If it's the one you need, the word "Intrude" will be available while you are within range. You can press the button to hack that box, by way of a mini-game.

In the mini-game, you need to move the currents so that they connect to the locks. You do so by moving the cursor over the diamond-shaped boxes and pressing the indicated button to turn the shapes at the middle. 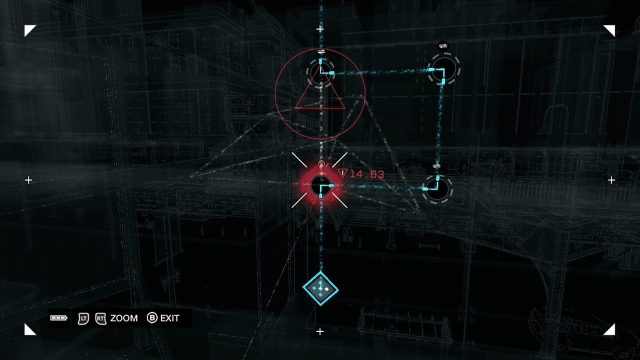 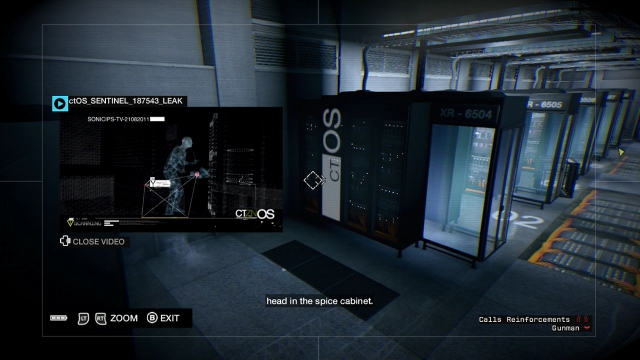 In the last phase, you will want to line up most of the pieces, and then you can twist the one that is surrounded by a red glow. That will give you 15 seconds of signal, so if all the other pieces are lined up, you can move to the lock in the upper right corner and disable it. When you have the current properly lined up along several such routes, you will gain access to a camera positioned in the servers.

Here in the server room, there are three video files that you can access, positioned along the server boxes. One is to the left, while two are on boxes to the right. Make sure that you hack those. Then finish up by hacking the Loop Control Center, located on the ceiling directly ahead.


Once you have successfully hacked the OS, a brief phone conversation follows. Then it's time to leave the vicinity before someone detects the intrusion and comes searching for you. The area is indicated by a gray circle on the map. Once you leave that radius, the mission concludes.

NEXT: Act I: Backseat Driver