Watch Dogs Guide > Walkthrough > Act I: Bottom of the Eighth

The game begins in the lobby of the Merlaut, with a cutscene. When it concludes, you have your first objective.


You will be walked through the process of pulling out your weapon and firing at the thug you found 11 months after the game's opening. 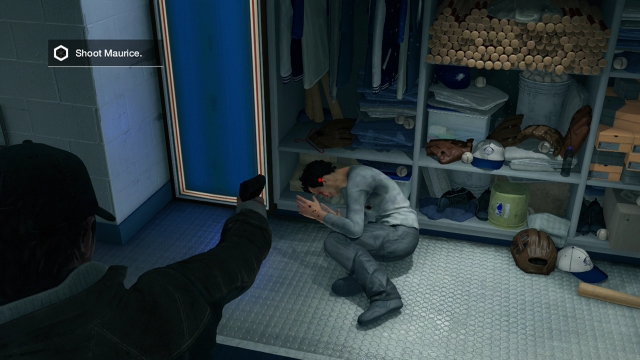 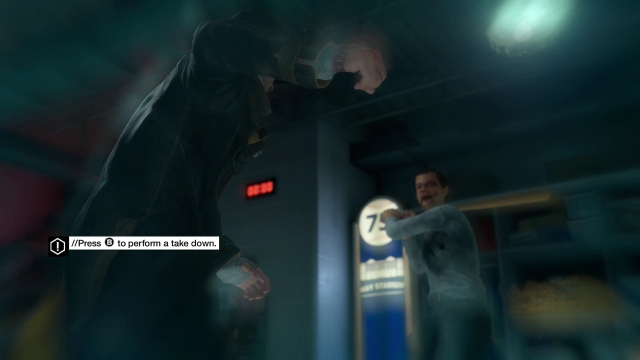 
Press the button indicated and hold it to hack the phone Maurice dropped when you clubbed him. A phone video message will play.

Leave the locker room when ready.


Now you need to vacate the premises. You can first check the shelving nearby to scan a System Key, plus there is cash on a shelf and a Chemical Component (in the jug near the sink). Meds are on a shelf just to the right of the exit door, and further to the right is a soda machine you can hack to make it eject some cans. They won't do you any good, however. Just go through the door when you have done everything you want in the locker room.

Start down the hallway from there, just a short distance, to trigger a cutscene.

Sneak past the Police.


The cutscene reveals that the police were called. Now, they're looking for you and you need to sneak past them.

You can head backwards to find an office with cash and a Chemical Component. The Police will carry on a conversation while you look around. Watch the on-screen radar, which lets you know where the police officers are positioned. You can take cover at the indicated cover points so they won't see you. 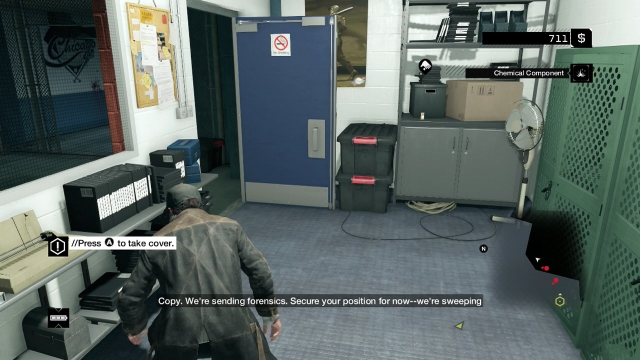 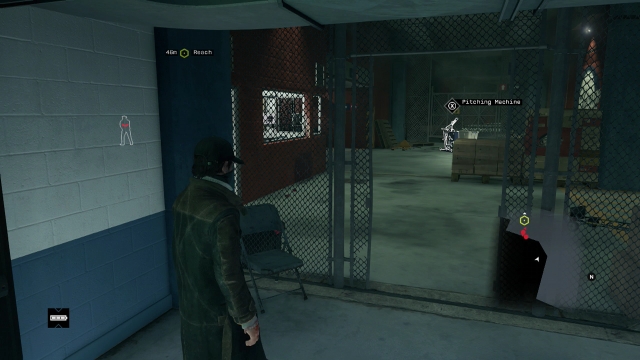 Nearby, there is a Pitching Machine. You can hack it from a distance, which will cause the nearest police officer to investigate the sound it makes. Then you can run around the outer hallway and sneak past the truck with the blinding light. There's a ramp that leads up and to the left from there, so start your way up it until you reach the indicated point.


You have reached your destination, but you can't get outside until you disable a camera. Fortunately, it's nearby. Aiden will look over his shoulder at the camera, making its location obvious. Press and hold the button indicated to hack it.


You should see a glowing white line on the wall, curving around the doors and passing through an overhead window. If you adjust the camera angle to see there, you'll also see a prompt that allows you to hack another camera. 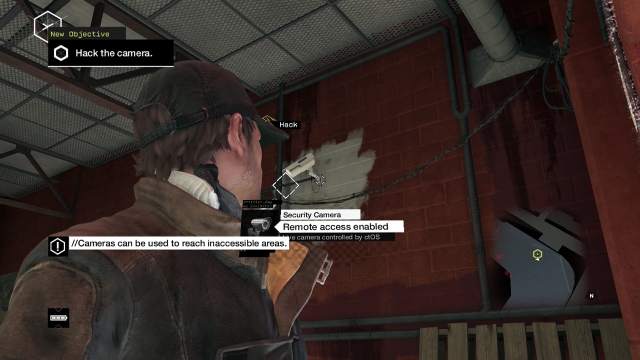 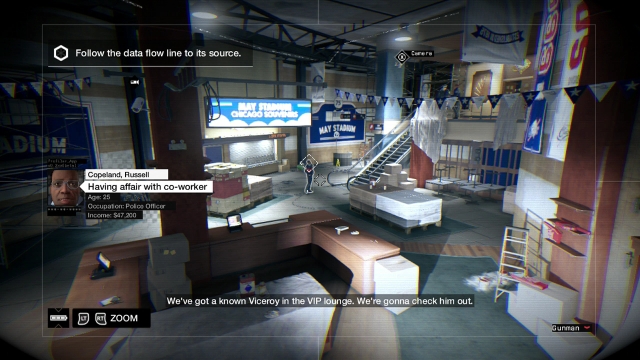 Once you hack that camera, you'll have to hack another one. Again, you can look around and you'll see the hacking prompt. Now some guards will converse, and you can see information about the people in the next room. There's another camera positioned on the blue column at the top of the stairs, so check and hack that to complete the objective.


Ahead of you now, on the lower level, you'll see a switch console with a detected vulnerability. Just press the indicated button to hack it.


You need to arrive at the upper level, which requires you to back out of the camera hacking process and return to where Aiden is standing near a door, looking at his phone. You can pass through it now, into the next corridor. However, don't run too far forward. There are guards ahead, as you already saw.

When you start through the door, Aiden will creep forward and take cover behind a counter. Nearby, there are Electronic Parts you can pick up with the indicated button. They are a crafting component. 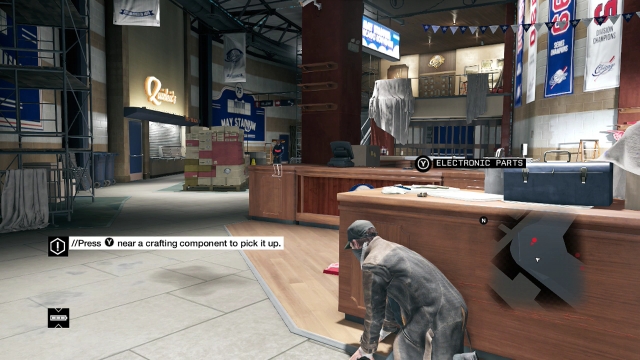 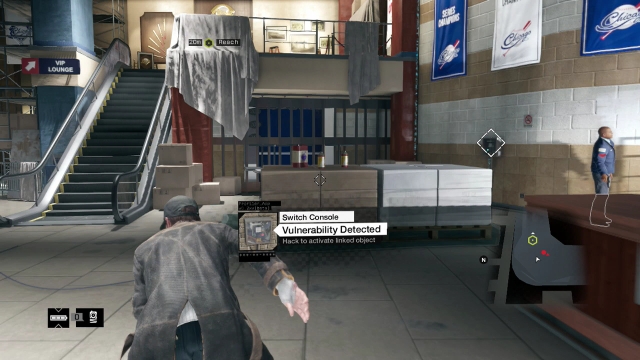 Once you have the parts, press the button indicated and open the Weapon Wheel, then press the button to create a lure. Next, you need to throw it where the screen indicates, to distract the guard. When you do so, you will then need to hack the lure, which is affixed to the wall.

Now you have a moment to yourself while the guard investigates the lure. You can run past him (give him a wide berth) and up the stairs, to the point indicated on-screen. 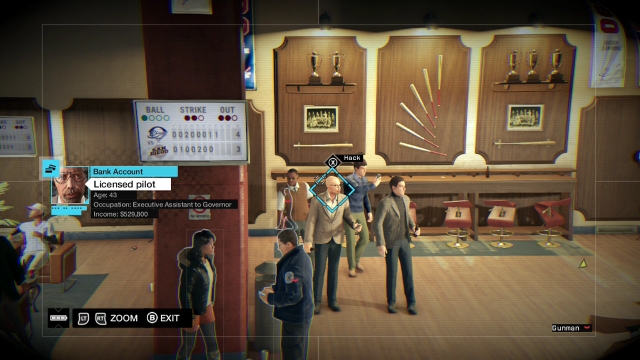 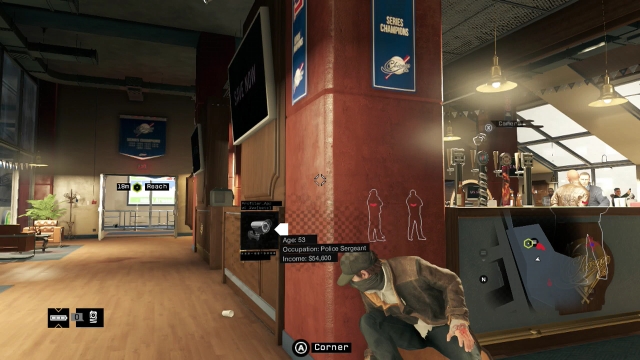 A scene follows, and you are watching as the police harass a group of citizens. You need to find someone in the group to hack. Look on the wall overhead and there's a camera, so hack your way to that to get a better view on the group. Then look for the guys in the nice coats. There is one just below you, and another two out near the center of the room.

When you're done, return to Aiden and crawl around the bar. It conveniently leads you around the outside of the room, and to an opening with double doors. You can head out through that opening to reach a hallway. Ahead, there's an ATM you can hack. Then you'll reach the point in the hallway that completes the objective.

Find and hack the guard with the access code.


You're looking for a way out of the stadium, with a distraction. To facilitate that, you need a security card. There are a few guards just ahead of you, and above them a camera that you can see from your current position. Hack the camera. 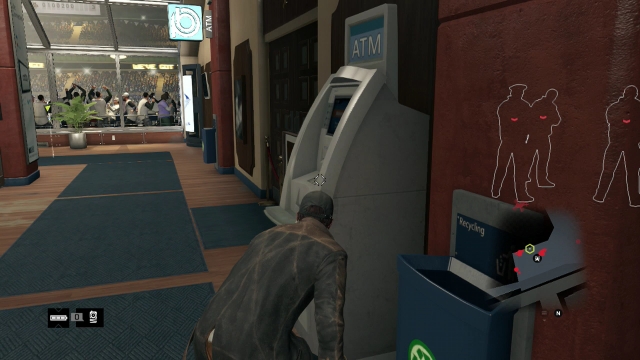 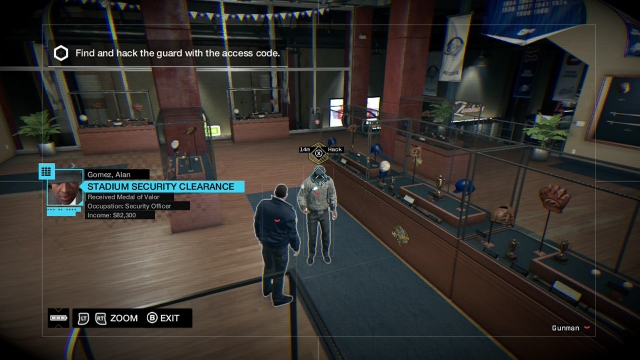 Once you are viewing the next corridor by way of the camera, look at the guards. You can't get anything from them, but to their upper right there is another camera. Hack that one. You'll next see two guys standing near some display cases. The guy on the right has the desired security clearance. Hack him.

Hack into the stadium's network.


With clearance acquired, you next need to hack into the network, which of course requires finding it. Look to the left and you'll find the Building Security Router, on a wall near a banner. Hack it and that takes you to a security chamber. Ahead of you, there are a couple of machines with the security system positioned overhead. Hack it.


Next, it's time to create a blackout so that you can make your escape without attracting too much attention (aside from your exploits that allow you to get to this point, that is).

Open the Weapon Wheel and select the Blackout ability, then use it as directed.


Your final step is to escape the stadium. You are able to move more freely now, because the police can't see clearly in the darkness. You can creep down the corridor near the police officers, but beware the areas that are well-lit. You should only run through those when the officers are turned away and looking into darkness.

If you get within hearing range of an officer, a red triangle will appear near his head, letting you know that you are at risk. Stick to the walls and you shouldn't have to worry, especially if you stop moving until a guard walks the other way. 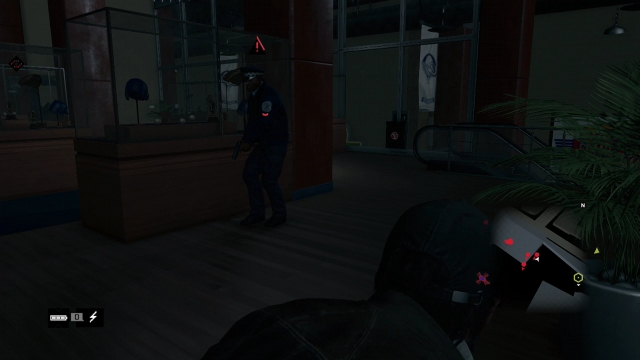 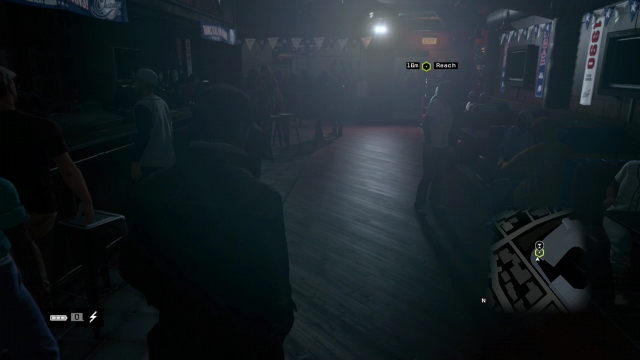 Past the officers, you can reach the top of some stairs and descend those to a lower level. Then it's basically just a straight shot to the doors you are supposed to reach. When you do, a brief scene follows to alert you to the presence of a car nearby.

When you regain control, head through the doors and arrive in a dark cafe. Patrons are complaining, but there are no cops. You can walk nonchalantly forward to the doors and exit onto the street. If you want, you can stop on the way to buy a beer.

Then hit the streets.


As you head outside, you'll find yourself in the middle of a police search area. You need to get to the car that your friend made available for you, preferably in one piece.

Start forward and descend some stairs ahead of you. They wind their way toward the sidewalks. There are cars patrolling, available as flashing diamonds on your on-screen radar. You should also see an indicator letting you know where to find the garage. Head directly across the street and down an alleyway, then pass left through an open bay door. 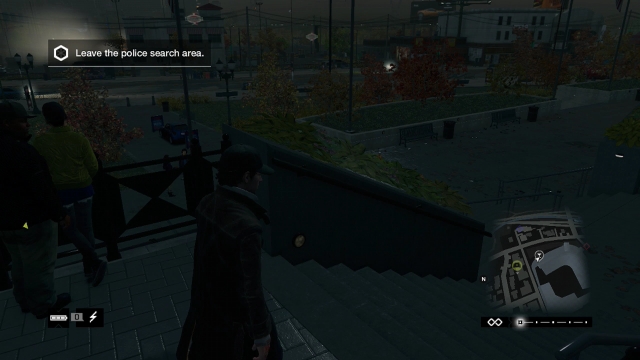 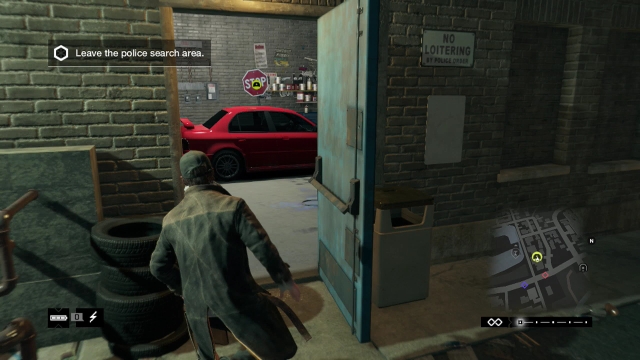 Find and enter the car and a garage door automatically slides up ahead of you. Directions appear to let you know how to control the car, also. It's fairly standard. Mostly, just worry about using the trigger buttons to brake and accelerate.

You will automatically loot the glove box for some Meds. Then you should pull out of the garage and start looking for a way out of the area. The police are still easy to track, and you can pull into side streets and hide in your car if you need, provided you do that ahead of the officers. It's also possible to hack the traffic signals as you roll toward them. If you hack one just as you're passing through, it can create obstructions and make it less likely that the officers will be able to follow. 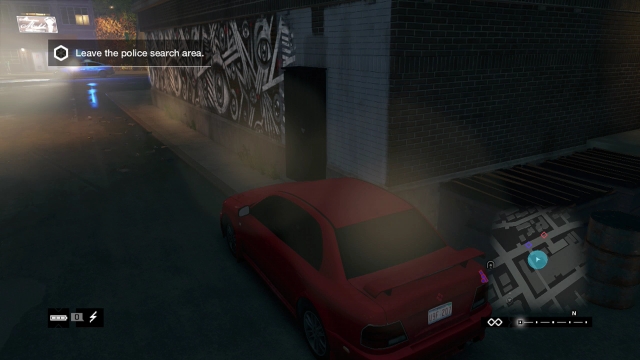 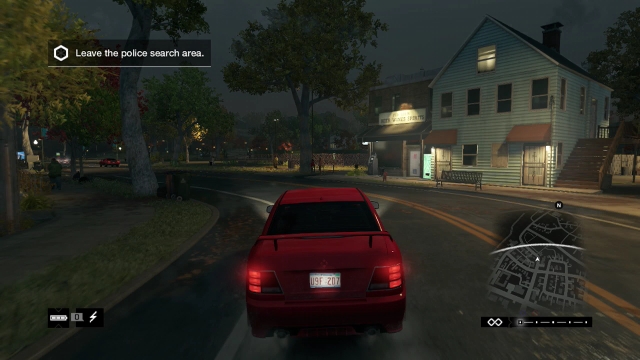 The area you need to escape is indicated by a light gray line that circles your general area. You can keep to the main streets and move in a direction opposite the patrolling cars to easily leave them behind.


After you ditch the cops, your next objective is to reach your hideout. You can see it indicated on the map, so you just need to follow the obvious roads to that destination. You can follow the on-screen prompts to open your map and either set a GPS marker. Typically, you can even select the option to Fast Travel to any hideout, but not during a mission.

On the map, when you pull it up as prompted, your hideout is located to the south. Find the icon and set the waypoint. Then just follow the blue indicator lines along the streets to head to the motel that serves as your hideout.

When you reach the motel, park and exit the car. Head to the stairs, then climb them to the overhead balcony. Follow it around to reach your door. 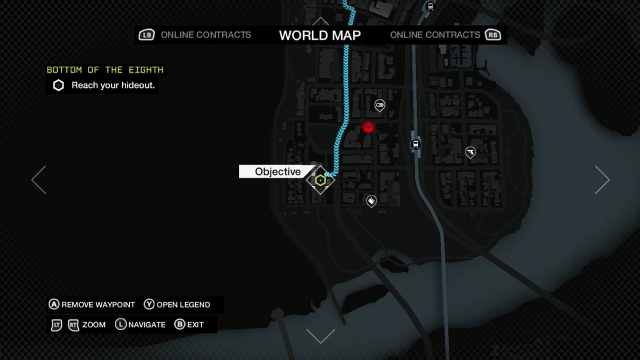 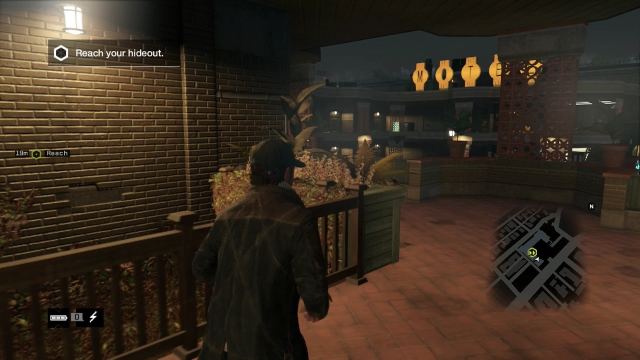 A cutscene follows. When it concludes, press the button indicated to access the Skills Tree. You have a point, but your options are limited. You are only permitted to spend it on Gates & Garages, which gains you the ability to open or close gates and garage doors. Assign the point. Now you have additional skill points that you can assign more freely. The initial options available aren't your only ones. You can move left and right from the Hacking tree to acces the Driving, Combat and Crafting trees.

When you finish assigning points, the mission concludes. You can change the time of day, fill your Focus meter, reset the Heat level, and save your progress. The option isn't available during missions, so make sure that you take advantage of it now to do all of the above and to trigger a cutscene as the mission properly concludes.

NEXT: Act I: Big Brother