There are several mini-games you can play throughout the Chicago area, and they come with a variety of rewards, including an achievement/trophy and the ability to unlock certain nodes on the Skill Tree.


Your reward for beating 3 levels of the shell game is an XP bonus. 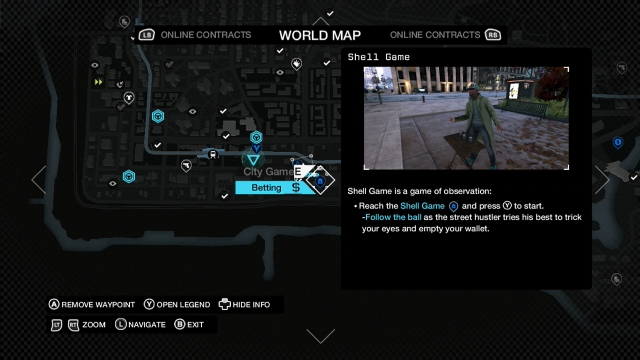 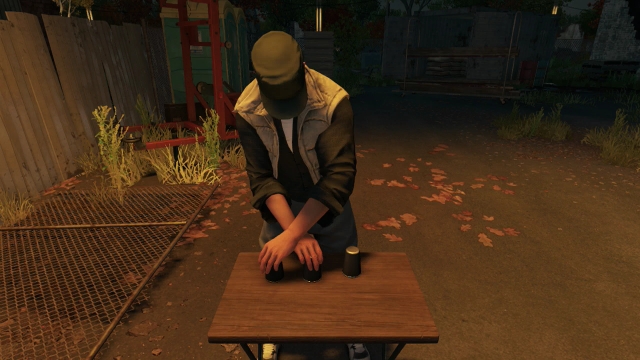 This is a simple game at a glance, but the guy you're playing against will cheat so you have to watch for that. Start by paying attention to where the ball is located as it is covered by a cup. As the hustler moves the cups around, watch out for large cup tips, which signify that the ball is switching cups. If you don't see a switch, keep track of the main cup. If you see a quick switch, track the new cup to its destination.

When you win, which may take a few (not especially expensive) efforts because you have to start a level over again if you guess wrong, you can play on a higher level. Keep playing until you win all three levels for your XP reward.


You can summon the Sayonara LE motorcycle from the Cars on Demand app, once you clear out a poker table in this mini-game. 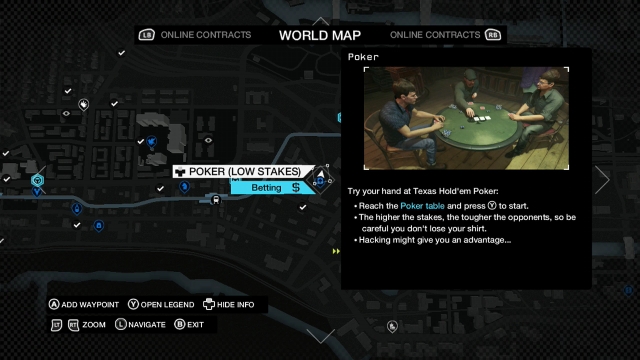 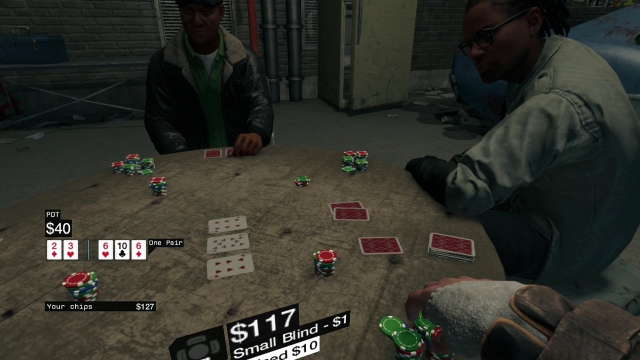 You've probably played poker at some point in the past, so there's not much I have to say here to help your strategy. Odds are good you're better at the game than I am, having barely played it myself. All you need to know is that you needn't worry even if you are terrible at poker because your opponents aren't especially great, either.

You should be able to stick to a game and make them all bust, if you're smart about making small raises and convincing them you have a good hand. Just don't allow yourself to lose your chips too quickly. Small losses and bluffs are fine. Don't bet anything that will set you back too far unless you genuinely have an okay hand. Keep in mind also that each player at the table is in it to win it, so you can let them break one another. Your goal early on is survival until you can win some big hands.


If you reach wave 5, you'll be able to purchase the Auto Weapons Expert ability from the Skill Tree, once you have enough skill points. 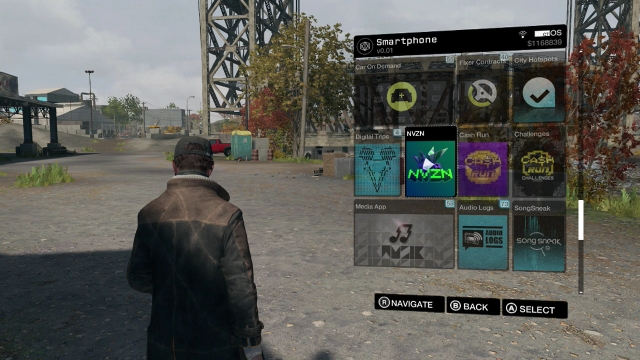 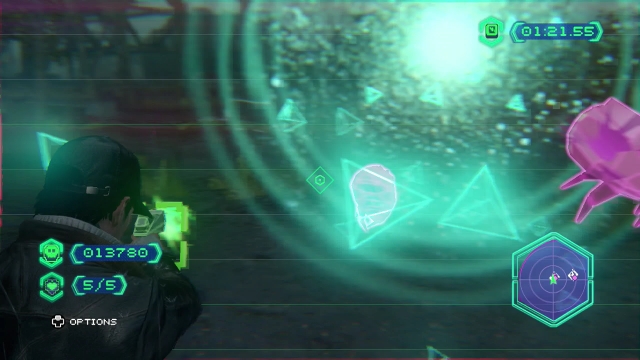 The goal here is to run around the area where you trigger the game from your smartphone, blasting aliens that appear out of a vortex... or two, or three. The enemies start out quite simple, and they'll stay that way if you blast them before they evolve. Sometimes, they drop weapons that grant a temporary boost in firepower.

You need to prevent any hatclings from surviving long enough to fly up and leave the atmosphere, which is easy enough for the first few levels and that's all that matters if you want your prize. You can keep going from there if you're after a high score, naturally.


If you reach the 5th level against an opponent while playing the drinking game, you'll be able to use the Piledriver weapon from the weapon wheel. Finish level 10 against all three of them for an achievement/trophy. 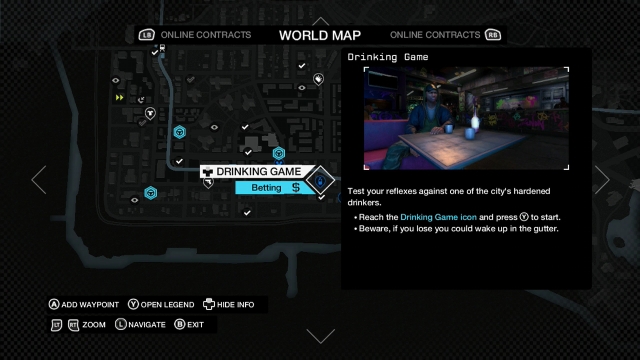 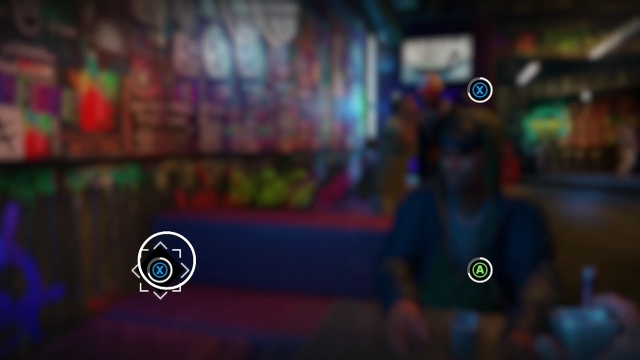 You can't reach the 5th level all in one go. Your opponent will start at a certain level, and you can drink him under the table one level/bet at a time. If you've played through the campaign, you know how the drinking game works: you move the analog stick to highlight icons, which correspond to a face button on the controller. You have to press the button, which gives you a little more time to reach the next icon and press that button. As you advance, the buttons may be spread out further and you might not be able to see what button you'll need to press until you hover over a button, or you may not be able to see the location of more than one button at a time.

After beating an opponent, you can return later for a rematch. In this manner, you can level up the drinking game to its maximum with each opponent, earning yourself the achievement/trophy. In the much shorter term, you'll at least gain a gun.


When you complete 10 chess puzzles, it's possible to unlock the Maximized Focus skill from the Skill Tree (assuming you have the requisite skill points). 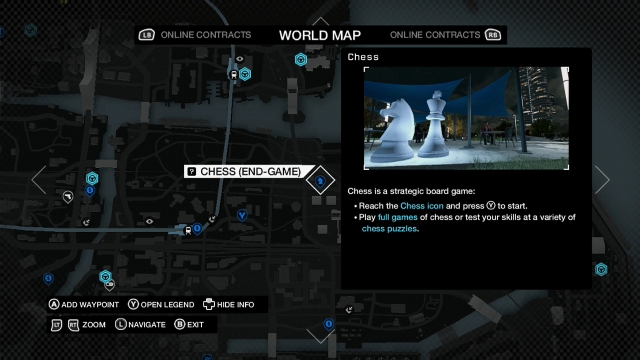 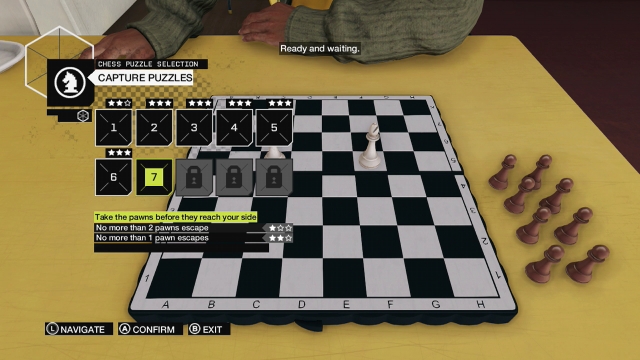 There are numerous varieties of chess game in this mode, and you'll have to find them on the map and travel to those locations. Challenges include puzzles that place certain restrictions on what you can do, and full games. Chess is... chess. You know how to play it or you don't. Assuming you do, just find each location and win the match.

Helpfully, you don't have to earn a 3-star performance. You can also win 10 puzzles in a single event, such as the Chess (End-Game) event to the northwest of the southeastern hideout in the Brandon Docks region. Any other chess matches you might attempt after that are just for fun.


The P-9mm can be selected from the weapon wheel, once you earn a gold star in a cash run event. 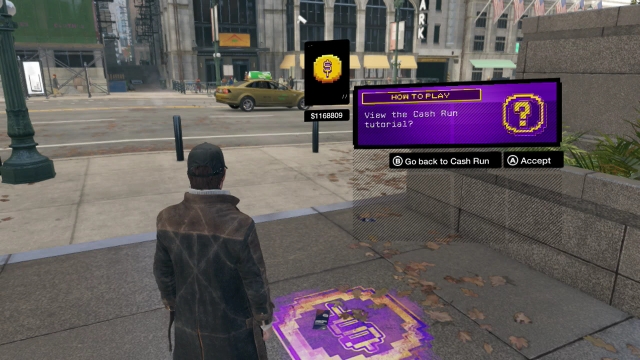 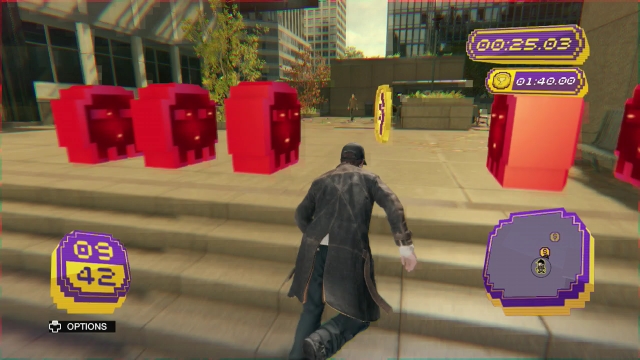 Find a cash run event on the map. It will be a point on the sidewalk that looks like it was produced by a bunch of flourescent sidewalk chalk. If you try to begin one with your Profiler open, you'll be told the event is not available. Simply press the button to disable the Profiler and it will magically let you participate.

You need to run along a predetermined route, collecting the golden coins and the purple icons that extend your time while avoiding the red icons that hurt your score. The clock will tick down and you need to beat a certain time for a gold medal. It helps if you run toward a wall and press the button to vault over it as you get near, not when you're right on top of it. Always watch for the purple icons slightly off the beaten path, as they're key to a first-rate finish. If you have to restart an event, you don't have to backtrack. Just choose the option when you finish and try again.