You have made it to the final mission in the game. It begins at the Bunker, so head there when you're ready (you can fast travel) and press the button on the door to accept.


Make your way into the bunker and go down to where the computers are waiting. A scene follows. 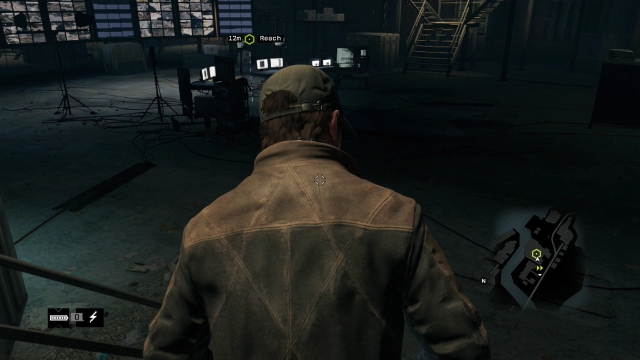 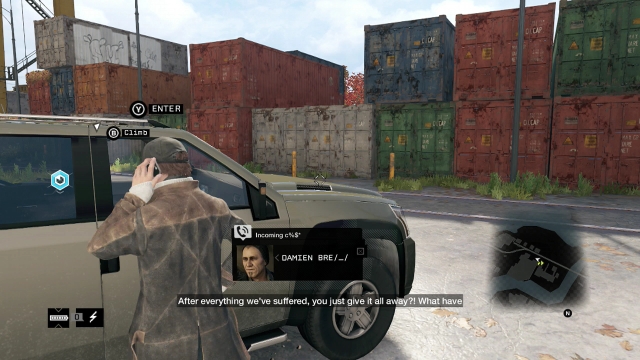 When the scene concludes, you'll be outside the bunker and you will get a call from Damien, along with a new objective.


Set a waypoint at Damien's location on the map, and start driving toward it from the Bunker. You'll want to steer clear of steam vents, and don't trust traffic signals. Along the way, you'll get a call from T-Bone, along with a revised objective.


There's a new destination marked on your map, so update your waypoint and head there next, still avoiding traffic hazards sent your direction by your nemesis. 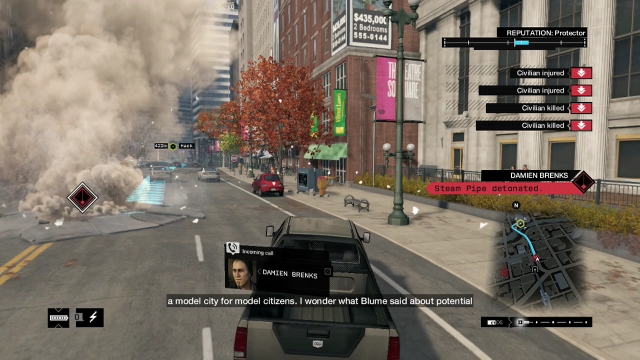 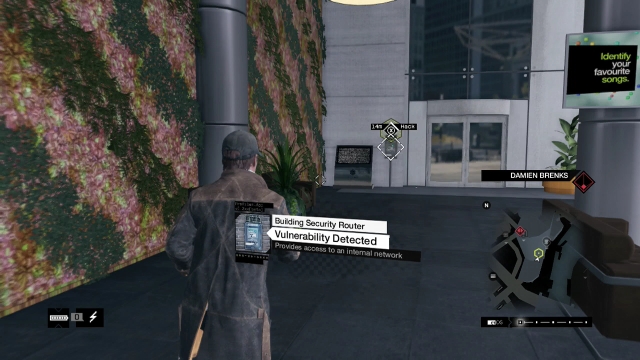 For the most part, the route is fairly safe. The steam vents are the most dangerous thing you'll encounter, and you can minimize the harm they might do by simply keeping to the right side of the road, rather than the middle lanes. You may have to floor the accelerator and race a bridge, as well.

When you pull up alongside the building, hop out of your vehicle and run through the front doors. In the lobby, take a right as you keep the main wall to your left. Follow it around to find a console you can hack to initiate the hacking mini-game. However, you're not going to be able to get through without a call to T-Bone, which you will make automatically as soon as that point becomes evident.


You need to install viruses at three separate locations to complete this objective, which will serve as the main thrust of your mission. Those locations are indicated on the map, to the west, east, and due south from your current location. You can visit them in any order. If you mess up along the way but you have taken care of a given tower, that progress will be saved, so you can take down one at a time and still advance. 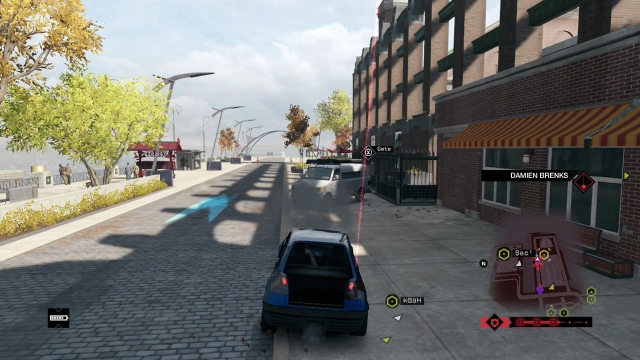 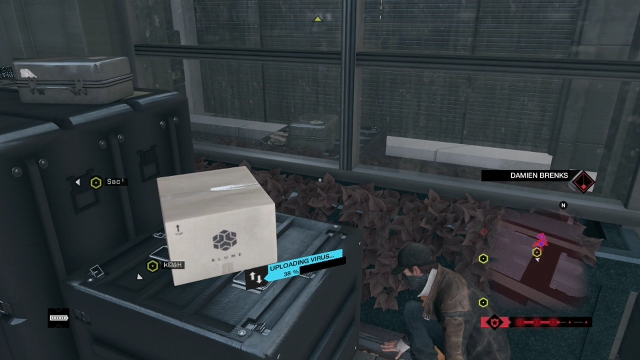 Choose a tower and mark it as a waypoint. I start with the east tower, along the dock not far from your current location. Drive there through traffic and around Damien's tricks. As you go, a bunch of yellow indicators will flash on-screen, but your waypoint marker will guide you to the true destination. Your progress will draw the attention of police patrols, which are difficult to avoid due to their substantial numbers and persistence. They'll make life rougher than seems fair as you progress toward your destination.

When you arrive, you can hack the gate and drive through it, then around to the back yard where the panel you need to scan is located. Scan it from your car, or get out of the vehicle and hide behind some nearby shelter (the better to avoid bullets fired by a sniper in the circling chopper). You have to stay in the near area while the virus uploads. When you have waited long enough, the upload will complete and you have two destinations left. 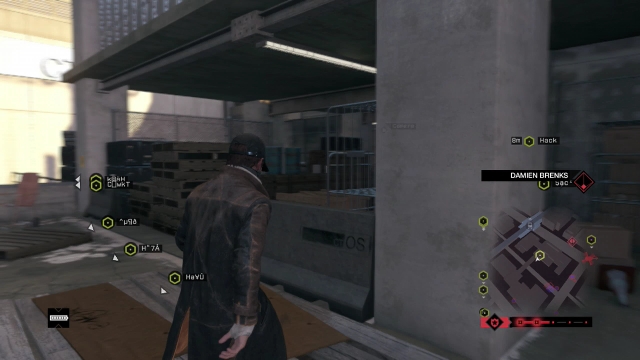 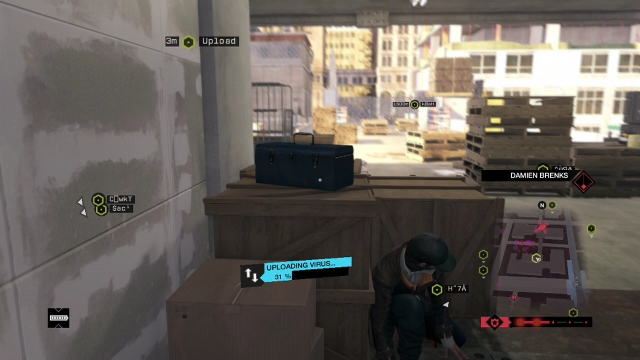 The next tower I recommend heading toward is the one to the west of the central location. Drive there next. The process isn't really any different from before, though you'll definitely want to gun the accelerator to make it across the bridge before it is raised (difficult if by that point your car is barely mobile, as happened for me). Even with police officers chasing, you can hack the terminal and hide behind a wall nearby. The cops may know where you are, but they could take time to spread out and flank you, by which point your upload could already be a success.

Then you have only one more terminal left. It's the one to the south of the vulnerable ctOS building. Head there and upload the final virus fragment. You'll have to head through the yard and climb along equipment and stacks of building supplies to high ground and find the panel located on the side of a building, but there are plenty of crates nearby that you can hide behind.

Lose any pursuers before hacking into ctOS.


With the virus fragments uploaded, now you need to ditch the police so that you can make your way back to the original building and finish hacking. Fortunately, Damien can no longer interfere because he has been locked out of the system. That will make your efforts go more smoothly. Just use a few Blackout items and drive away quickly and the deed is done.


Return to the point marked on your map and hack into the terminal. This time, you can clear the hacking mini-game with relative ease. You will appear in the server room. Here, there are no video logs to worry about. Travel to the next camera, which shows a security router you can intrude. Do so. There's one more mini-game to clear, but it's no challenge at all. If only they were all so easy!

Use a boat to reach Damien.


You have Damien's location now. Set a waypoint on the map, then head there next. 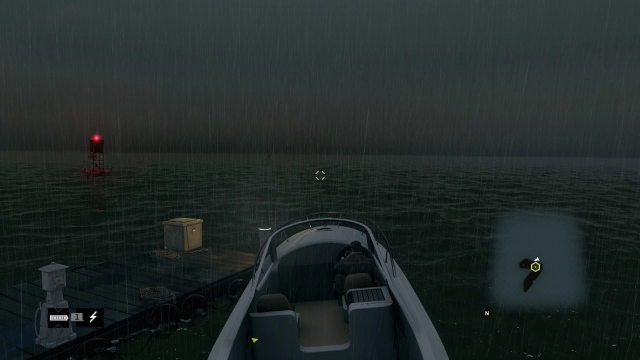 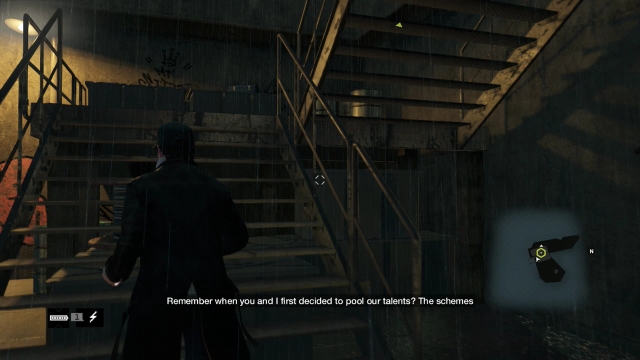 The blue waypoint line will lead you to a familiar marina, where you can commandeer a boat. Ride it out to the island.

Dock your boat and head along the dock, up the stairs to find a lift. Hop into the lift and ride it to the higher ledge, then walk toward the right. You'll reach a door. Pass through it to trigger another objective.


You're near to Damien now, so find him. Climb the spiral staircase that ascends along the outside of the room. At the top, you'll find a ladder. Climb it and pass through a doorway onto the outer area. Head right again and there's another ladder. Climb that one also. 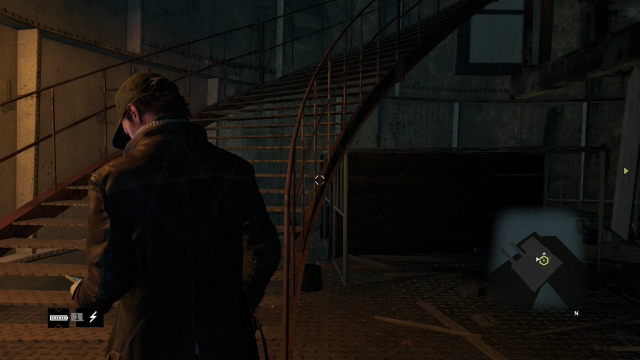 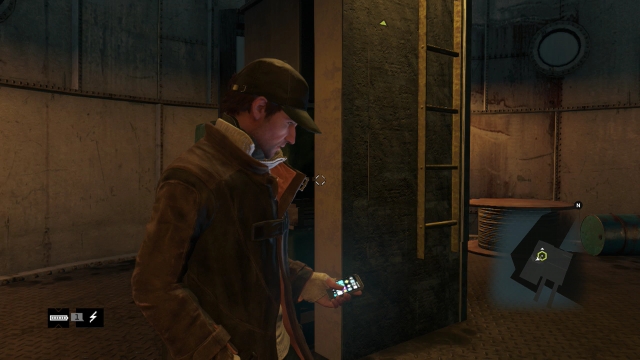 As you start up the ladder, you'll trigger a cutscene.As it concludes, you'll have to press the button to hack one final time, to take out a new distraction. Then you'll need to shoot as you get a gun in your hand and it points toward Damien.

Walk away or shoot Maurice.


The credits will roll as news clips play, but then there's an interruption for one final objective. You can either walk away or shoot Maurice, who is situated on a crate ahead of you. It's your call. Then the campaign will really end as the last of the credits roll.