After the previous mission concludes, you'll get some phone calls and then your new destination will appear on the map, near the very south corner in the Brandon Docks area. Travel there when you're ready.

Hack the network to find Nicky.


Ahead of you, there are employees standing near the entrance to an old building. You can take cover as T-Bone calls you to warn that fixers were hired to keep the area safe. 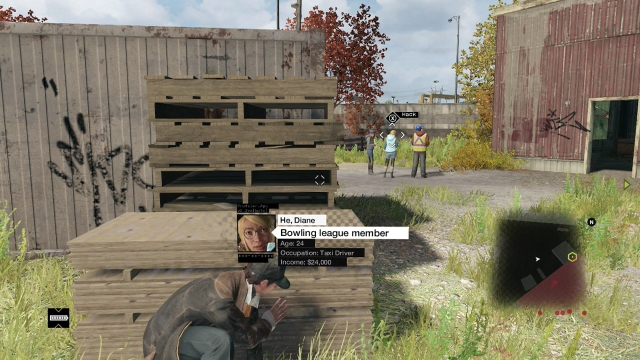 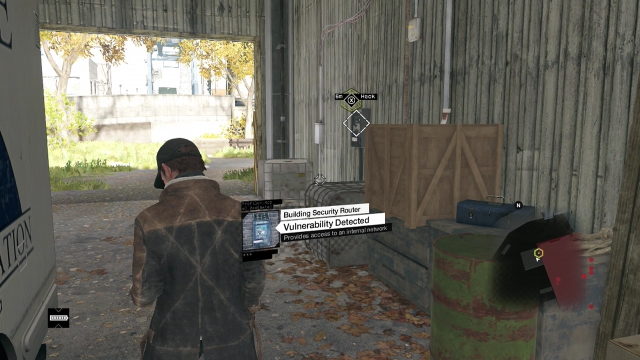 Your plan is to let hacking do the heavy lifting for you. Head forward toward the building, keeping to the right. You'll find an open garage with a vehicle. To the right, there's a building security router, which you should hack.


Hacking that router will get you a look at your sister. She is guarded, though. You need to fix that. 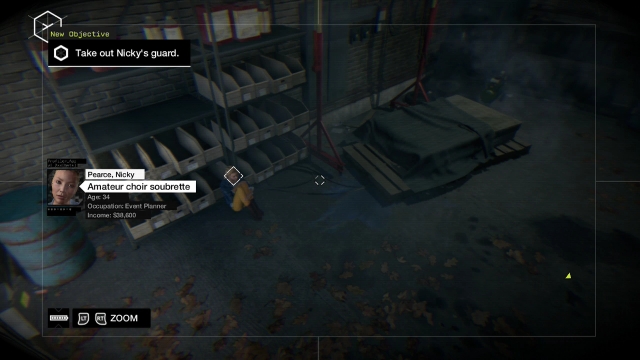 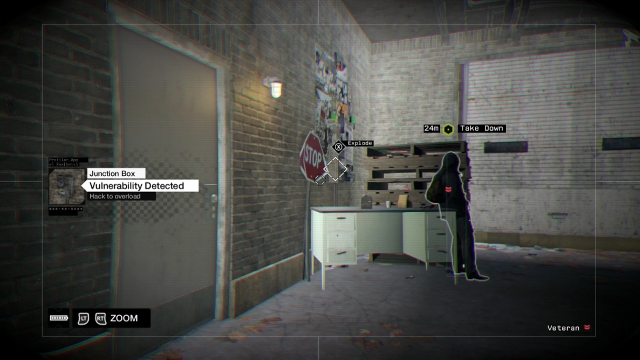 Look to the right and you'll see the guard. Past him, there's a camera. Travel to the camera, then look back toward the guide. Behind him, there's a junction box on the wall. Hack it to make it explode, taking out the guard in the process.


You should probably let Nicky know what just happened. Hack the phone on the guard's corpse and a scene follows before you gain a new objective.

Guide Nicky to a car.


You have to guide your sister to a vehicle so she can leave the premises. 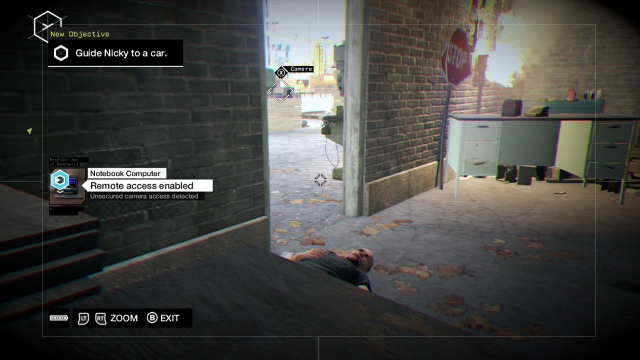 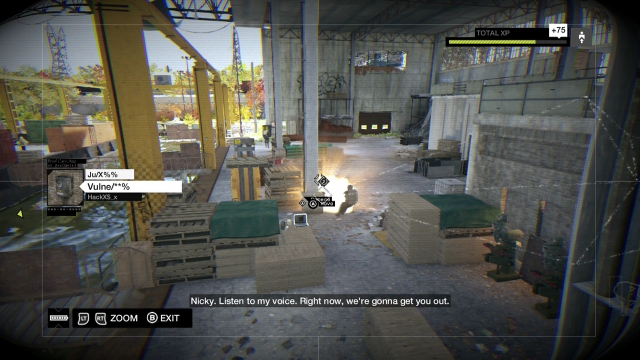 There will be guards just outside the door. Look through the opening and you'll see a camera. Hack over to it. Then look up the sheet metal wall ahead of you to find a higher camera with a better viewing angle. From that camera, you can see down to the Enforcer that is nearby. Past him, there's a forklift. Hack the forklift to draw his attention forward, then quickly hack the panel just to the right to overload it, triggering an explosion that will take out the guard.

Now point to the pile of lumber just outside the door and to the right. Nicky can crouch behind that, and then you can have her run across the gap to the next pile of boards. There is a guard beyond that space, though, so make it a quick dash. 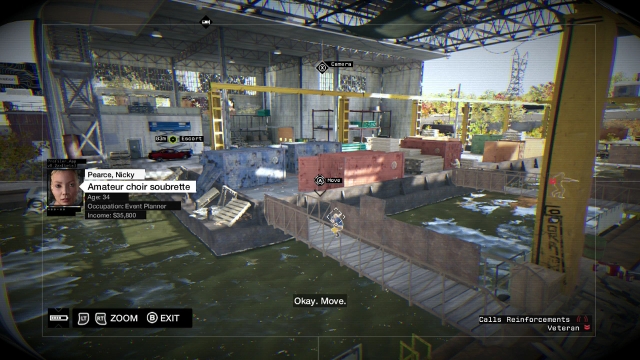 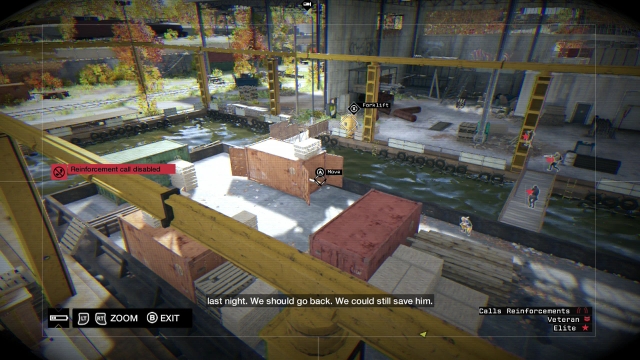 More guards will be coming from ahead and crossing a bridge in that direction, but not the closer one Nicky needs to travel across. Some of them may have explosives, which you can hack to keep them busy while closer at hand, you direct Nicky across the bridge.

When she reaches the far side, have her head around the container and she should be near a wall. Hopefully, the guards are headed across the bridge and still busy to the right. They won't stay there for long, though, so Nicky should rush along the wall and through a container further to the left. You can switch cameras to continue guiding her along that route, because otherwise you won't be close enough to direct her. 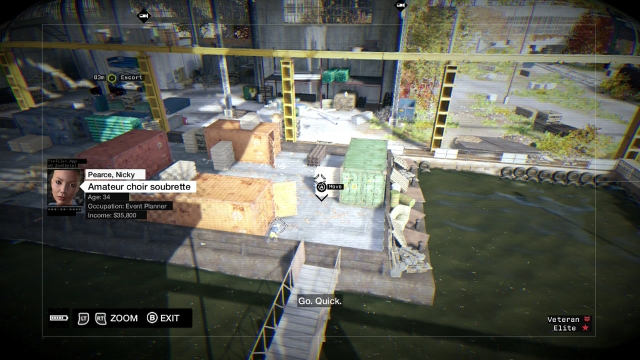 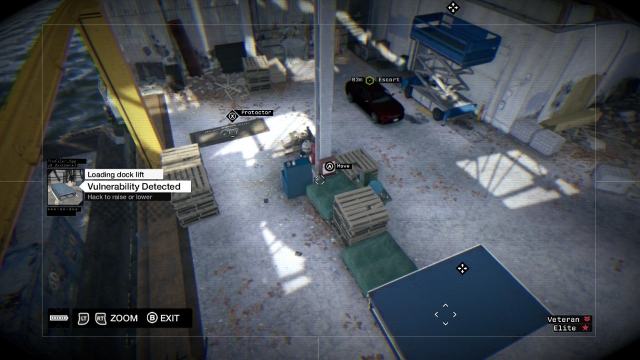 The car is off to the left. She'll have to cross a bridge. If she's far enough ahead of the guards, that's not going to be a problem. There is plenty of cover, and they shouldn't be anywhere close, so you can just have her sprint from point to point, making sure to switch camera positions if you must. You'll get near the car. Just point to the car and have her run to it to complete that portion of the mission.


Now you need to get out of the facility yourself. Return control to Aiden and hop into the vehicle near where you hacked the panel. Drive it out of the facility, across the grass through the obstructions, and the mission will end once you get outside of the radius marked in gray on the map without raising the alarm. If pursuit does happen, just ditch it in the usual manner.

NEXT: Act IV: Ghosts of the Past