Travel to the campaign point in The Loop and accept.


You start the mission across the street from the old Ambrose Theater building. Although you figure Defalt is aware that you're coming, you want to get in the front door quietly. 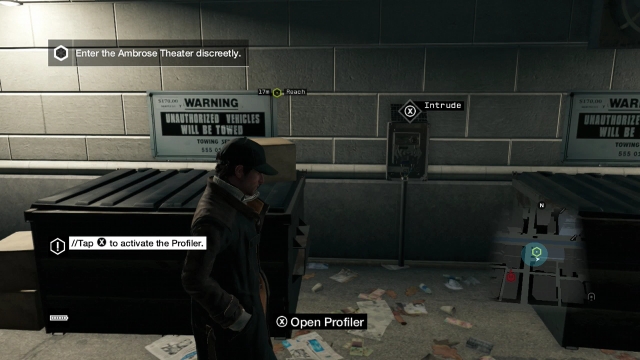 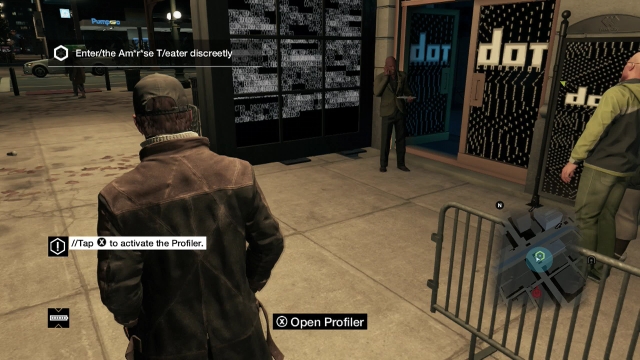 Start across the street and pull up the Profiler. You'll see people lined up at the box office to the left, while to the right there is an alleyway. You can hack a panel there to jump to an interior viewpoint. Then you can unlock a switch console to make a door swing open. Return to Aiden and head back around the front of the building. To the left of where the people are lined up, you can head through an opening and into a lobby.

Profile guests to get to Defalt.


As expected, Defalt knows you are here. He welcomes you to his party. However, you don't know where he is located. Start through the doorway ahead, with the Profiler active. 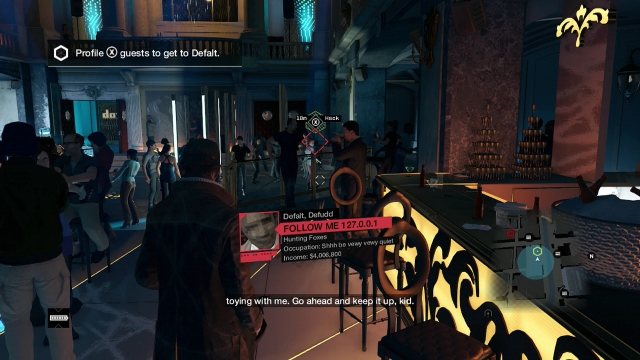 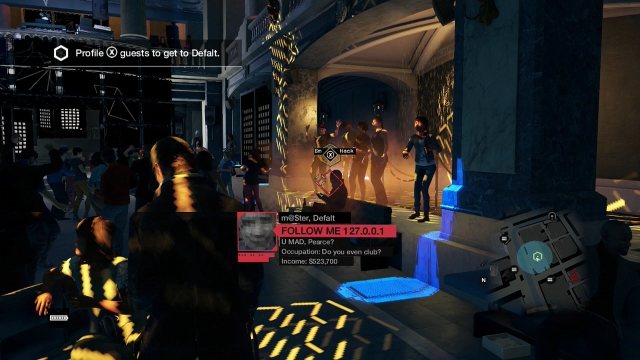 You'll find a lot of dancing people. Look in the corners of the room, though. In one, someone is sprawled out on some steps. You'll activate a yellow point on your map when you pass over him, so get close and scan.

From there, you need to head along the opposite side of the room, to find another point to hack. Someone is sitting on a bench with a phone out. When you hack that, you have yet another target. Near the end of the room, there is a black wall of monitors. Your next target is hiding behind those monitors, in an alcove. Go there next and hack the target to activate a new objective.


You need to get up onto an overhead balcony now. 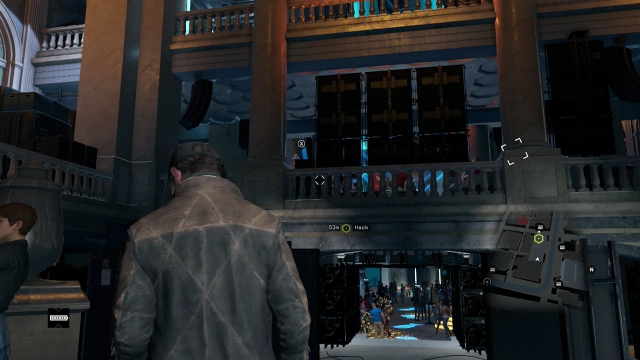 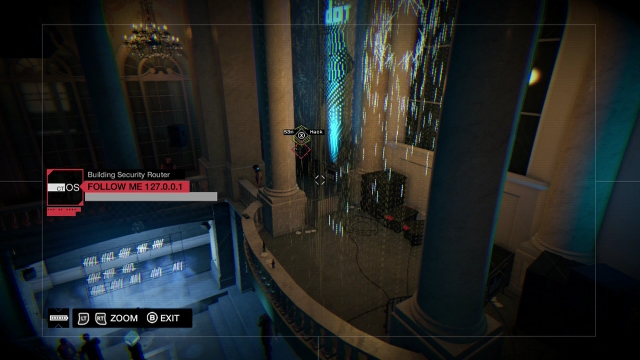 Climb to the first landing on the stairs, just beyond where you scanned the third person. From there, you can look back and see a camera on the overhead balcony. Hack into it, then to the camera across the lobby. You can continue along the length of the room, and find a point to hack on the far balcony railing.

If you're viewing things from the right camera, you'll also see a hack point along the wall just behind a stone column. It is the building security router. Hack into it and you'll have a view of the server room. Ahead, there's a computer you can intrude. 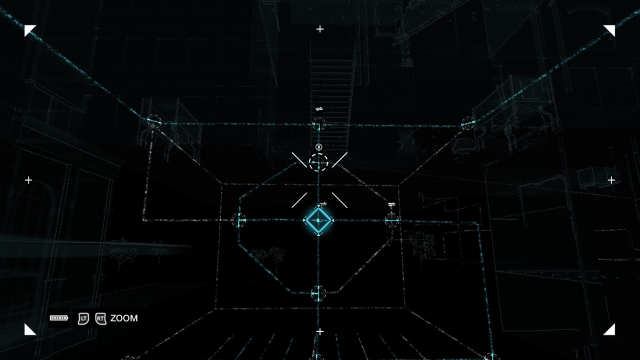 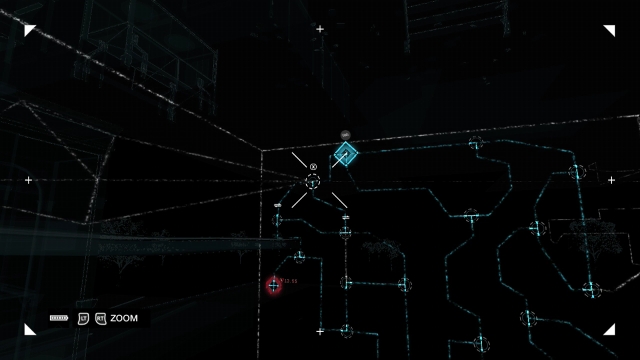 To get through these games, you'll first have to think in three dimensions. The first screenshot above shows where the pieces will be oriented as you solve that first puzzle, but first you'll have to unlock the locked ones an elbow at a time.

For the second puzzle, you're going to have to hurry against a bunch of currents. Start at the bottom and work your way up, one lock at a time. There are quite a few of the locks, and you'll have to work with a time limit once you get about halfway done with the puzzle. However, you should have the skills by now to hack this, if you're paying attention. The right of the two above screenshots lets you see how things will look as you've nearly solved the puzzle.

When you finish with those puzzles, you'll have a view of the upper balcony and you can scan a camera. The intrusion will be detected.


You have to pursue your target now, which will be difficult because he kills the lights in the area. 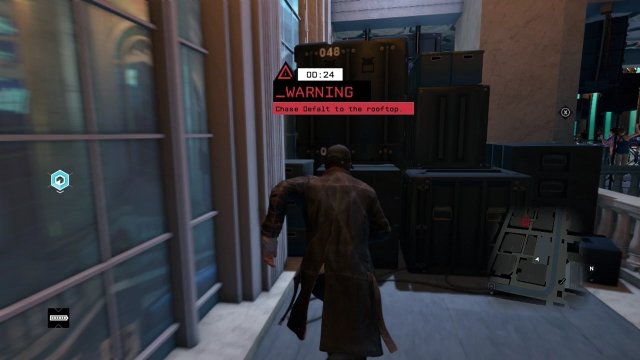 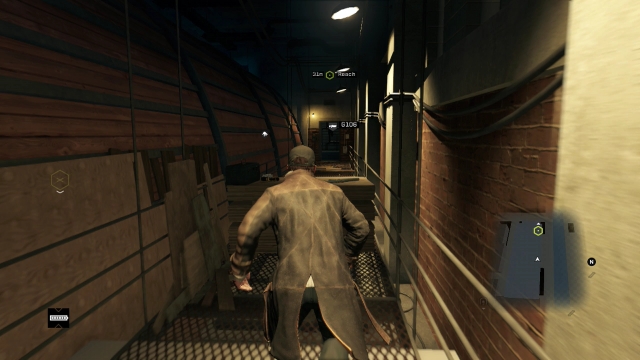 Your perspective shifts back to Aiden. Now you have to run forward through the crowd, to the stairs. Previously, you couldn't head up the right side of those stairs, but now you can. Run along the balcony and climb up some boxes, then from there up to the higher level. Now run down a new hallway, and to a ladder at the end. Climb that ladder.

From the top of the ladder, start down a hallway with a grated floor. You've made it far enough now that you shouldn't have to worry about failing to catch your quarry. Grab the loot that is spread out over a crate, then continue advancing down that corridor. You'll see red indicators that suggest enemies are waiting for you ahead. There's a Blackout sitting on a crate near a door leading left. Grab it, then head through the door to reach your destination and trigger a new objective.

Fight your way across the rooftop.


Defalt has men with him, ready to defend him, so you'll have to cut a path through them to reach the hacker. Fortunately, there's plenty of cover. Make sure that you get behind it immediately, though, as a sniper is in the area. 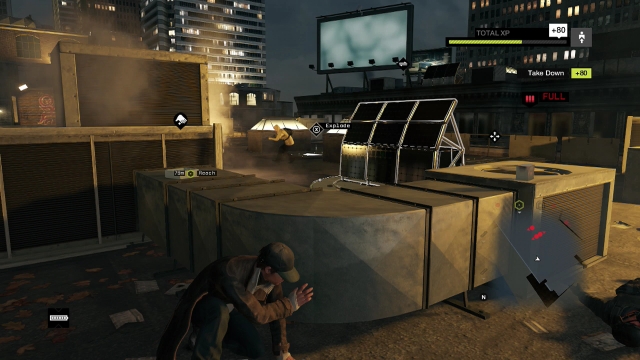 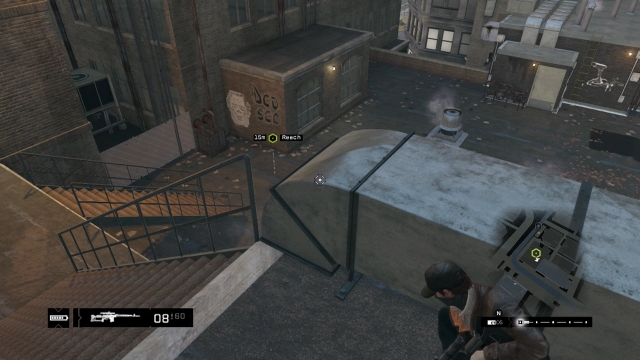 There are a number of guards in this area, including the snipers on the distant roofs. Take care of any closer threat first, since those men can throw grenades. You can use takedown moves to get rid of them fairly easily. Then pull out a sniper rifle and scan the outer area. You shouldn't have trouble finding the snipers and may even be able to hit them from so far away that they don't have a real chance to hit you.

Once you have cleared the area of indicators, head toward the back of the area. You'll find some stairs you can descend toward the point marked on the mini-map. As you get close, a new objective arrives.

Chase Defalt and keep him in range.


Defalt has decided to make a run for a car. You can chase after him now, but he'll make it to the street level and jump in a car. Make sure you're not far behind him. Get to a vehicle, jump in and start driving after the mark on the map. Once you catch up enough, you'll gain another new objective.


You have to chase Defalt through the area, and you need to come within a certain range so that you can remotely download the data he is carrying. As you do, T-Bone will comment on what he is finding. 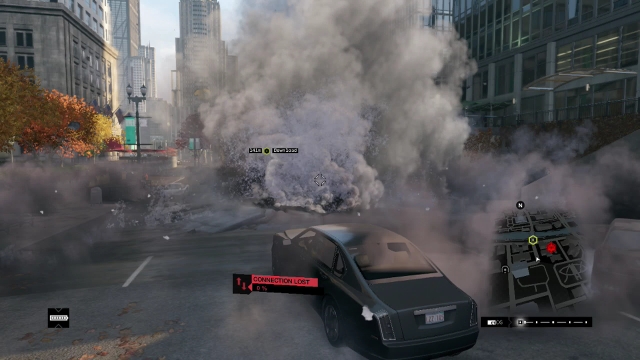 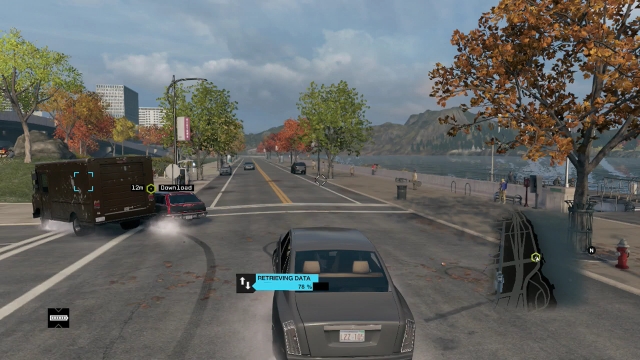 Defalt will try to lose you by raising bridges and using steam vents and anything else you might do, but he sometimes slows down and tries to turn around sharply to lose you. That tends to slow him down and give you a chance to catch larger bits of data. If you lose contact with him, it's not the end of the world because you can pick it up again (as long as you don't get too far out of range) and resume.


Once you've downloaded the data, you have to take out your target. Use your hacking abilities to disable his car if you need to, then eliminate him when he jumps out to flee. Once you do, a scene follows and the mission concludes.