This mission will take place in the familiar apartment buildig you've visited a few times previously, but for the first time, you're not trying to sneak around it. This is a proper invasion. When you're ready, head to the point on themap and get started. If you can, it's a good idea to unlock the Enforcer Combat Take Down ability, in the Combat section on your Skill Tree, as you'll be fighting such a foe by the end of things. Make sure to bring along plenty of frag grenades, as well.


You'll have to cross the street to enter the Rossi-Freemont complex, which is on high alert and very heavily guarded. 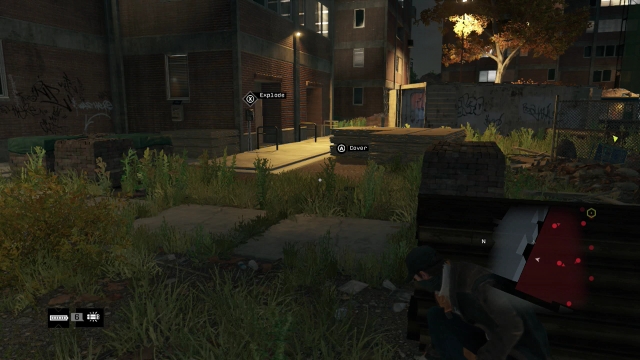 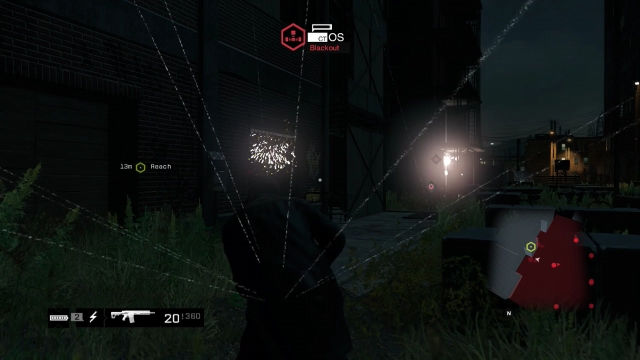 Getting to the door shouldn't be a problem, because you've been here before. The same points of cover that make it relatively easy to cross the yard are still here. There are snipers on the higher ledges around the area, but their lasers trace predictable patterns that make them obvious.

Work across the area to the door, and you should be able to get there without being seen. As you draw close, you'll talk to your friends back in the base. They suggest using a Blackout item, which you should have on your person. Access it from the Weapon Wheel and put it to use.

When you use the Blackout, the area will briefly be dark. You can sprint to the door and pass through it to enter the building.


Now that you're inside, you'll need to head for the server room, which previously you saw when you had Bedbug work his way through the building to that area on your behalf in a previous mission. Now you're making the trip yourself. 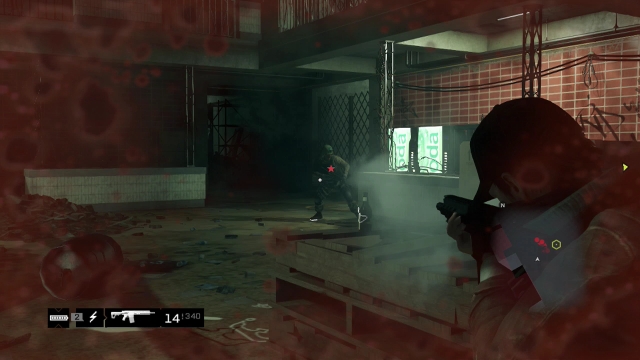 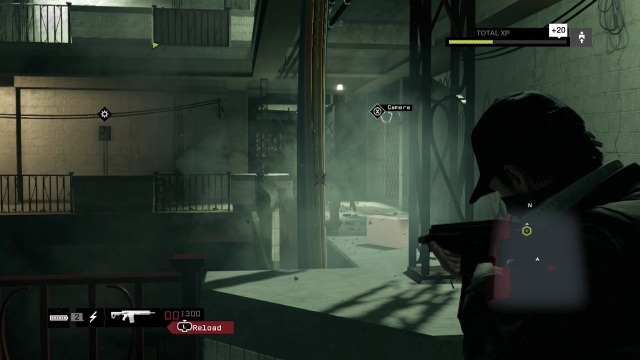 The lobby area is already guarded, but there are points of shelter to the left and right, just ahead of you. Make sure that you get into place quickly. There are guards on the upper balcony that will see you, so you're going to be gunning down several men from the point of cover you choose. Then you can head to the elevator when the local threat is gone.

Once you're inside the elevator, turn around and hack the panel to ride the elevator to a higher floor. The doors will open and you can quickly hide in the corner. There are guards up here, to your right. You can wait where you are for one of them, who may run by and to your left. Gun him down as he does so. Then dash out and to the left to get behind a low barrier. Look right, past the elevator you just left, and there's another gunman. Take him out quickly. 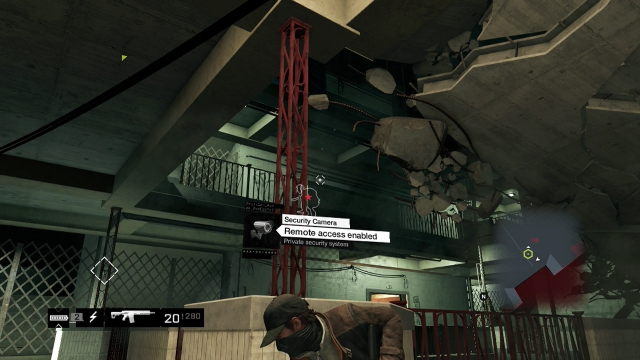 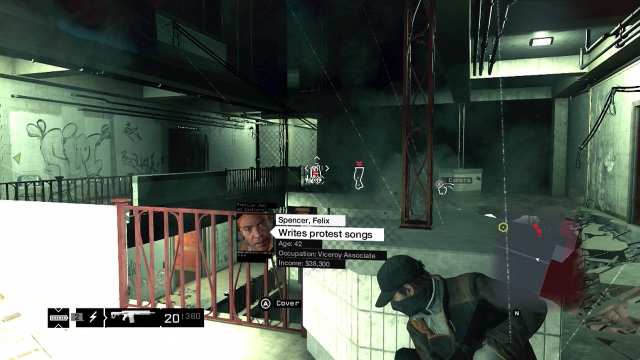 Now head in the direction where you just took out that second gunman. Head around the railing, making sure to watch the balcony overhead. There's a gunman up there, too, and he'll try to take you out if you get careless (or even if you don't, but in the latter case he'll be less successful). Eliminate him, then check the wall and you'll find a switch console. Scan it to unlock it. Inside, you can find an Audio Log and plenty of ammo to refill your weapons.

Leave that room behind now and head back around the room. You'll find an area where the ceiling has crumbled down and you can use it as stairs to reach the higher area. As you head around that higher ground, watch back to your right. Two gunmen will appear from a hallway, so quickly find your way to some cover and return fire until they drop. 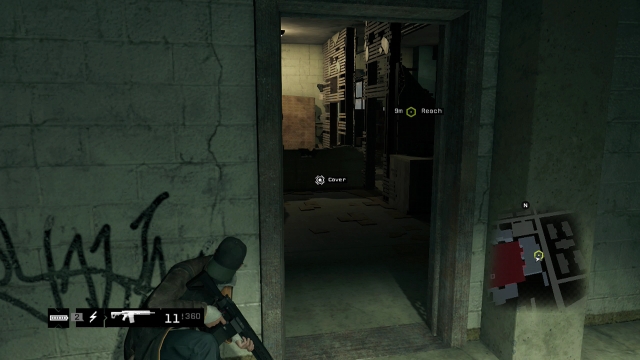 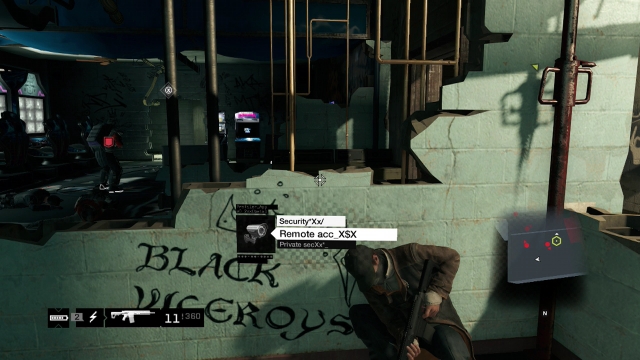 Now go in the direction from whence those men came. You can head down the hallway to the left, and then you'll head into what's left of another small room. Head through a doorway to reach the next point marked on your map.

Looking into the next room, you can find another Audio Log, situated on a padded chair. Beyond that is a security panel on a wall that you can scan to open a door. The next room beyond that provides access to the arcade area you may remember from a previous visit. It is guarded now. There will be a heavily armed fellow amont the resistance. You may also find someone carrying explosives. If so, you may be able to set off his explosives to take out the whole group. Otherwise, possibly toss in a frag grenade, or take out the two weak gunmen and cause the third man's headset to malfunction. If that happens, you can rush by while he is distracted and hide at the next wall.

From there, head around and you'll find a ladder you can climb along the next wall (which also serves as a checkpoint, handily enough). Just be careful when you get to the top of the ladder, though, as a guard is waiting up top. You should wait to climb until he is looking away (you can watch his indicator on the mini-map) and then dash to hide behind a wall. Wait for him to come around, then perform a takedown move. 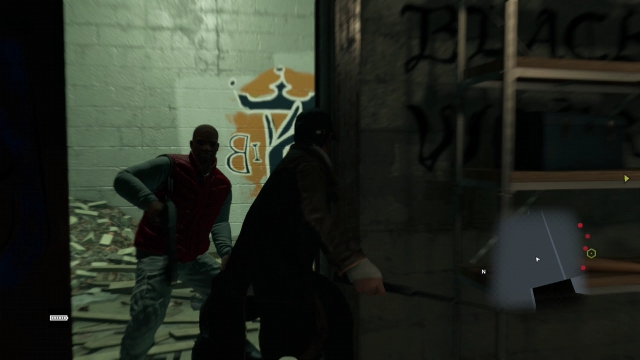 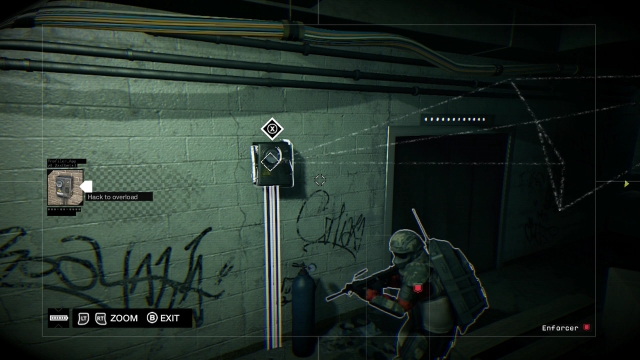 You can perform a similar trick on the next few guards. The room at the top of the ladder is adjacent to a 'T' in the hallway, which means there's an awful lot of potential that someone will approach you before you're ready. However, you can use their impatience to your advantage. Wait near the doorway that leads into that hallway, and a soldier or two will come find you, one at a time. This makes it easy to take them out and make the next few twists and turns a lot safer for yourself.

When you have taken out all of the ambitious fellows who are inclined to go searching for you except for one, quickly look to the camera through the door. Jump into it, then look left down the hall and travel to that camera. Then look down at the corridor. You'll see an explosive panel nearby. The last guy to start toward Aiden's location will be one of the heavily armed guys. Let him get near the explosive panel, then blast it so that you take out that guy without having to engage in a shootout.

Continue into the next room from there and make sure you scan the Audio Log. Then continue to the next point indicated on the map. 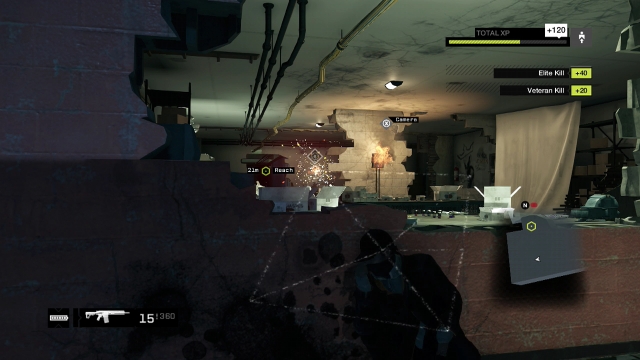 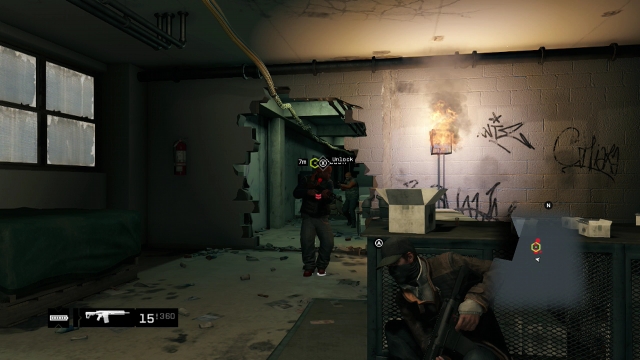 The lights will flicker out. It's not indicated on-screen, but you've reached a new checkpoint.

Ahead and to the right, there's another ladder you can climb. Ascend it to the overhead floor and then climb yet another ladder to an even higher floor. Quickly duck against the low wall. There are some gunment on the other side, and now they're going to head to the right and come back around to your spot. They'll see you shortly, or you can be proactive. Scan the panel on the nearby wall and you can take out two or three gunmen with an explosion. Then look to a distant wall and do the same to take out the gunmen in the next room. If there are any stragglers, shoot them.

Now head through the rooms you have just cleared. Don't go too far, because they lead into a hallway and there will be gunment advancing along it. Duck behind a wall, then take them out as they pass through. You're at another map indicator. Through the door, you can see and scan a panel to unlock a door along the hallway's left side. 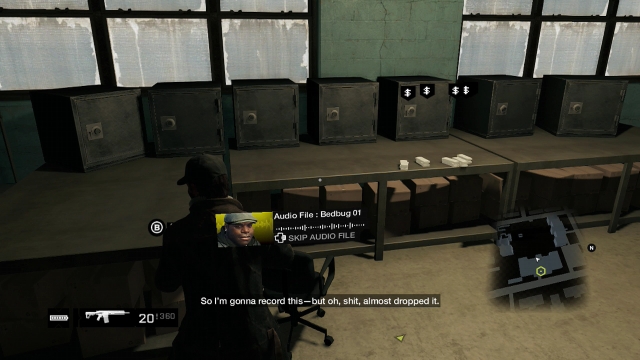 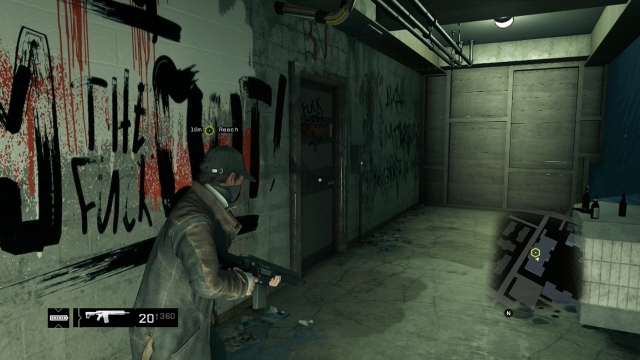 If you head in that door, you can find an Audio Log and some cash on a table. Then return to the hallway and proceed carefully along it. You can warp ahead to the cameras in that direction (remember this area when Bedbug was here?) and close the shutters if you like. As you reach those closed shutters, head right and then stick to that right wall as you head around it.

In the next hall, there's a panel you can scan to unlock the nearby door. This, you should recognize, is the area where Iraq has set up his server room. You're very close. Head through the door. The next room is empty except for yet another panel you can scan. Then pass through the door to reach your destination as a new mission objective appears.


You've come to do what Bedbug couldn't, and this is your chance. Hack the panel on the next wall, then pass through the door.

Travel forward and down one last hall, then left into the room with the servers and fans. You'll have the option to hack. As you do, you'll call and talk to Clara. Then the effort concludes and you have one more objective.


Naturally, your ultimate goal was to get in, get the data and escape without being killed. You've done the first two parts, but the third part will be more difficult. As you start back out of the server room and pass the next map point, you'll trigger a scene with an interesting revelation. When it concludes, you need to get moving.


Head forward through the area and you'll soon come to a rooftop. Iraq is out of sight. You're in a wide, open area and can see the city skyline and even the plaza below, but there's not a lot of time for sightseeing. You can set IEDs here if you like, for future use.

When Iraq finishes his speech, he'll send his men after you. They come at you in a small group of three, wearing armor but not terribly dangerous if you hit them with headshots or takedown moves.


After you take down that initial force, listen to a little bit more of Iraq blabbering, and then he'll send out a heavily armored soldier. You can use your frags and IEDs that you set a moment ago to eliminate him most easily, or you can hide behind a pile of wood and use the Enforcer Combat Takedown move if you have learned it. 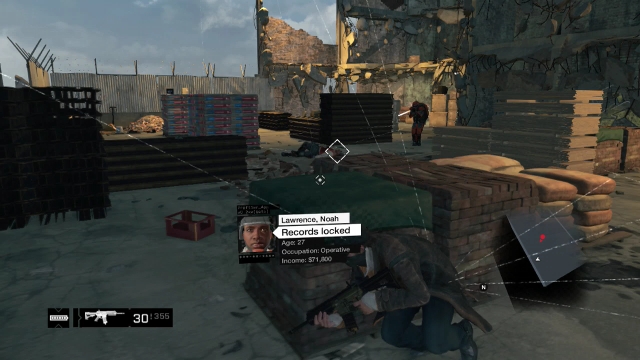 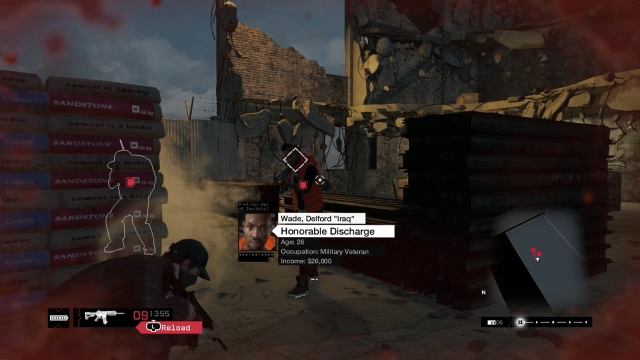 After you eliminate the Enforcer, or perhaps even before, there is still the matter of Iraq. He'll join the Enforcer a short time into the battle. He also wears armor, but he's a great deal more susceptible to head shots so you shouldn't have much trouble eliminating him. If you do, that's for the best. It allows you to only worry about the Enforcer, which is trouble enough.


If you kill Iraq and any of his guards are remaining, you still have to take them out before you're done here. Do so.


Now you'll have to descend through the building, the way you came. There's no special art to this. Just keep working your way down along the floors until you reach the lowest level, then exit the area to finish the mission.