This is one of the most involved missions in the game, and you can't even start it immediately. Before you can begin the mission properly, you'll need to infiltrate another control center, this time in the Pawnee area of the map. Infiltrating this area will be less convenient than usual, because there's not a lot of technology out here. You will have fewer cameras with which to work. 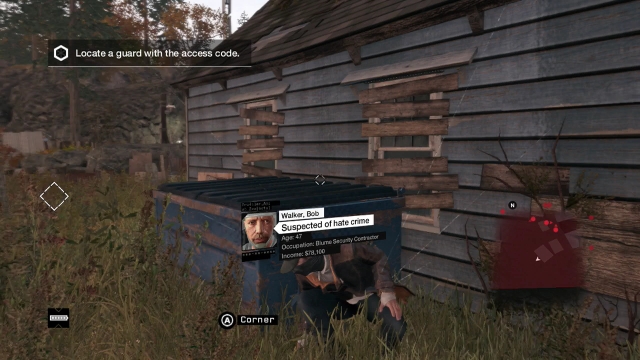 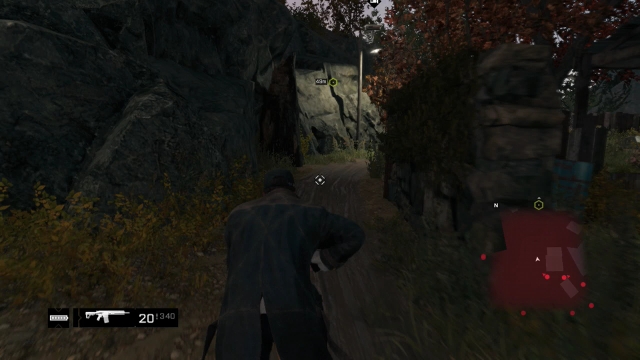 Head up the dock and then keep to the right hill as you advance. You can run around behind a guard in that direction and get behind some cover just beyond his post, then from there see a cabin. Wait for the guard that circles that area to come around. Take him out with a takedown move. Then look to the left, where a dirt road winds through the area on lower ground. There's a camera along a pole there. Travel to it, then look along the road and travel to another camera. From there, you'll have a view of the docks and one of the men in that vicinity has the access key. Now you just need to reach the server and hack it.

The server is on the opposite side of the road from Aiden's current location, so cross the road and head along a trail in that direction that leads along a ravine. It leads to a shack where you can find the server. Play the hacking mini-game to gain access. Find some Video Logs (two visible from the initial camera, then two more after you change perspectives) and then finish hacking. Now you need to get out of the area in one piece, and the alarm has been raised. Head out of the building, climb over a fence to your left, then dive into the water. Swim across to the far shore and then head uphill to find a car and drive away. When you get out of range, your new destination appears on the map. Go there and accept the mission to get started.


After Aiden reminisces, you can get to work. Look around the immediate vicinity and you'll see your destination across the road. Cross the road and head around until you can see into an enclosed porch with computer. Hack it.

Use the Profiler to find the reset code.


Your hacking attempt fails, so a reset code is sent to someone near the marina. You can look around the corner of the building and start through the crowd of people. This is a great area to get some wealth and to intercept Audio Log files. 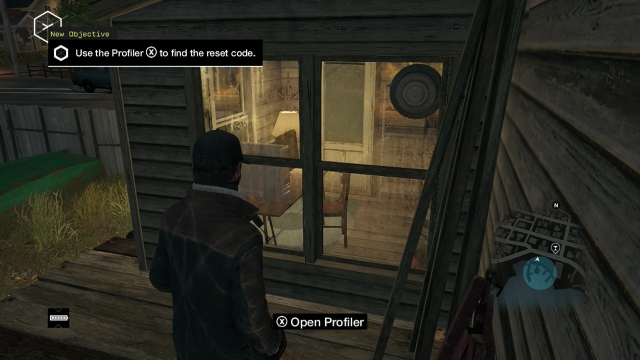 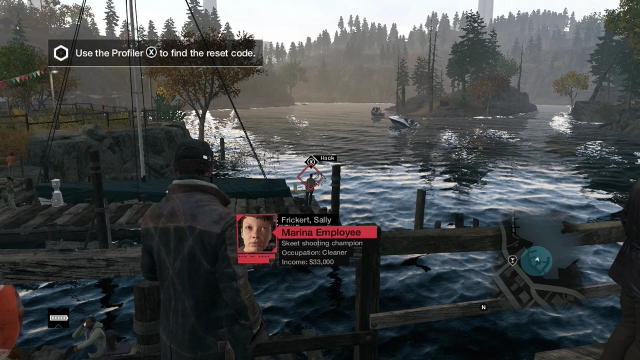 When you're done looting and ready to proceed, look for the dock that extends from the marina building and out toward a gazebo. The marina employee that you're looking for is seated on a bench there, looking out over the water. Get close enough and hack the phone for the code.

Unfortunately, that employee doesn't have the code. You'll still get some info, though. Now head to the left railing and look down at the docks on the lower marina level. There is an employee down at the dock. Scan her to get the actual key.


Now head back to the window and try hacking the computer again. This time, you'll be successful and receive a new objective.


Look to your map and find a new destination. Set a waypoint, then travel there. You'll arrive at a front gate, which is locked, but you can look overhead to see a mounted camera. Hack into it. 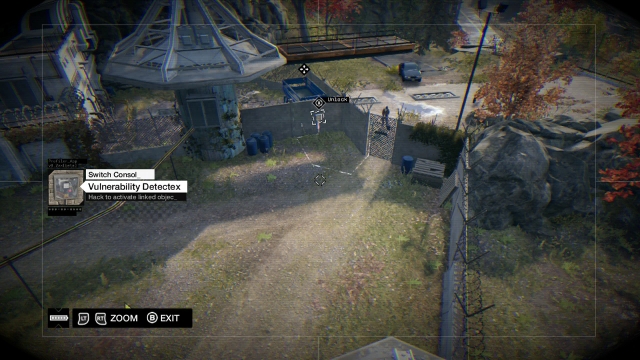 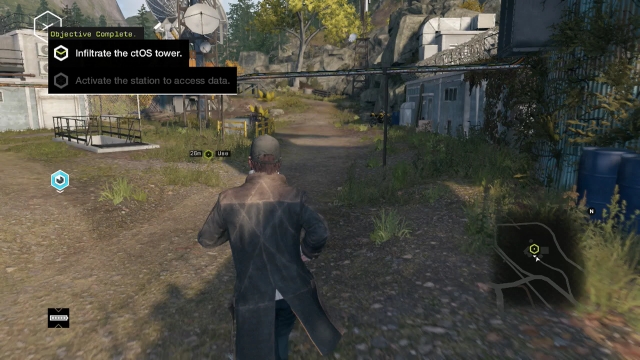 From that camera perspective, look directly ahead and you'll see the panel to unlock the gate. Do so. Then head inside the complex and travel toward the marked point on the map. You'll get close and gain a new objective.


You can head down the stairs in a nearby stairwell to find a locked gate. There's a camera visible through this gate, so travel to that camera and look left. You'll see a security router you can intrude. Do so. 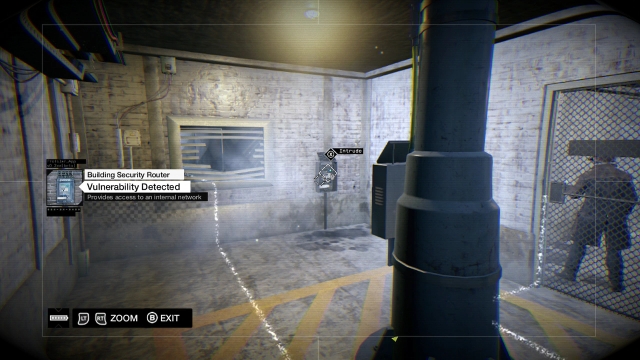 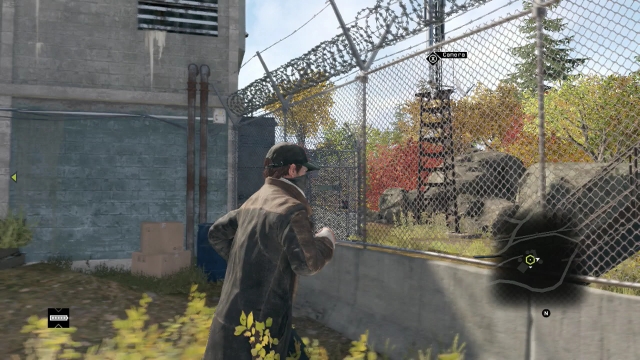 Now you'll gain access to a new hallway corridor. To the left, you can unlock a switch console. Do it, then return to Aiden. He still can't pass through the gate. Head back above ground and walk to the back fence. You can see through it to a camera on a tower. Hack into that camera.

From the camera, you can see two satellites ahead of you. Hack to the closer of the two. Look left to the Antenna and hack it, turning a ledge on the satellite to your left so that it meets the stairs. Now have Aiden walk to the stairs and climb onto the ledge that moved into place. Once he is in position, hack back around to the same camera. From it, you can see Aiden standing near the end of the ledge. On the closer building, you can also see a switch console to unlock. Do so. 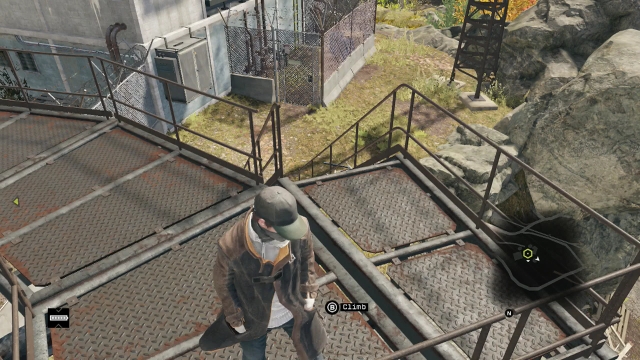 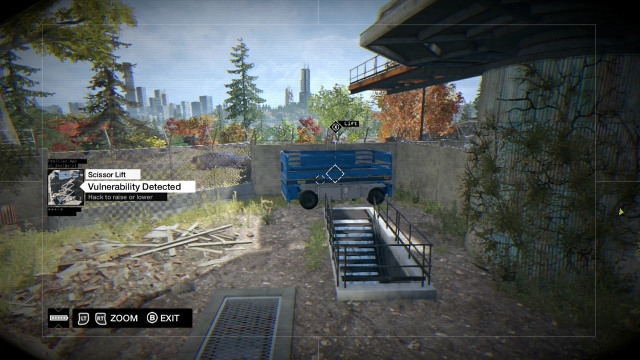 Now hack the antenna again, which will turn the ledge Aiden is standing on so that it comes to the top of a different set of stairs. He can descend them and pass through a gate that is now open. Once he does so, he can then climb up a ladder ahead to reach the roof.

On that roof, he'll see the attached satellite. He can head up some stairs to the right and walk out near the end of the curving platform, then hack into the overhead camera and from there hack around cameras to hack a hydraulic lift (for future use) and to hack the antenna again. Doing the latter will spin his ledge around to a new roof raised ledge. 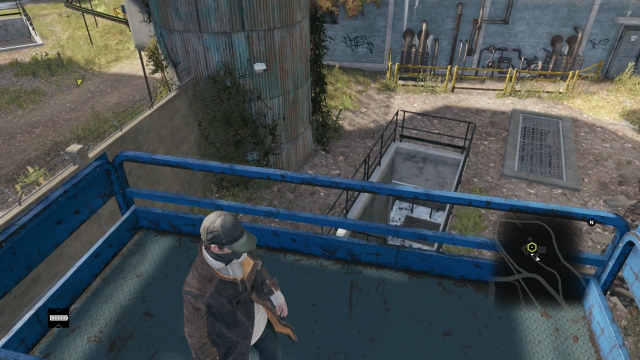 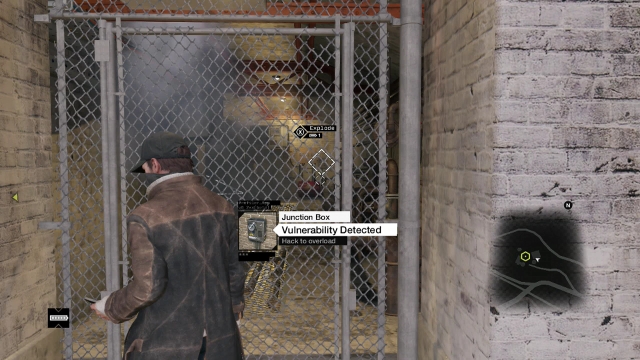 Walk over to the new ledge, then look out and hack the antenna again. You'll spin the ledge back around, so that it's easy to climb onto the raised hydraulic lift. Lower it from there, and then head down the open stairwell just ahead.

The stairwell lets you access the long hallway that you saw previously. Head along that corridor to find an Audio File. To the right, there's also a notebook computer. Hack that. Then travel back down the hallway and look through the grated gate. You can see a junction box ahead that you can hack to produce an explosion. When you do that, you can pass through the gate and then unlock the switch console ahead.

After hacking the console, head out through the opening and proceed along the trail. You're back along the edge of the main yard surrounding the antenna. Head downhill and proceed back down the stairs that lead underground near the base of the antenna. Finally, you can pass through the gate and use the terminal. Using the terminal triggers a scene, and then you will have a new objective and a new point to travel to on the map.


When you get to the bar, head inside and then start forward. You can check around to hack a novelty moose head that will tell a joke, a Rabbids doll on the counter behind the bartender, and even a trout on the distant wall that will rap when you hack it. Just do all of that stuff before you head forward too far, because as you get near the bar, a sequence follows. 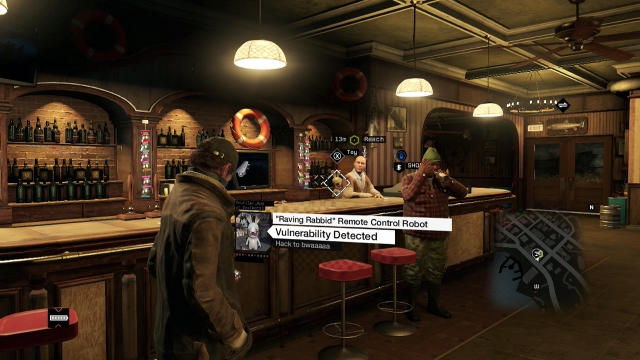 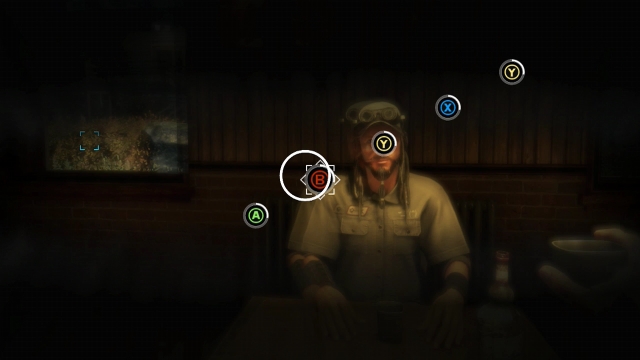 Now you are trying to drink another guy under the table, so to speak. Each time you take a drink, you have to move the analog stick over a series of letters that correspond to buttons on your controller. There's a limited amount of time to hit each one, and controls are sluggish. You'll need to clear several such puzzles (four, by my count). The last one is different, in that you have to pass over an unknown button and then press it when it is revealed to show a few more.

A scene unfolds when you finally succeed at the drinking game. Then you have yet another new objective.


Just follow T-Bone along the path. He'll demonstrate a trap.


Now try activating it yourself, with a quick scan.


A new marker will appear on your map. After grabbing the rifle like T-Bone suggests (it is propped up on the junk to his left), set a waypoint and head to the gas station as instructed. You're off to find T-Bone's truck, which will be guarded. Along the way, as you get near, you should see a motorcycle parked by a fence. Keep its location in mind. 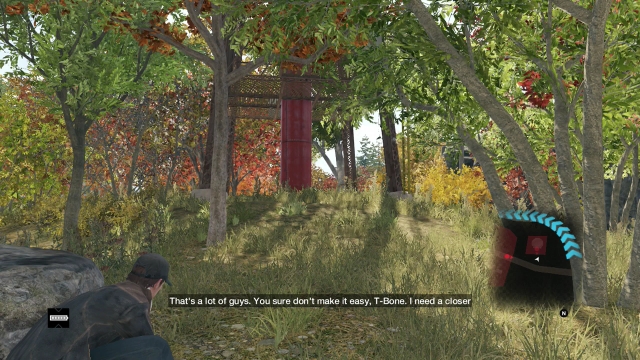 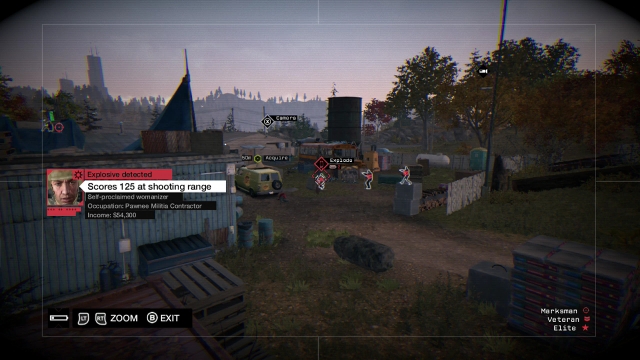 As you head through your general destination's wide front entrance, you'll see that the map is covered in red. There is a stand of trees near the right side, ahead of the main junk area. A sniper is positioned on that platform, and a camera. Hack into the camera, and look down over the area you will be entering. You should see T-Bone's vehicle at the center.

You can try gunning everyone down, or you can backtrack to a motorcycle and ride it into the zone, then ditch it and jump into the van and maybe take off with it... but probably not. A more straight-forward approach is safest. As usual, you can hack cameras and make the way easier (and you can climb the platform to take out the sniper so that he's not pestering you from behind), then run in and do cleanup duty with a gun. Then you can jump into the van and drive away from the scene.

Drop off the truck.


Wait to clear the last thug out of the area until you are near the truck. When you shoot down the last guy, reinforcements will arrive just a moment later, so you want to be jumping into the van and on your way out of the area. A new point appears on the map, so drive to that point and deliver the truck to the point indicated. You'll have to deal with cars trying to ram you off the road.

Kill all militia members or escape.


Once you pull the truck into the desired location, most of the militia members will be taken care of by one of T-Bone's traps. There will still be a few left, though. Jump on the motorcycle nearby, then race forward and go flying off the rock ledge. You'll cruise toward the far side of a river bank, but may not make the jump. 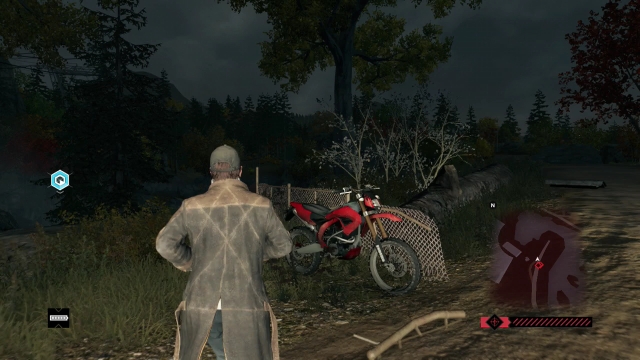 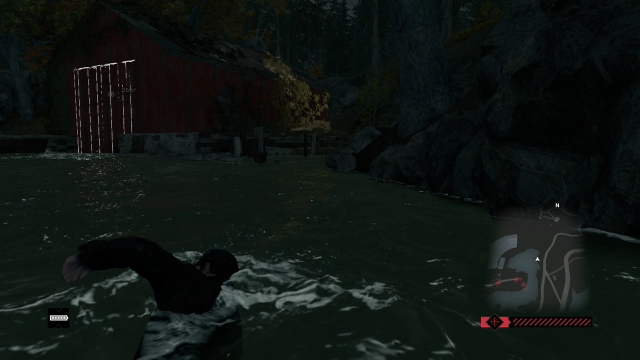 If you don't, that's fine; you'll land in the water and you can swim left through the water to reach a shed. Hack its door to open it and find a boat slip. You can climb onto the concrete slab and head around to the boat and ride it out of the shed. Your movement will attract attention, but you can make your way along the river and eventually head out into the wide open lake. That's far enough that you're away from your pursuit. The mission finally ends.

NEXT: Act III: A Pit of Paranoia