You'll need to travel back to familiar territory for this mission, which will primarily take place in the apartment building complex where you first met Bedbug. Get to the point indicated on the map, just inside a building a few blocks from your actual destination, and begin your mission.


You've deposited a bug in the trash. Now you need to head over to the complex and find yourself a place to hide. 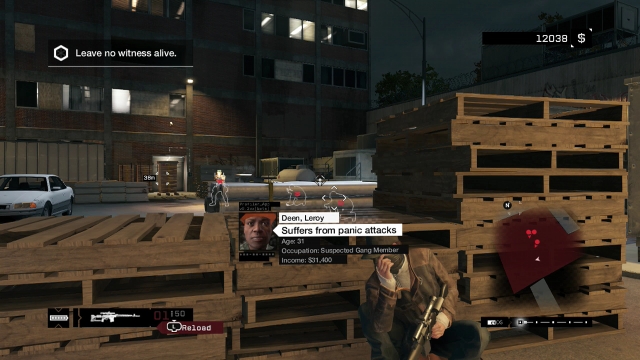 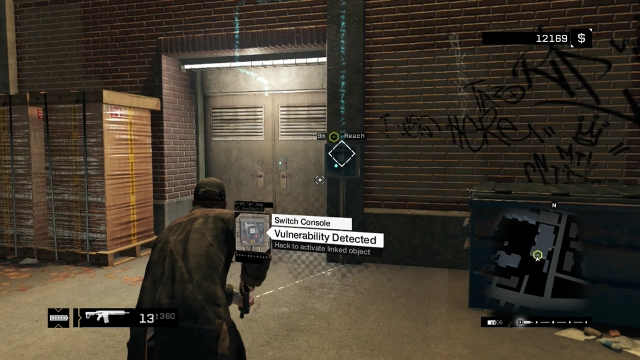 You can approach the complex however you like. A front approach actually can work pretty well, because there are only a few thugs in that area. You have plenty of shelter, so you can take out a guard or two before they know what's happening, then blast your way through the rest.

Then you can safely walk forward to a wall. Hack a console and pass through the door. You'll get your next objective after a scene plays.


You have to direct Bedbug so that he can reach the server room you want to access. You can direct him to points of cover, like you could Rabbit in a previous mission. 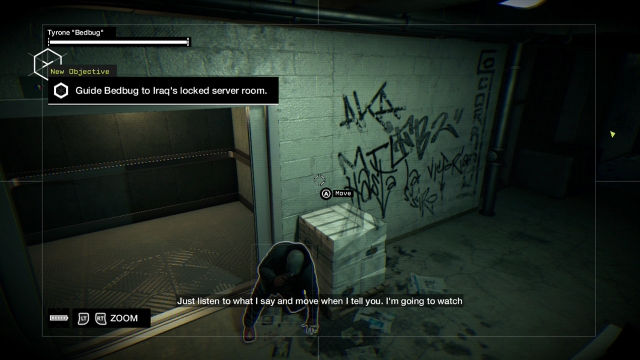 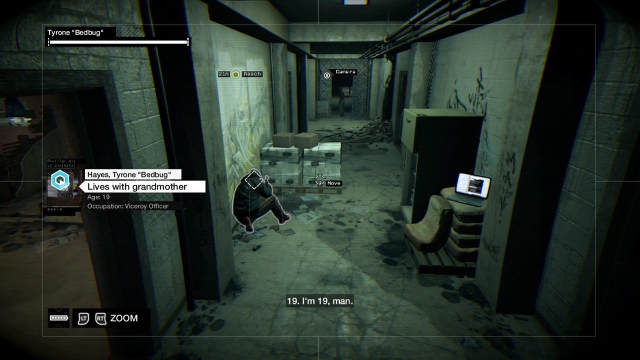 Bedbug starts out crouched behind a crate as a guard approaches along the hallway. Wait for the guard to disappear around the corner, then have Bedbug run quickly forward, past that opening and along some crates beyond it. You can warp ahead to the next camera, and direct him from there. You want to get him near the end of the corridor.

Now Bedbug should crouch behind a couple of crates while you talk to him about his age. You can watch him from a camera on the wall in the corner. Bedbug is just below that camera, a door is to the left, and a camera is to the right. Aim your cursor through the door, at some crates, and have Bedbug dash over to those crates when the guard in the next room isn't looking. You're going to need a better view now, though. Warp to the camera in the laptop, then to one on the back wall in the room where Bedbug is now positioned. 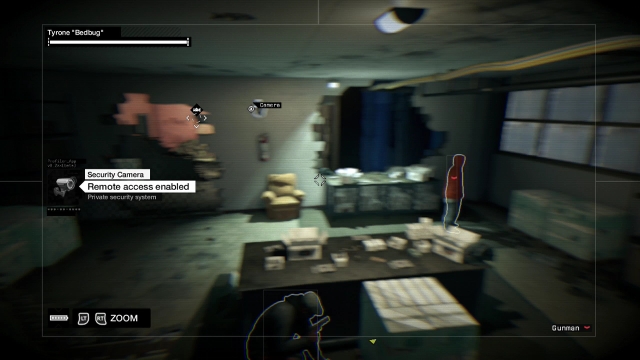 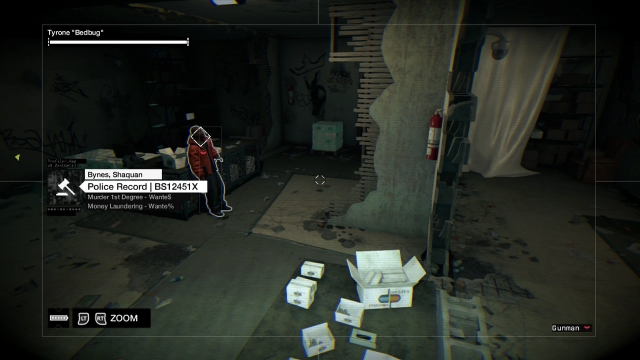 Bedbug is safe for now, but his position isn't especially useful. Look on the far wall, past where the guard is patrolling. There's a camera there. Warp to it, then look down ahead of you. A corner is visible here, and you can also see the guard. Wait for the guard to start back to the right, with his back to Bedbug's current location. Then have Bedbug rush to the new location. It is a safe place to hide, as long as he doesn't move. The guard won't see him.

Now look to your sharp right, along the wall, and you'll see through an opening to another camera. Travel to that camera, so you can see the hall where Bedbug needs to go next. You can keep an eye on the patrolling guide that is now to your right, and you can see a guard to the left, in the room toward which Bedbug is headed. There is a camera in the back corner, opposite you. Hack into that camera. 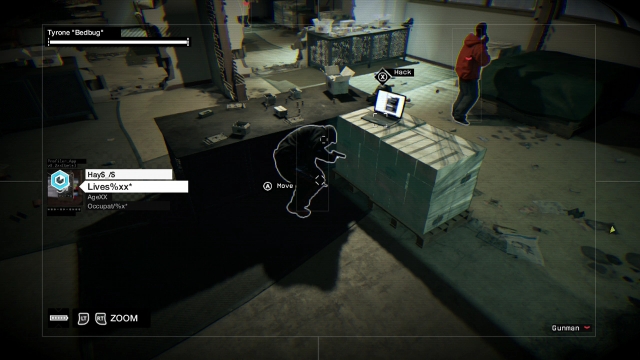 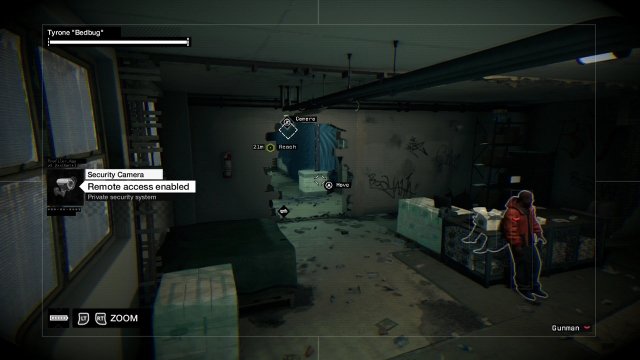 While in that new camera, look right. You will see a notebook computer, and to the right there is a smarphone sitting on a box with a green tarp over it, near the wall. You can use that to attract the attention of the nearby guard, as the guard in the other room starts walking toward the right. Then quickly have Bedbug move into position so that he is hiding behind the crates on which the notebook computer rests. You can hack the notebook computer for a note, as well.

You'll need a view of the area to the right now, so head back to the camera in the opposite corner of the room. From there, look to the opening where Bedbug needs to go. You can see a stone slab at the base of a column, and beyond it the blue tarp. Have Bedbug move to that position. 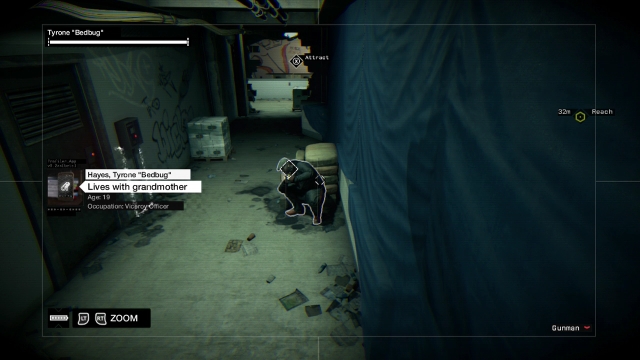 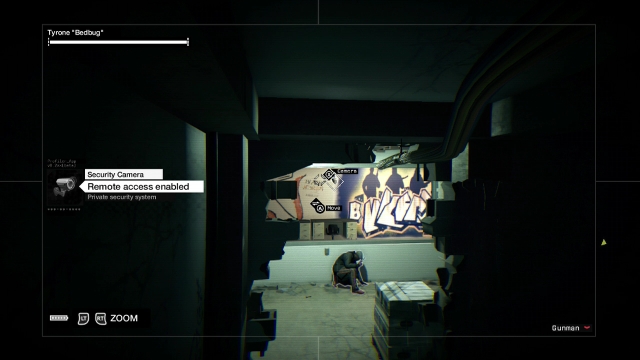 Switch cameras so that you're now looking at things through the hallway camera. There are crates here where Bedbug can hide, which he'll need to do because there is a guide that patrols back and forth at the other end of the corridor. Take your time moving along the crates to safely reach the end of that corridor.

There's a camera there, so ride over to that camera and you'll be able to see the guard better, as well as Bedbug's position. Through the opening, look to see both a camera and an attract point. Ahead of that, there's the low, pale green wall. Have Bedbug rush over to that wall while the guard is walking away toward the right. Then switch to the camera over the attract point. 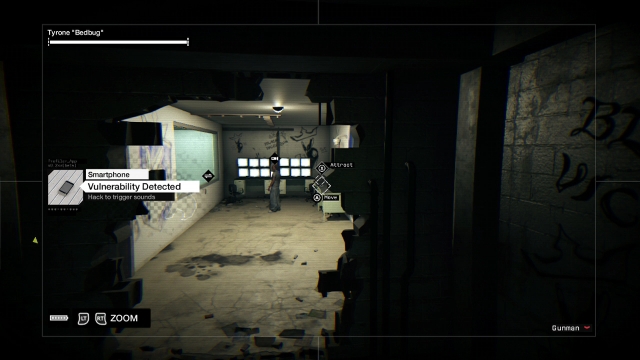 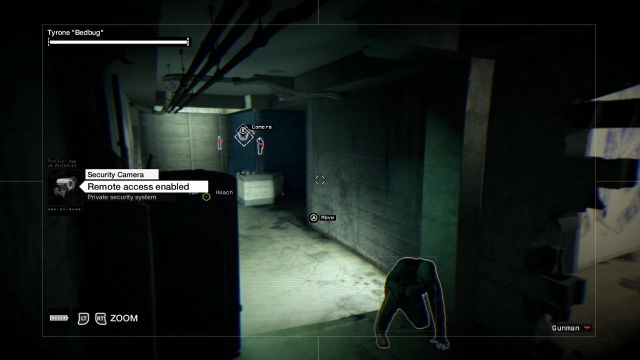 From that camera, switch to a camera to the left. You should now be watching the guide walk toward you and then away from you, while you can see Bedbug's outline to the left. When you're ready, hack the attract point to distract the guard. Then quickly direct Bedbug to the wall you can see, to the lower left of the camera. Bedbug will run through a doorway and around the corner, then stop where you pointed him. If you were quick enough, he does that all while the guard is looking at the phone.

To the left, past where Bedbug is now positioned, there's a camera near a blue tarp. Warp to that, then look ahead to the switch console. Have Bedbug move to the console. Bedbug will comment as he stands near it. Then you should hack Bedbug's camera. 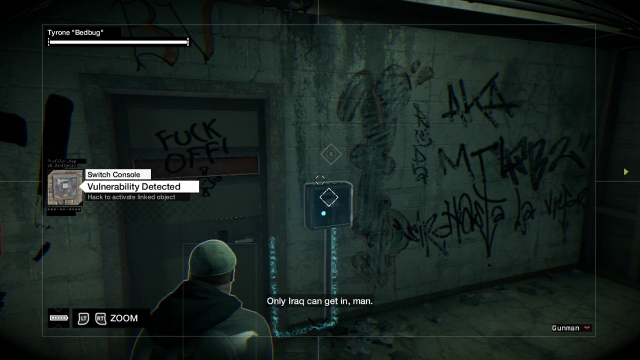 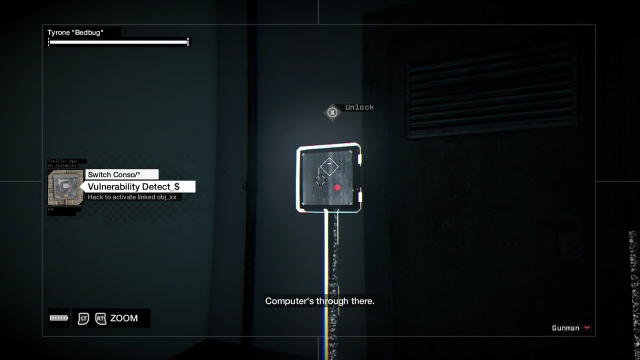 Unlock the server room for Bedbug.


Look left to find a camera. Ride to that new camera and now you are looking at a new security router. You can press the button to intrude. 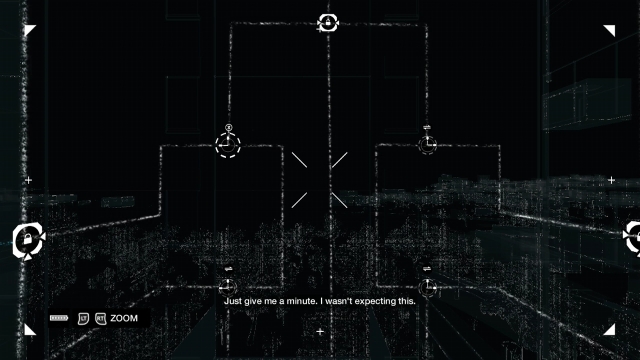 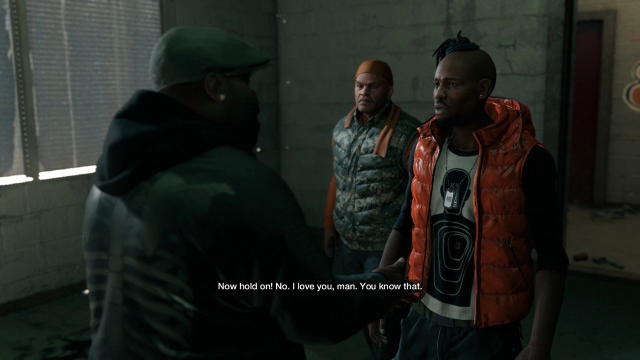 Now you have to solve a timed hacking game, but the timer only starts when you turn the piece highlighted in a red aura. Do some prep work first. Turn the lower left elbow so that it completes its circuit. Then turn the upper left one so that it does the same. The other two elbow circuits to the right will have to be repositioned as you quickly solve the puzzle. Start with the upper right one bent so that it directs the current down. Then turn the red-highlighted switch. The rest of the puzzle should solve itself.

You'll find a second puzzle after it, however. It's not timed, at least. You'll take care of the top lock last. Start with the three lower locks in the following order: middle, left and right. Then you'll have the juice to send current to the one at the top. It's a tougher puzzle than usual, but still very doable.

When you solve that puzzle, you'll have a glimpse of a rather unremarkable room. There is a switch console to the left, though, so hack that. Bedbug will enter and a scene follows.


Now you need to leave, and quickly. Head outside the building and run left. You'll find a car. Now you just need to drive out of the area. You'll be pursued, but you're used to that by now. When you make a clean getaway, the mission ends.

NEXT: Act II: Way Off the Grid