After completing "Tools of the Trade" to hack a facility, you can get back to work on the proper story, with a mission that counts toward your mission total. Start by driving to the campaign point indicated on the map, as usual. 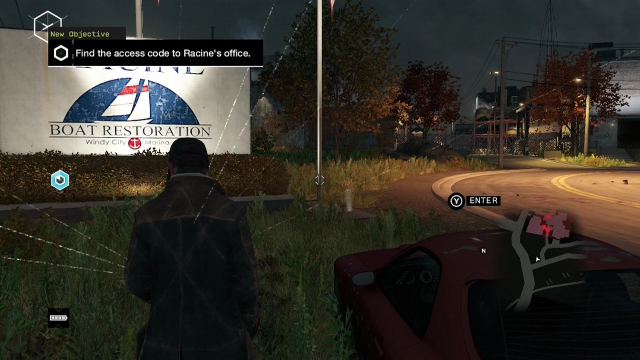 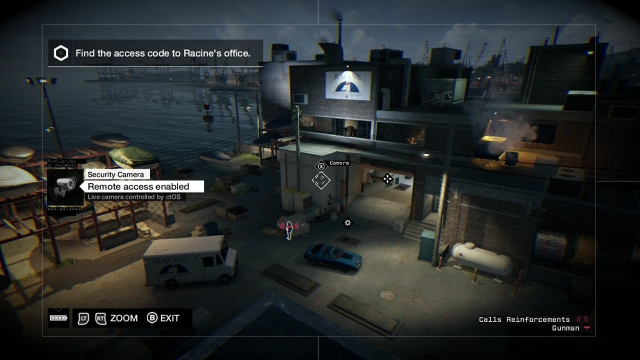 Head up the road toward the front gate. Open it if you like. Beyond the gate, there's a pole with a camera mounted high above the ground. Warp to that, then look ahead and to the left to find a camera positioned along the corner of that building. It looks out into an area with boats on racks.

To the right, there's a car parked near some crates and a guard and a car. The guard is capable of calling in reinforcements, so do keep that in mind. Near the guard, you'll see an open building, with a camera mounted to the left of the entrance. Warp to that camera. 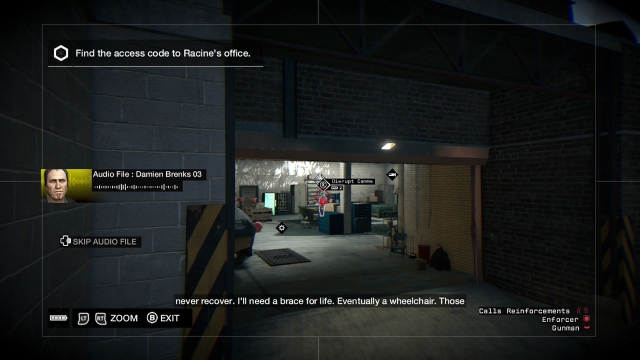 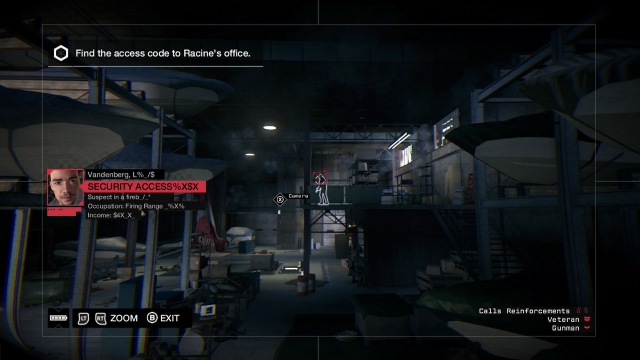 Look left from that camera, into the building, and you can see an Audio Log. Be sure to listen to it. The guard patrolling there is wearing armor, so keep that in mind. You don't want to get stuck shooting it out with him in a duel. If you don't mind raising the alert, you can hack the floor tile when he's near it to produce an explosion that will eliminate him. Then you can eliminate the guy toward the right as he comes to investigate, in the same manner (he won't be calling for reinforcements now!).

Near where you scanned the Audio Log, there's another camera on that interior wall. Warp to it and then to another camera that will be immediately visible. It looks out toward yet another camera, visible through a tinted window to the left of some shelving. Head over to that and you're facing a wall, over a green tarp. Overhead, there's another camera you can warp to. It provides a view of an overhead balcony, where a guard patrols. He has the access key, so scan him for it. Then you can trigger explosions to take care of a guard or two (and any respondants) in the area.


With the key acquired, your next step is to search the office. From the front gate, start straight forward. You should already have eliminated any guards outside, so you can run forward and past the open door to your right, where guards are likely busy searching for the disturbance you created. 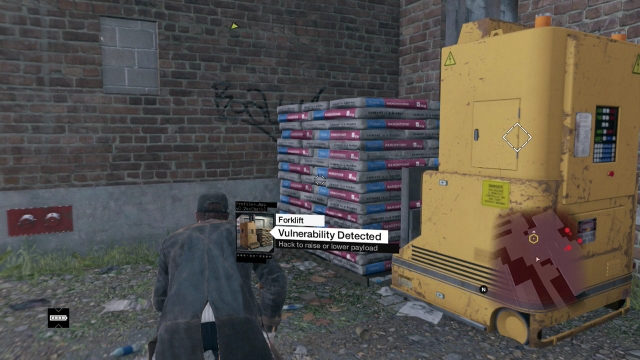 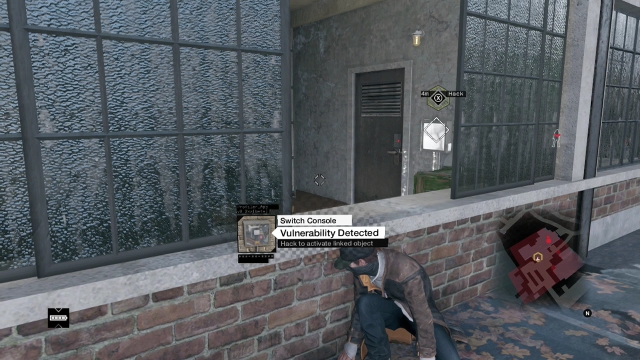 Continue forward from there, in the direction of the yellow icon that is active on your map. You'll come to a forklift parked against a while. Climb onto its load, then use the machine to raise that load along the wall. Now you can climb from there onto the roof. To your left, there's an air conditioning turbine. Head around it and skirt the rooftop extension. You'll come around a glass wall, and there's an opening. You can look through it to see the switch console you need to hack. Do so.

Hacking the console grants you access to the office. Head through the open door and enter. Inside, you'll head around the desk and find a computer you can hack. When you do, there's a new objective.


It's easy to see Racine, and to hack him from your camera vantage point.


You're in time to see that Racine is in a hurry to leave the premesis, following his phone call. 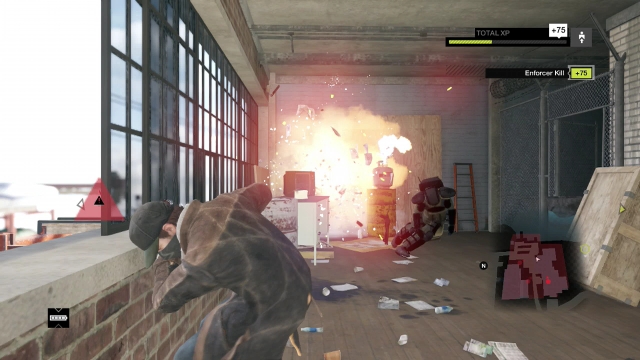 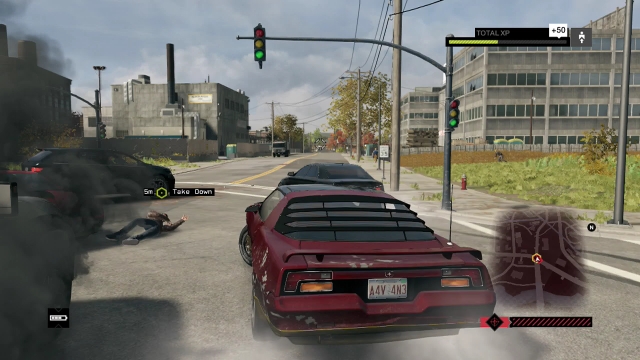 As you head back outside the office door, an Enforcer enemy is waiting. Everything will slow down as the game enters Focus mode on your behalf. Quickly press and hold the button indicated to hack a console, which creates an explosion to blast your enemy.

Hop through the opening to the left now, and drop from the roof to reach the ground near the car. Now jack the car and drive forward across the parking lot, through the open gate and onto the road. You can set a waypoint on your target now, and you should chase him as he attempts to flee.

Racine wants nothing to do with you, and all you want to do is exact sweet vengeance. Catch up to him and use traffic to take him out at a signal light, or whatever approach suits you. If he tries to run on foot, you can run him down or you can chase him on foot and shoot him. The only thing that makes it difficult is the other cars he has called to aid in his defense. They'll try and ram you as you drive along, and they're fairly good at sending you flying into a wall so that you have to spend time backing up before you can resume your pursuit.


Now all you need to do is escape. You can definitely use signals to help with the effort, as usual. When you get outside the search radius, the mission concludes and there is a scene before the next campaign mission appears on your map.