You can't immediately accept the next important story mission after completing the previous campaign mission ("Hold on, Kiddo"), because a detour is required. This particular mission doesn't count toward much of anything, but you are required to complete it anyway and you'll gain valuable experience points in the process. Head to the campaign point to receive your objective.


You are near a store as the mission begins, so just head inside to do a little shopping. You should purchase components, which are quite affordable. 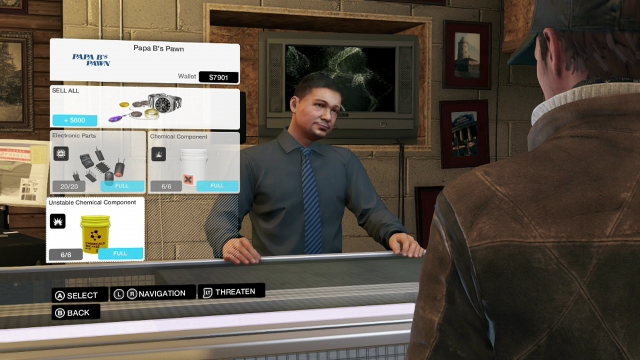 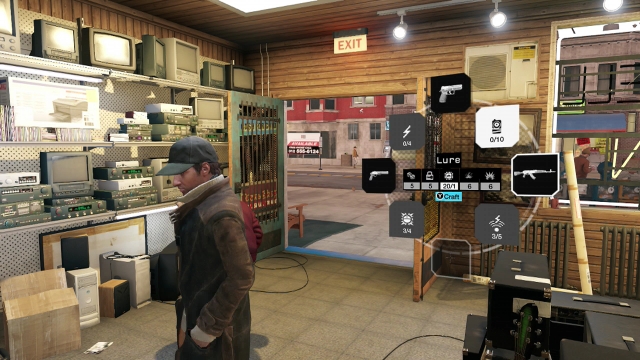 Once you make your purchase, you can press the button indicated for a crafting tutorial. Note that you will be limited in what you can craft, based on what skills you may have unlocked on the Skill Tree. Even if you haven't put any attention there, though, you can craft a little bit. You will also trigger a new campaign spot on the map. Head to that point and a new objective will appear once you get within range.


You should pull up just outside the gate, where a guy is talking on the phone. You're not getting through without an access code. 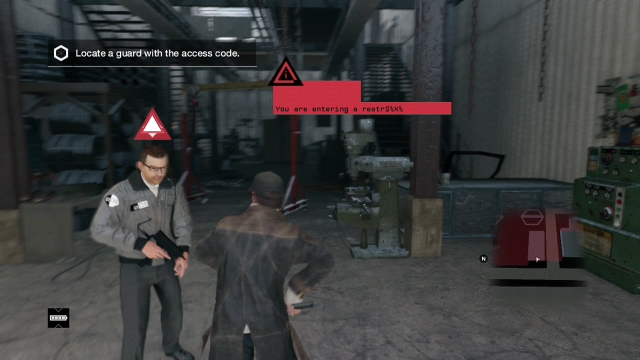 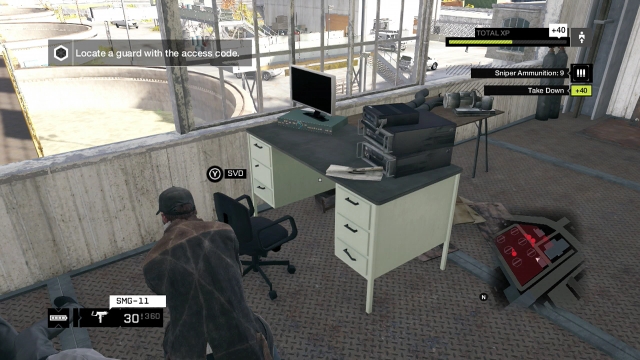 Head left of the gate to find a door you can open with your hacking. Do so, then wait for a guard to come down and look around. When he does, you can take him out with a takedown move. Then you can head inside the building and up some stairs along the right top. There are more guards at the top, though, so don't just run straight to the landing. Instead, look around to get a lay of the land.

To the left from the top of the stairs, there is a guard looking out over a railing ahead. More guards are to the right, along a balcony in that direction. You can distract the guard by hacking his phone, or you can take him out by hacking explosives he might be carrying instead. Or you can just run over to him and take him down if you want. Once you have done that, grab the sniper rifle he drops. Then get behind cover near the low wall the guard was standing near. Look out and sharply to the right to find a camera on a high pole. 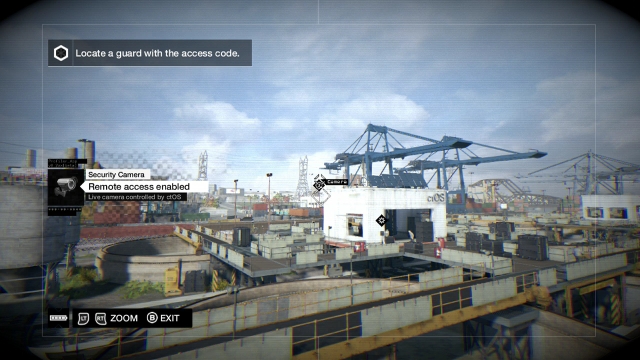 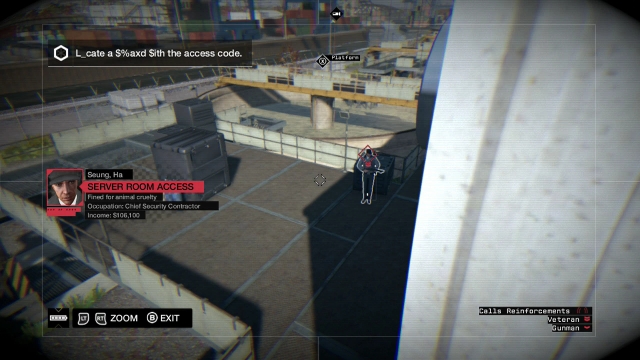 From that pole, look left and you can see the ctOS building. A camera is attached to the left side of that building, so warp over to it next. Then swivel to the right. Look down below and there should be two guards. The one standing near the crates has the code.


Download the code, as instructed. It's easy enough to do.


Now that you've downloaded the code, you can hack the server. However you're going to need to take a more personal approach as you proceed. 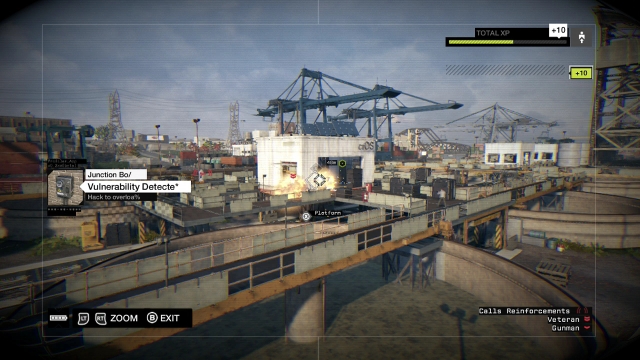 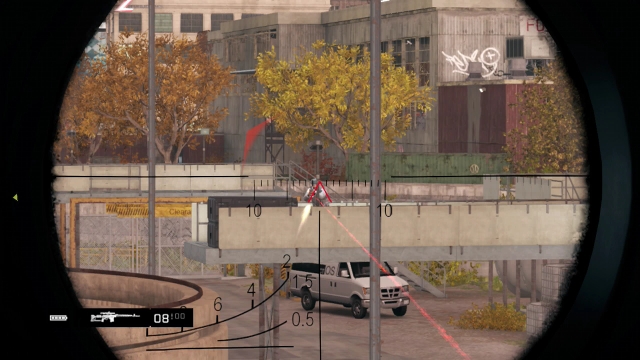 Start by hacking out to a camera and circling the area, hacking the environment to take out any opponents you conveniently can. You may be able to hit a few with explosive blasts by overloading circuits. Then you can fire at them from your position at the window, using the sniper rifle you picked up from the slain guard. The guys will shoot back, but they're not terribly swift and they are at a distance.

You can actually take out all of them from your vantage point. The guy you want to take care of first is the one who can call in reinforcements. He starts on the ledge near the fellow you scanned for a security key. When you eliminate him, then you can more comfortably take out his fellows, including some snipers on the opposite sides of the area. Then you can simply make your way out to the ctOS office scaffolding. 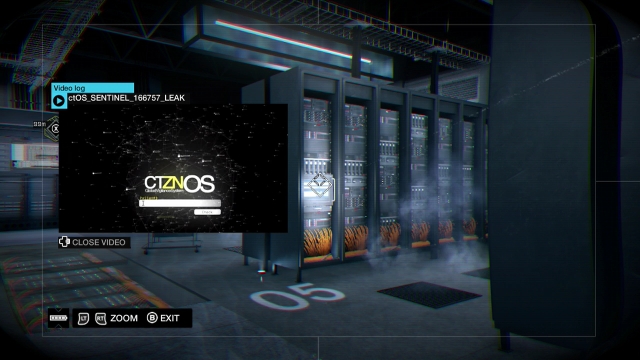 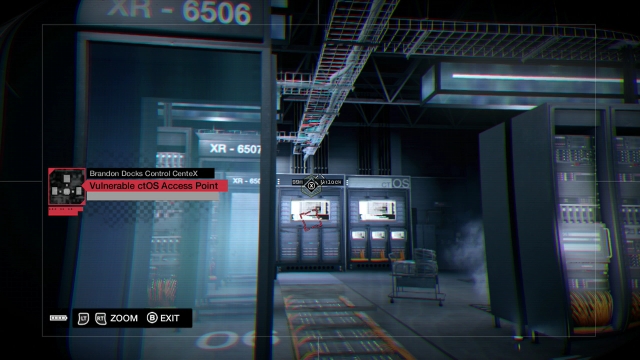 Head inside the building and look around to find the desired panel on the wall. Hack it using the key you obtained a short bit ago.

Not surprisingly, you have to clear a hacking mini-game to continue, but these are a piece of cake by now. When you gain entry after solving a single puzzle, you'll find three pieces of video data immediately visible to the left and to the right. Hack those, then also hack the camera directly ahead of you to warp to it.

From that camera, look to the right to find another video log to hack, then take care of the access point directly ahead. That completes your mission at hand, and paves the way for you to get to work on a mission that advances the story and counts toward your totals.