A phone call from Jordi after you complete the previous mission will provide a new campaign destination on the map. Head there when you're ready to get started.


When you accept the mission, a scene follows and it concludes with you standing in a prison cell. Naturally, your first order of business is to get out of there. 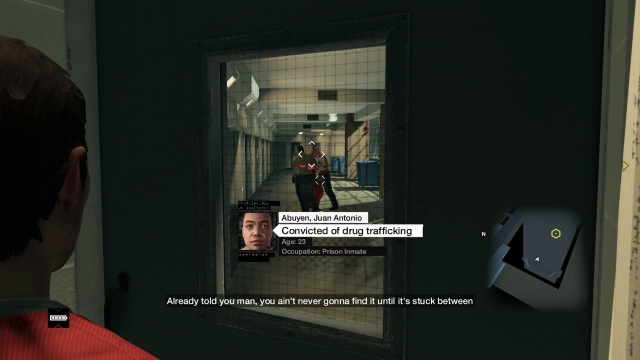 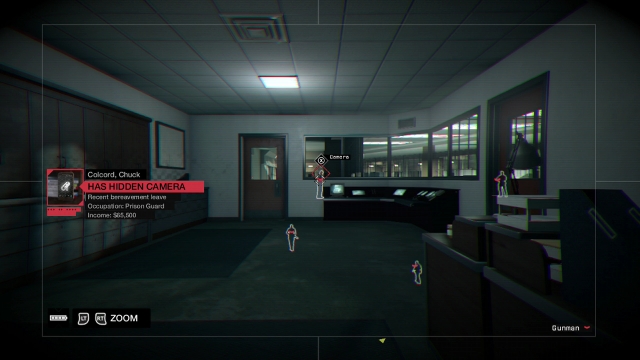 Walk forward to the window of your cell and press the button to look out. You'll see guards hassling an inmate. One of them has a hidden camera, so you can travel over to that using the phone that was smuggled into prison for you. From there, it's easy to head all around the perimeter of the prison, on the ground level or on the overhead levels. In this manner, you can reach a guard who is inside an office on the third floor. 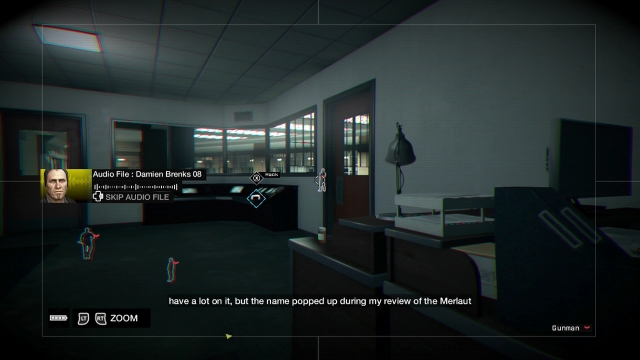 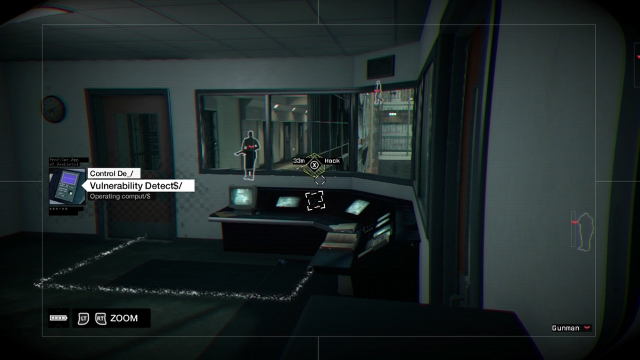 Ahead of that guard, you'll see your target, but first you should look to the right to find an Audio Log. It reveals an important conversation. Then go ahead an hack the console ahead of you for a System Key.

Now, look back outside and this time, you want to go into an office on the second floor. Look for a guard that is patrolling near there, and from his mobile camera you can hack into a camera that is positioned within the actual office. Then you can hack the console to open your cell.


Your next order of business is to find the man who prompted your entry into this facility in the first place. After automatically making a phone call to Jordi, you can head outside to start roaming. 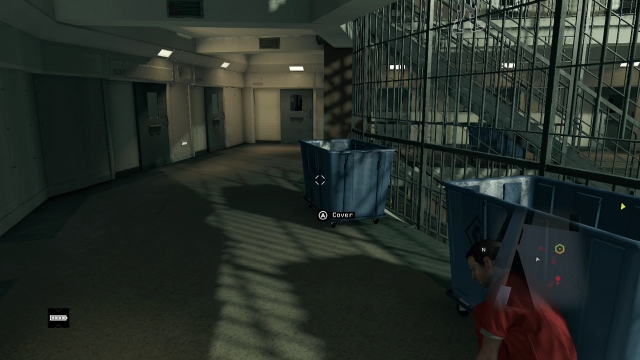 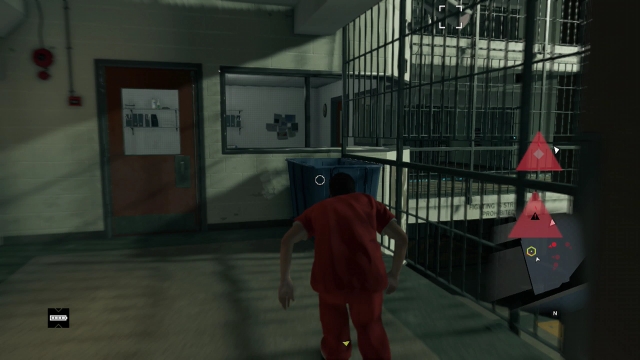 Unfortunately, the guards are under the impression that prisoners should be confined to their cells, so you'll have to sneak. Head forward along the walkway ahead of you, taking cover behind pillars and blue garbage bins. You can sneak from one to the next, but keep in mind that most of them have two points you can dash to for cover. The right of those two points is more exposed, while the left one is more sheltered from prying eyes.

Advance to the end of the hallway, where a pillar has only one point. Look overhead at the guards, and be sure that one isn't looking before you break free from your cover and head to the pillar to quickly reestablish it. Then from there, dash to a blue bin. It's easy to reach the door from there, which isn't locked. 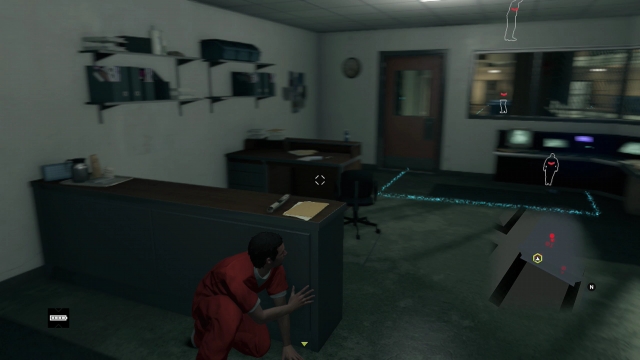 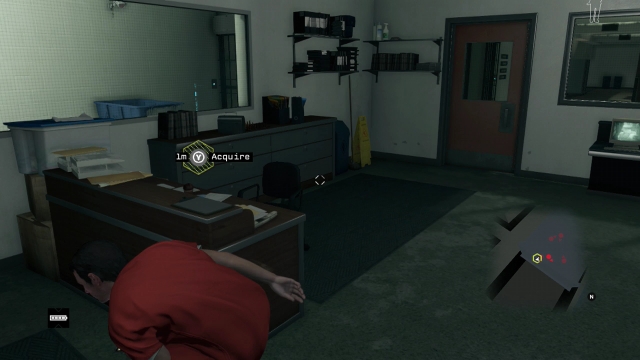 Inside the office, you can still be spotted. Fortunately, there is still plenty of cover. Hide behind a desk. That's a good point from which to grab components, as well. Then you can head out the door to the left to gain entry to a stairwell.

Descend the stairwell, to the first floor. Ahead, there's an office door. To the left, there's a console you can hack to unlock the door. Then you can head inside and press the button indicated to obtain the schedule, which reveals that you can find the target in the exercise yard.


You can continue through the doorway to reach another more open area, again with plenty of guards patrolling. There's also a low bar that offers protection here, to the left of a pillar. Move quickly to the pillar and get in place behind it, then crawl left with the bar shielding you, until you reach another pillar. There's a guard that walks back and forth to your right here. Near your current location, there's also a console you can unlock with a quick hack. 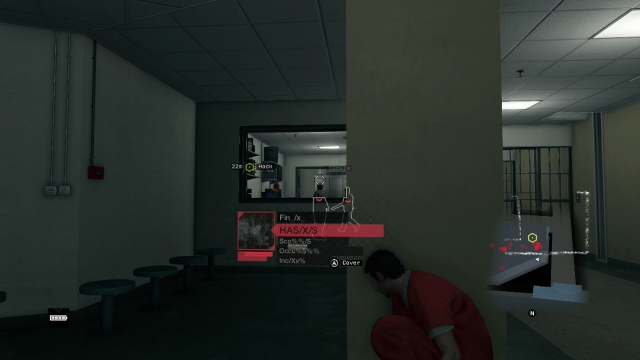 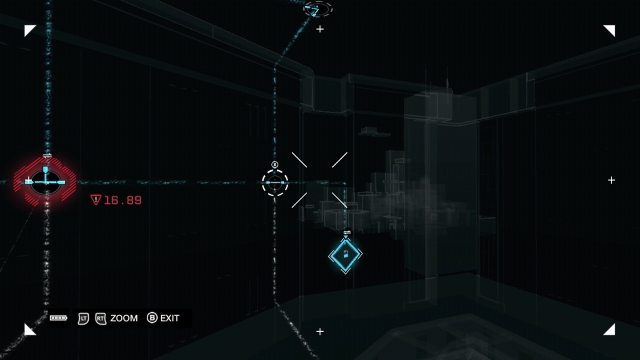 After unlocking that console, you can quickly run through as the guard's back is turned. There's more shelter just through the next door, and you'll have a view into another enclosed office. The guard there has a camera, so hack into it, and from there look out the window (when your host is in position) to see a guard pacing in another office. You need to warp over to his camera.

This guard lets you look through the server room. You can find a System Key on a desk, and also there's a lock. When you scan it, you'll open the door so you can hack the server itself, by completing the familiar hacking mini-game. It's a basic one, with a timer once you turn the red space. To make things easier for yourself, turn the other tiles so that they line up the way you want before you ever touch the one with a timer attached. Then you'll have a lot more time to make a final few turns and connect currents.


Once you finish hacking, you can start in on your next objective. You'll have a view of the exercise yard. 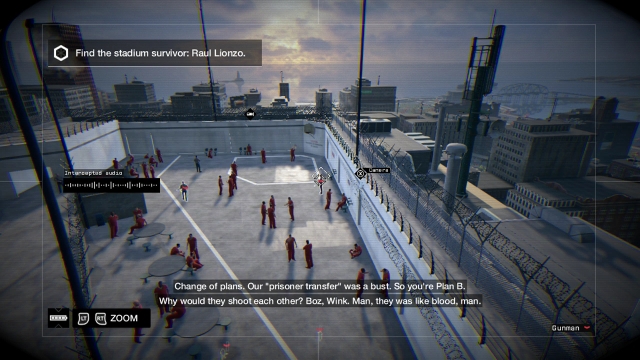 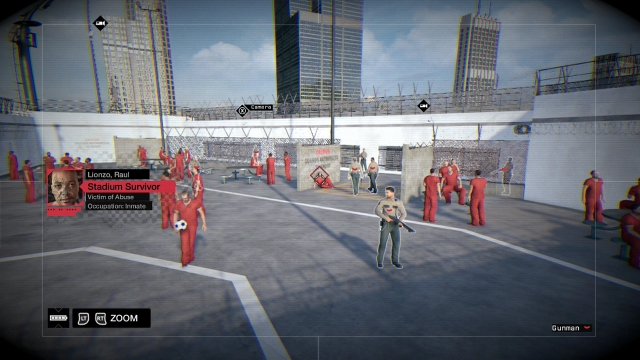 There's a guard standing near the corner of a court that you can hack for an Audio Log. Do that first. Then hack the camera on the post to his upper right. From there, look right to another camera near the basketball court. From it, you can see a guy slumped against the wall, sitting on the pavement. That is Raul.

As you watch, he'll be accosted by some guards who say they're taking him to see his lawyer. You don't believe them.

Get to the survivor in the basement.


Now you're back outisde the office. Creep around the wall toward the right, and look around the corner to see the elevators ahead. You can hack them, but you can't safely reach them if a guard is watching. 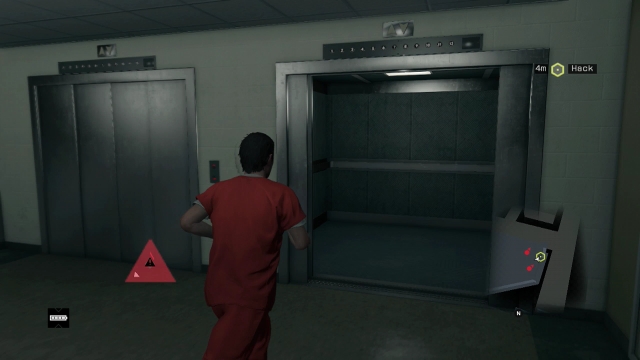 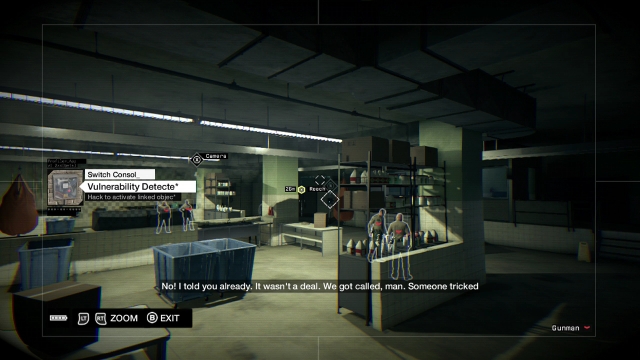 When you get near to the end of the wall, the elevators slide open. You need to watch that a guard isn't coming from down the hallway to your left, and you need to make sure that the guard in the office you're just outside is looking back the way you came or staring into space. Then you can dash into the elevator and quickly scan the panel to close the doors and ride down to the lower floor.

When you arrive, you can see an object in an office ahead that you can scan from the elevator. That will allow you to travel to another camera in the enclosed area beyond the office. From there, you can see some guards beating a suspect. Warp over to a camera looking toward those guards next. It provides a view of another object you can hack, so go ahead and do it.

Now you should be able to leave the elevator and head forward along a hallway leading slighty left, past an office. You can briefly enter that office if you want, for the M1014 (a shotgun that could prove useful very shortly). Then you can continue left to reach a set of doors that is your destination. Steel your nerves, then pass through the doors.

Take out the corrupt guards


As you head into the laundry room area, there's a bin ahead of you. This provides a great cover point, from which to blast the guards. They'll slowly move forward in an attempt to flank you, but they come only one or two at a time and their numbers are limited. You can easily tend to them with shotgun blasts. There is also a steam device along the wall that can temporarily incapacitate your foes. 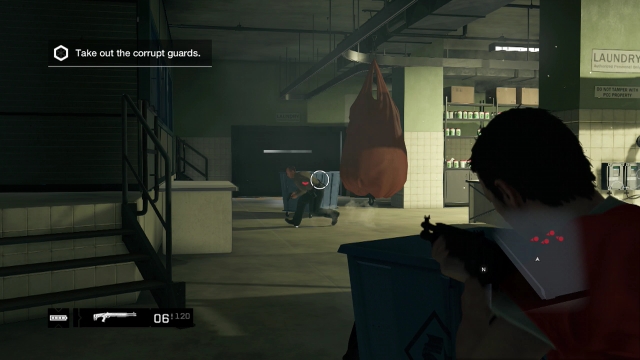 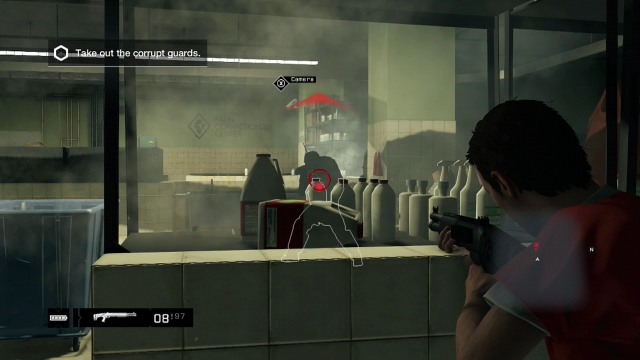 Once you take out the weak resistance that initially gets in your way, a new fellow arrives by way of an elevator. He is heavily armored, so a single shot isn't going to cut it. However, you can find cover and hit him a few times, then move to another cover point. Keep moving, staying far enough away from him that he doesn't have a chance to get around your cover and fire a clean shot. You can flank him and hit him for a few shots from a distance before retreating and repeating the process.

When you finally get in enough shots, the armored fellow will topple to a heap. You can head over to his body and check for the SG-90 gun. Be careful, though, because there may be another couple of regular guards that arrive on the scene. Take care of them and then you'll finally have a new objective.


After looting any bodies for weapons and ammo, head into a side room. There's a panel on the wall that you can hack to unlock the door. A scene follows automatically and you receive a new objective.


You'll call Jordi. The guards at large are alert to your presence and are working to take corrective steps. Jordi will deliver a care package that you'll come across naturally as you head back the way you came. Use it.


You're back in your regular duds now, but you still need to get out of the facility. 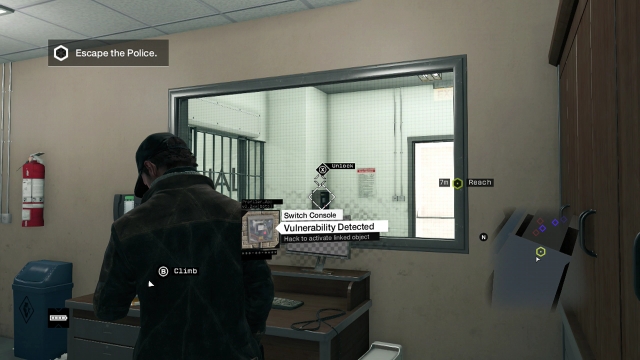 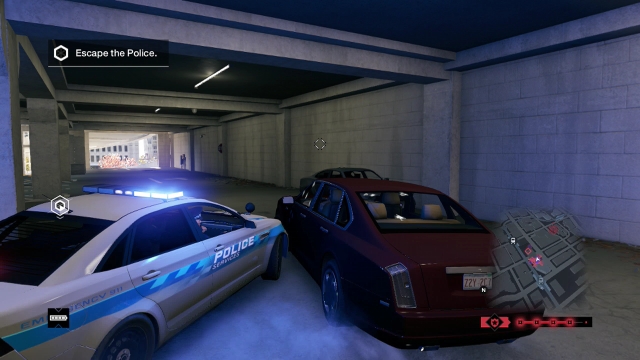 From where you appear in the hallway, head left and through an opening. Now, there should be an office to your right. You can check it to find an Audio File. Now, look out the window and you can see a panel on the wall. Scan it to unlock the barred door, then pass through the door and head outside.

You're on the rooftop, and there are police officers outside who are expecting you. They've taken up position behind their cars and are ready to shoot. You can run forward to get in a car, then back up and quickly ram your way forward before leading the police on a chase down several levels of a parking garage, to the street. From there, you'll need to evade pursuit by cars and a helicopter. You can also expect to deal with roadblocks. When you manage to finally get outside the police radius, the mission and the campaign's first act conclude.

NEXT: Act II: Hold on, Kiddo