Watch Dogs Guide > Walkthrough > Act I: Not the Pizza Guy

This mission begins under a different name: "Remember." That's really just a short part of it, though. All you have to do is drive to the point indicated on the map. It's a graveyard, so you'll want to park your vehicle at the entrance. Then head through to the tombstone indicated for a cutscene that serves as a flashback. 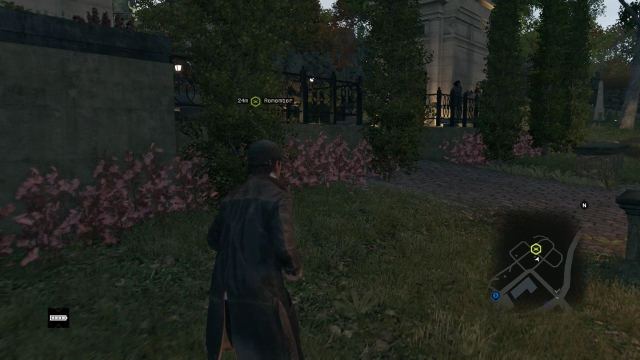 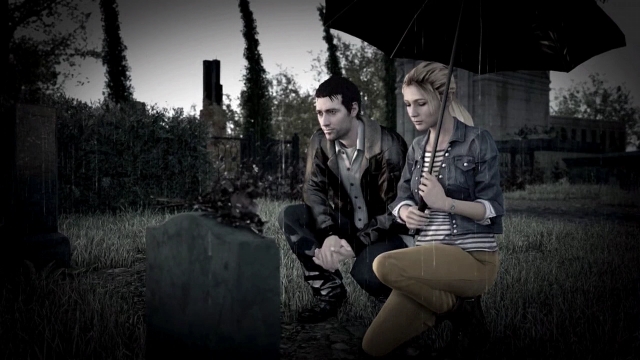 When that scene ends, you'll receive a phone call from Jordi, who has some bad news for you. Then the mission is over. You don't receive any experience points reward and the game doesn't count it as a proper mission. Now you can select "Not the Pizza Guy" from the map to get started properly.

Head to the point indicated and you'll arrive at a riverside park to find your first objective.

Climb to meet Jordi on the patio deck.


There's a deck ahead of you, on the stone structure. You have to climb up there to meet with Jordi. You can run forward and there's an ATM machine along the wall to the left. To the right from that machine, there is a low ledge. You can climb up a few ledges and over a railing to reach Jordi and a cutscene.


Your next goal is to make your way into the rail yard ahead of you, to fid the person who is working double time to make your recent crimes attract unwanted attention from the authorities. 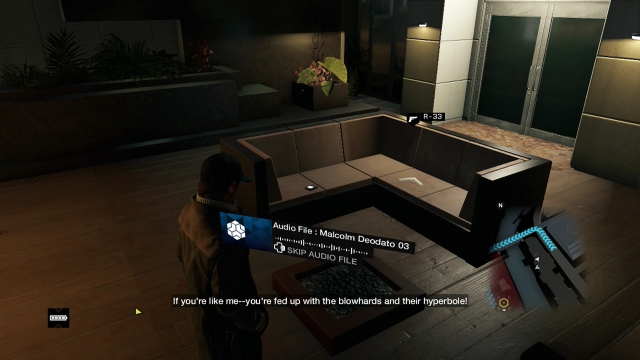 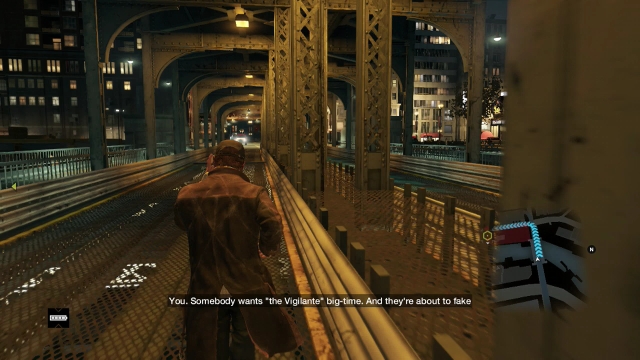 Start by heading right, where you can find an audio file. Listen to it, and also pick up the R-33 gun if you like. It's sitting on a bench. Then head back left and descend along the ledges the way you came. Head forward and then cross the bridge (you can do it on foot, since there's not heavy traffic) and you'll receive your next objective.


You're now near an area overlooking a yard, where there are heavy patrols. You can have some fun by hacking into a camera on the high level, then moving from camera to camera, setting off explosives and such to eliminate men. When you're ready, there's a gate you can enter along the upper level, and you'll receive a warning that you're in a restricted area.

Descend to where the men are patrolling, and sneak along toward your destination. You'll find it on the lower level, and hopefully you can get there without anyone seeing you and raising the alarm. 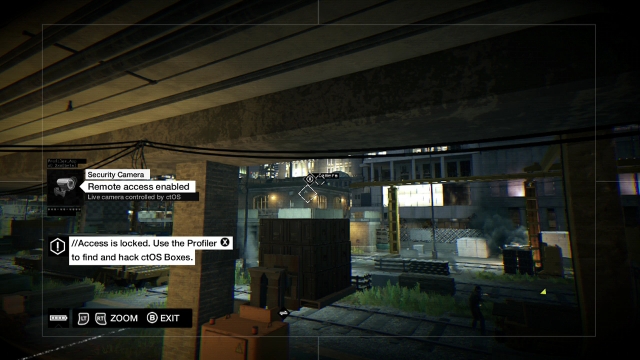 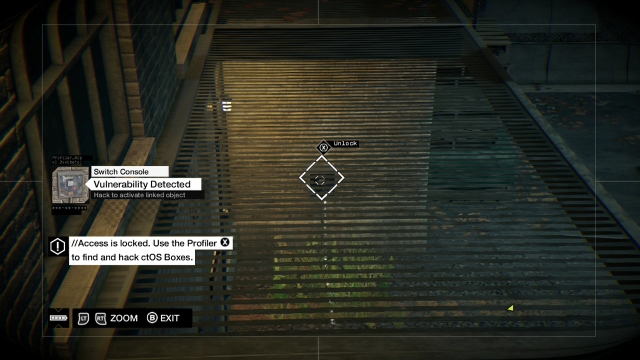 When you get to the door, you'll find that it is locked. You need to look around for a junction box that you can overload. It's easiest to do so by hacking into the camera just above the door you want to enter, then looking left to spot a camera. Travel to that camera and then look down and left through the grate to see the terminal. Hack it and the gate opens. Now head through it as Aiden to initiate a cutscene.

Kill all fixers or escape.


Once the scene concludes, you now need to escape the area. Before you head anywhere, look carefully around the area. You can find grenades and ammo and components and even a P-9mm and an AK-47. Grab them. There also is a hackable System Key on the crate in the fenced area where the boss is lying on the floor. 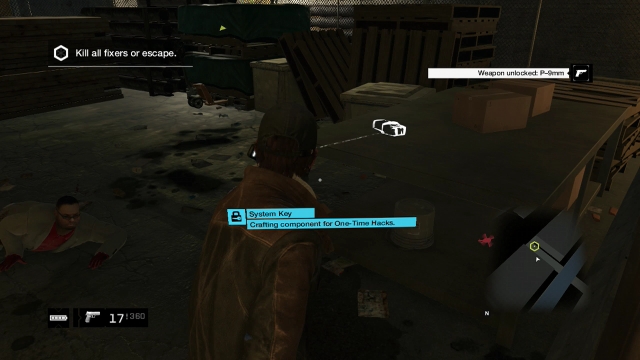 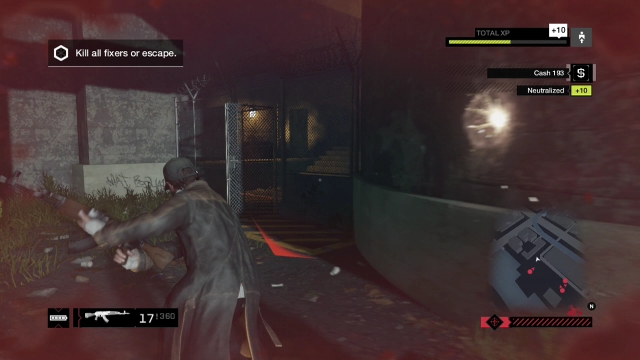 Once you have done everything in that area, you can head outside and find cover while you deal with the enemies that will swarm the area. There are quite a few of them, unfortunately, and also a helicopter circling overhead and bathing the area in light. If you try to gun everyone down while that chopper is doing its thing, you're likely to get swarmed and go down. Though the enemies are worth plenty of experience points if you can tend to them all, this may be a situation where it's better to flee.

The way out of the area is toward the right. You can run along the wall in that direction. Ahead, watch for someone to come running down some stairs. You can see his white outline through the wall as he does. That lets you know where stairs are located. Head to the stairs and run up them, shooting the gunman down as you go. Escape up the stairs and run out into traffic. 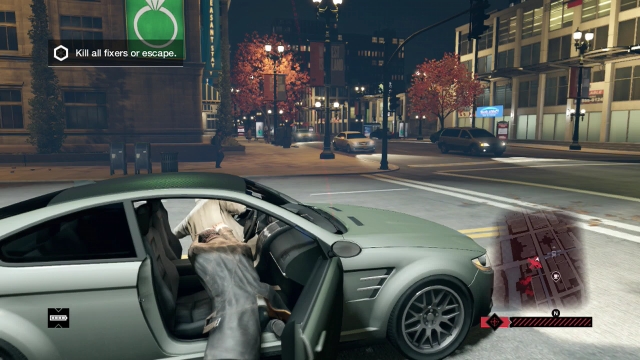 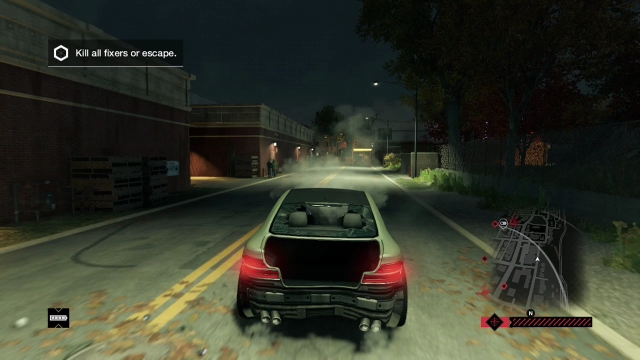 Now you need to get away from some pursuit. The chopper will keep after you, even while you are driving in a car, and other drivers will also be following you in red luxury cars. There are enough of them that you can't really hope to do well in a shootout, so you need to evade them with good driving.

The radius of the area you need to escape is quite wide, but there are a lot of straight stretches along the way. Look for one long stretch after another, and you can leave your pursuit (helicopter included) in the dust. If you try to outmaneuver through winding side streets, they seem to have an easier time keeping on your tail.

Once you finally leave the area, the mission automatically concludes.

NEXT: Act I: A Wrench in the Works