Watch Dogs Guide > Walkthrough > Act I: Thanks for the Tip

First, find the campaign point on the map and set a waypoint if you like. While you're looking for that, you will likely receive a call from Badboy, who suggests that your next target actually wants to be found.


The mission begins in an alleyway, and you need to find the source of the signal you tracked to this location.

If you look down the alleyway, you'll see the point you're supposed to reach. It is high on a ledge, but you can easily climb along vents and such to reach that point and receive your next objective.

Find and activate the ctOS Boxes.


You can see white lines tracing paths that lead away from the box directly ahead of you. One of those lines heads to the left, then up a building. Overhead, you should see a camera. Hack into that camera for a better perspective. 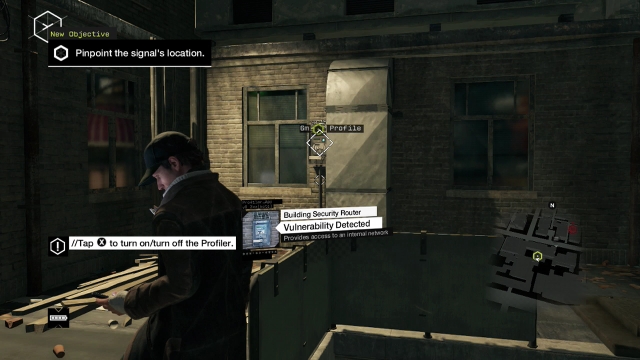 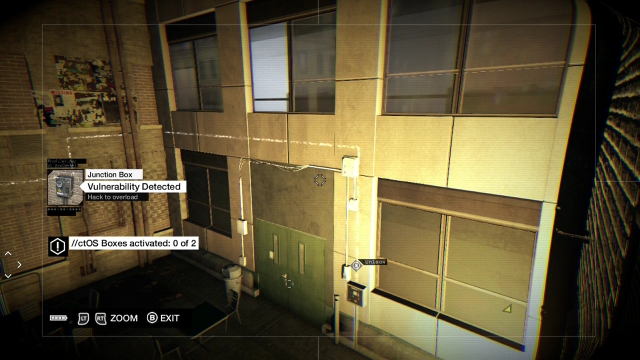 From the camera, look to the lower right and you'll see a switch console that you can hack. That's one of the two. Now, return to Aiden.

Have Aiden head down some stairs, in the direction of an alleyway. The white line along the left wall proceeds along that alleyway. 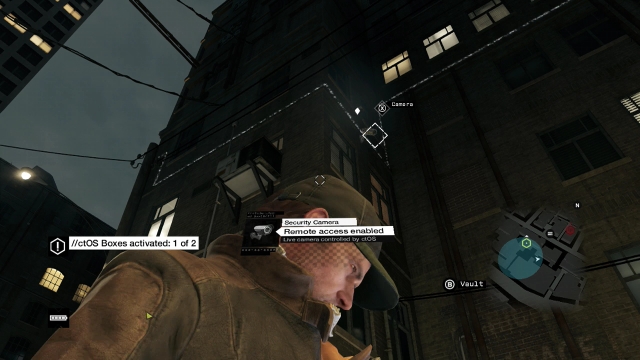 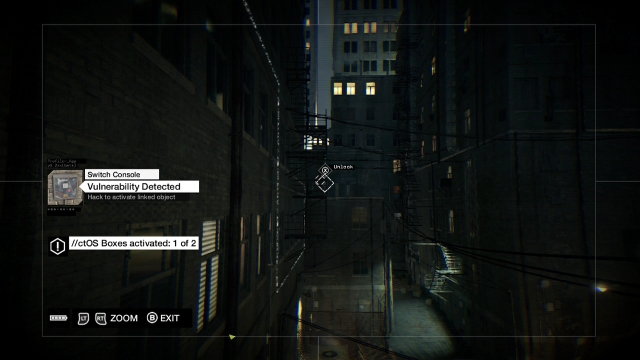 Start down the alley, then look to a high wall to the upper left. There's a camera positioned there that can't otherwise be reached. Have Aiden hack the camera. It looks out toward the end of the alley, through a fire escape to a far ledge where you can press the indicated button to "Unlock" a second switch console. Do it.

Access the building network to reach the signal source.


Now you should head back up the stairs to the console that was connected to the two ctOS boxes you just hacked. It's time to play a hacking mini-game. You know the drill. Turn the middle piece so that it is an upside-down 'T,' the upper left elbow so that it continues the circuit, and the lower right elbow so that it does the same. Then activate the lock panel, and switch the lower left 'T' again so that now it is no longer upside-down. Click on the blue lock that has unlocked now, near the upper right side of the grid. 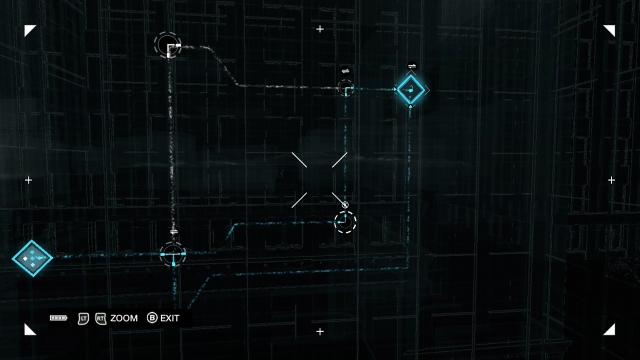 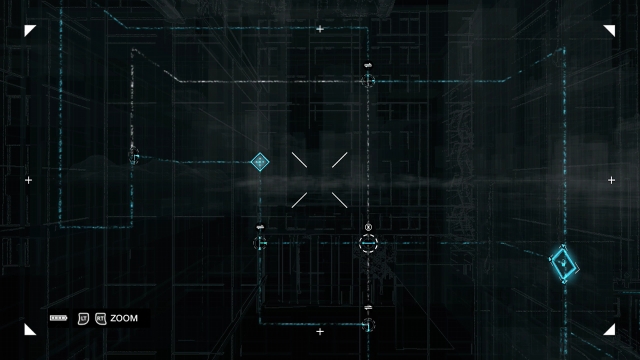 That presents a second puzzle. Here, you need to play around with a few more pieces to direct current. It should just take a moment's worth of fiddling. Then you can unlock the lock tile.


You've gained access to an apartment. Now you need to look around it. There aren't many points of interest here, just a smartphone to the left and a camera to the right. The camera is inside a laptop, so travel there first. Once you do, the phone will ring.


Do as the game suggests and hack the phone, once it starts ringing. A conversation follows and then you have a new objective.

Kill all fixers or escape.


Now you will have to make your way back through the area you just invaded, which admittedly isn't that large. You can either run and hope for the best, or you can produce a bit of bloodshed. I'll assume you're going with the latter option. 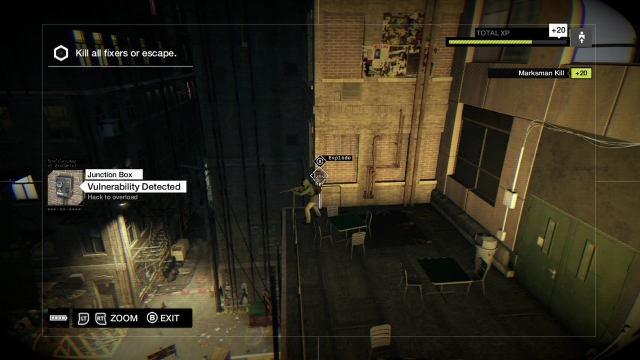 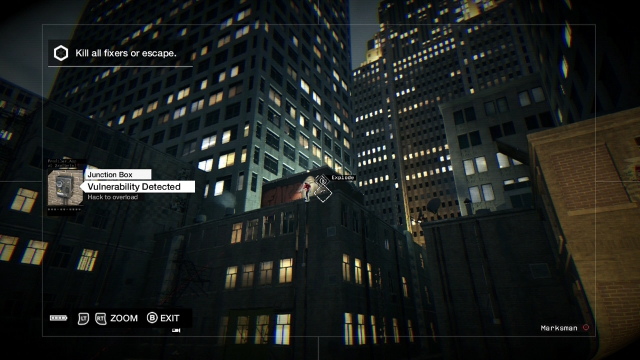 Two snipers will appear on overhead ledges. You can hack into a camera not far away from Aiden, along the wall that is to his right now. From there, it's easy to see a sniper just below and another one on a distant ledge. Both of them are positioned near electrical boxes that you can hack to produce explosions.

Now there is the matter of the gunmen on the ground level. There are more explosive boxes positioned around that area, if you want to go that route (assuming you haven't previously activated them while exploring). You can also run and gun, which is a safer option now that the snipers are out of the picture. 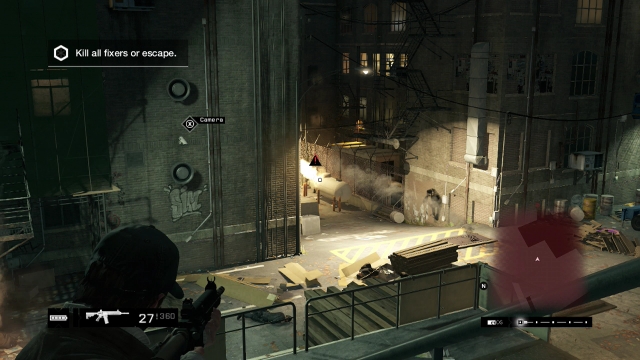 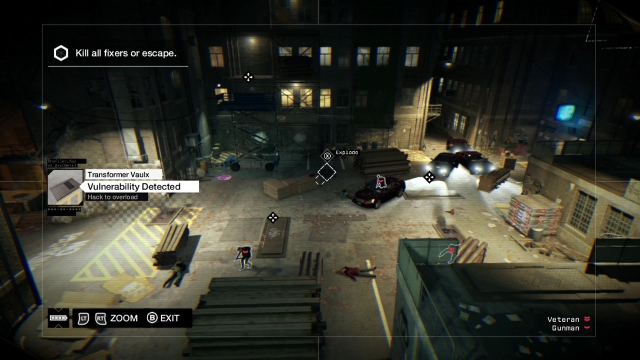 If you do keep at your decision to shoot, note that reinforcements tend to come in from the alleyway where you hacked the second ctOS box, as well as from the alley directly ahead, where cars have pulled up to block your way. You can hit a propane tank in the alley with gunfire to potentially take care of another goon or two.

The surviving new arrivals will fan out as the battle persists. You can find plenty of cover points, however. You'll know when the last of them are down and it's safe to run around in the open because the game will tell you the threat is eliminated.


Now you have a destination in mind, because you have traced Damien's call. You can get in one of the gunmen's cars and drive to the new destination, but first you might as well make things easier on yourself and mark a waypoint.

You'll have to walk the last part of the journey, because your target is in a plaza at the top of some stairs. Once you reach the destination, a scene follows and the mission concludes.

NEXT: Act I: Not the Pizza Guy