Check the Unlockables page for the unlock conditions for each stage. 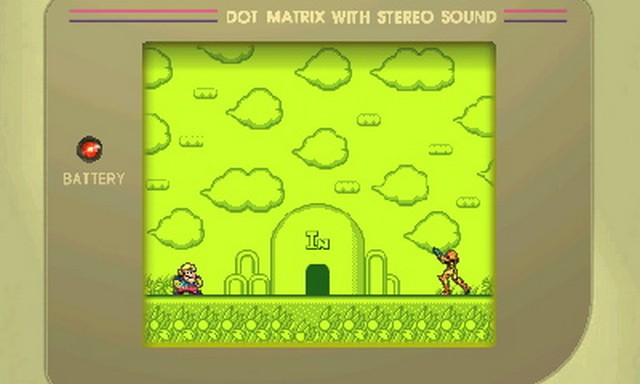 This adorable Game Boy stage takes you through several areas based on sections of the first Kirby's Dream Land. The edge of the stage is beyond the edges of the Game Boy screen. Hold L when selecting this stage to play it with a black and white Game Boy Pocket palette. The stage starts in a scrolling Green Greens and randomly jumps to various scenes from the game's different levels. Each scene has its own set of platforms and/or pits, but they're all straightforward. Nothing else really happens in this stage. 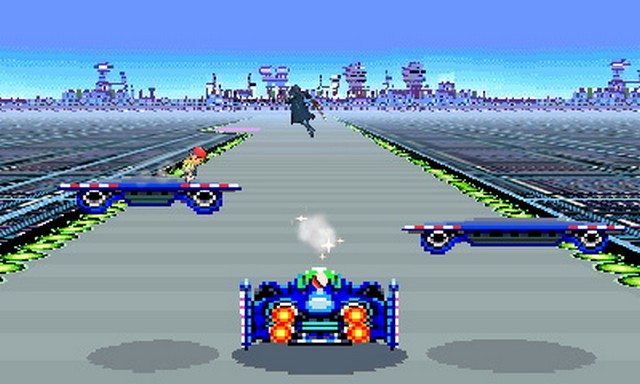 Check out that Mode 7 goodness. This is what 3D racing games used to look like, kids. Race along the classic Mute City racetrack atop Captain Falcon's Blue Falcon and other racing machines. If you hit the track, you'll take damage and bounce upwards. Two floating platforms will remain above the machines, but the machines can come and go. When you see the word "CHECK" appear above a machine, that means it's about to leave the screen for a while, so hop onto another one. 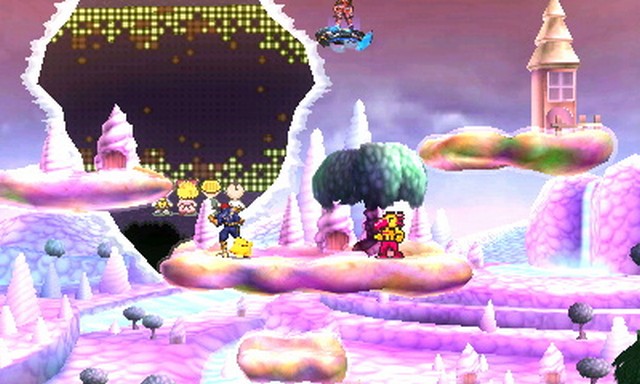 This beautiful stage shows images of Mother and Earthbound in the background. It consists of three main platforms and a smaller oen below, but various things and creatures can appear on and below them, giving you more places to fight. Some of them can be destroyed. Flying Men can appear one at a time, and will help whoever touches them first. They'll stick around and divebomb or kick foes until they're knocked out. Up to five Flying Men can appear in one round. Low level computer enemies might be completely obliterated by these guys. Once they're gone, they're gone until the next time the stage is loaded. 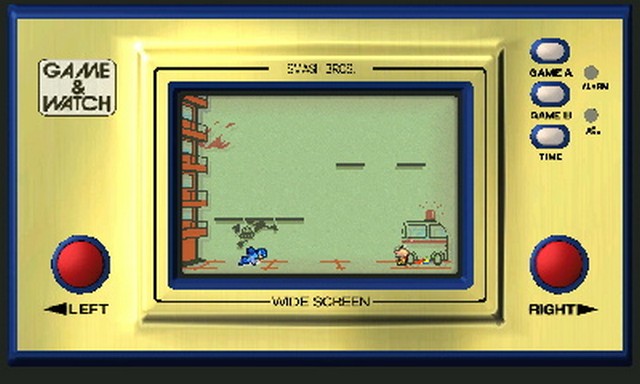 This Brawl stage shifts among various old LCD games Nintendo released before the Game Boy. In Fire, one of the platforms (being held up by an LCD character from Manhole) will shift around the playfield. A pair of firemen with a trampoline will also move around the area, allowing players to bounce from it. In Chef, food falls from above, damaging players if it hits them. The chef himself can be defeated, but this will return the stage to Fire mode. In Lion, you'll be trapped in a cage with two lion tamers that shift up and down between platforms. Touching one of the lion tamers will cause you to be bounced back towards the centre. In Oil Panic, the customers near the bottom of the screen with damage characters who touch them. They'll hop up and attack anyone standing on the lower platform. 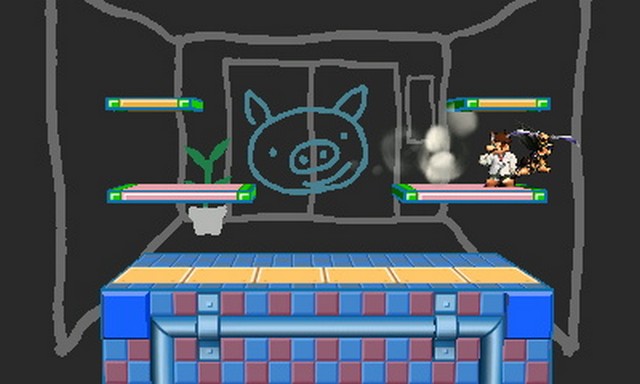 Most of the time, this Brawl stage is four simple platforms suspended above one large one. Regularly, the doors in the background will open and a WarioWare microgame will start. Follow the on screen instruction to win. There can be multiple winners for each microgame, with winners being rewarded. This can mean growing or become invincible. These games can be a pain because you have to stop what you're doing and turn your attention to them or risk being at a disadvantage. Instructions are things like "Chisel" (attack a stone to carve a statue), "Jump" (leap into the air to avoid an earthquake), or "Pop" (attack party poppers to pop them). Microgames only last a few seconds. 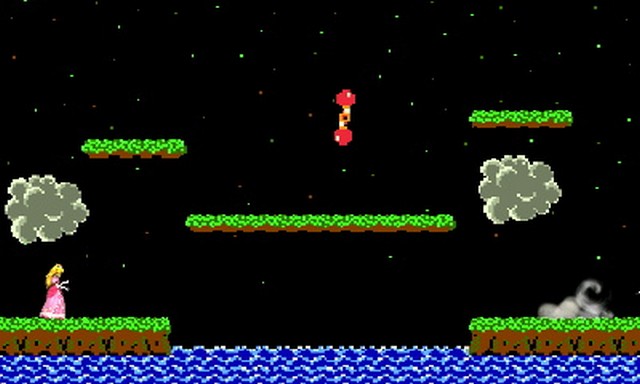 This stage is unique in that it kind of, sort of loops around. If you move all the way to the right or left edge under your own power, you'll end up over on the opposite edge. However, if you get sent flying over the border with an attack, you'll get knocked out like usual. The bumper in the middle of the stage will start spinning if you touch it, knocking you back and damaging you a little bit. If you get too close to the water in the middle of the stage, a giant fish will glomp onto you. Press the buttons and wiggle the circle pad to break free, if you can. Otherwise, he'll drag you down into the depths. If, by some miracle, the fish doesn't get you, it's possible to end up under the solid ground if you're trying to recover underwater, so don't go too far to the left or right. Be aware of your position. Tiny lighting sparks can come out of the clouds and bounce around. Don't let them touch you, or you'll be feeling it. Hold L when selecting this stage to change the colour of the grass. 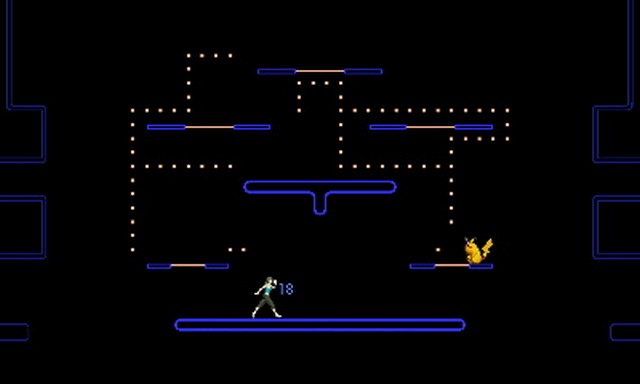 The classic maze from the classic arcade game. The four ghosts from Pac-Man wander around, damaging anyone who touches them. Tiny dots will appear all over the place. Collect 100 and a power pellet will appear just for you. Consume it to make the ghosts vulnerable (so that they can be defeated by touching them), but only to you. Your attack power will go up as well. You can't collect someone else's power pellet, but you can destroy it. Sometimes non-player-specific power pellets will appear and can be collected by anyone. Collecting bonus fruits will give you 20 dots. This stage is very vertical and it can be difficult to finish someone off.