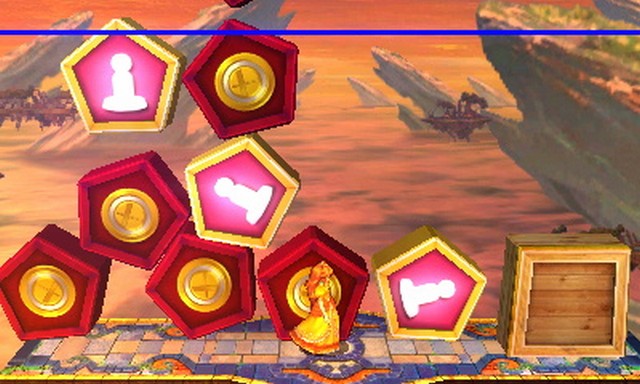 Trophy Rush is the easiest way to get trophies, and the quickest way to get 200 trophies to unlock R.O.B.. There are a few challenges specifically tied to playing Trophy Rush mode, so you'll be spending some time in here if you want to unlock everything.

You pay 6g in advance for each second you spend playing. The minimum is 30 seconds, meaning you'll need at least 180g. It's better to go for the maximum 2 minutes and 30 seconds for 900g, though.

Blocks and boxes will fall from the sky, and destroying them will raise your Fever meter. Once it's full, blocks representing coins, trophies, and custom parts/moves will rain down. Coin blocks are only worth 1 coin each and aren't really worth collecting for that, but if one is destroyed, it will also destroy any collectibles touching it, so they're very useful for setting off chain reactions and collecting several things at once.

Wooden boxes are easily destroyed. Stone blocks take a bit more punishment, but not much. Be careful not to let them pile too high, as this will cause the floor to collapse, dropping everything, including you, out of the stage. If you get KO'd in those mode, you'll lose 15 seconds.

Yellow blocks will greatly increase your Fever meter, so definitely go out of your way to destroy them. Bomb blocks will blow up and damage/destroy everything within a specific radius, and rocket blocks will fire a blast in whatever direction they're facing. These can damage you, but they'll also destroy blocks for you. Blocks destroyed by explosions won't add as much to your fever meter, but they will add a little. Coins, custom parts, and trophies destroyed by explosions will be collected as normal. Any block that falls out of the ring without getting destroyed somehow is wasted, though.

If you stand in one place for too long, an energy ball will fall from the sky. This can damage you, but it can also destroy blocks for you, so it can be as much of a help as a hindrance.

You will likely have an easier time with this mode if you use a character with wide vertical attack range and decent mobility on the ground. Link is a great choice, since his smash, standard side, and dashing attacks are powerful enough to destroy most blocks, and have good vertical range to boot, meaning you can destroy stacks of blocks at a time. If your character of choice has similar capabilities, feel free to use them, too. Link isn't the only option.