If you've been following this guide from the start, then you've saved the toughest of the initial eight stages for last. Make sure you start out with at least the standard 3 lives, and it wouldn't hurt to bring along some spare energy tanks, either. 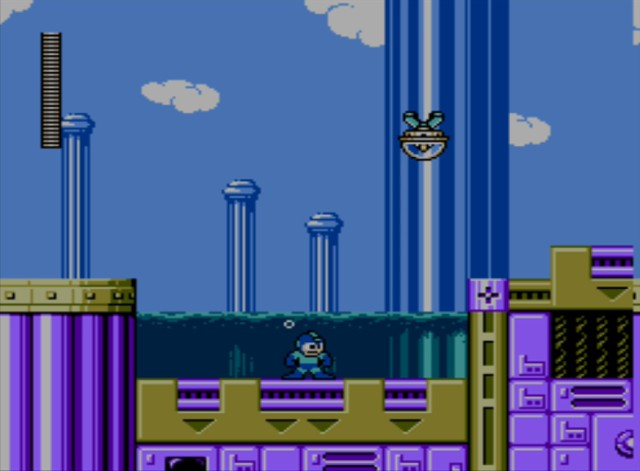 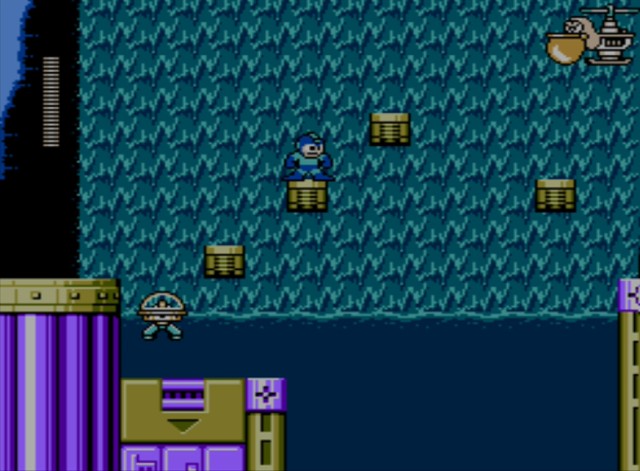 Start toward the right, but keep an eye on the sky. As you near the far right side of the first pool of water, a jellyfish-like robot will rain down from above. It's easy to defeat with a quick blast from the arm cannon, but be on the lookout for more of that particular foe as you continue your advance. If you don't blast them quickly, the jellyfish enemies will sit on the surface of the water, flash for a bit, and then fire a three-way shot.

Continuing onward, you'll also find pelicans. They are straightforward, and will disappear quickly if introduced to charged arm cannon shots. Keep moving, facing the pelicans and the jellyfish and exercising caution near any gaps in the floor. You'll have to hop along a series of blocks in front of a waterfall, and you should try to have a charged shot ready for the pelican you will likely meet soon. Remember that the bird also likes to drop fish that flop about and do you harm, so be ready to avoid or blast those. 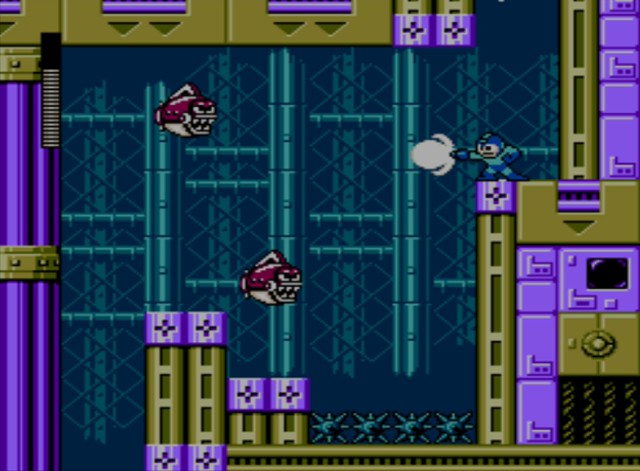 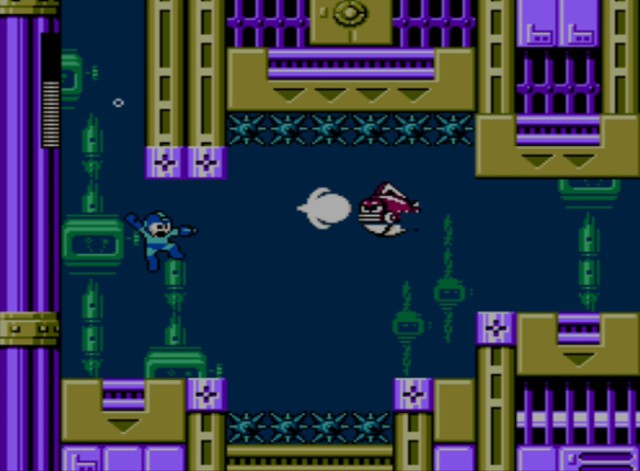 In the next room, there is a cannon on the wall to your right, and a fish swimming. There also are spikes on the floor and ceiling, so you need to defeat the enemies and then make a precise jump to the right so that you jump high enough to clear the lower spike set without bumping into the ones on the ceiling. Remember that your jumping skills while underwater are greatly exaggerated. This can be a tricky jump to make. 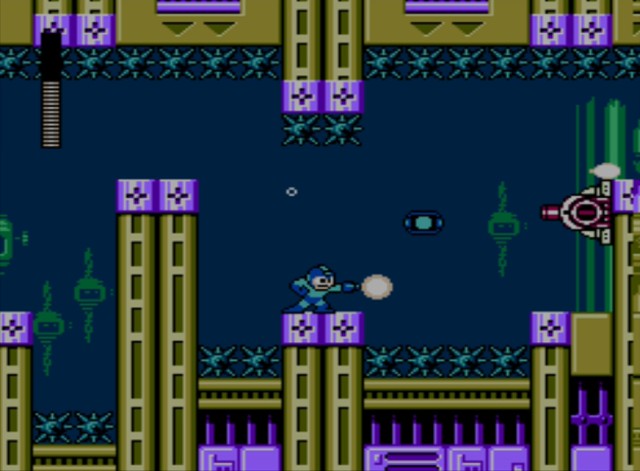 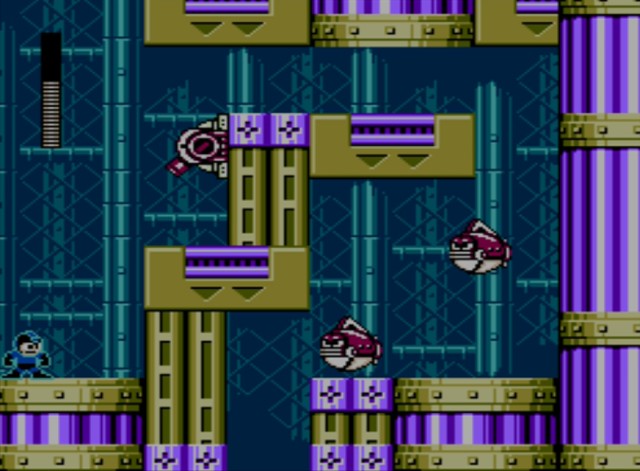 Continue right and eliminate another cannon, and make another careful leap to higher ground. Then it's time to make yet another jump that's almost as tricky as the first one. If you have a lot of energy to spare, you might just want to let the cannon hit you with one of its shots, so you have a quick second to make the leap without worrying so much about the spikes.

When you reach the opposite side of that spike pit, there are a few more fish and then you can advance into the next screen. Here, you should immediately hit the wall cannon with a charged shot or two, then blast the fish through the wall. Finally, head around and drop down through the opening they were guarding. 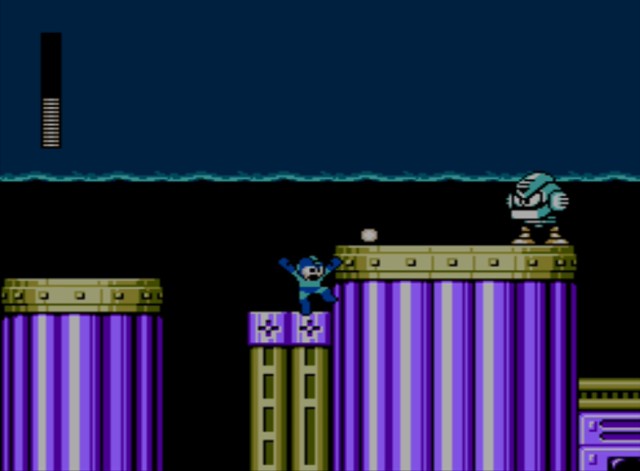 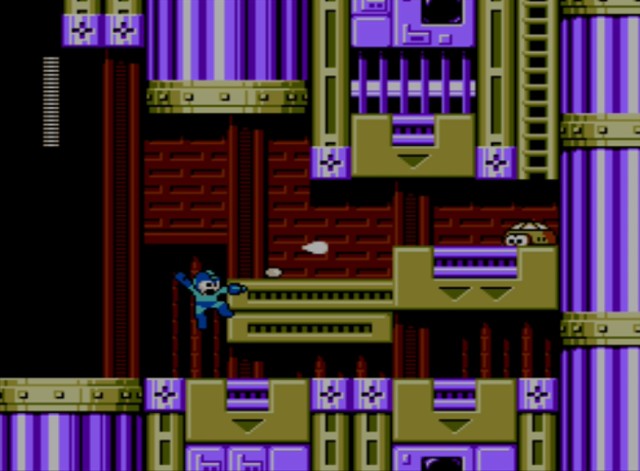 As you advance to the right here, water will drop from above, then recede. When you jump into the water, your leaps will carry you further. Keep in mind its impact on your jumping skills as you proceed. There are a few enemies positioned along these ledges, and they will fire shots that try to knock you into pits. By now, though, you should be adept at dealing with such threats. Just keep pushing toward the right until you reach an extremely wide bed of spikes. Then switch to your jet suit and fly across.

Note: if you don't have the jet suit, you'll have to make a leap aided by the inverted water. Watch for the blue to come down from the screen until it reaches its lowest point, and then make a long jump. If you timed it right, the water will carry you over the hazard.

Once you land on the other side, fly to the right over the next waiting foe, so that you reach the next screen. Here, you can slide through a gap and collect an energy capsule, if needed. The enemies on the upper ledge that leads to the ladder need to be hit with charged shots. Then the path will be clear and you can climb into the next chamber. 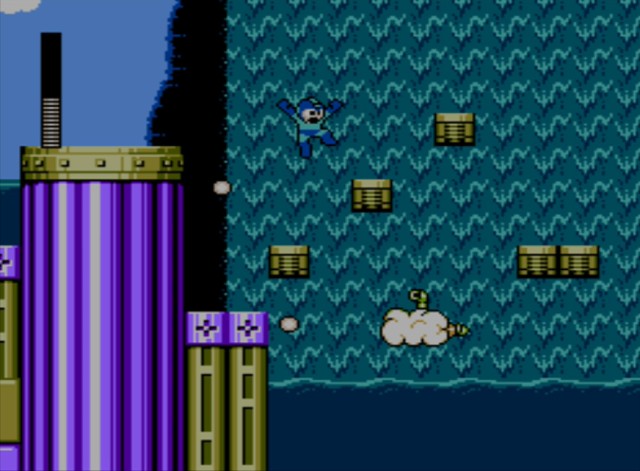 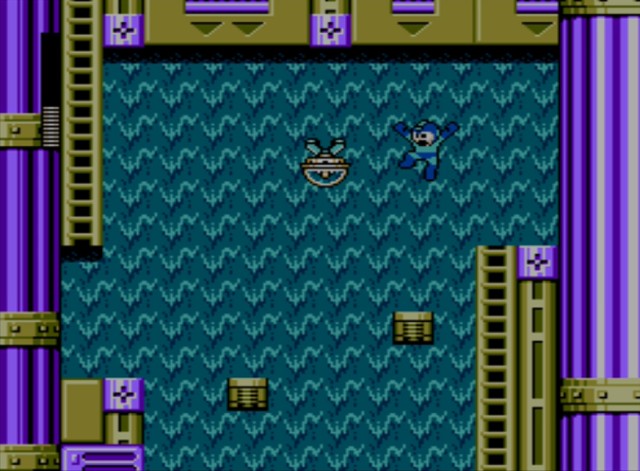 Fliptop greets you as you enter this room, so accept whatever gift he has in mind, then climb another ladder.

You now should ascend a staircase of sorts, which looks out over a wide pool. The enemies here look like submarines, partially obscured by clouds. Shoot them to eliminate the clouds, and shoot them again to kill them. Proceed carefully here, because the floor is lined with a spike patch. Past the first group of subs, there's a larger group that you'll have to deal with as you ascend along a series of blocks. You may want to switch to your jet suit near the end, to fly over some of your threats. Then you can climb a ladder.

Cross the next chamber cautiously. It looks simple enough, but more of the jellyfish-like enemies will fall from above as you advance. Let them drop before you make any long leaps. Then climb the ladder into the next chamber. 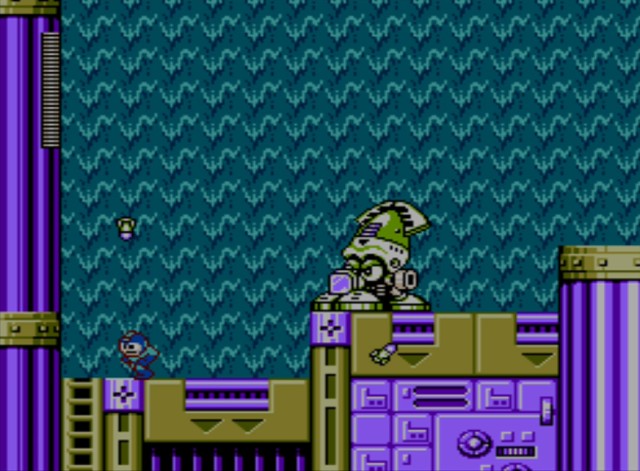 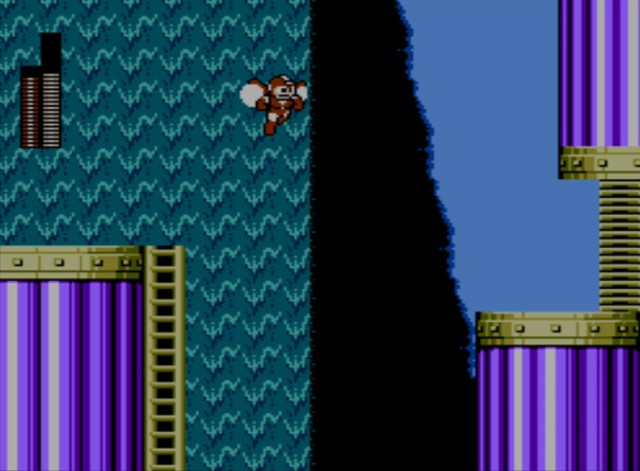 Here, you'll deal with one of the squid-shaped enemies that you've encountered elsewhere. Hopefully, your life meter is in decent shape. It fires blocks and homing missiles, as you may recall, and both can damage you. Blast them out of your way and hit the robot in the face with a barrage of bullets, then proceed.

In the next screen, you'll see a ladder leading down to the next screen and a ledge positioned to the far right. You want to reach that ledge, so switch to your jet suit and fly across the gap. Then pass through the door to face the area boss.


The Knight C. is your weapon of choice in this encounter. It will help you to make quick work of the otherwise dangerous robot master. 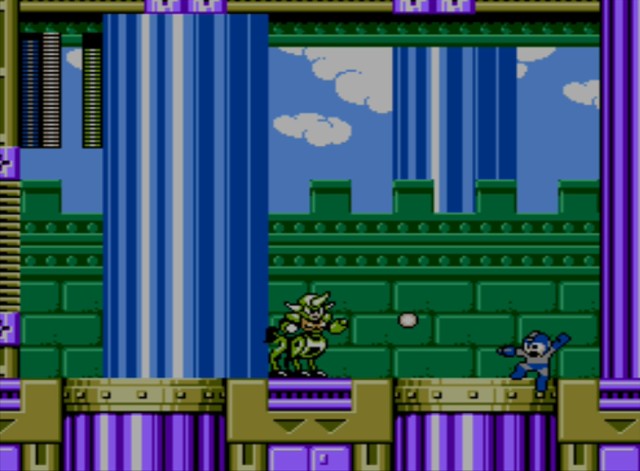 Centaur Man, unlike most robot masters, doesn't jump. He simply trots toward you, or vanishes in a flash and reappears. If you see him wink out of sight, that's your clue that he'll shortly materialize near the opposite side of the screen. If that's where you're standing, make sure to slide out of the way.

Often, after teleporting, Centaur Man will use his ability to freeze time. Then he'll send a shot your way, which passes harmlessly overhead. Then it collides with a wall and bursts apart as spread shot shrapnel. You will usually be okay if you're closer to the center of the screen, but if you're frozen in place near a wall, you're almost certain to take damage. So mostly, you should hang out near the center of the battle, and slide to either side as necessary while charging shots or hitting him with your Knight C. attacks. Those will actually help you defeat your foe in a hurry, so hopefully you brought that weapon along.