It's time to get medieval on Mega Man's enemies. Or rather, it's time for them to get medieval on him. This is a colorful, interesting stage, but also quite dangerous. You'll need to keep your wits about you in order to reach the end in good condition. 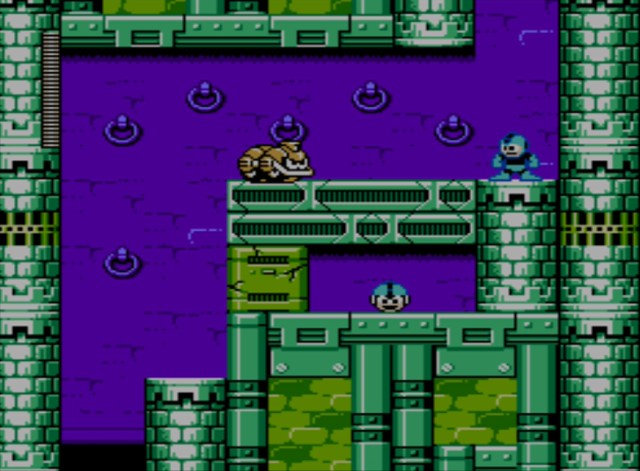 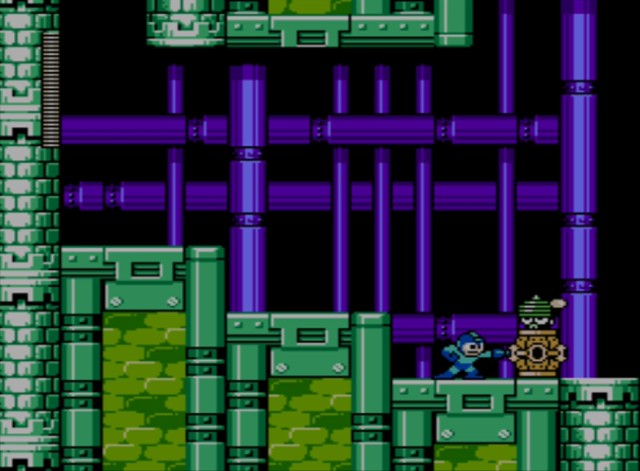 Drop through the opening just to your right, and be ready for a fight as you land near the top of the screen. A caterpillar-shaped enemy is rolling toward you from the left. He'll easily die if you hit him with a charged shot. Then you can use your power suit to break the green block apart and collect a 1-up icon before dropping to the next screen.

Here, you'll see a new sort of enemy. It looks about like an orange barrel, and it spouts bullets in a quick arc that makes it difficult to approach. Get close somehow, though, and pelt its side with some shots to make the barrel's inhabitant emerge. Then hit it in the face with a few quick shots to defeat your adversary. Now you're good to continue your advance. 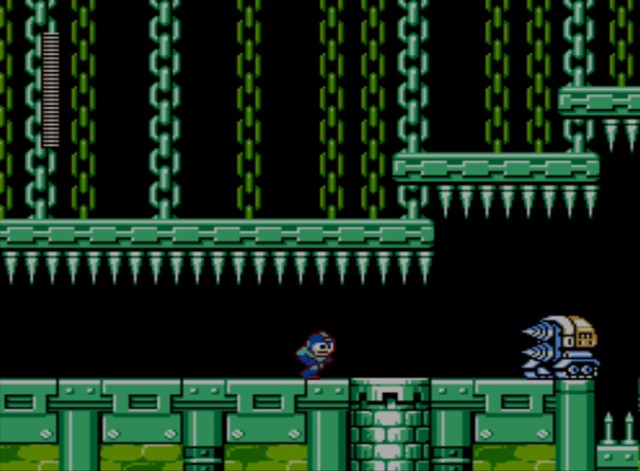 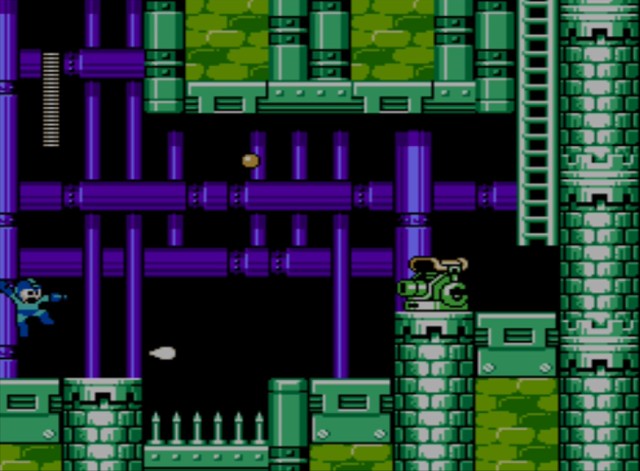 As you enter the next screen, a mobile drill rushes your way. Hit it with a few shots to dispose of it, but note the spiked ceiling that repeatedly drops toward the floor, before temporarily retreating. You'll need to advance along this dangerous series of ledges, blasting drills as you go. There's no time to delay, and you need to time your rushes carefully, so that you start forward just as the treacherous spikes start to rise. You'll have to reach a dip in the floor along the way, and then blast two more drills. Don't stop moving, though, even if it means you'll brush against the enemies. In fact, if you were moving slowly up to that point, brushing against the last of the drills may save you from taking fatal damage from the spikes, since you have a moment of invulnerability.

Past that tricky ceiling, you'll need to jump over a spiked pit and then keep going. You'll next come to a room with a shielded cannon. You should power up your arm cannon and wait until it lifts its shield so that it can fire at you. That's your chance to hit it with a charged shot. Repeat the process until the cannon is done for, then hop across the spike-lined pit and climb the ladder to reach the next chamber. 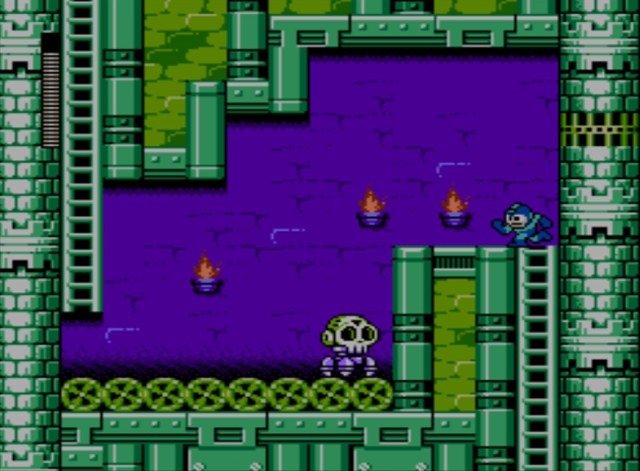 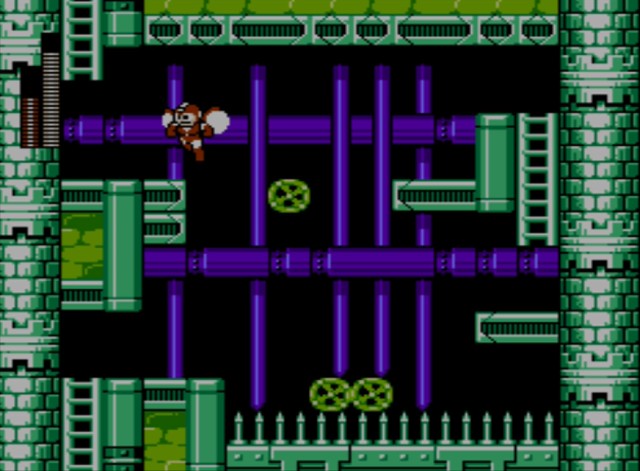 In this room, you'll see gears along the floor, and one of the bouncing skull enemies like you can also encounter in Yamato Man's stage. It will approach you quickly, so hit it with charged shots at the peak of its jump, which you can safely do while still positioned on the ladder. Then climb the ladder along the room's left side.

The next chamber contains more gears along the lower level, positioned over a wide bed of spikes. If you're feeling daring, you can jump to them and then climb along the room's right side before hopping back toward the left, but there's no practical benefit to that approach. It works just as well to equip the jet suit and fly to the ledge just above you. Either way, you should reach the ladder that leads to the next room. 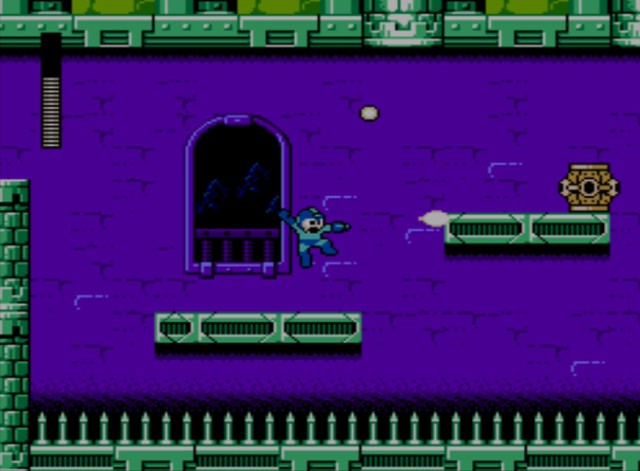 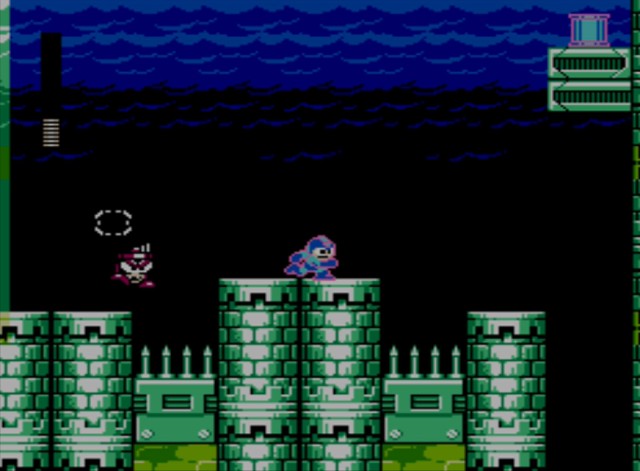 As you head to the right here, you'll eventually face another of the orange enemies that resembles a barrel. Defeat it in the usual manner, then defeat three more such enemies while advancing along ledges. The floor is lined with spikes, but you may survive a fall if you are briefly invulnerable from taking damage. A better strategy is to simply avoid getting knocked anywhere.

Climb the ladder that you find on the room's far right side, which leads to a small room where Fliptop will greet you. Grab the treat he tosses, then climb another ladder and start toward the right in the next area. You'll find spike-lined pits here, and some enemies that approach slowly. When you shoot them, they'll rush you, so be ready for that and hit them with a few more shots. To the upper right, there's a high ledge you can fly to in order to acquire an E-tank. Then you should drop through the available opening. 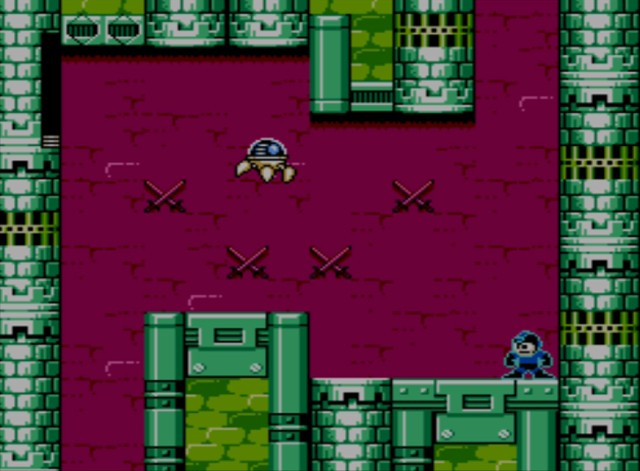 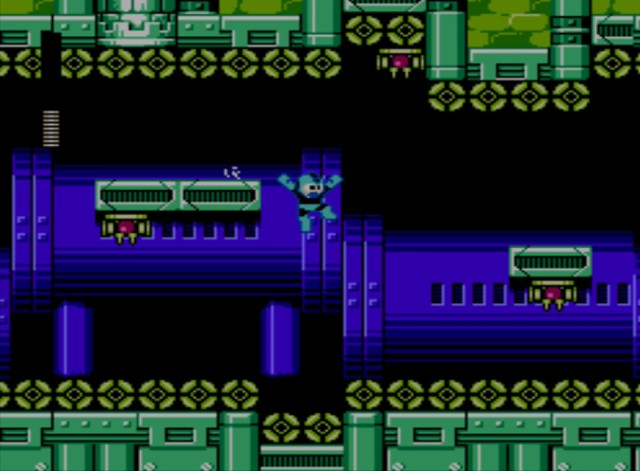 Now you are in a simple room. An enemy is crawling along the ceiling to the upper left, and it will drop to about your level as it gets closer. Let it drop and fall, then hit it with a charged shot. Next, drop through the opening on the room's left side.

You will arrive in a tricky area. The circular items along the floor and ceiling are springs that will send you bouncing about with little chance of controlling your direction. Considering the enemies in the area, that can prove quite dangerous. Play it safe and use your jet suit to give yourself some added control. Travel from ledge to ledge and you should get through quite easily. 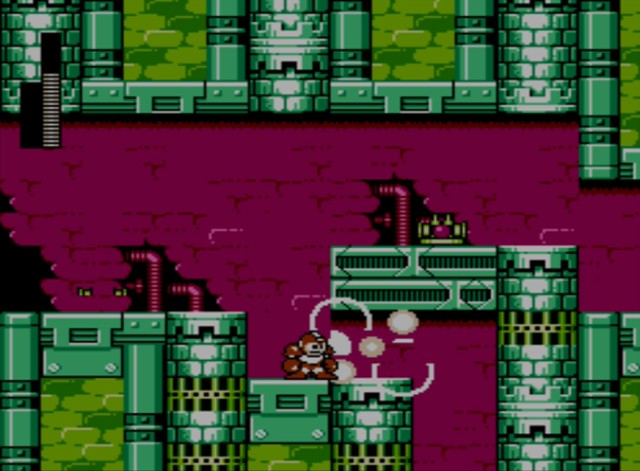 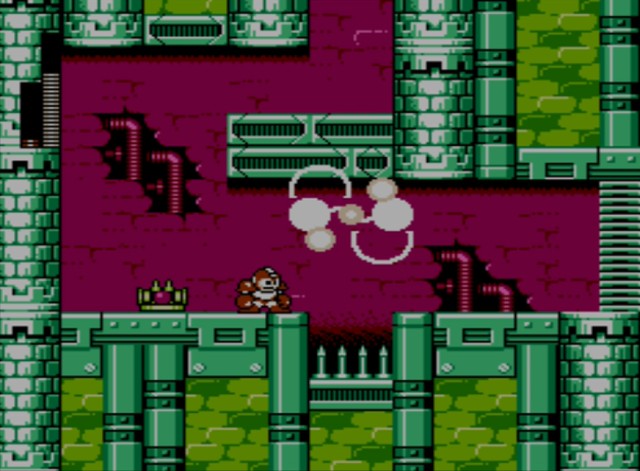 On the far side of the spring-loaded area, look for a green block, near where some enemies are crawling along the ceiling. Switch to the power suit and destroy that block, then drop through the opening.


The Yamato S. will make this fight a snap, so make sure you equip it if you have it. 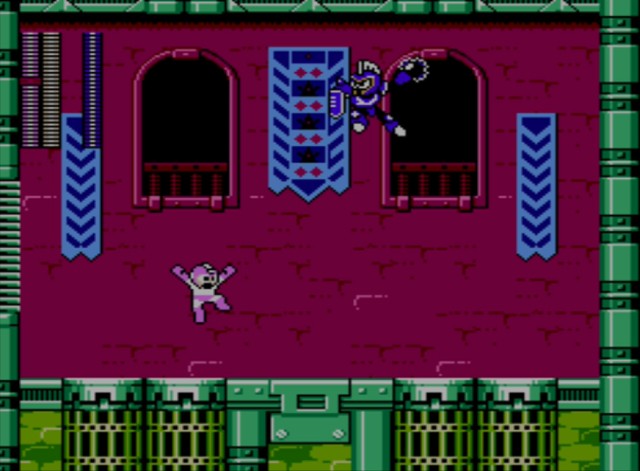 Knight Man starts by making a small hop toward you. Depending on how you move in that opening moment, he will then hesitate for a second before swinging his mace. The ball flies out toward you and then pauses when it reaches the end of the swing, before returning to its owner.

The mace can hit you both coming and going, or even if you're near a wall and jump straight up to avoid it and don't move out of the way. It's a fairly effective weapon, actually, except that it doesn't do much damage. That's true especially compared to your spear, which can hit Knight Man for some hefty damage. Make sure that you hit him, then wait for a second for him to recover, then hit him again while you continue avoiding his basic attacks. Do that a few times and you should put him to bed without any need for an energy tank.