Yamato Man's stage has several forks in the road, but you can follow the path prescribed to reach the "true" boss. It's an occasionally dangerous route, but also reasonably short. 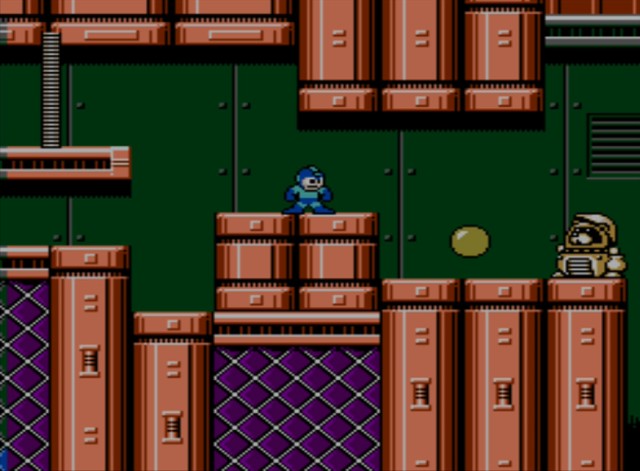 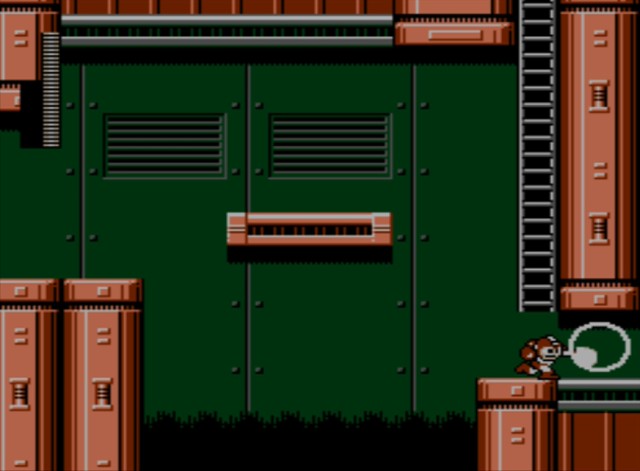 The first enemies you'll encounter in this stage, as you head toward the right, resemble tanooki creatures. They send bouncing balls your way, but you can easily blast away both the balls and their source. Do that as you continue advancing, where you'll soon come across the first pit. Start toward it slowly, and the enemy on the next ledge will become visible. That way, you can safely dispatch him without having to negotiate a jump at the same time.

On the far side of that pit, you'll see a weak point in the wall, near its base. Use the power suit and blast away that opening, then pass into the next room. 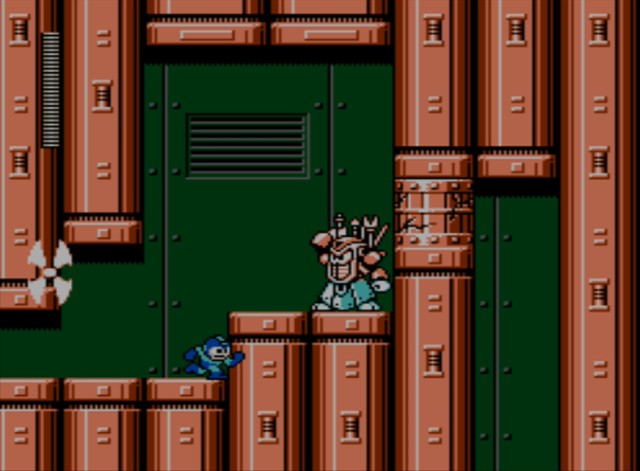 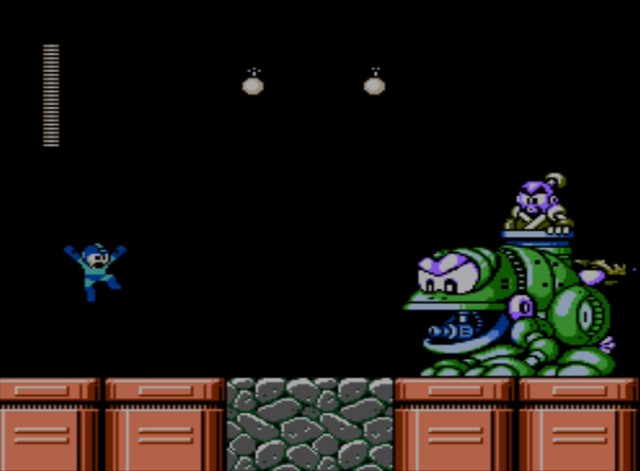 Here, there's a spear-wielding enemy standing on a ledge. He is invulnerable while the whirling spear shields him, but when he tosses it, you can nail him with a charged shots. Repeat that process as often as needed, until you defeat him, then destroy the wall that he was guarding with your power suit and drop through the opening.

The next room contains an energy capsule. Grab it if you need it, and then keep going. To the right, you'll come across a mini-boss. This is a frog tank. It fires lasers straight ahead, and the robot riding in the hatch will also toss a couple of bombs at a time, in an arc that can reach you wherever you're standing. Be ready to slide under those, and when you see an opening, jump and release a charged shot at eye level. You'll have to hit the main robot's eyes a few times with charged shots to finally put it out of commission. 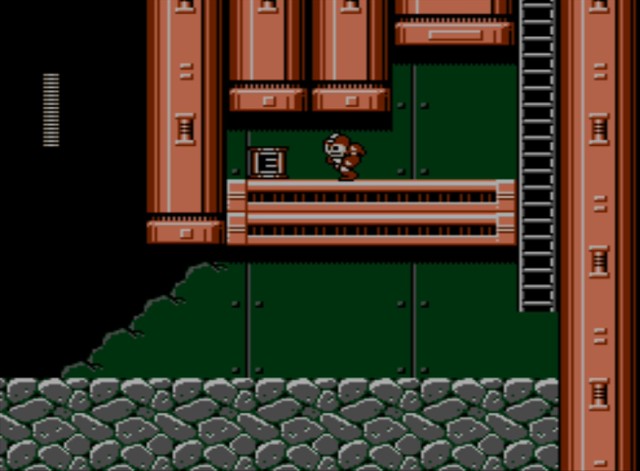 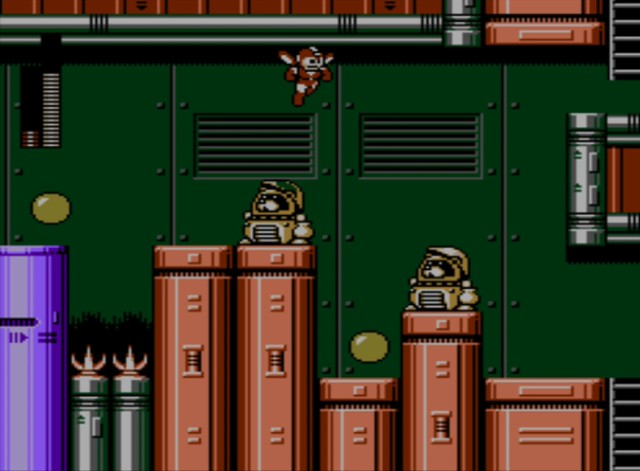 In the next screen, climb the ladder and then take a detour to the left. With your power suit, destroy the block and collect the E-tank, then climb again to reach the overhead chamber.

The next room really has no points of interest, so just continue through it and to the right, where you'll need to slide through a gap to proceed. Ahead, there are columns with spikes between them, so advance cautiously. You may want to use your jet suit, just to negotiate the spikes more easily. Then defeat more of the tanooki enemies and use the ladder on the room's upper right side. 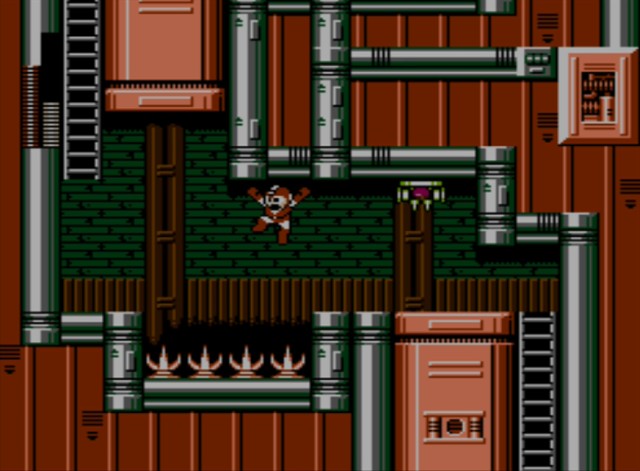 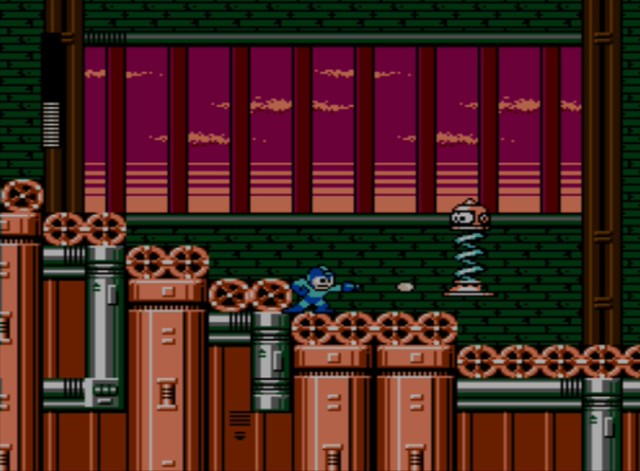 Here, there are more spikes, so you'll definitely want to use your jet suit to cross them. Make sure that you start your attempt as the sliding enemy on the ceiling is started toward the right, so you don't accidentally bump it and trigger a disaster.

Climb the ladder into the overhead area, where you'll find another of the spear-wielding robots. You can easily defeat him by climbing near the top of the ladder, then jumping up and firing a shot after the spear passes overhead. Repeat as needed, and soon the robot will be toast. Then you can use your jet suit to fly to the upper right. Head along the wheels, defeating the few spring-like robots you encounter, and you'll soon reach the door that leads to the area boss.


Silver T. will be your best friend in this fight, since it takes away a reasonably large slice of Yamato Man's health meter each time it connects. 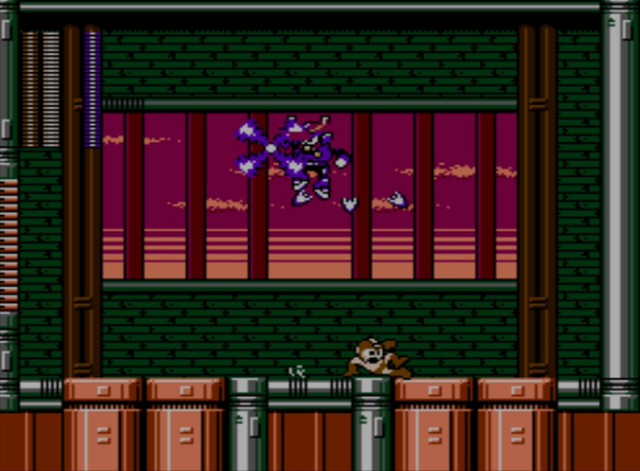 As the battle begins, Yamato Man will leap toward you, at decent elevation. He pauses in the air and fires a three-way shot, which is reasonably easy to avoid but could still catch you by surprise. Then he lands and, depending on your location, tries to bump into you while collecting his thrown projectile.

Be ready for that, and hit him with the tomahawk or charged blaster shots. Then look forward to the process repeating a few times. Yamato Man doesn't necessarily jump a lot, but he also doesn't linger on the ground level unless he thinks he can rush and ram against you. The good news is that if you keep hitting him with shots while managing basic evasive maneuvers, he shouldn't last long enough to pose a serious threat.