This stage is unique in the game, in that there are multiple routes through it and you need to take both of them--on separate runs--if you want to acquire every available upgrade. 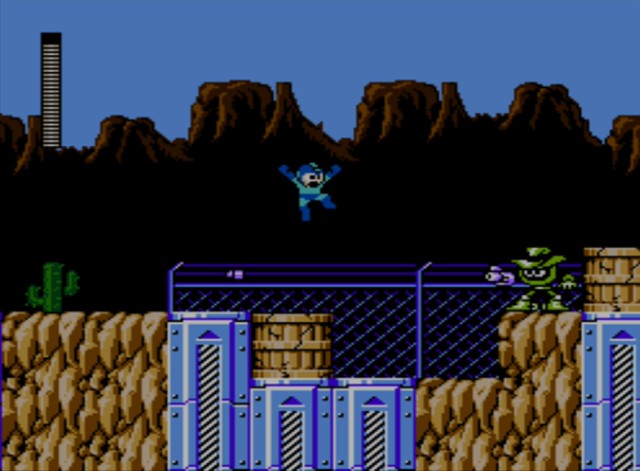 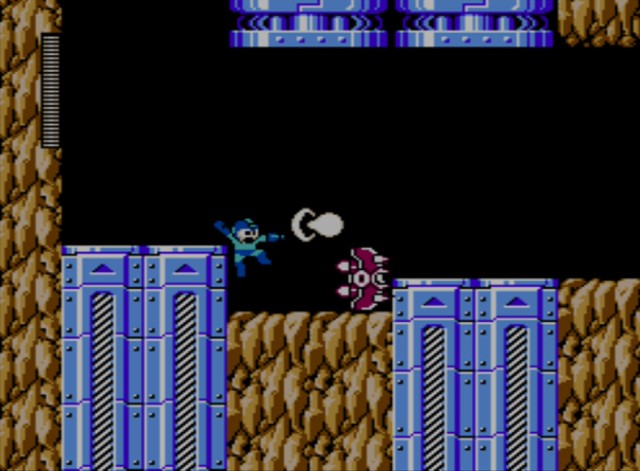 From the entrance, head to the right and use charged arm cannon shots to take out a few enemies that are positioned along the ledges. They shouldn't pose a serious threat. After defeating the third robot, hold to the left wall as you drop into an opening, to avoid any risk of accidentally brushing against fatal spikes.

In the room below, you'll find another of the same type of robot, and he again should fall quite easily. Defeat him and drop into the next room, where you'll see an armored enemy cruising back and forth within a rather confined space. He's only vulnerable when you shoot him in the back, as you might recall, but you're actually better just leaping over him and avoiding the issue, given the cramped quarters. 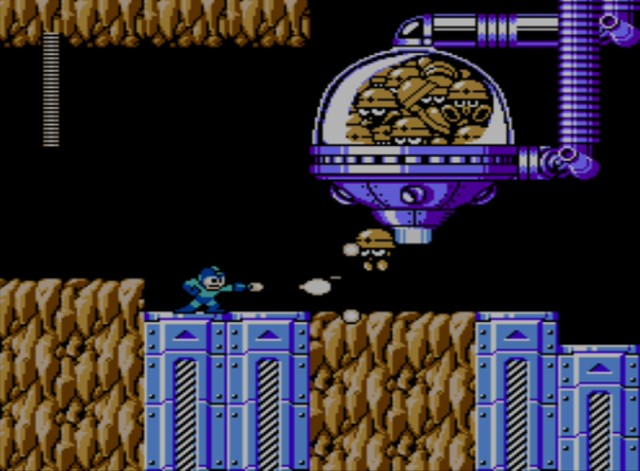 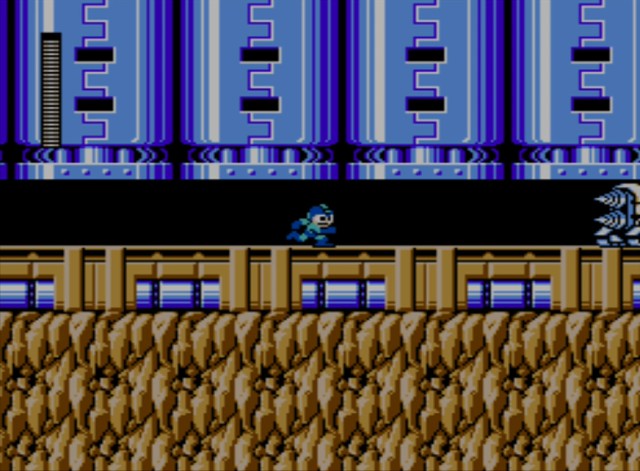 Keep moving and you'll next face a mini-boss. This machine hangs from the ceiling and contains an endless supply of the hardhat enemies. Though the threat is stationary, Mega Man is unable to simply slide past it and keep going, so you'll have to stay and fight. One standard hardhat will drop out at a time, from a tube, and the only vulnerable part of the dispensing machine is its purple base. Stay on the ledge to the left and hit it with charged shots, or hop lightly and fire a bunch of standard shots. As you do that, you'll occasionally have to deal with approaching hardhats, but they won't do a lot of damage even if they manage to hit you.

Once the dispenser is gone, keep moving and you'll come to a tunnel with a low ceiling. Start along the tunnel, and keep mashing the fire button to send out a regular series of arm cannon pellets. As you advance, you'll easily destroy a couple of mobile drills. Then you can destroy some hardhats and climb a ladder to meet with Fliptop. Accept whatever he gives you, then climb another ladder to reach the overhead area. 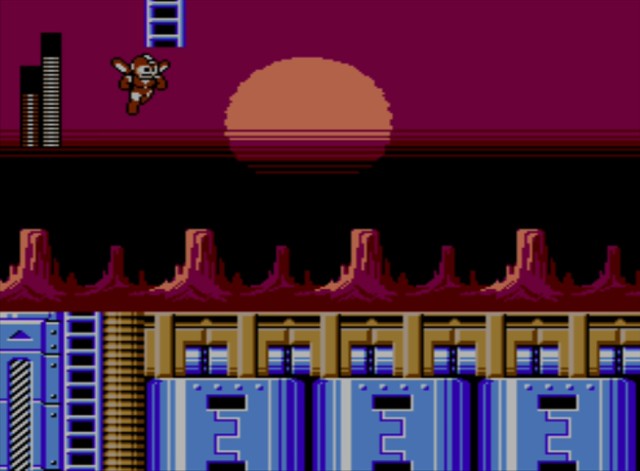 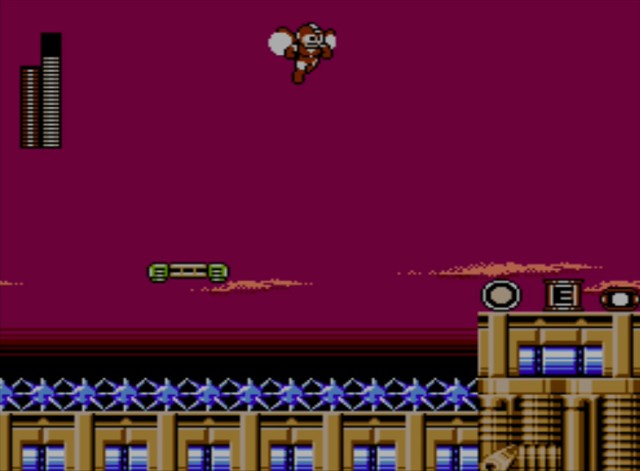 You will see a sunset in the background, and a high ladder waits above. Switch to your jet suit and fly up to it, then climb into the next room. Keep climbing until you arrive at the top of the ladder, then start to the right.

This area looks very dangerous indeed, but it's not difficult if you take things at a safe pace. You are looking out over a lengthy field of spikes, and you need to proceed along a few moving platforms to reach the far side of that field unscathed. The best thing to keep in mind is that you should always launch forward when the next platform is at its lowest point and when your current location is at its peak (if it moves at all), to give yourself a more generous margin for error. Your jet suit will easily carry you from one ledge to another, even in the one case when you have to make a leap of faith because your destination platform isn't yet visible, so don't stress. On the far side, you will find an energy capsule and an E-tank, and then you can drop through an opening. 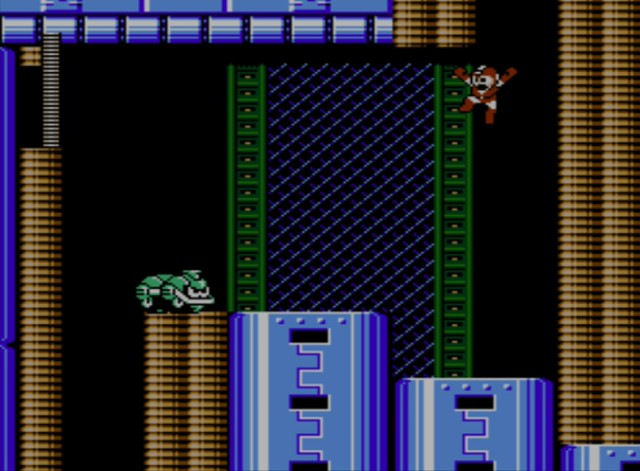 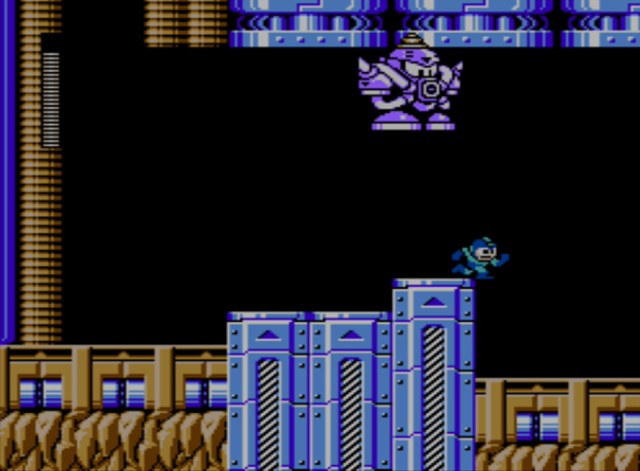 As you fall through that opening, you will notice another opening to the left. Don't worry about that; it is where you would have arrived if you went right from the screen where you saw the sunset. Just keep falling into the next screen, where a caterpillar-shaped enemy will rush you. Take it out with a charged shot or three quick blasts, then drop through yet another opening.

As you head right here, you'll face first one of the large robots that likes to try to crush you from above (I like to just slide past these guys whenever I encounter them) and then you'll come to another of the dispenser machines. This time, the high ground is along the screen's right side, so your first order of business should be to cross to that location. Then you can face left and more conveniently eliminate the dispenser. 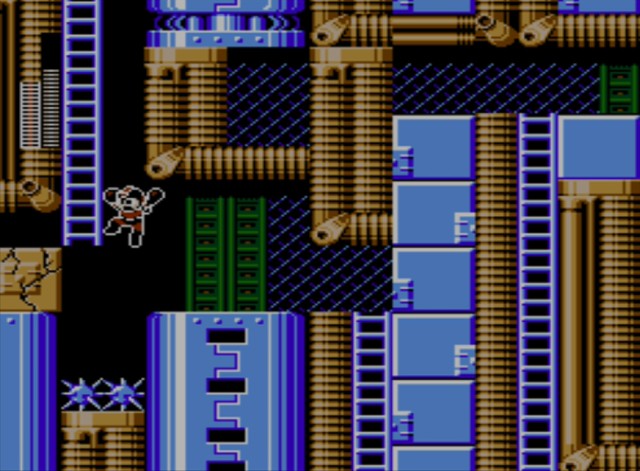 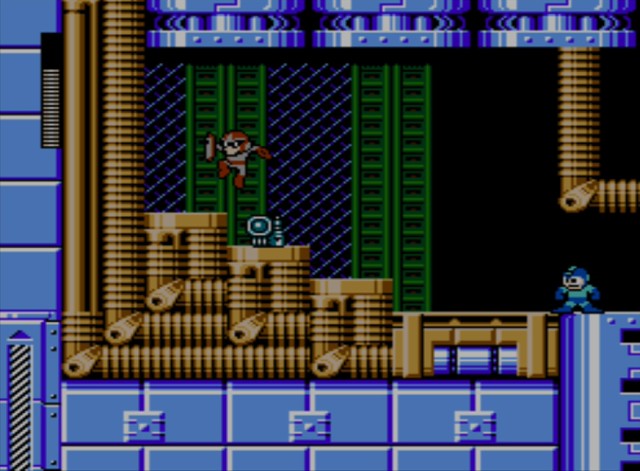 Continuing onward from there, you'll next arrive at the branching paths I mentioned. A faintly orange ledge runs the length of the screen and more. I suggest taking the upper path first, where you will encounter weak resistance in the form of some cannons mounted along the ceiling. Blast them and then climb a ladder that leads to the next room.

Here, you should notice a weak block along the left side of the screen, above a bed of spikes. You need to switch to your power suit and stand on the very edge of the ledge, just to the right of that bed of spikes. Fire a charged blast from there and you can destroy the weak wall. Then you can hop through it to meet with Protoman, in his only appearance in this particular game. He will give you a special item that balances your weapon energy. 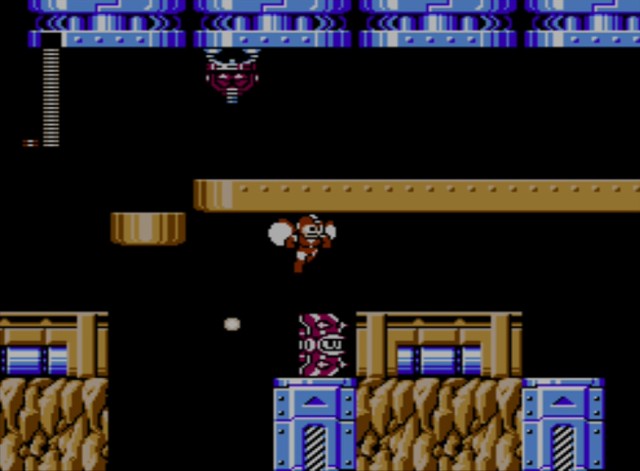 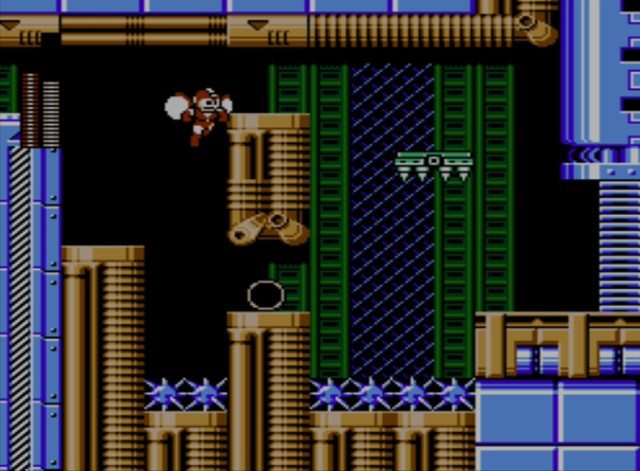 Next, you can advance through one more rather easy room (just avoid the spikes and hit the flying and bouncing enemies with charged shots) and take on the boss. However, defeating the boss you find in that chamber won't net you the full potential reward, because he's actually a clone. You'll still get his special weapon if you win, but not the letter B that goes toward obtaining Beat. Therefore, I recommend dying on purpose and playing through the level again, until you reach the branch in the path.

This time, follow the lower route. You'll need to be careful, because there are a number of pits and some of those armored enemies flying back and forth. Advance cautiously, and don't let any of the enemies that are crawling along the ceiling hit you with shots.

The next chamber you find is your final test ahead of the "true" boss chamber. It's not much of a challenge at all, actually. You can collect energy safely by using the jet ability, if you want, or just take the high road and avoid the risk posed by the spiked floor. In any event, you shouldn't have much trouble reaching the gate that leads to the desired showdown.


If you have it, you'll want to use the Plant B. attack to face off against Tomahawk Man, who otherwise can take quite a bit of damage before collapsing. 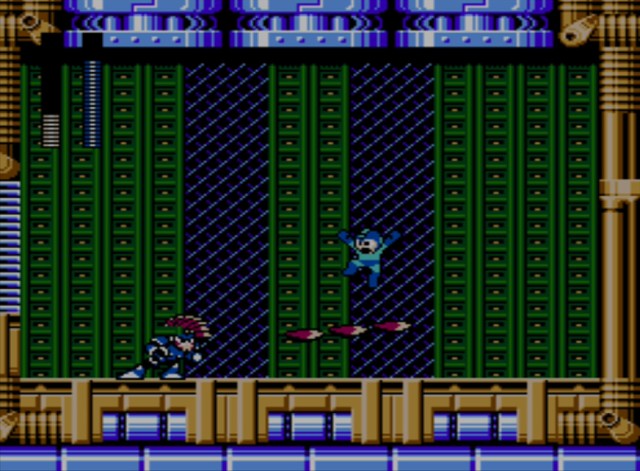 As the fight begins, Tomahawk Man likes to take a mid-sized hop toward you, so be ready for that and either stay mostly to the left, or run to the right and slide under him. Once your foe lands, he'll toss some projectiles your way. He has two types of attack: a rapid burst of three shots, or the tomahawk from which he derives his name. The second of those is actually the easier of the two to avoid.

Unlike a lot of robot masters, Tomahawk Man may decide to send out two or three rounds of fire before jumping around again. It mostly seems to depend how close you are to him, since he prefers to brush against you and cause heavier damage when possible. Try to keep at a distance and be ready to avoid his attacks while you counter with your own shots. Slide out of the way if he gets too close and you should do just fine.