This stage begins with a view of a 1-up icon, which you should probably just ignore. You can't get it without risking damage, and extra lives aren't necessarily what you even need right now. 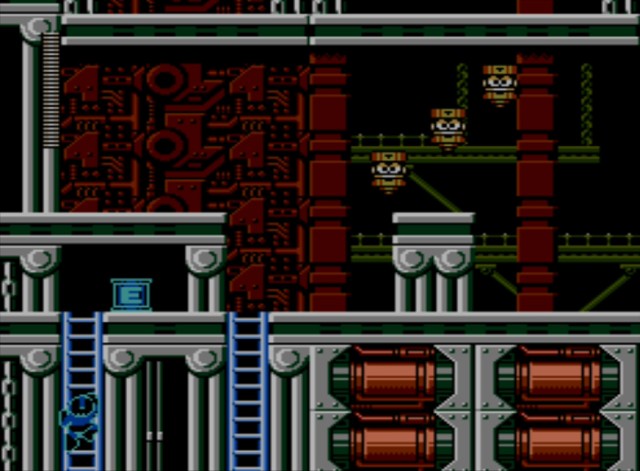 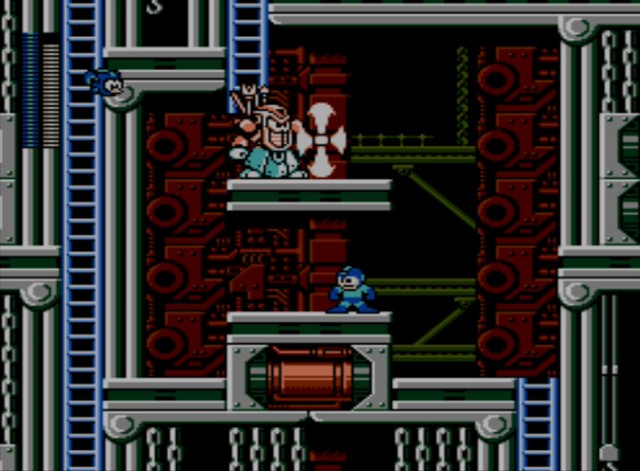 Start by ascending the left of the two ladders that lead out of the room. You can climb to the top of that ladder, two screens up, and snag an easy E-tank. Then you should return to the starting room and climb the ladder on the screen's right side.

Here, you'll need to deal with the spear-wielding enemy that you will have previously encountered during Yamato Man's stage. You can use a variety of techniques to do so, but if you have Beat in your arsenal, that's your best option. Then you should climb the ladder into the next room, which you first visited while collecting the energy tank a moment ago. 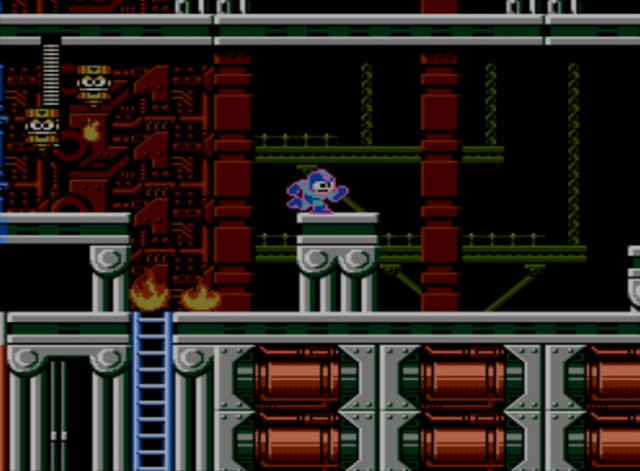 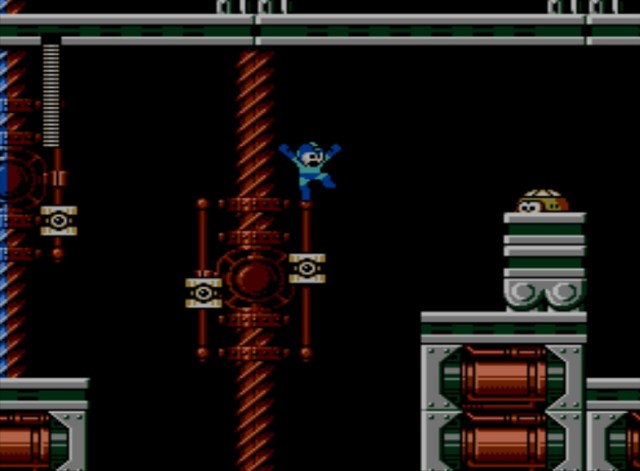 A trio of flying enemies will head your way as you arrive. They like to drop flames from above, but may avoid doing so. However, keep the attack in mind, because you'll be dealing with a lot of enemies of this sort in the treacherous areas to follow.

Head toward the right, and knock the enemy on the next ledge back with a charged shot. Then deal with another flying foe as you climb some steps. Ahead, you'll see some vertical red lines, with blocks positioned on them. These blocks come in pairs. When you hop on the one on the left, the one on the right will gain elevation and the one on the left will drop. It works the other way around, as well. You'll need to negotiate a series of these ledges as you progress, and eventually you'll have to pass over a bottomless pit. Remember to use the physics system to avoid having to take any jumps that might bump your head against the ceiling, and don't move in a hurry. You want to deal with only one flying enemy at a time, when possible. 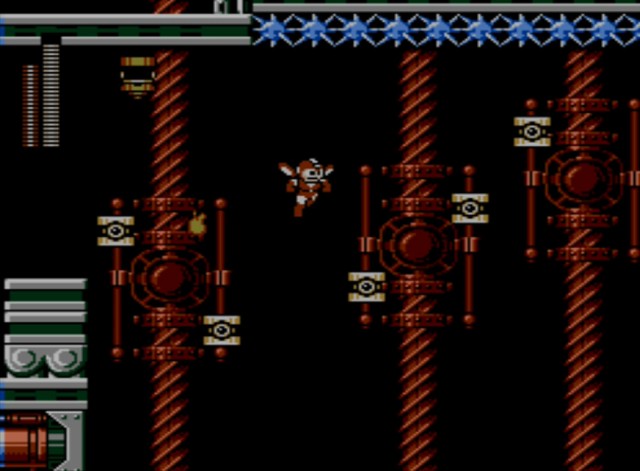 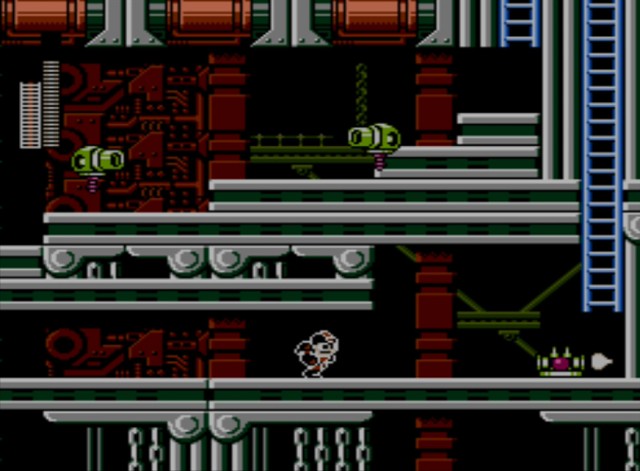 About halfway through the chamber, you'll reach an area where the ceiling is covered in spikes. This is a good time to switch to the jet suit, although it can only protect you somewhat. If you take damage while trying to fly between platforms, you'll likely just be knocked into the pit. Try to avoid taking leaps while enemies are in the way.

Keep moving to the right and you'll reach solid ground. Defeat the enemies there and proceed into the next corridor, further to the right. There are blue blocks along the lower path, and you should break them open using the power suit attack (freeing a sliding enemy in the process) to find the stage's second E-tank. If you don't need it, of course, don't bother. You can take either the upper or lower path through the room, and they will both wind up with you climbing a ladder to another room. 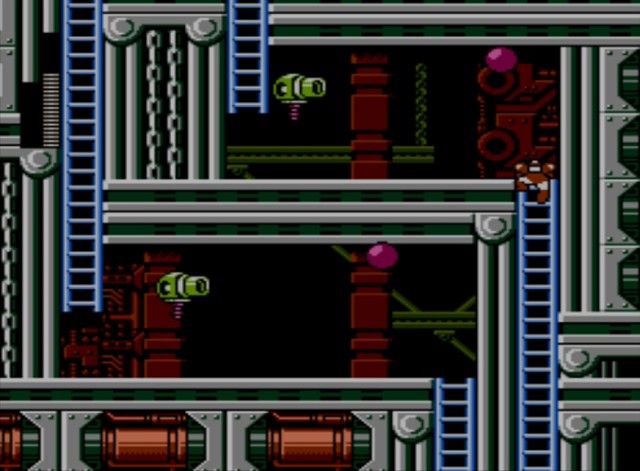 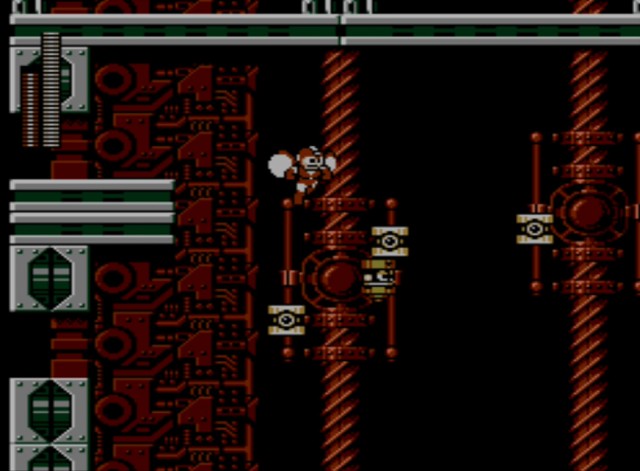 Once you clear that room, which consists mainly of ladders and cannons, you'll arrive at the edge of another lengthy passageway with a bottomless pit and the blocks that rise and fall in pairs.

Again, you should use the jet suit to give yourself a slight edge here, though you'll need to be even more careful than before. In the middle of the area, you can use the power suit to destroy a block and collect some energy. To the right from there, you'll find an enemy positioned on a ledge ahead of the boss door. Wait for him to fire his arced shot, then move quickly past him and through the gate. Otherwise, you might get knocked into the pit at the last moment and that would be a shame.


The B. Attack weapon will serve you well as you face this foe, which fortunately isn't nearly as challenging as the stage he inhabits. You've made it this far, so the fight itself should be a breeze. 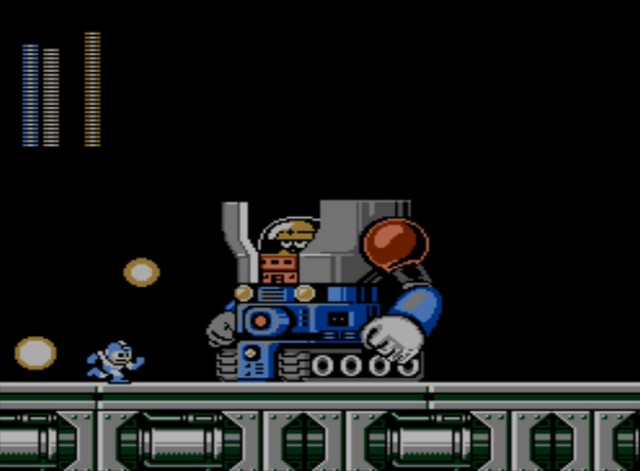 This enemy is a well-protected hardhat foe, who settles into a mobile suit. The suit will move in a way that forces you toward it, and will fire powerful shots directly forward or in a bouncing pattern. However, your special weapon deals enough damage that you shouldn't even have to worry about those attacks all that much.

As the tank is rolling toward you, jump into the air and fire your shot forward. Then retreat and slide under shots or whatever seems best. Give the enemy a second or so to flash and recover, then repeat the process a few more times to net an easy victory. If you're quick, you shouldn't have to use an E-tank and will manage a tidy victory without having to finish him off with arm cannon shots.