This stage, like most within the fortress, will require you to make generous use of the jet suit, so spend a little time getting a feel for how quickly it gives you a boost once you launch from a jump, and how long its effects will last. 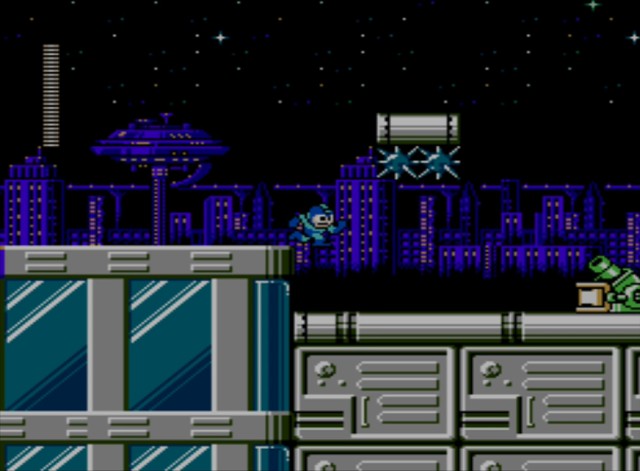 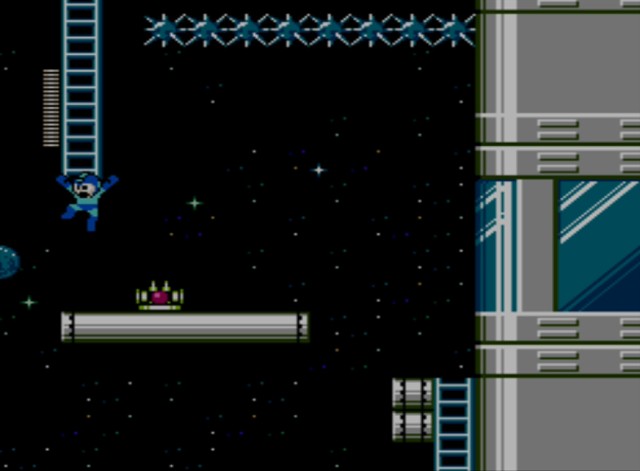 From the stage's start, head to the right. There are batches of spikes hanging in the air, and the shielded green cannons on ledges. The best strategy is to start forward while powering up a shot. Move far enough that a cannon comes into view, then wait for its shield to lift. As soon as it does, unleash your charged shot and jump into the air, in case you're about to be hit by an arced shot the cannon fires first. If you move too far forward too quickly, you'll have to worry about spikes, but the above strategy will avoid that issue.

Once you reach the far right side of the area, past the third of the shielded cannons, jump and climb a ladder. To the left, you'll see a sliding enemy moving along a ledge. Beyond that is a ladder. Wait until the enemy is moving back toward the left, then jump onto the ledge and let the foe reach the far left. As it heads back your way, it will likely do so with a boost of speed, so quickly jump over it and climb the ladder into the next screen. 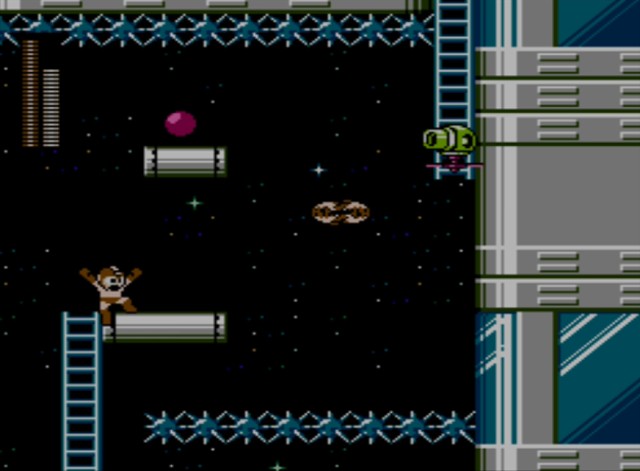 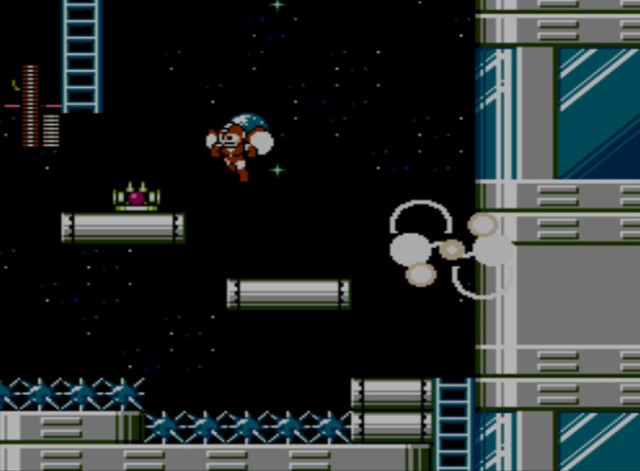 As you reach the top of the ladder, look back toward the right. There is a floating green cannon there. It moves up and down, along the ladder. Stand at the top of your ladder and face right, then throw the Silver T. weapon toward the right as the green cannon reaches its lowest point of descent. It should hit and eliminate the threat. Then you need to use the jet suit. Jump out from the lower of the two ledges along the left side of the screen, and quickly use the jet to fly up toward the upper right. If you wait too long, you'll dip low and hit the fatal spikes, so timing is key. 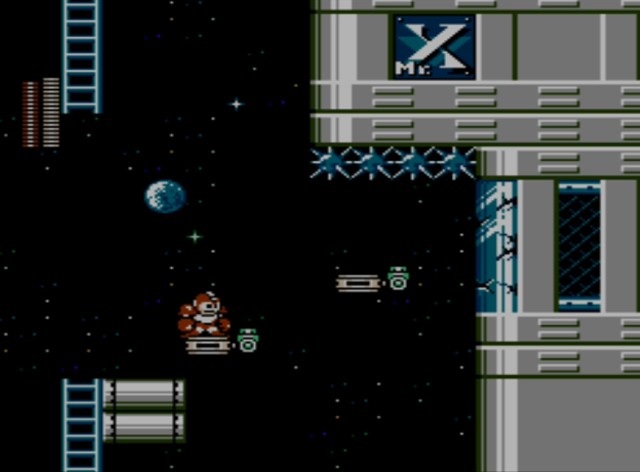 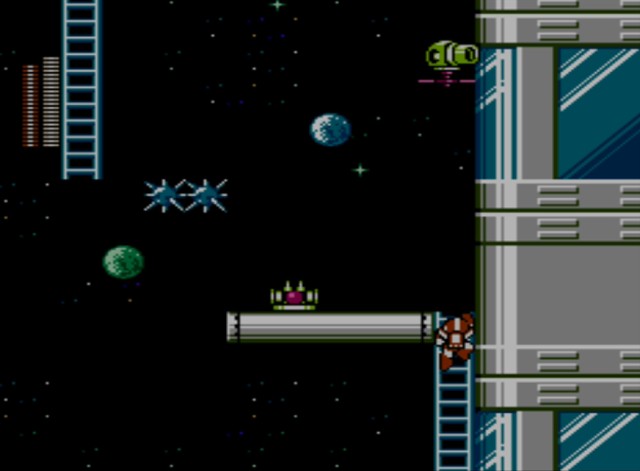 At this point, you should see a cracked glass panel to the right. You can actually break through it with the power suit, but doing so is absurdly risky because there's a row of spikes nearby. To make matters worse, the ledges you can use to reach the weak glass require you to leap, and that's just a recipe for disaster. Supposedly, you can find a bunch of goodies if you take that route, but I suggest just flying up to the ladder overhead and continuing through the stage the more conventional way. You should have everything you need already.

The next screen introduces more cannons. Take them out in the usual manner, then fly over to the ladder and use it to reach the next screen. Now you will see another sliding enemy, and a cannon to your right. You can try flying immediately left, but it's risky. Take out the cannon first, so that it doesn't shoot you just before you reach the ladder (which could cause you to fall to the spikes). Then climb into the next screen. 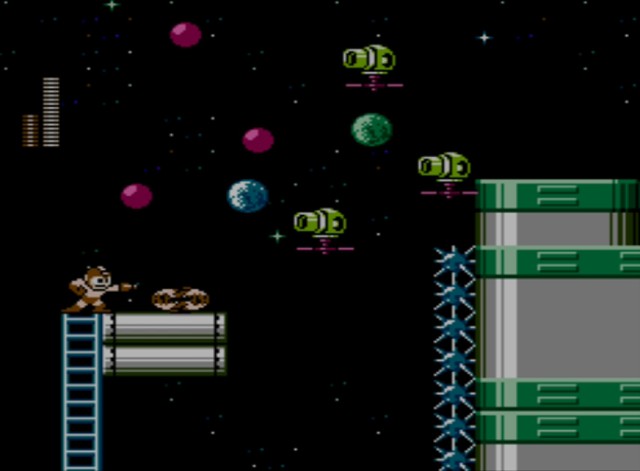 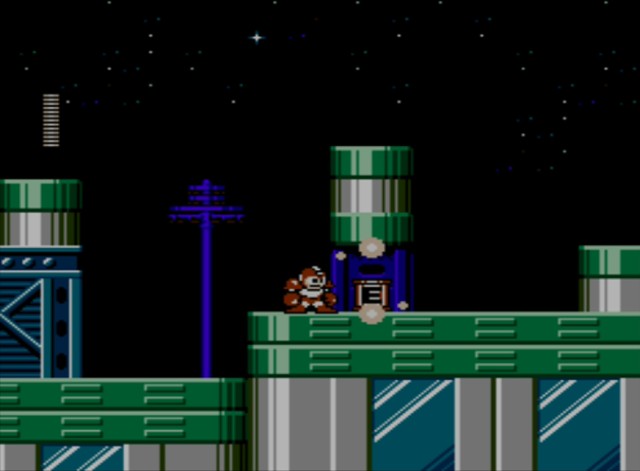 Now you are on a screen with three more cannons. Take them out with more Silver T. attacks, then jump from the platform near the ladder and quickly fly right to higher ground. Once you land, head into the next screen.

In this area, you'll have to run along some ledges while flying enemies and bouncing skull robots come at you from the right. You're best off using the jet to make small flights from one high point to another, and don't forget that you can shoot while flying. Along the way, destroy the weak purple block at the base of one pillar, which reveals a hidden E-tank for your collection. Then approach the opening at the area's far right side. 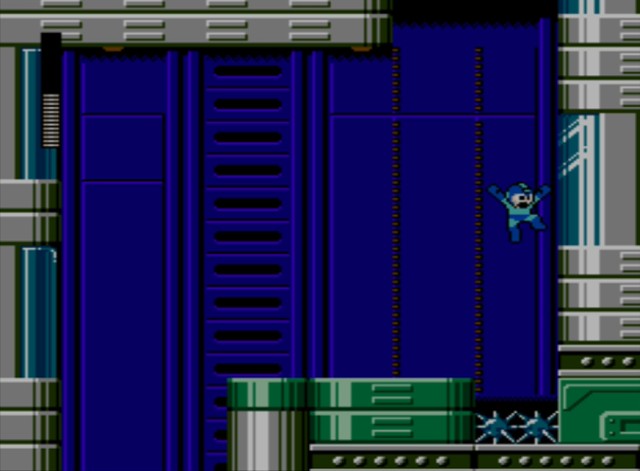 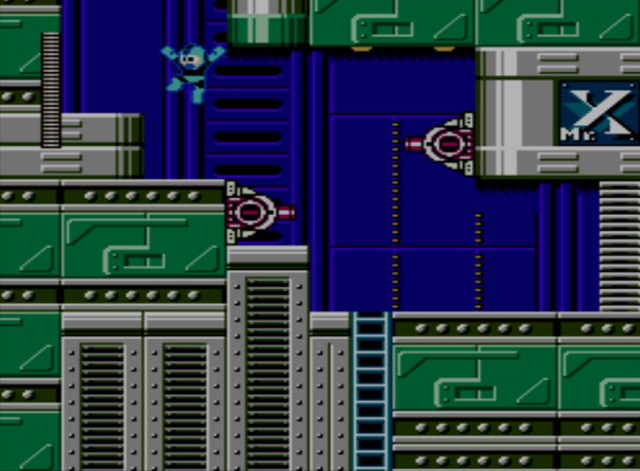 When you drop through that opening, you're going to want to hold left, since the floor to the right is lined with spikes. You can hold left to land safely on solid ground, then drop through the opening further left.

In the next screen, there are two mounted wall cannons. Take out the one to the right first, since it can easily hit you. Then charge up your arm cannon and leap over the one that is positioned at your feet. You can either turn left after that and shoot, or you can simply head right and through the gate to face the stage boss.


The weapon you'll want to use in this encounter is the F. Blast, which isn't necessarily easy to manipulate but which will do some good damage. 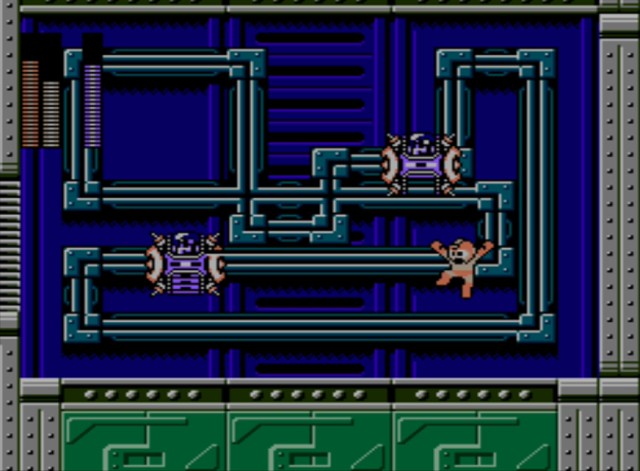 Your enemies are a couple of robotic pods that slide along a winding track. They move quite rapidly, and they also drop miniature bombs as they negotiate the track, so you'll need to keep on your toes. They are weak to your fire attacks only along their left and right sides, and often it's hard to avoid taking damage as you deal some of your own.

You can toss flames on the floor if a pod is headed toward you on the lowest level, and it will take damage as it passes through the brief column of flame that results, but you're better jumping and firing as a pod approaches you along the track one level up, near the middle of the screen. A few direct hits will take out either pod, and then you'll only have to deal with one at a time. If you aim precisely, your special weapon energy should outlast the two pods. Don't be afraid to use an energy tank if you must, since you'll find more of them in subsequent stages.